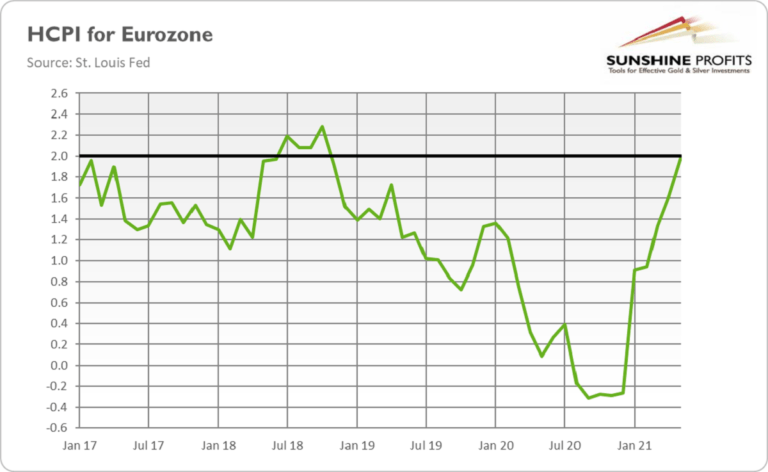 The ECB adopts a new inflation target. Is the European Central Bank mimicking the Fed or doing its own thing? The revolution in central banking is spreading. Following the Fed, the European Central Bank has also modified its target. Last week, after an 18-months review of its monetary policy framework, the ECB published a statement on its monetary policy strategy, deciding to change its goal from “below but close to 2%” to a more symmetric aim of “2% inflation over the medium term”. The most important part of the statement is below:

The Deviations Of Inflation

The symmetry means that the ECB considers both overshooting and undershooting as equally bad. In the previous framework, the ECB clearly believed that downside deviations from inflation were less harmful than upside deviations.

The medium-term orientation means that the ECB accepts short-term deviations of inflation from the target, and acknowledges lags and uncertainty in the application of the monetary policy to the economy and to inflation. In particular, the ECB stated that there might be transitory periods in which inflation is moderately above target. However, similarly to Fed, neither “medium-term” nor “moderately” were defined more specifically.

Another interesting point in the statement is the recognition that “the inclusion of the costs related to owner-occupied housing in the HICP would better represent the inflation rate that is relevant for households”. So far, the ECB only covers costs of rents in the case of tenants. It doesn’t mean that the ECB will start including house prices in its measures of consumer inflation, but it’s a move toward more accurate measures that will better show true inflationary forces operating within the economy.

Last but definitely not least, the ECB emphasized the importance of climate change for price stability, monetary policy, and central banking:

Climate change has profound implications for price stability through its impact on the structure and cyclical dynamics of the economy and the financial system. Addressing climate change is a global challenge and a policy priority for the EU. Within its mandate, the Governing Council is committed to ensuring that the Eurosystem fully takes into account, in line with the EU’s climate goals and objectives, the implications of climate change and the carbon transition for monetary policy and central banking. Accordingly, the Governing Council has committed to an ambitious climate-related action plan. In addition to the comprehensive incorporation of climate factors in its monetary policy assessments, the Governing Council will adapt the design of its monetary policy operational framework in relation to disclosures, risk assessment, corporate sector asset purchases and the collateral framework.

The ECB will adjust the framework guiding the allocation of corporate bond purchases to incorporate climate change criteria, in line with its mandate. These will include the alignment of issuers with, at a minimum, EU legislation implementing the Paris agreement through climate change-related metrics or commitments of the issuers to such goals.

It doesn’t make any sense, of course. After all, as John Cohrane pointed out, “climate change poses no measurable risk to the financial system”. This is because the climate is not likely to cause a sudden, unexpected and enormous economic effect that could endanger the financial system. Climate is not weather – and even sudden natural disasters barely affect the financial system. Central banks should focus on price stability and not engage in achieving social or political goals. The deviations from their traditional narrow mission could only destroy their independence and, thus, their ability to hold inflation under control and prevent big financial crashes.

The ECB’s change is dovish, as it shows that the European central bankers are now more eager to tolerate an overshoot. It means that both the Fed and the ECB started to be more tolerant of overshoot exactly when inflation became higher. What a coincidence! The HCIP for the Eurozone is presented in the chart below. 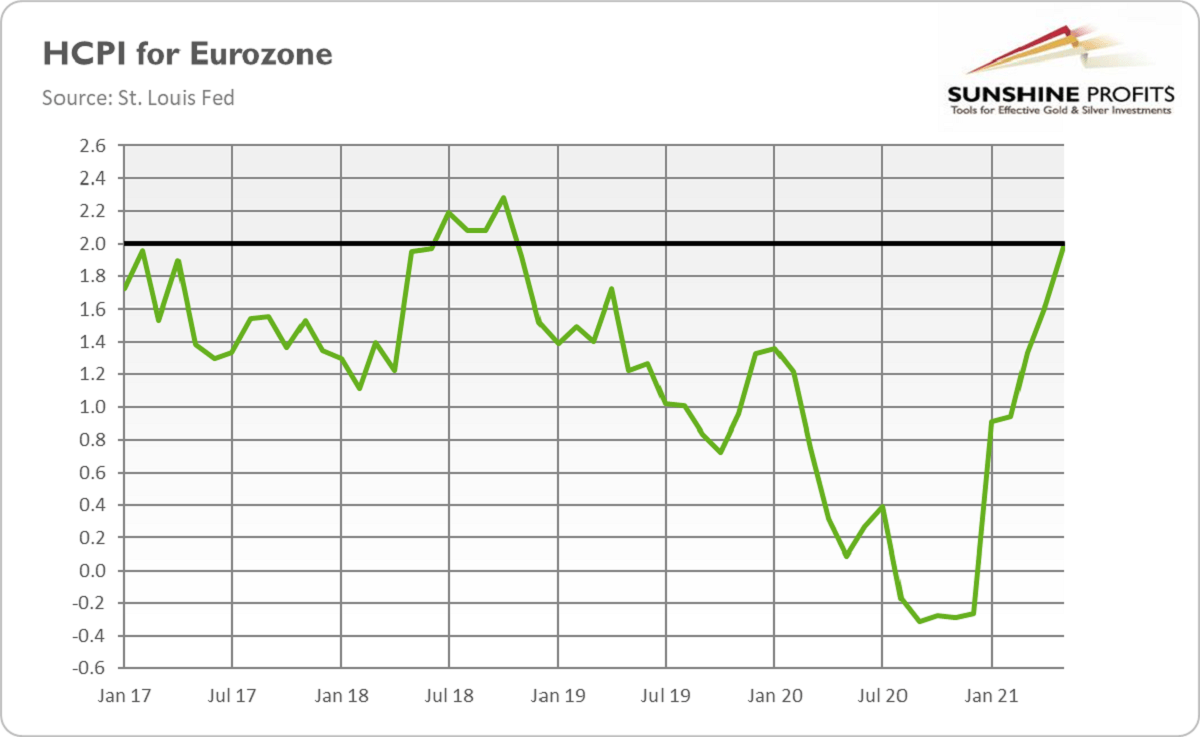 So, the alteration could be seen as fundamentally positive for inflation hedges such as gold. However, the ECB could be less aggressive than the Fed. As Christine Lagarde said during the press conference, “Are we doing average inflation-targeting like the Fed? The answer is no, very squarely”.

On the other hand, a more dovish ECB should translate into a stronger dollar relative to both the euro and gold. But it’s also possible that the change in the monetary framework won’t significantly affect the precious metals, as the ECB is already ultra-dovish and has problems with even reaching the target, not to mention overshooting it.

It seems that gold is reacting now more to the decrease in the bond yields rather than to the changes in the US or EU monetary policies. As long as the interest rates are declining, gold is catching its breath. But this decrease may be temporary, so better watch out! Powell’s testimonies to Congress next week could provide us with more clues about gold’s outlook.