At the end of June, the Basel III accord became binding for European banks. This new set of rules could have an effect on the entire gold market.

On June 28, the Basel III agreement came into force for EU, Swiss, and US banks. On January 1, 2022, it will also be binding for British banks, so I guess it’s high time to cover this issue in the Gold Market Overview.

So, let’s begin by explaining what the Basel III accord is. It is a set of financial reforms that were agreed in 2010 after the Great Recession revealed some “deficiencies” in the global financial system. The name comes from the Basel Committee on Banking Supervision at the Bank for International Settlements, which is based in Basel, Switzerland. The main idea behind the third Basel Standards is to strengthen bank capital requirements in order to limit the risk taken by commercial banks and prevent the replay of the global financial crisis of 2007-2009.

OK, great, the idea of more prudent commercial banks is glorious, but what does Basel III have to do with gold? Well, it turns out quite a lot! First, physical or allocated gold could be treated as a risk-free asset. As we can read in the Basel framework (p. 192), “at national discretion, gold bullion held in own vaults or on an allocated basis to the extent backed by bullion liabilities can be treated as cash and therefore risk-weighted at 0%”.

This reform, if introduced now and analyzed separately, would be bullish for gold, as considering gold a risk-free asset makes it less costly and more attractive for banks to hold. However, the announcement of this particular decision goes back to 2017 and its implementation to April 2019. The chart below shows that this announcement didn’t cause any rally in gold. 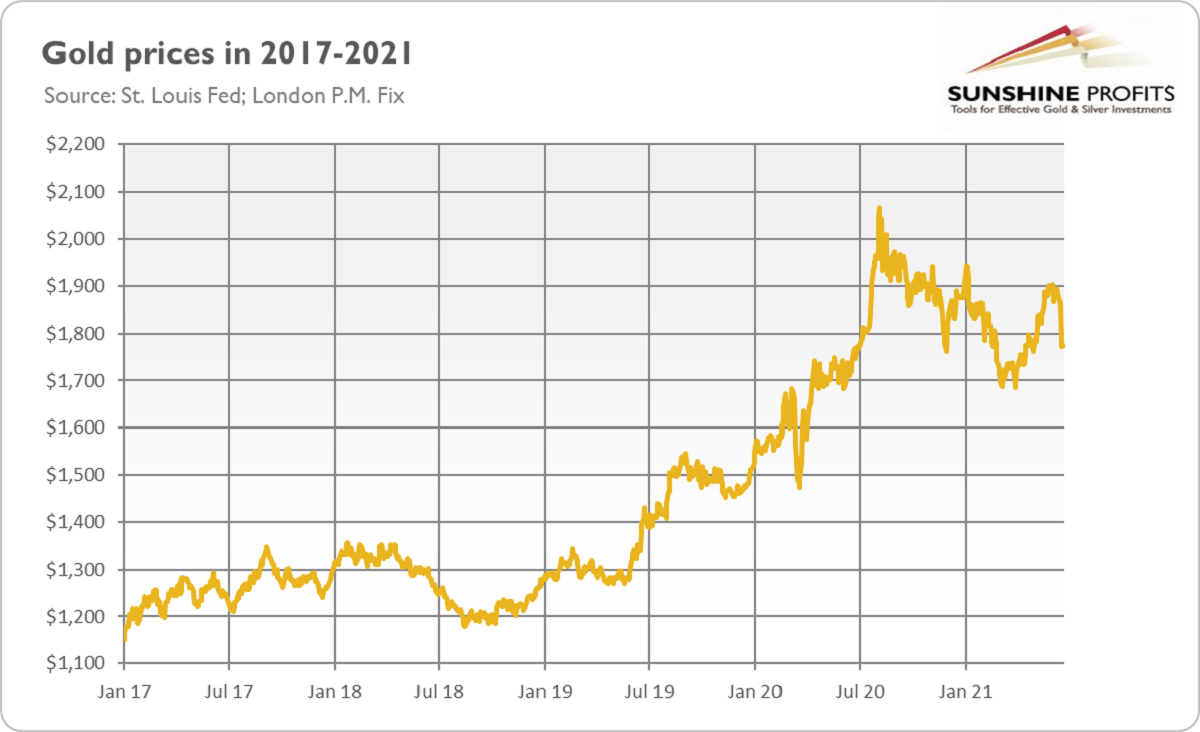 However, now this change will be accompanied by another rule. It’s the Net Stable Funding Ratio requirement, which obliges banks to hold enough stable funding to cover their long-term assets. The key ramification is that this new rule requires banks to have stable funding at 85% of unallocated gold. In other words, the precious metals transactions undertaken by clearing banks have to be backed now in 85% by gold. Or, the reserve ratio has, in a sense, increased from the pre-Basel III level of 0% to 85%. As mentioned in the framework (p. 977), “Assets assigned an 85% RSF [requires stable funding] factor comprise: (…) physical traded commodities, including gold”.

The direct consequences for the banking sector are clear. The handling of unallocated gold will become more expensive, undermining the pre-Basel bullion business model. So, some banks will exit the precious metals market (Nova Scotiabank has already exited it), while remaining clearing banks will be forced to increase the costs they charge or to raise the shareholders’ equity to provide the required reserves.

The indirect effects on the yellow metal are more difficult to predict. Some analysts believe that Basel III will hit the precious metals market, sending gold prices down. The reason is that the new framework makes unallocated gold less attractive, and unallocated gold performs some valuable functions like providing liquidity for gold producers, refiners, jewelry, etc. So, the gold market will become less liquid, which will reduce gold’s attractiveness as a portfolio element for all would-be investors.

In other words, under Basel III, the cost of holding gold on banks’ balance sheets increases, undermining the clearing and settlement system of the precious metals and hurting the part of gold demand that relies on the unallocated gold market.

Will The Basel III Be Bullish For Gold?

However, some claim that Basel III will be fundamentally bullish for gold, especially for physical gold. The reasoning goes as follows: the new regulations will diminish the profitability of trading gold derivatives, reducing the supply of unallocated paper gold. Meanwhile, as physical, allocated gold is a risk-free asset, market participants will move from paper gold to physical bullion, pushing its price higher. As there is – the argumentation continues – price suppression in the paper gold derivatives like Comex gold futures and London LBMA forwards, the significance of physical gold will increase and the true price of gold will rise. In other words, Basel III is believed to cause a liquidity squeeze in the physical metal, which could send gold prices higher.

As one can see, this view assumes the existence of systematic price suppression, which is far from being proven. But we can hold the bullish view without assuming price manipulation. This is because unallocated gold accounts function similarly to fractional reserve banking: banks have only part of gold deposited at them. But now, the reserve ratio is 85%, up from 0%, which means that the supply of unbacked gold positions will have to diminish (or banks will have to buy more physical gold or other risk-free assets to back them). In other words, banks will try to cover their short positions of gold in order to fulfill the NSFR requirement; and the decrease in the supply of gold should increase its price.

However, I suspect that gold bulls’ hopes about Basel III could be exaggerated. It doesn’t have to be a game-changer for gold prices – instead, we could just see fewer clearing banks, higher costs charged by the remaining ones, and lower liquidity in the gold market. Stronger demand for physical gold doesn’t have to transform into a rally in gold prices, as these are shaped in the international ‘paper’ markets.

Additionally, the announcement of reclassification of the risk weighting of gold didn’t make gold skyrocket. The price of gold did start to rally in 2019, but it was quite likely caused by the dovish U-turn of the US central bank. So, the recent regulatory changes don’t have to push gold prices higher, especially if expectations of the Fed’s tightening cycle increase and the real interest rates rise. But maybe later, closer to 2022 (when Basel III finally takes effect in the UK), we will see some upward movement, as most of the unallocated gold is traded on the London gold market.