On May 10th California Governor Gavin Newsom declared a drought emergency in 41 of 58 counties. Climate experts are anticipating one of the worst droughts in history, with temperatures already reaching scorching levels. This is the time of year where California, and a great deal of western America, experience heat wave issues, often in tandem with diminished water levels. 98% of the west coast has been labeled with some level of drought. What is being coined as the ‘Flash Drought of 2021’ is not only affecting the west coast. Currently, 65% of the continental US is facing drought-like conditions (United Nations Office of Disaster Risk Information).

And globally, things are just as bad. Climate change has spurred an onslaught of various extreme weather events. The Intergovernmental Panel on Climate Change (IPCC) has been preparing a report set to release sporadically within the coming months. A draft of the report has leaked, in which many serious warnings regarding the future of our planet are highlighted. It explains that “Life on Earth can recover from a drastic climate shift by evolving into new species and creating new ecosystems… humans cannot” (IPCC). Though it may not be the first that comes to mind, climate change induced drought can be one of the most devastating extreme weather events, with staggering long term effects. 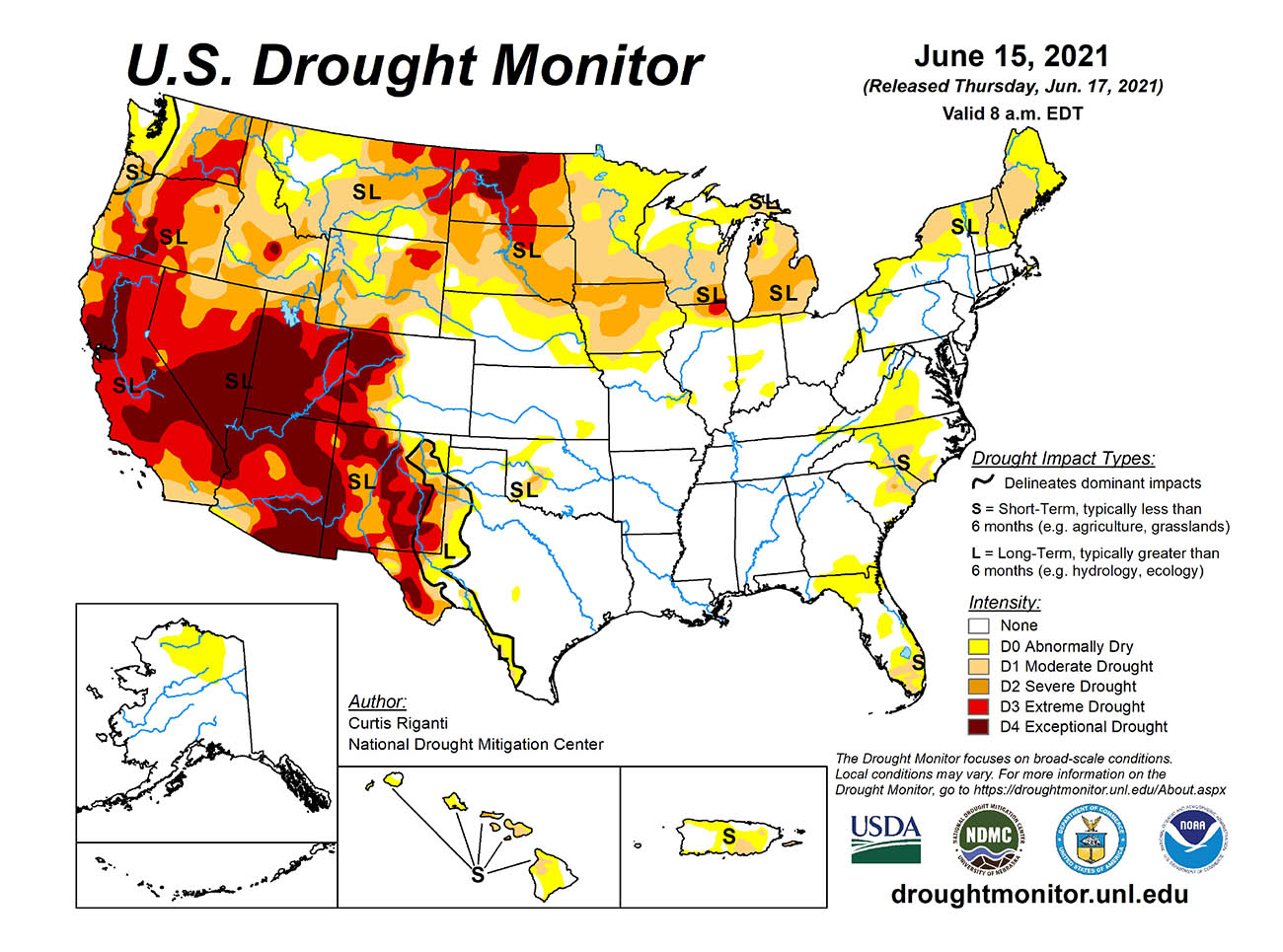 The United States has never experienced such intense temperatures and drought in this area. Local and global businesses stationed in the area are being tested to extremes they have never had to overcome. The supply chains and business infrastructure of many corporations are not prepared for the ensuing effects caused by this environmental stress. “Over the past week, the western United States has suffered through one of the most extreme heat waves it has ever seen this early in the season” (NYTimes). States like Arizona and Nevada have had temperatures reach 115-degrees Fahrenheit. The heat is causing major stress to the electrical grids in California and Texas as well.

Las Vegas, Nevada represented 0.597% of the United States’ $21.43 Trillion 2019 GDP. Their water reservoir, Lake Mead, is reporting its lowest water levels since its inception in the 1930s. This reservoir supplies water for over 25 million people (NYTimes). Lake Mead receives most of its water from the Colorado River, which at 1,450 miles is the fifth longest river in the United States. The issue with Lake Mead is definitely attributable to recent climate change issues, however we as consumers have amplified the intensity. According to John Fleck, the director of the Water Resources Program at the University of New Mexico, “Even without climate change, we would have a problem because we’re taking more water out than the river could provide. But climate change has made the problem much worse by substantially reducing the flow in the river” (CNN). Almond trees, which are typically a 25-year investment, are being ripped out of the ground in anticipation of the intense water scarcity. “California’s more than 69,000 farms and ranches supply over a third of U.S. vegetables and two-thirds of its fruit. The annual almond harvest accounts for about 80% of global production” (Yahoo). This will have staggering effects on not only the U.S. produce market, but the global almond market as well.

The last documented drought on the west coast lasted from December 2011 to March 2019, however many scientists would argue that it never truly ended (The Guardian). In fact, “According to the Special Report on Drought 2021 released by the United Nations Office for Disaster Risk Reduction, the Northern Plains have been in an active drought cycle over the last two decades” (Yahoo). Year after year California has been breaking temperature records, which has further exacerbated the problem. In the past century, California has recorded a temperature increase of three degrees Farenheit, with the global average at just one degree (EPA). As temperatures rise, as does the atmosphere’s ability to hold moisture, leaving less water on the ground for water cycle function. With water levels already scarce, it would not take much for daily life and business practices to be turned upside down by weather change.

Federal and local agencies along the west coast have already instituted water restrictions for residents and businesses with reservoirs in California at 50% average levels (The Guardian). Immediate effects have already set in. “Using data from the U.S. National Centers for Environmental Information, the report noted the extensive harvest failure -- corn, sorghum and soybean crops, including others -- totaled to $34.5 billion in losses” (Yahoo). In addition to this loss in business, since supply is so low for the crops that do make it to market, prices are skyrocketing.

With drought comes an increased risk in wildfires, wildfires that have decimated many of California’s forests. In just the past three years, hundreds of lives have been lost at the hands of wildfires in the state of California (NBC News). With the anticipation of ever-intensifying droughts come the looming threat of an abysmal wildfire season right around the corner. Aside from altering daily activity of many businesses and communities, sadly more lives will be lost due to climate change induced extreme weather.

One proposed solution has been to source water from eastern America, Canada, Alaska, etc. Aside from citizens in these areas feeling as though it is not their problem to solve, scientifically, and economically, the concept is  not feasible, according to Paul Guyer, a civil engineer in El Macero, California. “A project to move a significant amount of water from, say, the Great Lakes or the Mississippi River basin to the Southwest through a system of dams, canals, pipelines and pumping stations would be enormous and stratospherically costly” (NYTimes). It may be too late for an immediate solution, but for the inevitable droughts this area will face in the future, innovative adaptation is very necessary.

Jackson Klein is a current Master of Management student in the Stephen M. Ross School of Business at the University of Michigan. Passionate about the crossover of environmental sustainability and finance, Jackson is focused on how value investing will require major attention to ESG principles in the future. Jackson has internship experience in both asset management and investment banking, and is hoping to begin a career in impact investing upon graduation in the spring.