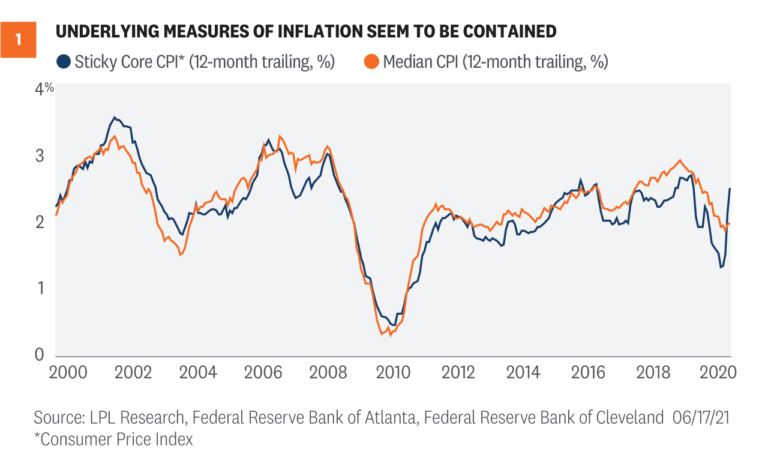 Inflation has been on the rise. Investors are not as interested in what’s happening now as they are in what’s happening next. Meanwhile, the Federal Reserve (Fed) shared its views at the conclusion of its last policy meeting on Wednesday, June 16. And while the Fed’s position that inflation is likely to be transitory has become stronger, not weaker, Fed members have seemingly different opinions on the future path of monetary support.

Inflation has been on the rise. Everyone knows it and feels the impact with every purchase. The Consumer Price Index (CPI) spiked to 5.0% year over year in May, the most since 2008, while core CPI (excluding food energy) hit 3.8%, the highest since 1992. Inflation has been rising and the Fed is watching. How will markets react to any potential inflation over the next year?

We do know this: Markets will be looking forward, not backward. By the time something becomes a “thing,” a meme, or makes a magazine cover, market participants are often past it, as we discussed in our June 16 blog, Why Inflation Worries Likely Just Peaked. Markets are no longer watching to see if inflation will spike. It already has. In fact, since the big upside surprise in the April inflation data, released May 12, many inflation-sensitive assets have been underperforming. Copper? Down. Lumber? Down. The 10-year Treasury yield? Down. Market-implied inflation rates? Down. Gold? Down.

At the conclusion of its last policy meeting on June 16, the Fed shared its view on what may be coming for inflation. In its updated forecasts, the Fed acknowledged it had missed on inflation expectations, upgrading its preferred core inflation forecast for 2021 from 2.2% all the way up to 3.0%. That’s a large jump, but that’s based on what’s behind us. The forecast for the same index in 2022 and 2023 scarcely moved, at 2.1% for both years.

Inflation is certainly still capable of coming in hotter than expected. The difference between now and earlier this year is that inflation expectations are already elevated. In order to see inflation assets really perk back up, we would probably need to see stronger signs that higher inflation may be persistent. To get a read on that, it may be better to look at prices that tend to be more stable. We know there are areas where we’re seeing extreme price moves, which is impacting broader measures of inflation. But what about prices that tend not to move? There is such a measure, developed by the Federal Reserve Bank of Atlanta, called sticky core inflation.

As seen in [Figure 1], unlike CPI and even core CPI, sticky core prices are not setting multi-decade or multi-year highs. Sticky core CPI is up 2.6% year over year. The last time it was that high was…2020. There are still some warning signs though. While you have to be careful annualizing monthly data because it multiplies small, potentially meaningless, moves, annualized sticky CPI in each of the last two months was over 4% and that hasn’t happened since 1992. But even sticky core CPI has had some price idiosyncrasies in the current environment. If you take just the median move of the CPI components, the middle change for any given month, 12-month price changes have actually been declining. And the last two months? Somewhat elevated but nothing special. 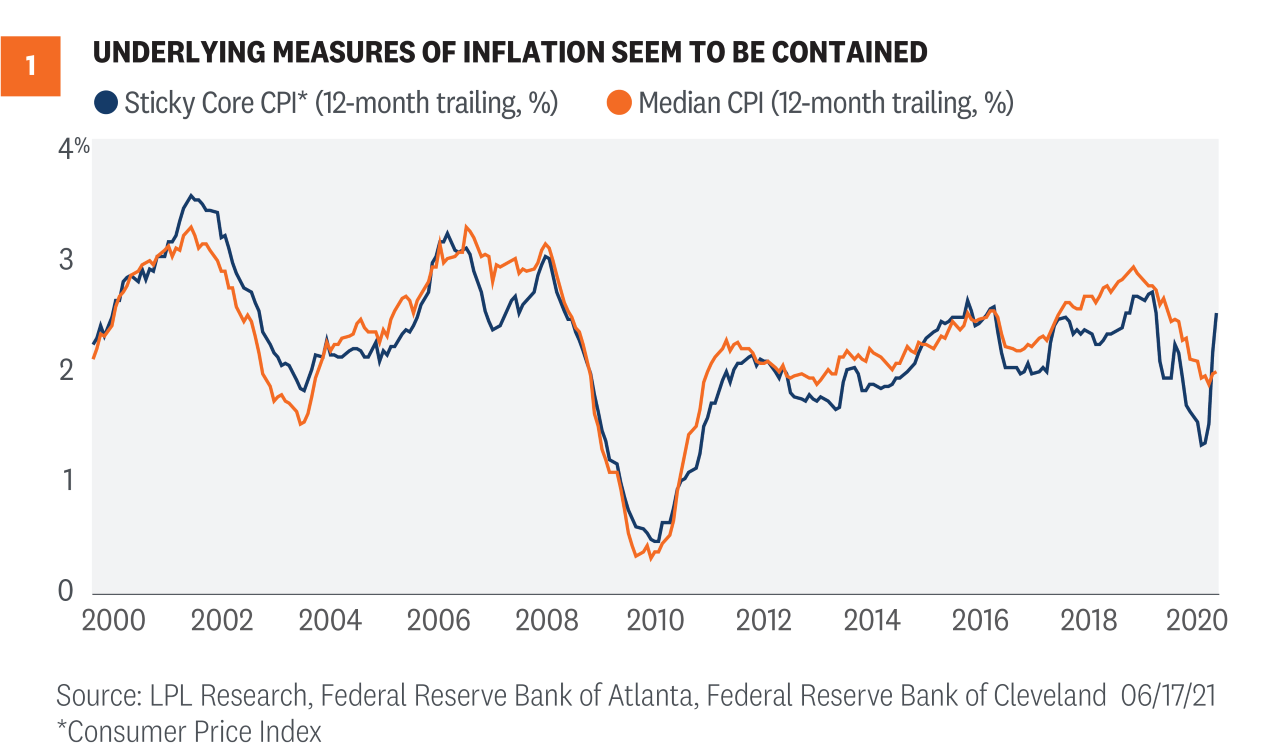 We’ll be watching both sticky core CPI and median CPI to help monitor the likelihood that inflation will become persistent. We do think inflation will be elevated over the rest of 2021—and possibly into 2022—before it really starts settling down, but that’s still consistent with inflation being transitory. And it may remain somewhat higher after that compared to the last cycle as deglobalization and a potentially weaker dollar offset some of the structural forces that we think will continue to weigh on inflation. If inflation does start to look more persistent, it will certainly be felt on Main Street. For Wall Street, the immediate fear wouldn’t be the inflation itself, but rather its ability to force the Fed’s hand and accelerate policy tightening. But, based on how markets have been responding recently, the Fed’s position that inflation is likely to be transitory has become stronger, not weaker.

Speaking Of The Fed

The Fed ended its two-day Federal Open Market Committee (FOMC) meeting last week and, as expected, there were no changes to its current interest-rate or bond-purchasing policies. However, signaling on the future path of short-term interest rates seemingly surprised markets because the number of Fed members who now expect interest-rate hikes in 2023 changed dramatically, relative to the last FOMC release. While an initial rate hike was once thought of as a 2024 event at the earliest, as seen in chart below, the majority of members now expect at least two quarter-point interest-rate hikes to take place in 2023. Additionally, seven members (out of 18) expect at least one rate hike in 2022. 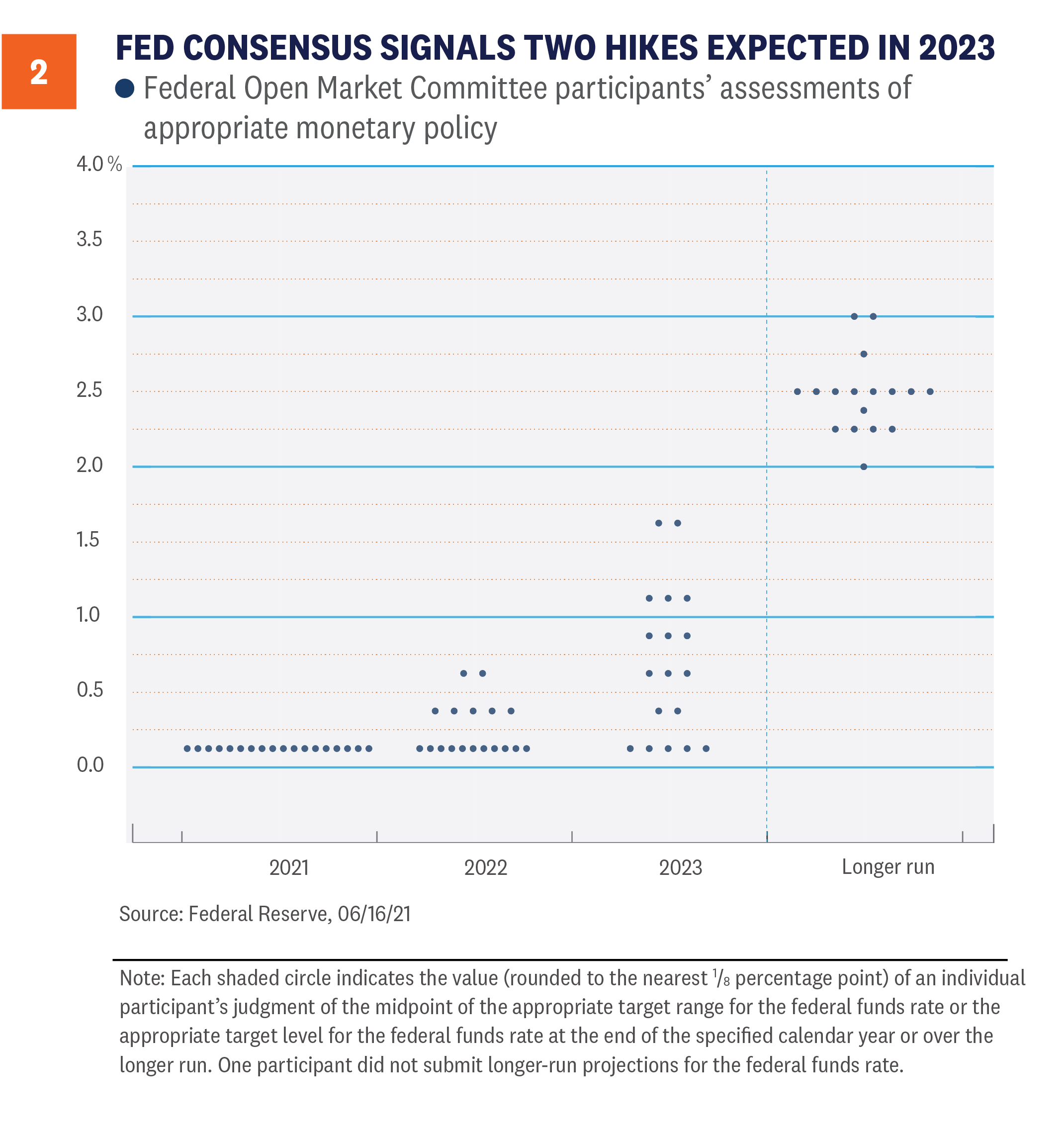 These “dot-plot” projections are not voted on—nor do they represent official policy [Figure 2]. But they do show the divergent opinions by some of the committee members. In fact, the market may have interpreted the changing projections as a shift in the way some committee members are interpreting the Fed’s new Average Inflation Target (AIT) mandate. That some members think interest rates should move higher next year is a notable difference from what some Fed members have repeatedly said: that they want inflation to run above 2% for some time before they raise interest rates.

What Do Hawks And Doves Have To Do With Monetary Policy?

While Jerome Powell is the chairman of the FOMC and likely the most recognizable member, there are 18 other members within the committee (and also one vacant position). Anyone who has been part of a big group setting knows that getting everyone in total agreement is nearly a Sisyphean task. Since 2014, though, there has not been a single dissenting, recorded vote cast by any voting member. However, some recent public comments and the recently released dot-plot may show that not everyone is in total agreement with the direction of current monetary policy. For example, Dallas Fed President, Robert Kaplan, often thought of as one of the most hawkish members of the committee, has repeatedly stated that the Fed should start to reduce or even eliminate its purchases of mortgage securities “sooner rather than later.” Others on the committee, including Powell, continue to defend the mortgage purchases. While Kaplan is not a voting member, he does provide input into policy decisions.

What does it mean to be “hawkish” or “dovish”? Hawkish Fed members are generally concerned about inflation first, and want to start to tighten monetary policy through interest-rate increases and/or the tapering of bond purchases. Doves are those members who want to continue to provide accommodative monetary policy to support the economic recovery. Of the 19 current members, seven can be classified as dovish, eight as neutral, and four as reliably hawkish. Not all 19 current members are voting members. There are currently 11 voting members (there is one vacant voting position) and of those 11, five members are reliably dovish—including Chairman Powell and Vice Chair Richard Clarida—and six members are rated as neutral. So, given the tendencies of the group broadly, the likely cause of the negative initial reaction in the bond market last week is that so many participants now think raising interest rates should occur in 2023. That the overall committee may have become more hawkish is notable. The concern now is that the Fed may speed up the removal of accommodative monetary policy and react sooner than markets are anticipating.

Inflation has certainly been the word of the year. Consumers and investors have seen and felt the impact of inflation. But the structural headwinds that have kept inflationary pressures at bay for decades are still in place. We do think inflation will be elevated over the rest of 2021 and possibly into 2022 before it really starts settling down, but that’s still consistent with inflation being transitory. How the Fed reacts to the data will be interesting, though. We continue to watch closely the risk associated with the Fed acting out of concert with what markets are expecting. Over the next few weeks we’re likely to hear from a number of Fed officials, so we’ll get more clarity on how thinking has changed recently. As such, it will be important to see who on the committee has become more hawkish. If it’s actual voting members, then markets may start to get more concerned.