Research by bitFlyer indicates the growing popularity of cryptos in America as 30% of the participants considered Bitcoin or other cryptos as a household investment option.

bitFlyer, a Tokyo-based crypto exchange, released a research report that explores the investment trends in Japan and the United States market.

Investments Across All Financial Assets

The major difference between both countries was the outlook on investing in 2021. While 62% of Americans said they wanted to invest a portion of their net worth this year, 82% of Japanese participants didn’t have any plan to invest in any financial asset.

The chart demonstrates how the two markets are poles apart in terms of investment. In the U.S., only 18% of people have not invested in any asset while the same number in Japan is 69%. The research also found that in both countries, men were more interested in investments than women and were more likely to allocate a larger amount.

People interested in investing prefer it so as to prepare for the future and increase their long-term net worth. Most participants highlighted that they want to diversify their income through different investment vehicles and believe that it is the most powerful way to grow their net-worth. Even the low-interest rates on investments are also luring people to consider allocating a part of their worth in financial assets.

In its research, bitFlyer also found that 40% of people with low income were less likely to invest. The U.S. participants who are not looking to invest shared that the Covid-19 pandemic led to the fear of what's going to happen next at the macroeconomic level. Interestingly, many American respondents shared the main reason for not investing in assets is the lack of resources rather than the risk of losing money.

However, in Japan, most participants don't plan to invest as they consider it a potential risk rather than due to any lack of resources. The pandemic also had some impact on the investment potential of Japanese respondents.

There is clearly a higher crypto adoption rate in the U.S. than in Japan. 15% of U.S. participants said they were currently invested in cryptocurrencies, and about 7% had used them in the past. Also, over 39% were interested in cryptocurrencies but have never used them. Comparatively, only 5% of respondents in Japan said they had ever invested in a digital asset, and over 15% were interested but never used it.

People with a positive outlook toward cryptocurrencies in both countries said that their growing interest is due to the recent exponential growth of the digital assets. It has led them to believe in the long-term value of crypto along with its value propositions. Another reason participants stated was the growing interest and adoption of institutions in cryptos, which solidified their perception about digital assets.

Those who do not consider cryptos as an investment mentioned that they still fear the extreme price swings of cryptocurrencies. Besides, recent hacks and negative reporting by mass media also made them cautious of cryptos' security risks. To add to that, a huge population is still not aware of what cryptocurrencies are, and this inadvertently changes their perception of them.

Cryptos are the Fourth Most Popular Investment Asset 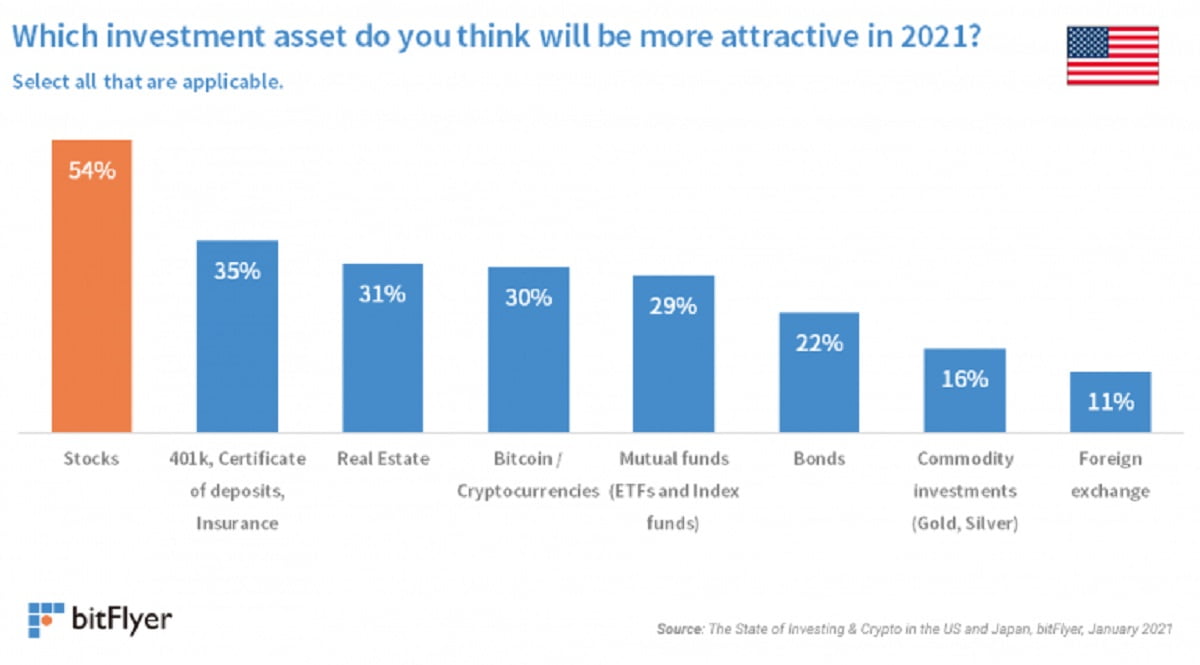 Out of 3000 respondents, 54% said they considered stocks as an attractive investment this year while 35% favored 401k, Certificate of Deposits, and Insurance. Over 30% of participants consider cryptos as a favored investment vehicle in near future, making it the 4th most popular asset and two times more popular than Gold. This is a great response toward crypto investments, considering the industry is still in its nascent stages. The response shows that crypto is finally making its way into the deeper ends of the population.

While researching different segments, bitFlyer also found out that highly experienced U.S. investors consider cryptos as the third most popular investment vehicle. They shared that the recent bull run observed by the market makes crypto a profitable investment. Whereas investors with the least experience consider cryptos the second most popular investment, and they are very much looking forward to capitalizing on the emerging crypto trend.

Indubitably, the perception of Americans toward cryptocurrencies is more accepting compared to that of Japan. Most of the American respondents are looking to invest in 2021 since they view investing as a powerful way to grow their wealth. Whereas, in Japan, investors are more conservative when it comes to investing in a financial asset, especially cryptos.

This growing interest of Americans could be attributed to the adoption of cryptocurrencies by major American companies. Now that Tesla and BNY have also entered the crypto market, the year 2021 looks very promising for this new asset class.