Whitney Tilson’s email to investors discussing that his brithday wish is for his readers to get vaccinated. He also disccuses how he qualified, if a booster shot really make a difference, how you can get a booster and which booster you should get. 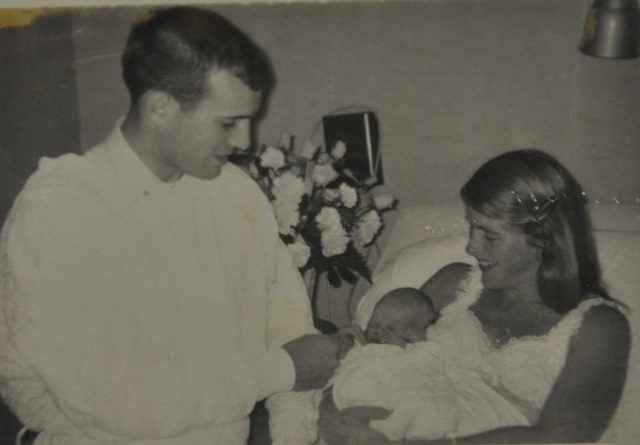 For my birthday today, I wish every one of my readers would get a vaccine or booster to reduce the chances of getting COVID-19, which is still killing nearly one American every minute!

A Reward If You Get Vaccinated

To encourage this, here's what I'll do for you: If you get any kind of COVID-19 vaccine in the next week, e-mail me a photo of it at [email protected], and I'll send you a PDF of my new book, The Art of Playing Defense. The book's theme is avoiding calamities that can ruin your life – and it's hard to think of a more dangerous (and unnecessary) one than getting COVID!

I continue to closely follow the pandemic and send periodic updates to my coronavirus e-mail list (which you can sign up for by sending a blank e-mail to: [email protected]).

Here's the e-mail I sent to that list (plus many others) on Saturday...

I just got my Moderna Inc (NASDAQ:MRNA) booster on Friday and feel great – I've had no symptoms whatsoever. 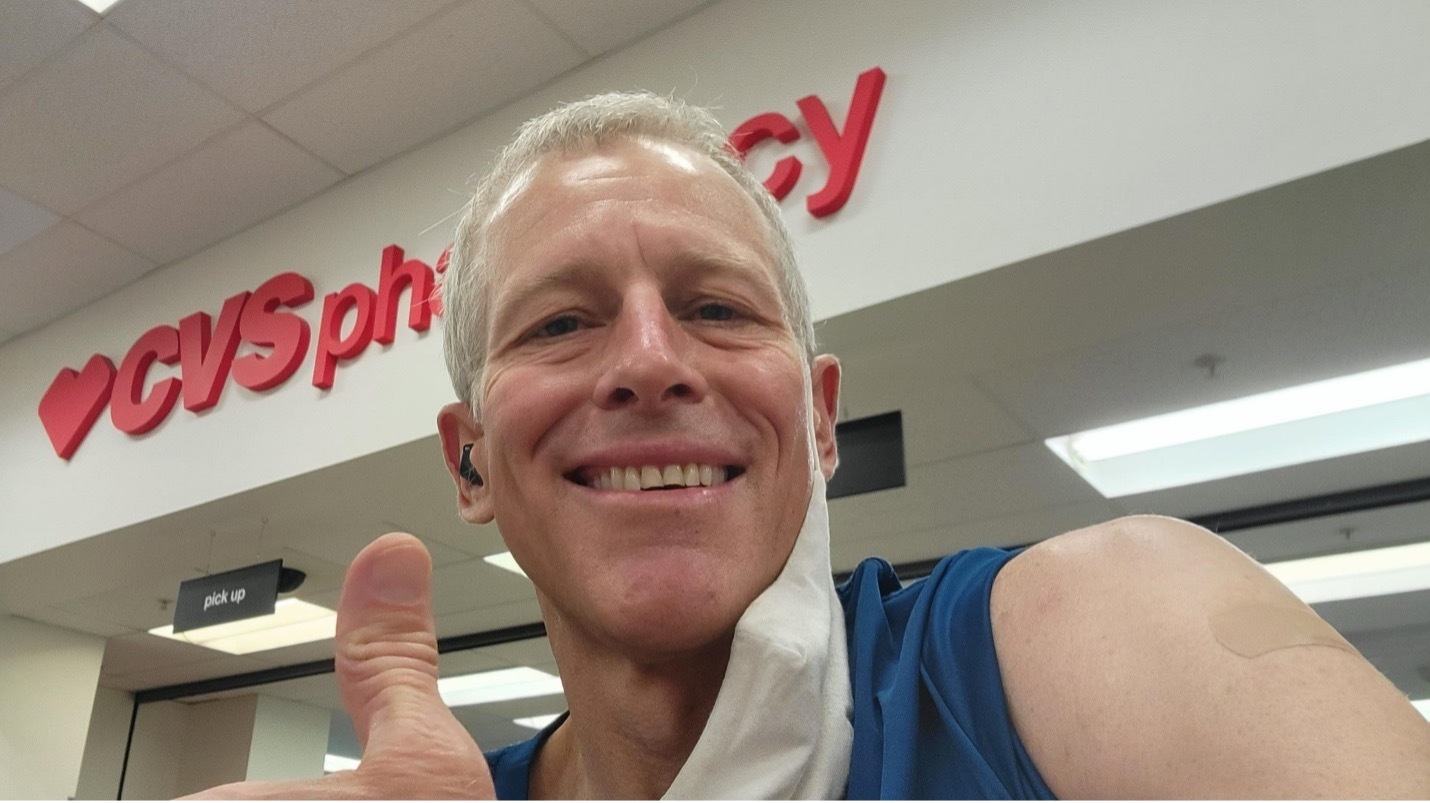 I was eager to get the booster for a variety of reasons:

1) Though the Moderna vaccine that I received appears to be holding up better than the others, I'm still concerned about the many data points regarding the waning efficacy of the vaccines. (This isn't an indictment of the vaccines – it's simply that, like the flu vaccine, we'll likely all need to get them at least once a year.)

2) I'm well beyond the six-month mark, as it's been nearly eight months since my second shot on March 5.

3) I'm super exposed: I've been traveling nonstop. I just came back from a three-day conference in Las Vegas during which many folks weren't masked (and I'm sure some weren't vaccinated). I'm doing the 24-hour World's Toughest Mudder: Laughlin in a week from Saturday, where there will be a ton of close contact with unmasked strangers, pulling other participants over obstacles, etc.

To answer the questions many of you may have:

Question 1: How Did I Qualify?

Answer: Because I'm "Age 18-plus who work or live in high-risk settings." (My work requires me to travel and be in crowded, unmasked, indoor settings.)

That said, if there were a shortage of booster shots and elderly and/or immunocompromised people weren't able to get them, then I would have waited. But we have the exact opposite problem in the U.S. right now: We're drowning in vaccines – both initial doses as well as boosters – and too few of us are willing to take them!

I not only think I'm doing the right thing for myself but also for my country and fellow citizens by getting the booster because it reduces the chances that I get a breakthrough infection. If that happened, I'd likely be fine given my good health and prior vaccination. But I worry about infecting others (only 65% of all Americans are fully vaccinated... that includes 74% of New Yorkers, but only 61% of Nevadans, where I just came from and will be flying back to in 12 days).

Here are the Centers for Disease Control and Prevention ("CDC") guidelines on who qualifies for a booster: 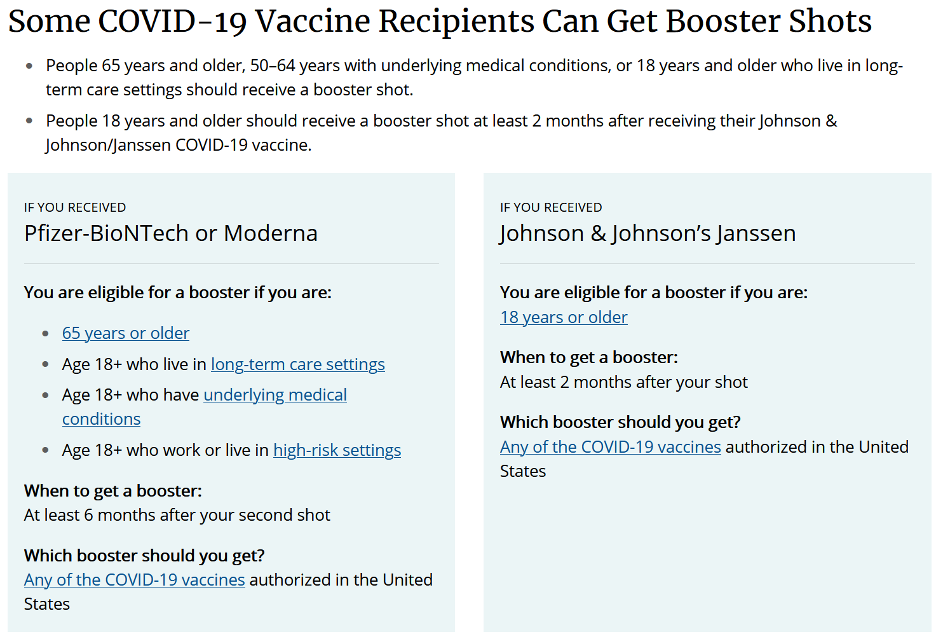 Question 2: Does A Booster Shot Really Make A Difference?

Answer: Yes! The best data on this comes from Israel, which is small (population around nine million, slightly more than New York City), and has a centralized health care system (so it can track data well). It was one of the first countries to widely vaccinate its citizens (60% of its population had received one dose of the Pfizer Inc. (NYSE:PFE) vaccine by April 5).

The vaccination campaign stalled. Today, however, only 71% of the population has received the first dose and the efficacy of the vaccine appeared to fade, which resulted in Israel's third wave of cases that started ramping up in July, as you can see in this chart (source):

Sure enough, the number of deaths per day followed about two weeks later (though not to the same degree, as the vaccines and better treatments resulted in a lower mortality rate):

So Israel embarked on a massive booster shot campaign – the first country to officially offer the third dose – on August 1, initially rolling it out to those age 60 and older. It then gradually dropped the eligibility age, eventually expanding it to everyone age 12 and up who received the second shot at least five months prior. Within six weeks, nearly three million Israelis had received the third dose.

The scientific data showed that the booster had a big effect on the body: Israeli research: 3rd vaccine dose produces 10 times more antibodies than 2nd.

More importantly, as you can see in the charts above, after the booster campaign, the number of cases and deaths quickly plunged back to near zero, resulting in a headline like this: 'It's Like There's No Covid': Booster Shots Bring Tel Aviv Back to Life.

Question 3: How Can You Get A Booster?

Answer: I'm sure there are many ways, and the answer will vary by city, but I simply went to the CVS Health Corp (NYSE:CVS) and Walgreens Boots Alliance Inc (NASDAQ:WBA) websites, filled out some information and found plenty of pharmacies near me offering boosters.

However, most only had the Pfizer booster, and I wanted to stick with Moderna (see Question 4 below), so there were fewer options. I was able to book an appointment six days in advance at the CVS inside the Target Corporation (NYSE:TGT) store on 700 Exterior Street in the South Bronx, just over the Madison Avenue Bridge, near Yankee Stadium. (I live on Manhattan's Upper East Side, so it was an easy 15-minute bike ride for me.)

My friend, who initially got the Moderna vaccine, but was happy to take the Pfizer booster, booked an appointment on Saturday morning and got the shot that afternoon!

The Museum of Natural History is giving out all three vaccines, and no appointment is necessary. You can make an appointment here if you want, but you don't have to. I just showed up at about 4:15 p.m. last Wednesday and only had to wait about 45 minutes.

Question 4: Which Booster Should You Get?

Answer: Here's a New York Times article discussing this: Should I Mix or Match My Booster Shot? And here's a Bloomberg story on it: Should I follow Pfizer with a J&J booster?

The short answer is that there's no definitive study favoring the Moderna over the Pfizer booster, but both appear better than the Johnson & Johnson (NYSE:JNJ) one, according to the Bloomberg article:

I chose the Moderna booster over the Pfizer one because the vaccine is performing slightly better according to this chart in Thursday's New York Times of breakthrough cases and deaths among the vaccinated (it should also scare the pants off of anyone who's not vaccinated!):

There is some evidence that there's a benefit to mixing the vaccines because they work slightly differently, which has two implications:

1) I would suggest that someone who initially took the Pfizer vaccine to get the Moderna booster.

2) I wouldn't argue with someone who initially got the Moderna vaccine and decided to get the Pfizer booster (though I didn't).