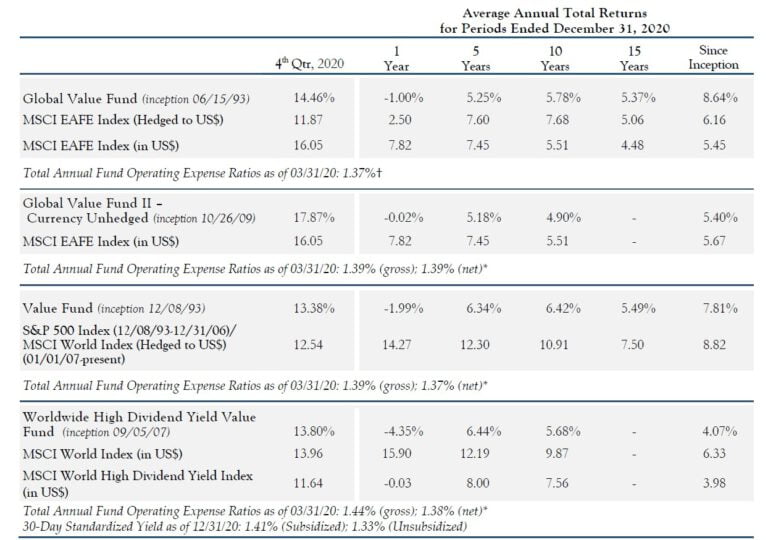 The cork came off of the champagne bottle in public equity markets during the fourth quarter as vaccine approvals propelled many market indices to new all-time highs, a remarkable achievement in light of the challenges of the last nine months. Proponents of value investing were particularly encouraged as the vaccine news ignited a powerful rally in so called “value stocks,” which in the past have often performed relatively better than their growth counterparts during a robust economic recovery. Many market observers are expecting just such a recovery on the heels of the vaccine roll-out in the coming year. International equities which have also trailed U.S. equities for the better part of the last decade also awakened from their slumber and out-performed their U.S counterparts for the quarter. One cannot help but wonder whether these 4th quarter results are foreshadowing the beginnings of a rotation from all things technology into more value and internationally oriented securities. The Tweedy, Browne Funds did not disappoint during the quarter with each of the four Funds producing strong double digit returns. 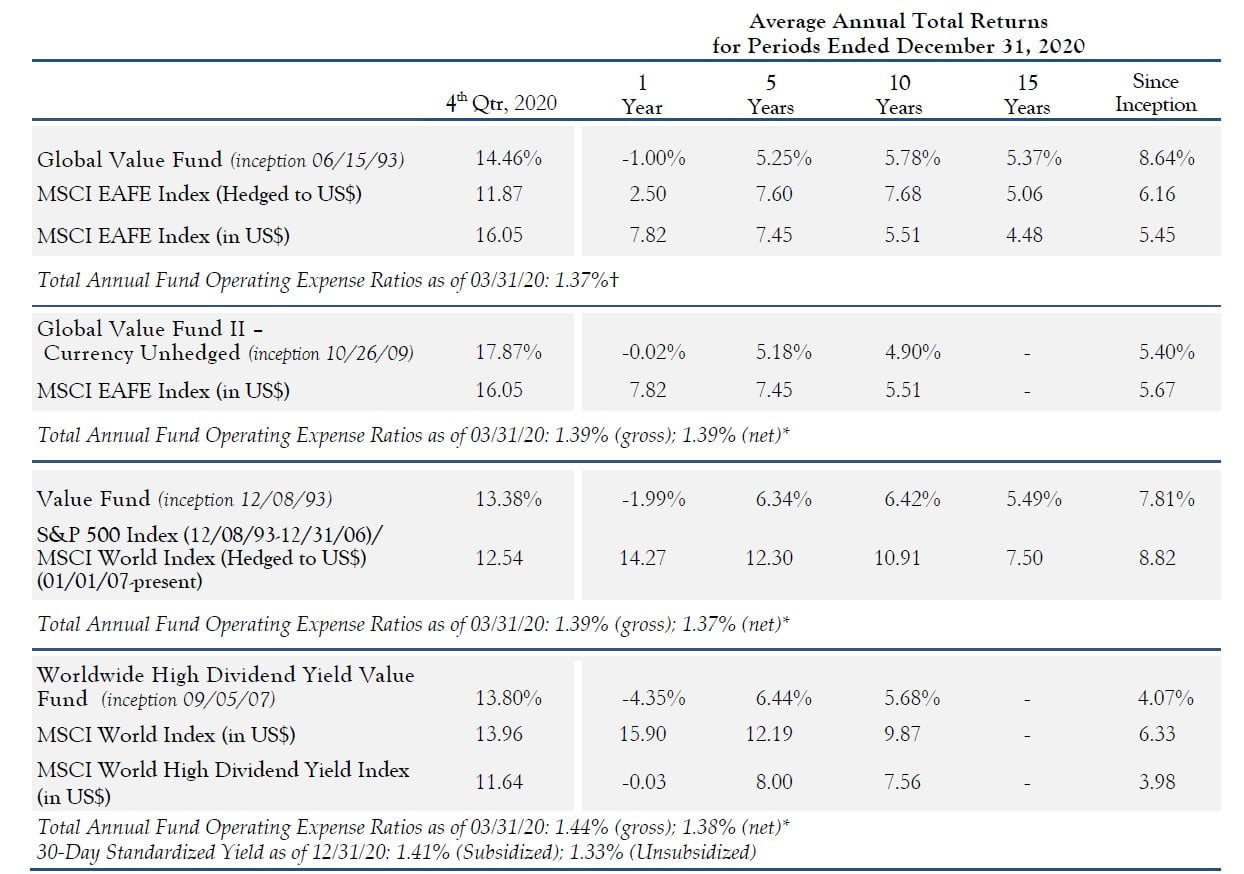 Pfizer’s announcement in early November that its COVID vaccine had proven to be 95% effective served to turbocharge returns for global equity markets for the month and quarter. Value stocks, in particular, were beneficiaries of the good news, as the prospects for a receding virus helped to fuel expectations for a strong economic recovery sometime in 2021. In our Fund portfolios, this translated into strong returns in industrial, financial, communication services, consumer discretionary, and materials holdings. This included good results in machinery and aerospace companies such as CNH and Safran; interactive media holdings such as Alphabet (Google) and Baidu; bank and insurance holdings such as DBS Group, Standard Chartered, CNP, and Zurich Insurance Group; auto-related businesses such as Autoliv, Michelin, and Yamaha Motor Co.; and materials holdings such as BASF and Sol SpA. We also had strong returns in beverage companies, Coca-Cola FEMSA and Heineken, and in our last remaining pure oil & gas holding, Total. All of these companies and a host of others enjoyed robust double-digit returns during the quarter.

While most of the Funds’ holdings performed extraordinarily well during the quarter, there were a few that disappointed, including several of our pharmaceutical holdings such as Glaxo, Astellas Pharma, and Roche. We also had poor returns in a number of our consumer staples holdings including Nestlé, Henkel, and Unilever.

As mentioned in the beginning of this report, international equity returns were quite strong during the quarter. This included double-digit returns in most of the Funds’ European holdings which, like value stocks, have tended to benefit from the prospects for a strong economic recovery. European markets tend to have many fewer technology companies and more exposure to older economy companies such as banks, auto-related enterprises, consumer products companies, and pharmaceutical companies. So if value stocks do make a comeback in 2021, as the quarter’s results may be suggesting, we would hope that this might prove beneficial for the Funds’ European holdings, particularly if Europe gets a strong, vaccine-led economic bounce off what has been a deeper bottom for their respective economies.

Despite increasing equity market valuations during the quarter, we remained quite active in terms of new additions to our Fund portfolios. Newly established positions included Conzetta, the small Swiss industrial conglomerate, which the Funds have owned in the past; Enterprise Products, the U.S.-based oil & gas pipeline company; Rubis, the French gas distribution company; Megacable Holdings, the Mexican cable (telecommunications) company; Alten, the French engineering services company; Fukuda Denshi, the Japanese medical products company, which the Funds have owned in the past; Kamigumi, the Japanese port operator; Chinese property management company, A-Living; and Alibaba, the largest e-commerce company in China. At purchase, all of these companies were trading at significant discounts from our estimates of their respective intrinsic values, had strong balance sheets and, in our view, attractive growth prospects. Several of them are small and mid-sized companies, had owner earnings yields (net operating profit after tax/enterprise value) in the 7% to 8% range or higher, were buying back or had plans to buy back a significant number of shares and, in many of the companies, corporate insiders were buying shares at prices at or around what the Funds were paying.

We also added to a number of positions in the Funds’ portfolios, including Alliance Global, Astellas Pharma, CK Huchison, Dali Foods, and Intel.

The markets’ strong advance during the quarter allowed us to sell or reduce our remaining shareholdings in a number of companies that had either met our valuation targets or had disappointed, or whose future prospects had, in our view, become compromised. This included Chokwong Paint, Mediaset, Royal Dutch, and HSBC, among a host of others.

Rubis, a French company predominantly active in emerging markets, was purchased in all four of our Funds during the quarter. The company distributes fuels for vehicles, airplanes, home heating, cooking, and power generation as well as bitumen for road construction and lubricants. They are active in 41 countries and this number is expanding. The activities are largely focused on the Caribbean and East Africa, which together make up roughly 85% of their business volume. The economic model is based on superior and dominant logistics, a musthave product for which there are few available local alternatives, and high market share in small markets with limited competition. As a result, many of their end markets are islands. By way of illustration of Rubis’ approach, the company owns a 71% stake in an oil refinery in the Caribbean, from which it transports refined products with five owned and operated ships to various islands. Rubis controls the whole distribution chain: the refinery, the ships, the local transportation of fuels, and the gas stations. This kind of set-up is difficult to compete with.

Demand for Rubis’s products is underpinned by the fact that in many of their markets, competition from gas and electricity distribution networks is weak or non-existent. As a result, many companies and households in their markets generate their own electricity to run offices, factories and homes, or have back-up generators at the ready. Many people cook and heat their water on liquified petroleum gas (“LPG”) from a tank; there is no alternative.

Fuel for cars is the company’s biggest business, and Rubis operates more than 1,000 gas stations under the Rubis brand in the Caribbean and East Africa. Rubis is often the dominant brand on Caribbean islands, and in East Africa the same position is emerging. Financial results in 2020 were somewhat challenged by the pandemic; the company has forecasted its underlying EBIT to be down around 12% versus 2019, mainly because of aircraft fuel weakness. However, the longer-term outlook for growth, especially in Africa, where they benefit from population growth, urbanization, motorization, and a growing middle class, is good. Rubis also expands by acquiring businesses within logistical reach that have the same economic characteristics that the existing businesses have: small markets, geographical/logistical isolation, and strong market power.

Rubis is committed to a transition to cleaner and transitional fuels such as LPG, which in Africa in many applications competes with coal. The company has introduced energy efficient heat pumps, LNG, and biofuels, in addition to using hydrogen out of its Caribbean refinery to generate electricity in fuel cells. There are solar panels at the refinery. We find Rubis to be a sensible and forward thinking energy distributor committed to providing energy for as many people as possible in their markets, thus contributing to economic growth in places where it is vitally needed to help raise people out of poverty.

Using a cautious 13 times enterprise value to 2021 EBIT to value the business, at purchase Rubis was trading at a significant discount to its appraised intrinsic value. The company is in a net cash position, and traded at a forward price earnings multiple of 12.3 times 2021 estimated earnings per share. The dividend yield was approximately 4.7%. In early December 2020, the company voted to buy back EUR 280 million worth of shares (7.4% of the market cap at the time) over 18 months, and has since started buying. Finally, there were two insider share purchases by Hervé Claquin, a member of the company’s Supervisory Board.

As you may recall, in our recent letter to shareholders that accompanied the Funds’ Semi-Annual Report, we reported that Will Browne, a partner in our business for 42 years, who maintained positions on our Management and Investment Committees, had decided to take a step back. Will withdrew from those positions effective January 1 to become a Senior Advisor to our Investment Committee. As he has said, he will now be able to focus entirely on the part of the business he enjoys the most, the investment process. You can read his announcement here. Will made an immeasurable contribution to our firm during his 42-year tenure, and we are looking forward to many more years of his advice and counsel.

In addition to Will Browne’s announcement, the Management Committee of our firm made some additional appointments just prior to our penning this report. Jay Hill, one of our Managing Directors and a member of the Investment Committee, was appointed to join Tom Shrager, John Spears, and Bob Wyckoff as a member of the Management Committee; and Sean McDonald, one of our analysts, was promoted to Managing Director and has joined the Investment Committee. Both Jay and Sean are long-time employees and equity stakeholders in our firm. They are both extraordinarily capable security analysts, clear thinkers, of impeccable character, and day-in and dayout exhibit the requisite temperament necessary for success as value investors. You can read Jay and Sean’s biographies here.

As we head into the new year, we are grateful for the rapid recovery of equity markets and, in turn, our Fund portfolios off their previous March 2020 lows, and are looking forward to the possibility of better relative returns for value-oriented securities. Many market observers believe that value has never been cheaper in its long history relative to growth. And technology has never been more ascendant, except perhaps in 2000. With speculative fervor afoot in markets, particularly when it comes to all things technology, we take comfort in the businesses that the Funds own, which for the most part (in our view) enjoy strong financial and competitive positions, have prospects for future growth and, most importantly, possess collateral value backing up the prices the Funds have paid for their shares. In a recent article in The Wall Street Journal entitled, What We Already Know About Investing in 2021, Jason Zweig describes the temptation of investors to chase whatever has been “hot,” and quoted Warren Buffett in characterizing the risk associated with excessive valuations, “Geometric progressions eventually forge their own anchors.” Should we have a strong vaccine-induced economic recovery in the coming year, we remain confident and hopeful that our companies will not be held down by such anchors. The same may not be able to be said about many technology companies that have been the beneficiaries of what some might describe as irrational exuberance. We’ll just have to see.

Thank you for investing with us. Stay well.