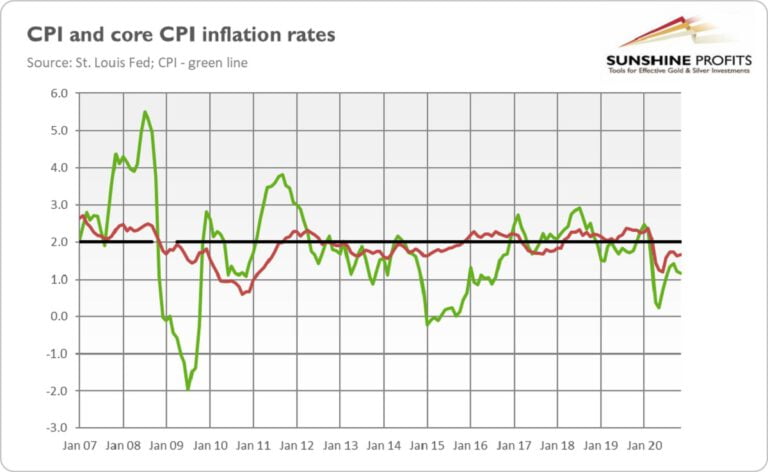 Inflation will be one of the greatest upside risks for gold in 2021. Will it materialize and make gold shine?

Gold In 2021 Is Incomplete Without Inflation

The report about gold in 2021 would be incomplete without the outlook for inflation . We have already written about it recently, but this topic is worth further examination. After all, higher inflation is believed to be one of the biggest tail risks in the coming months or years, and one of the greatest upside risks for gold this year .

Most economists and investors still believe that inflation is dead. After all, the only way to justify the central banks’ unprecedentedly dovish actions is the premise of low inflation. And the only way to justify the buoyant stock market amid the new highs in the number of Americans in hospital with COVID-19 is the expectation of an inflationless economic recovery this year. In other words, many people forecast the return to the Goldilocks economy after the end of the pandemic .

On the surface, it seems that they might be right. We haven’t seen double-digit inflation since the end of 1981. And last time the CPI annual rate was above 3 percent was in January 2012. Actually, in the last ten years, inflation was below the Fed’s 2-percent target most of the time, as the chart below shows. 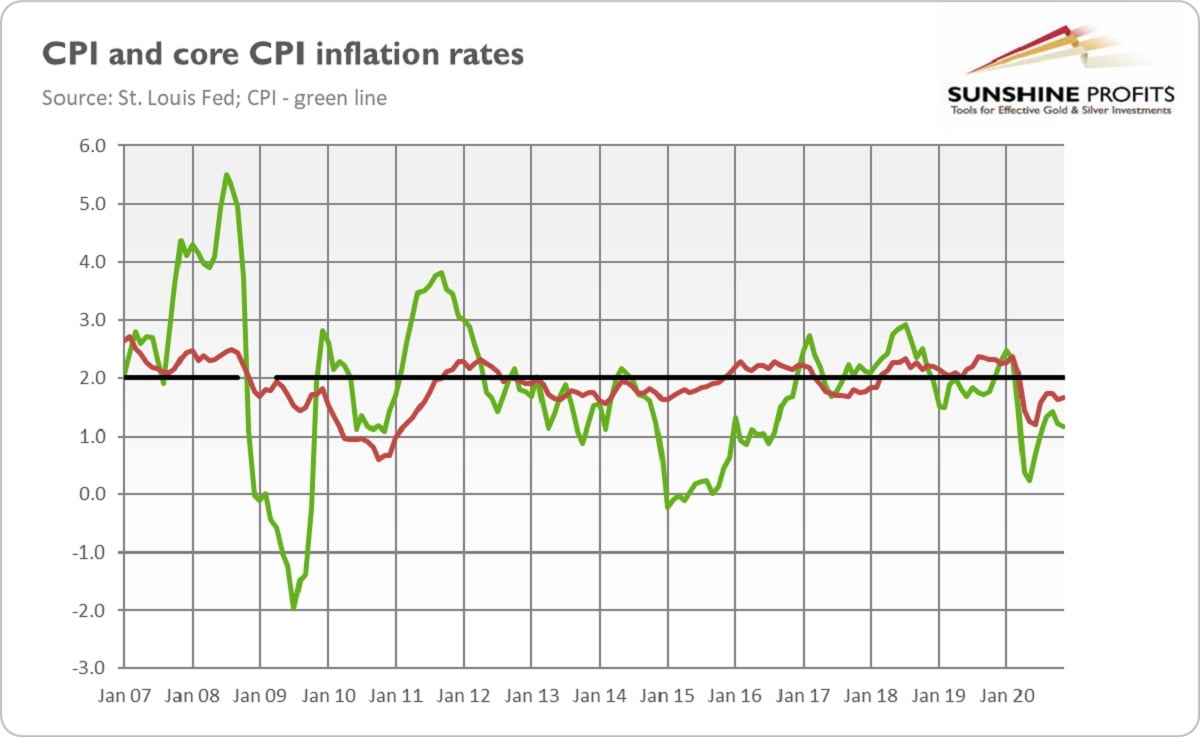 The Risk Of Higher Inflation

Moreover, the inflation rates dropped significantly during the U.S. epidemic and the Great Lockdown when people distanced socially and limited their spending. So, given the strength of the negative demand shock and the following plunge in inflation, why should we worry about the risk of higher inflation?

Well, shouldn’t it be obvious after experiencing a pandemic, i.e., an improbable but impactful event? Even a small probability of a surge in inflation should be worrying, especially given the pile of debt and, thus, limited room for central banks to hike interest rates to prevent inflation.

Moreover, the likelihood of an increase in inflation is not so small . As I’ve explained several times, the case for higher inflation is stronger today than in the aftermath of the Great Recession . The first reason is that the broad money supply has surged . This is because the banks haven’t been hit so far (in contrast to the financial crisis where banks suffered greatly), so they have been lending freely, as the chart below shows. 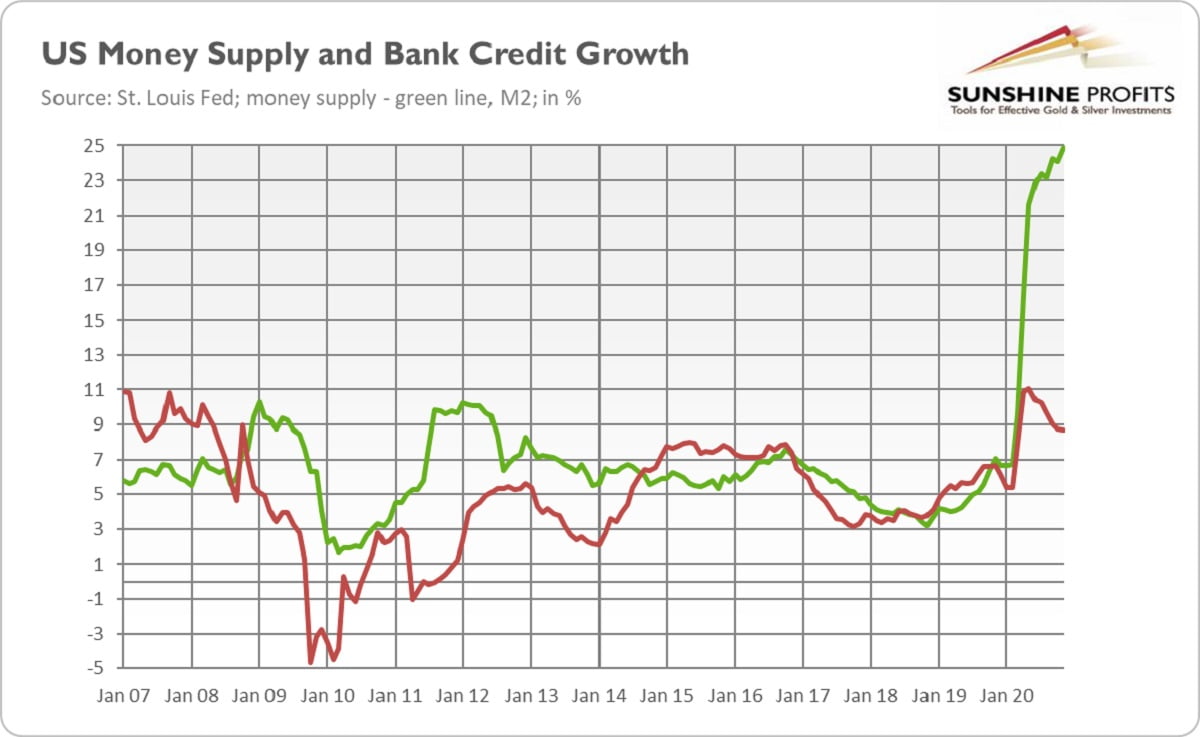 Second, in contrast to the previous economic crisis where people did not spend money because they had no income or they decided to repay their debts, this time, people didn’t spend money because they were stuck at home. But when the health crisis is over and people get vaccinated, some consumers may go on a spending spree . The realization of pent-up demand may overwhelm the firms’ capacity, leading to an increase in prices. There are already some signs of bottlenecks, or supply falling behind demand, such as the increase in prices of some commodities like iron ore.

Private Sector Will Find Itself Flush With Cash

In other words, when the world returns to normality, the private sector will find itself flush with cash. And I bet that some households will try to make up for all the time not spent in movie theatres, restaurants and hotels during the last year.

Third, there might also be some structural shifts in the global economy, which will reverse the current disinflationary forces . As Charles Goodhart and Manoj Pradhan argue in their book The Great Demographic Reversal , the era of low inflation, caused by globalization, is now ending. You see, in the 1980s and 1990s, China, India and post-communist countries from Europe and Central Asia, entered the global economy. As a consequence, the global labor supply for production of tradeable goods rose enormously, leading to weak inflationary pressure. But all this is going into reverse. Globalization is now weakening and there are no big countries in the queue to enter the global economy. Actually, ageing in China and other countries reduces the global labor supply, thus strengthening inflationary pressure.

Last but not least, the politicians and central bankers have become more complacent . The thoughtless and irresponsible stance of politicians is unsurprising, especially given the temptation to inflate away the public debt . However, the central banks also stopped worrying and embraced the inflation bomb. For example, the Fed has changed its monetary regime in 2020, announcing that it would tolerate overshooting of inflation above its target for a undetermined period of time.

The bottom line is that inflation should return in the coming months (more precisely, in the second half of the year, when the distribution of vaccines will be widespread). We shouldn’t experience double-digit rates, but the markets don’t expect a deflationary crisis either. As the chart below shows, inflationary expectations have already returned to pre-pandemic levels. 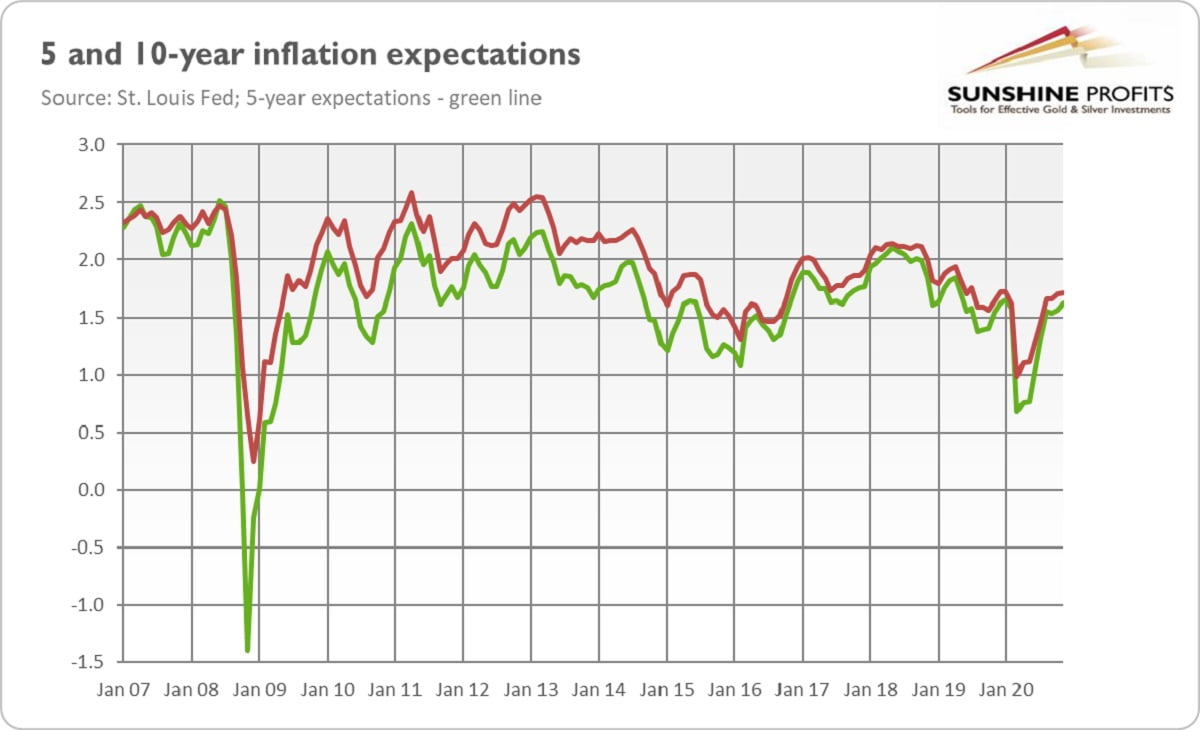 The Case For Reflation

All this is good news for price of gold . The case for reflation in the global economy is definitely stronger than after the global financial crisis of 2007-2009. The present risk of higher inflation should support the demand for gold as a hedge against inflation . And the increase in inflation expectations lowers the real interest rates , thereby positively affecting the yellow metal. Although gold will face some important headwinds this year, inflation expectations are likely to outpace the increase in nominal bond yields, which would put downward pressure on the real interest rates and support gold prices.