ValueWalk
Home Info-Graphs How Much Profit Are Companies Earning Per Second? 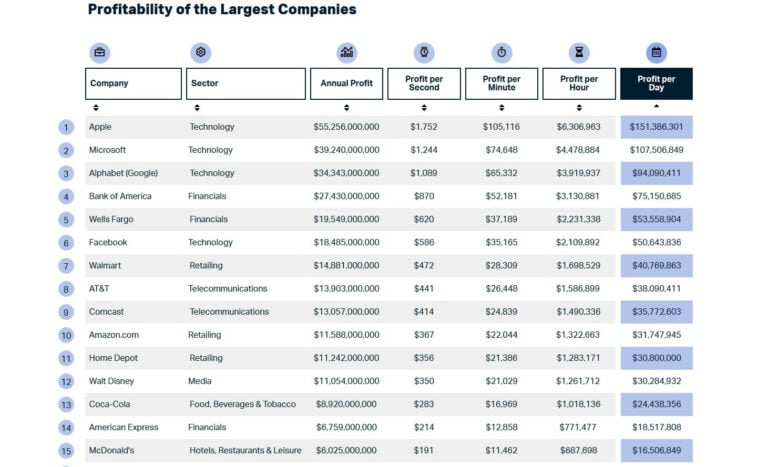 New research conducted by Tipalti reveals just how much profit the world’s biggest companies are earning per SECOND, with the most profitable company Apple making $1,752 a second.

The Top Ten Companies Earning The Most Profit Per Second

Apple is one of the world’s most profitable businesses, generating over $151 billion a day, which equates to $1,752 every single second.

To put that into context, the average weekly wage in the US currently stands at $1,237, meaning that the average American doesn’t even earn the same amount that Apple earns in a second, after a full week at work.

Fellow tech giants Microsoft and Alphabet (the parent company of Google) also draw in more than a thousand dollars each second, which works out at around $100 million a day.

But at the other end of the scale, Uber Technologies (who trust Tipalti with their accounts payable automation software) made a huge loss of $8.5 billion, equating to $270 every second. Despite being the world’s largest ride-hailing app, Uber has famously never turned a profit.

The Top Five Industries Earning The Most Per Second

The research also looked at how the average profit per second breaks down for different sectors across the whole Fortune 500 list, with those in food and drink making the most, averaging $232 a second, over $13,000 a minute and over $20 million each day.

You can find the full research here.