ValueWalk
Home Business Will Interest Rate Increase Cause Gold to Plunge in 2021? 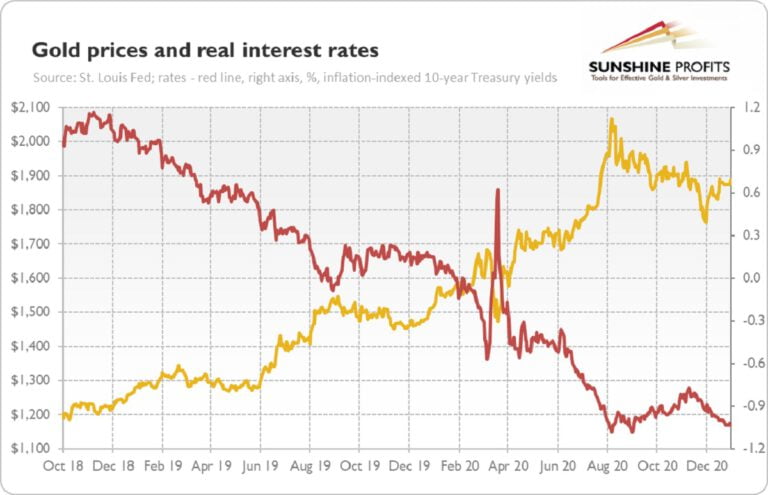 The decline in the real interest rates is the most important downside risk for gold. Will it materialize, plunging the price of the yellow metal?

Increase In Real Interest Rates Is A Downside For Gold

The rise in inflation is the most significant upside risk for gold this year, but there are also a few important downside risks. The most disturbing for us is the possibility that the real interest rates will increase. Why? Please take a look at the chart below. 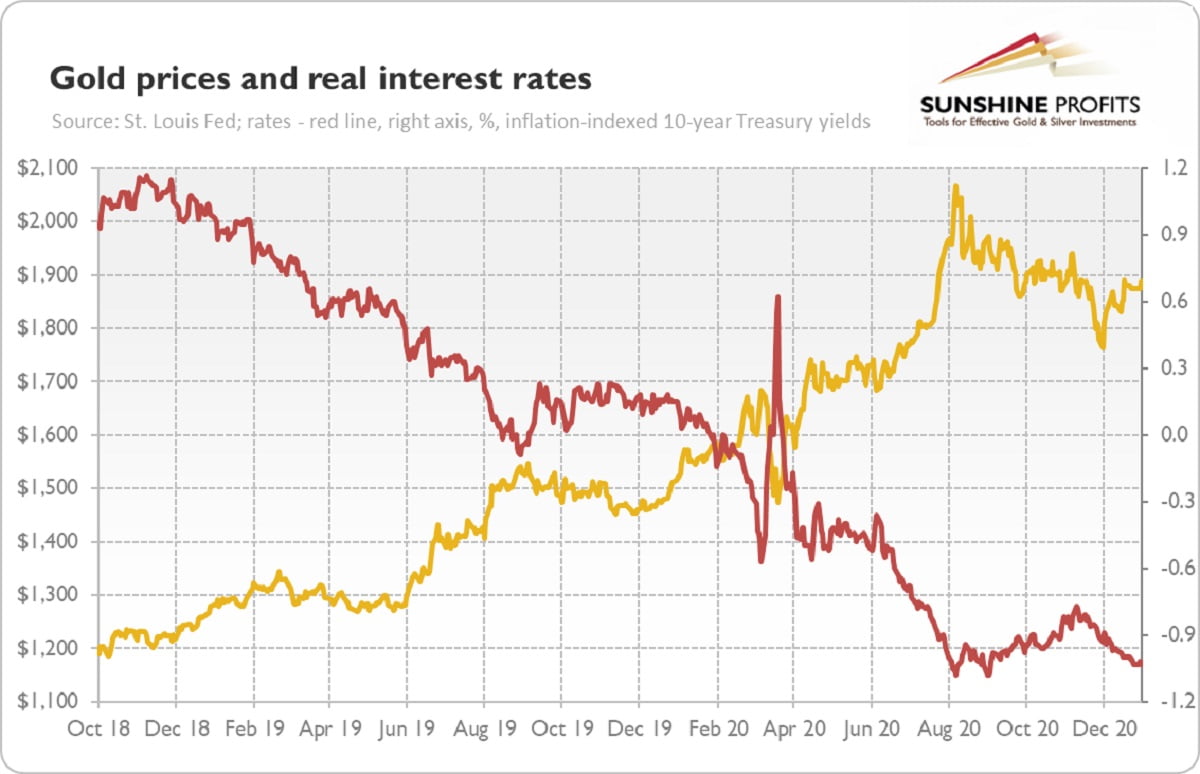 As you can see, there is a strong negative correlation between the real yields and gold prices . When the interest rates go up, the yellow metal falls, and when the rates go down, gold rallies . Indeed, the real interest rates peaked in November 2018 at 1.17 percent, just one month before the last hike in the Fed’s last tightening cycle . Since then, they were falling, reaching their historical bottom below -1.0 percent in the summer of 2020. Not coincidentally, gold was experiencing a bull market during this period, reaching its record high of almost $2010, just when the rates bottomed. And, as the rates normalized somewhat, the price of gold corrected to the level below $1,900.

Now, the obvious question is whether there is further room for real interest rates to go down . In 2019, they were falling amid the economic slowdown and the dovish Fed cutting the interest rates. Last year, they plunged even further (with a short spike because of the surge in the risk premium ), as a result of the COVID-19 related economic crisis and the U.S. central bank slashing the federal funds rate to practically zero.

However, the Great Lockdown and resulting deep downturn are behind us. When we face the second wave of the pandemic and people become vaccinated, there will be an economic recovery. As well, the Fed has already brought the interest rates to zero – meaning that without the U.S. central bank implementing NIRP , the nominal policy rates reached their lower bound. So, assuming that the Fed will not cut interest rates further and that investors will not expect a further slowing down of the economy, the room for further declines in the real interest rate is limited.

Reflation In 2021 Is More Likely

The only hope lies in the increase in inflation expectations, which is actually quite probable, as I explained in the previous part of this edition of the Gold Market Overview . Given the surge in the broad money supply , the pent-up demand, and some structural shifts, reflation in 2021 is more likely than it was in the aftermath of the great financial crisis .

However, gold investors should also be prepared for a negative scenario of low inflation. After all, the Fed has repeatedly undershot its annual inflation target. In this case, the real interest rates may stay roughly the same or they could even rise.

Let’s take a look at the chart below, which shows the gold prices and real interest rates after the Great Recession . In the very aftermath of the Lehman Brothers’ bankruptcy , they surged, but after the panic phases ended, they were falling until the end of 2012, just when, more less, the bear market in gold started. 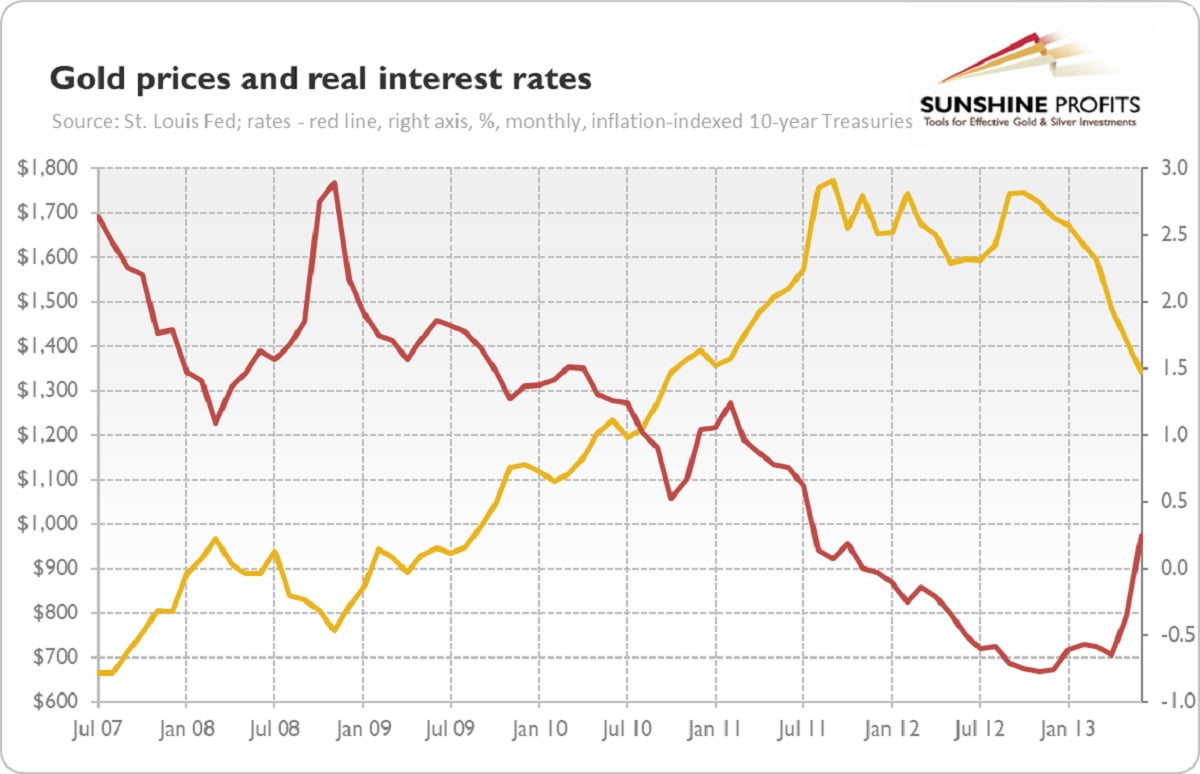 Now, somebody could say that the real interest rates were falling for four years until reaching bottom at the end of 2012, so we shouldn’t worry about the normalization of interest rates. However, the COVID-19 related economic crisis was very deep, but also very short. Everything is happening now at an accelerated speed, so we could already be reaching the local bottom in the interest rates (or be close to it).

The Risk Of An Increase In Inflation

Of course, there are important differences between that period and today . First, as I’ve already emphasized, there is now a higher risk of an increase in inflation. Second, in 2013, there was a taper tantrum , while today, the Fed maintains an ultra-dovish stance and does not signal any interest rate hikes in the foreseeable future. Although the U.S. central bank didn’t expand its quantitative easing in December, showing that it feels comfortable with some increases in the bond yields , it’s not going to accept substantial rises in the interest rates. The dovish Fed’s bias is one of the main factors behind the downward trend in the real interest rates (even if they normalize somewhat, they reach further lower peaks and bottoms over time).

Third, the U.S. dollar looks different. As the chart below shows, the greenback started to appreciate in 2011, pushing gold prices down. But today it is more likely that the U.S. dollar will weaken further due to a changing administration in the White House, the economic stabilization and cash outflows into developing countries, soaring public debts, a zero-interest rate policy, and the risk of an increase in inflation. 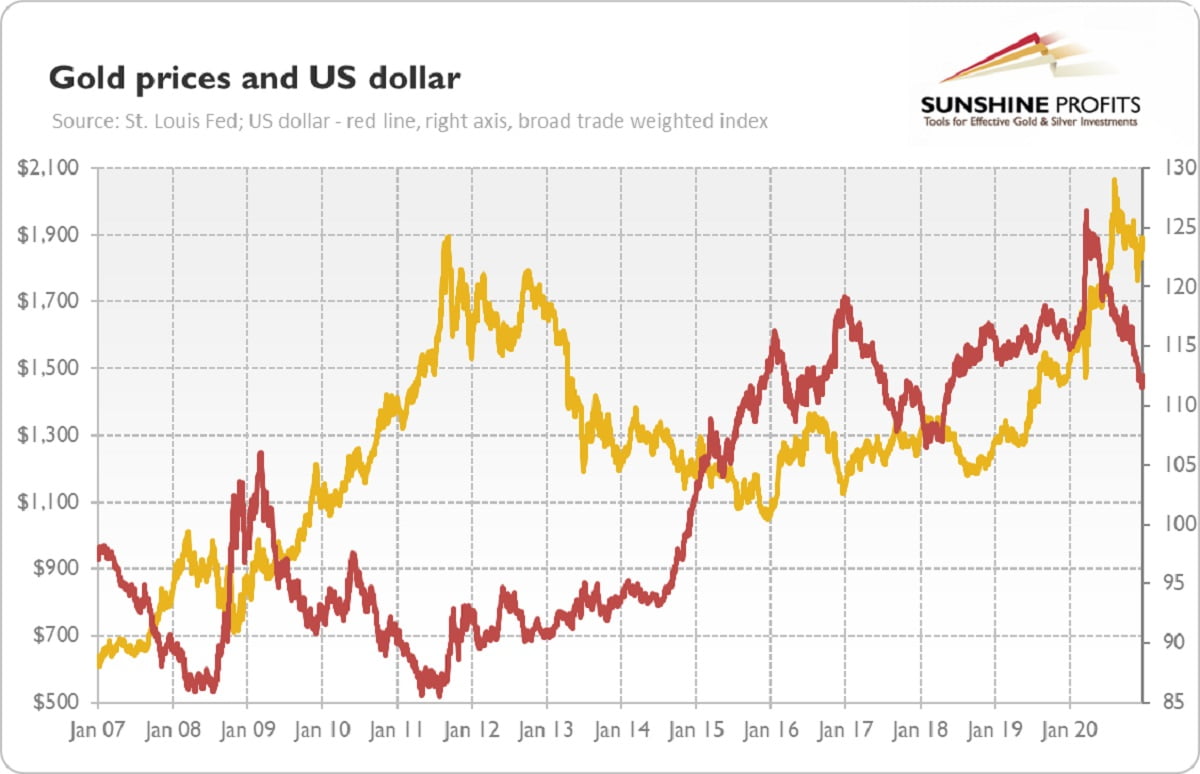 If so, the normalization of the real interest rates (if it happens, which is far from being certain) doesn’t have to plunge the yellow metal . In other words, there are important downside risks to the bullish case for gold this year, but 2021 does not have to look like 2013 in the gold market.