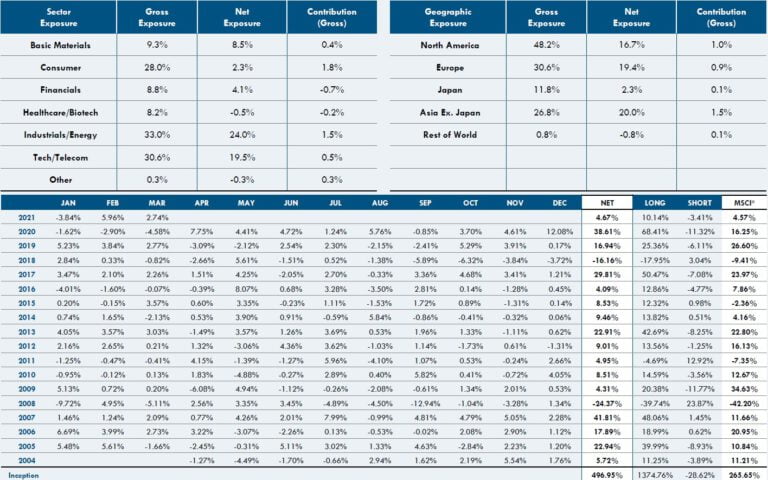 Returns were solid for the Flagship Fund during the first quarter and roughly matched the global indices, despite our net portfolio exposure being held at approximately 60%. While tailwinds for small-cap stocks continue to be favorable, sector rotations away from last year’s tech darlings to more cyclical and industrial areas were timed well. Following a poor result for shorts in January, the “Reddit effect” softened in the last two months of the quarter, allowing for equally solid short returns in both months.

While all regions contributed in March (led by Asia), Asia contributed 3.7% to gross returns for the quarter, while Europe added about 3.1% in the same period. North America was slightly negative, still recovering from the damage inflicted by short losses suffered in January. Within sectors, Industrials and Materials stood out contributing 5.2%, while Technology added 2.7%. One notable detractor was Healthcare, which was primarily driven by adverse volatility in shorts during the last week of January.

Notable long winners were names we have highlighted previously, such as Evolution Gaming (contributing 2.2%), Darling Ingredients (1.4%) and Tokai Carbon (1.2%). Notable detractors, which had been winners last year, were Rush Street Gaming (-0.7%) or those perceived to be harmed by re-opening such as online retailer BHG Group (-0.6%). On the short side, GSX Techedu deserves specific mention. GSX started the year trading around $50 (per share) and climbed to over $140 during the month of January, only to close out the quarter at about $33. Had we held the same position throughout Q1, it would have been a nice contributor to performance, but risk management forced us to realize some losses during the epic January short squeeze. Near quarter-end, GSX plummeted when it was revealed it was part of an engineered squeeze undertaken by the now infamous Archegos Capital. Why multiple brokers would provide five times leverage to someone (who, by the way, previously pleaded guilty to wire fraud and insider trading1) to help engineer a short squeeze in a fraudulent Chinese company is beyond disappointing. Shame on all involved. Shorting is hard enough as it is without our own brokers working against us.

The first quarter of 2021 has been predictably volatile. The markets are shifting focus away from safe, defensive businesses to those that have survived the lockdown and are likely to recover strongly as economies reopen. Adding a crosscurrent, however, is the ongoing effect of spectacular stimulus which has levitated all manner of speculation from SPACs to intergalactic tourism plays. During the first quarter, we witnessed the market move its focus away from these more speculative areas. 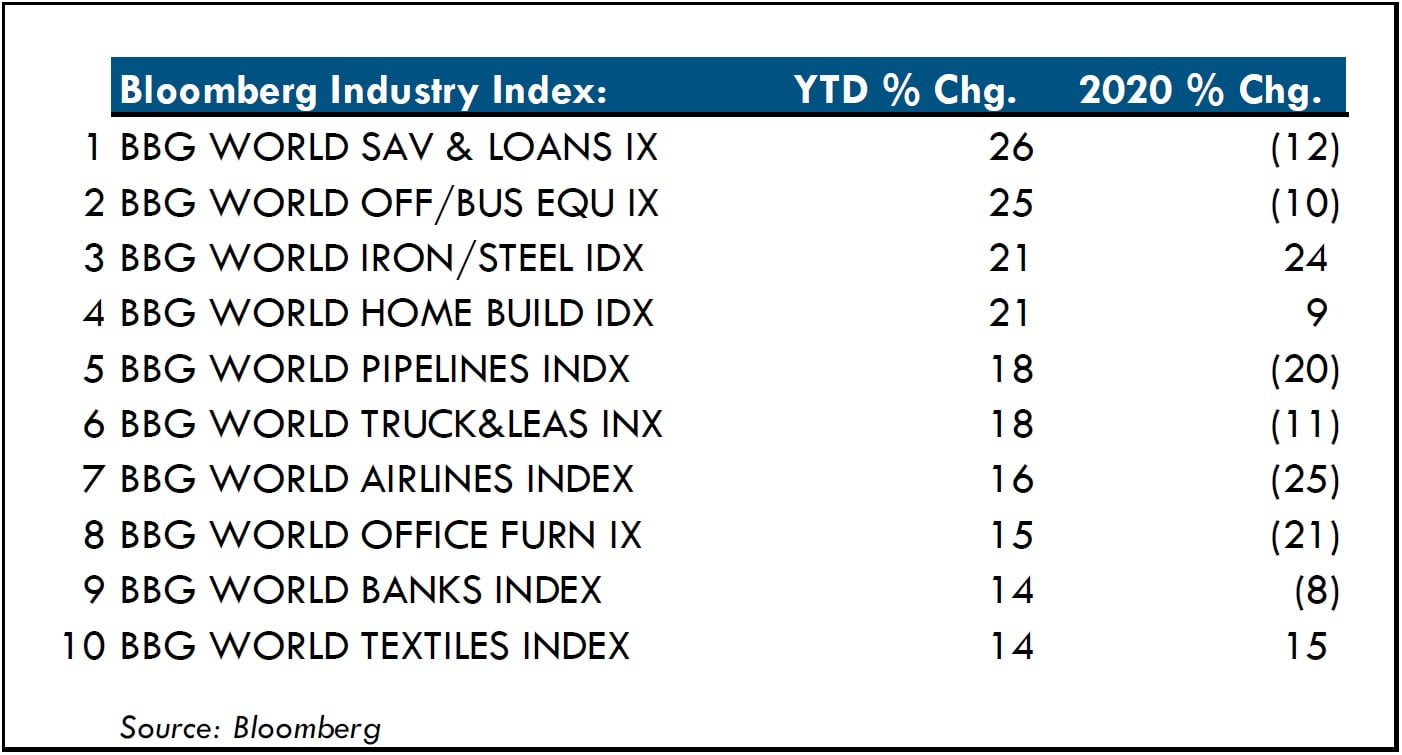 It appears that the prospect of re-opening will bring with it some sanity – possibly a direct result of fewer stimulus checks being sent to day traders. The outlook is hardly clear, however, as both the U.S. Federal Reserve and ECB have committed to keeping the current level of extremely low interest rates for at least another year or two. Furthermore, the bugaboo of higher inflation has already been dismissed, as any spike up (which appears to be underway) is explicitly regarded as temporary. With caution being thrown to the wind, it seems the market’s “tailwind” of central bank monetary stimulus will continue for the foreseeable future even if inflation perks up. As always, we build our portfolio bottom-up while due consideration is paid to these macro factors. With this in mind, we have leaned into our more speculative shorts as they have begun to work. We detail several of these names for your reference below.

Prior to COVID-19 pandemic, AMC had been a multi-year “melting ice cube” short and part of a basket of movie theater companies we have shorted (including Cineworld, Cinemark, Marcus, etc.) in the secular theme of declining movie attendance globally. Some of our best shorts have had the lethal combination of declining revenues and too much debt, with AMC being a prime example. Obviously, COVID-19 massively accelerated their problems and despite our view that it was a “zero,” we (luckily) covered in the low-single digits as short positions in penny stocks can often be tricky.

Thanks to retail enthusiasm (or perhaps more “Archegos-like” shenanigans), AMC has literally risen from the dead. The market cap today is higher than at any time in its history while debt is twice what it was two years ago, meaning the enterprise value (EV) now stands at almost $16bn, or about triple what it has been over the last several years. As a simple thought exercise, assume sales return to past peak (hard to do with fewer theaters, fewer seats, shortened or no movie release windows, improvement in home theaters, etc.) and AMC today trades at 3 times the EV/Sales multiple vs. pre-pandemic. Is AMC worth three times what it was worth two years ago? Highly unlikely!

Yamashin Filter’s main business is providing filters used in hydraulic excavators. This core business is niche but cyclical, growing in-line with or slightly above GDP and with decent margins. Management is destroying shareholder value, however, by getting into the consumer face mask business. Throughout 2020, the company built up grand expectations for this new business line, only to whipsaw investors with dramatic cuts to guidance just months later. Management claimed the mask business would generate ¥3bn in revenue and ¥910mm in profits, but just three months later slashed this revenue target by two-thirds and changed their profit guidance to a loss. Meanwhile, it continues to spend on expanding production capacity for this commoditized offering. At 89 times next year’s earnings, which we think have potential to disappoint, we see plenty of further downside.

We are short Nevro, a medical device company specializing in spinal cord stimulation (SCS) for chronic pain conditions. Our thesis is premised on consistently negative operating margins amid flat revenue growth, limited real-world efficacy of their flagship Senza device, and evidence of a kickback scheme where they have compensated physicians to implant their devices. Perhaps the reason their devices are so difficult to place is the poor real-world results of their device. Multiple physicians confirm that patients typically respond early in treatment only to have any effect wane within about 6 months on therapy and more than 75% of patients requiring an explant of the device within a few years…not exactly the profile of the “best-in-class” device the company purports. Finally, the company appears to be engaging in a kickback scheme to drive implants as reported by European investigative journalists citing contracts showing a payment of approximately $10k per procedure to Swiss physicians. While there is no legal liability in Switzerland for medical device kickbacks until 2023, we doubt this type of behavior is limited to Switzerland. With sales over the last few years stagnating around $350-$400mm and losses mounting, we find it hard to justify the current $5bn valuation.

We are also short shares of CD Projekt, the Polish AAA video game developer and publisher. CD Projekt is the 11th largest company on the Warsaw Stock Exchange and the 14th largest pure play game developer in the world. The company has gained a strong reputation and cult-like following by gamers for the quality of its games, which are typically story-driven, single player games. Most notably, CD Projekt is known for its Witcher series, which has sold over 50 million copies since the first game was launched 2007. Compared to studios of similar market cap which typically own various franchises and are juggling multiple projects at a time, CD Projekt has historically only worked on a single game at a time with 4-5 years between releases. Recently, the company has made headlines for the launch of its newest game, Cyberpunk 2077. Cyberpunk was one of the most anticipated game launches in recent memory and consensus expectations firmly placed it among the highest selling launch games of all time. While our initial thesis centered on the belief that expectations were simply too high, the launch has been more disastrous than we could have possibly imagined. Reviews of the game were generally positive in the days leading up to the launch, however they were revealed to be based on the higher performance PC version of the game that CD Projekt provided to reviewers. As it turned out, the console version of the game was so riddled with bugs that the game was nearly unplayable. This was such a problem that within a week following launch, Sony removed Cyberpunk from its PlayStation Store “until further notice” and as of early April, it has yet to return. Now four months after the launch, new copies of the game can be found at a 30% discount on Amazon. CD Projekt had a lot riding on this game and will now be spending a significant part of 2021 fixing bugs and trying to regain the attention of fickle gamers instead of launching previously planned additional content and multiplayer expansions. While CD Projekt could turn it around, the industry’s history with previous botched game launches is not a good omen. By the time the company is able to right the ship, its possible gamers will have already moved on.

While shares are down over 50% from the launch, they are still trading at approximately 20 times FY21 revised consensus earnings; earnings that will likely steadily decline over the coming years (EPS declined at a 17% CAGR in the 4 years following the Witcher 3 launch) as the company moves on to its next major game. This compares to mid-20 times P/E multiples for peers like Activision and EA that have more predictable game releases and growing EPS. Furthermore, we believe consensus estimates may still be too high. By our math, they imply another 10-15mm copies of Cyberpunk to be sold in 2021, which would mean that Cyberpunk will have sold nearly as many copies in its first 12 months as the critically acclaimed Witcher 3 did after 5 years. If CD Projekt fails to resuscitate Cyberpunk, we believe that consensus estimates one and two years out could be cut by as much as 50% with a commensurate drop in share price. 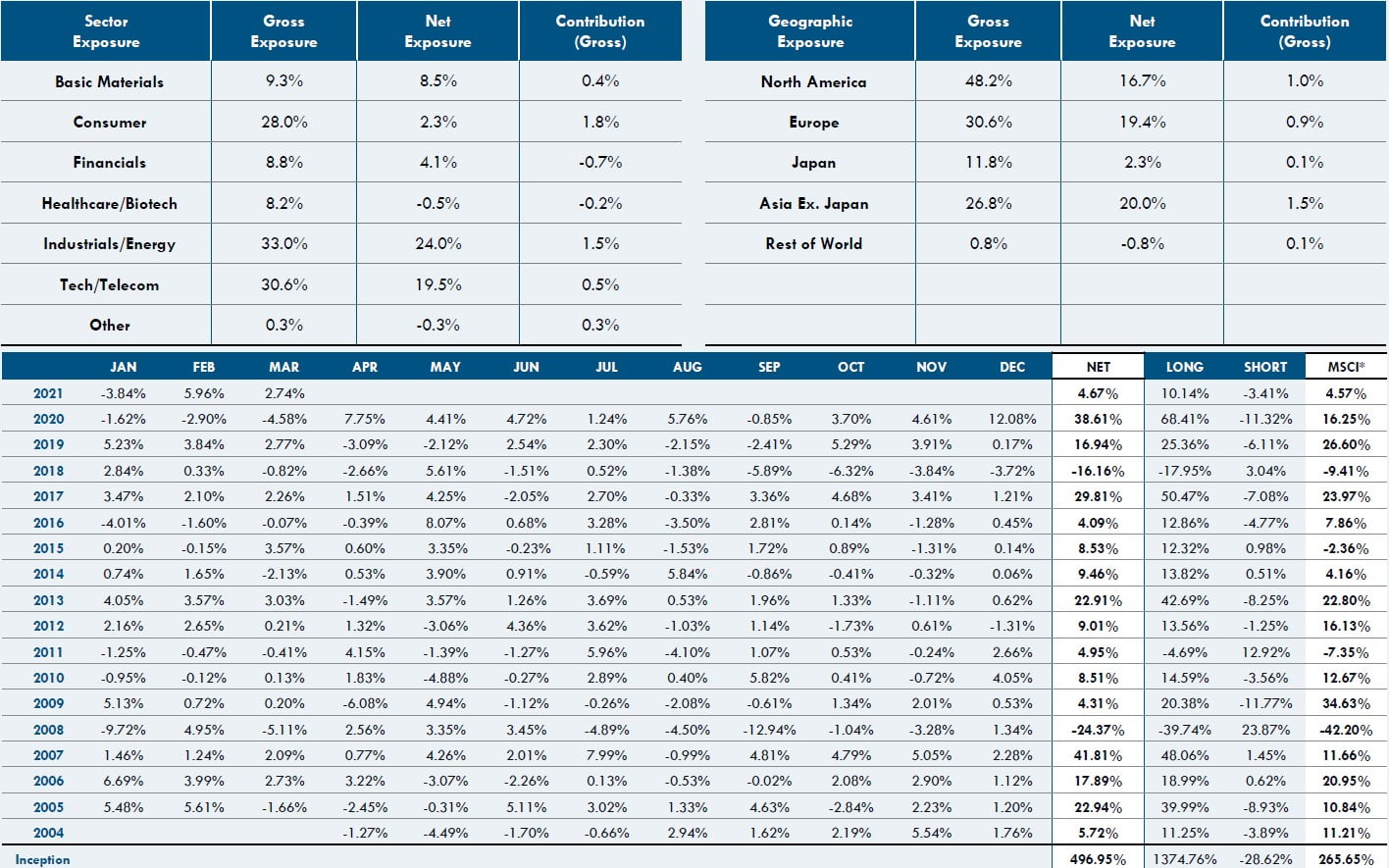