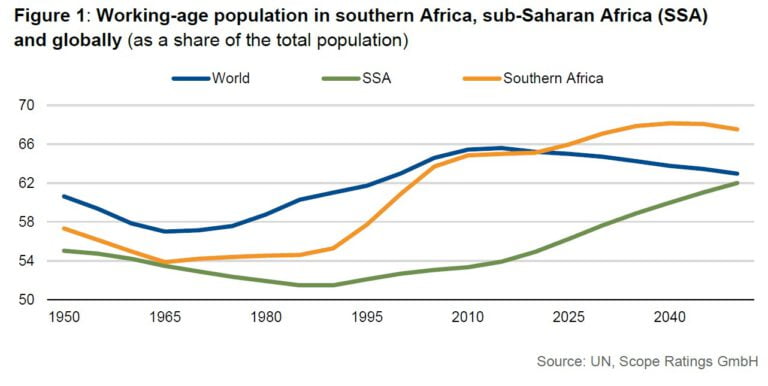 Southern Africa’s middle-income countries will continue to miss out on the demographic opportunity of above-average shares of people of working age in populations unless governments better tackle unemployment, social inequalities, and high HIV rates.

Countries Of Southern Africa Are At Risk

Scope Ratings says credit outlooks of the five countries of southern Africa are at risk from faltering growth, sharpening social tensions and growing fiscal pressures, which demographics, in the absence of the right policy mix, have accentuated for several years. 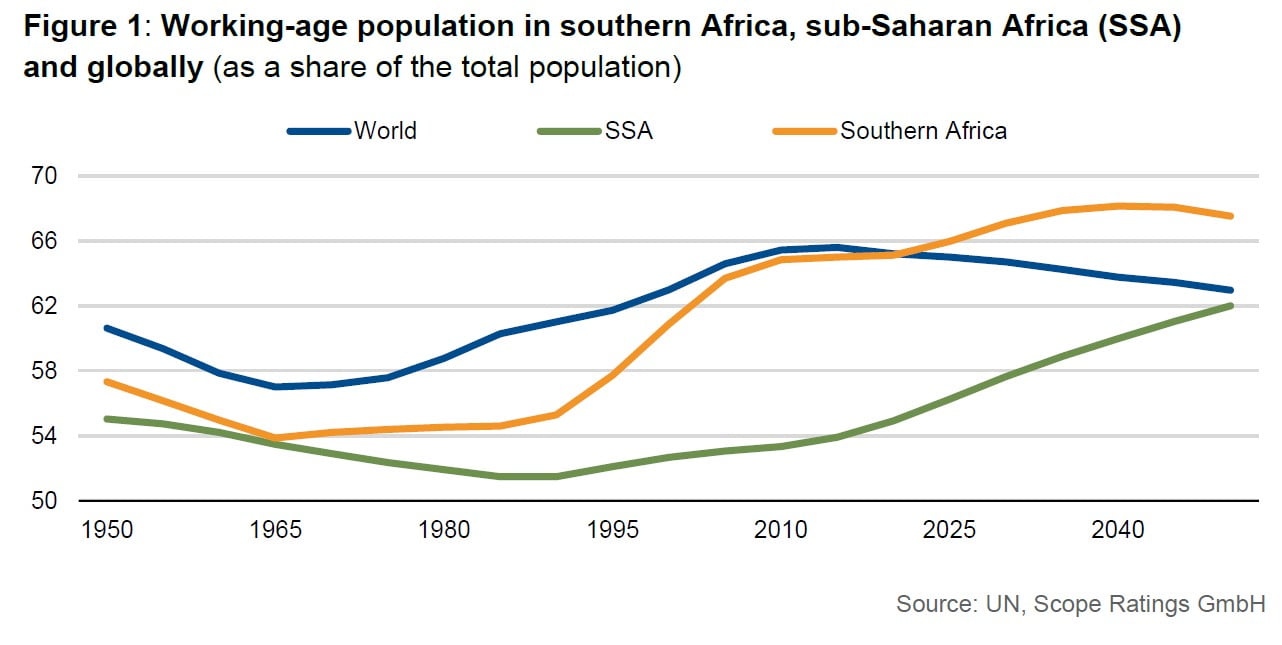 “Make-or-break demographics are at their most acute in South Africa, the economic lynchpin of the region, on whose fortunes Eswatini, Lesotho and, to a lesser degree, Botswana and Namibia depend,” says Zuzana Schwidrowski, director at Scope.

Southern Africa’s middle-income economies are relatively mature in demographic terms by contrast with the rest of sub-Saharan Africa. The former countries have a high and rising proportion of people of working age. The share of young people as a ratio of total persons of working age is declining. As the average age of this latter segment of the population increases, its members tend to save and invest more, which should support economic growth.

“However, since the global financial crisis in 2008 and 2009, southern African countries have missed out on opportunities presented by their favourable demographics,” says Schwidrowski. Instead, they have some of the world’s highest rates of unemployment, inequality, and HIV infection. Achieving inclusive growth without substantial structural transformation has remained elusive in the context of their dual economies – a relatively small, efficient formal sector but a large and mostly subsistence-based informal sector – the latter with poor labour productivity exacerbated by elevated HIV-positivity rates.

In South Africa, the economy has underperformed that of other emerging markets for years, with low levels of employment, running at 40-45% of the working-age population, being a permanent feature. Growth fell below 2% a year after the global financial crisis, while the economy contracted by 7% in 2020 due to the Covid-19 pandemic. Low growth has contributed to rising public debt to GDP over the past decade, now reaching 77% of GDP, up from 27% in 2008, according to the IMF.

In its paper, Scope explores two scenarios for South Africa for the period 1995-2045. The first assumes “no policy progress”, with flat labour productivity growth, similar to average outcomes over 2010-2020. The employment rate gradually recovers from the Covid-19 shock, but just to pre-crisis levels.

“In this case, the average annual potential real GDP growth would slow to 1% in the long term, with adverse consequences for economic output, social stability and public finances,” says Giulia Branz, associate analyst at Scope.

The second scenario assumes, however, an annual average productivity growth of about 0.5% as the government undertakes policies to make labour and product markets more business friendly and strengthen human capital. Such measures lift longer-term growth potential towards 2-3% a year, easing pressure on public finances and supporting social cohesion. “Growth would become more inclusive, with the employment rate rising slowly from about 45% in 2015 to 55% by 2045, providing some measure of a demographic dividend for South Africa with favourable growth spill-overs for neighbouring economies,” says Branz. 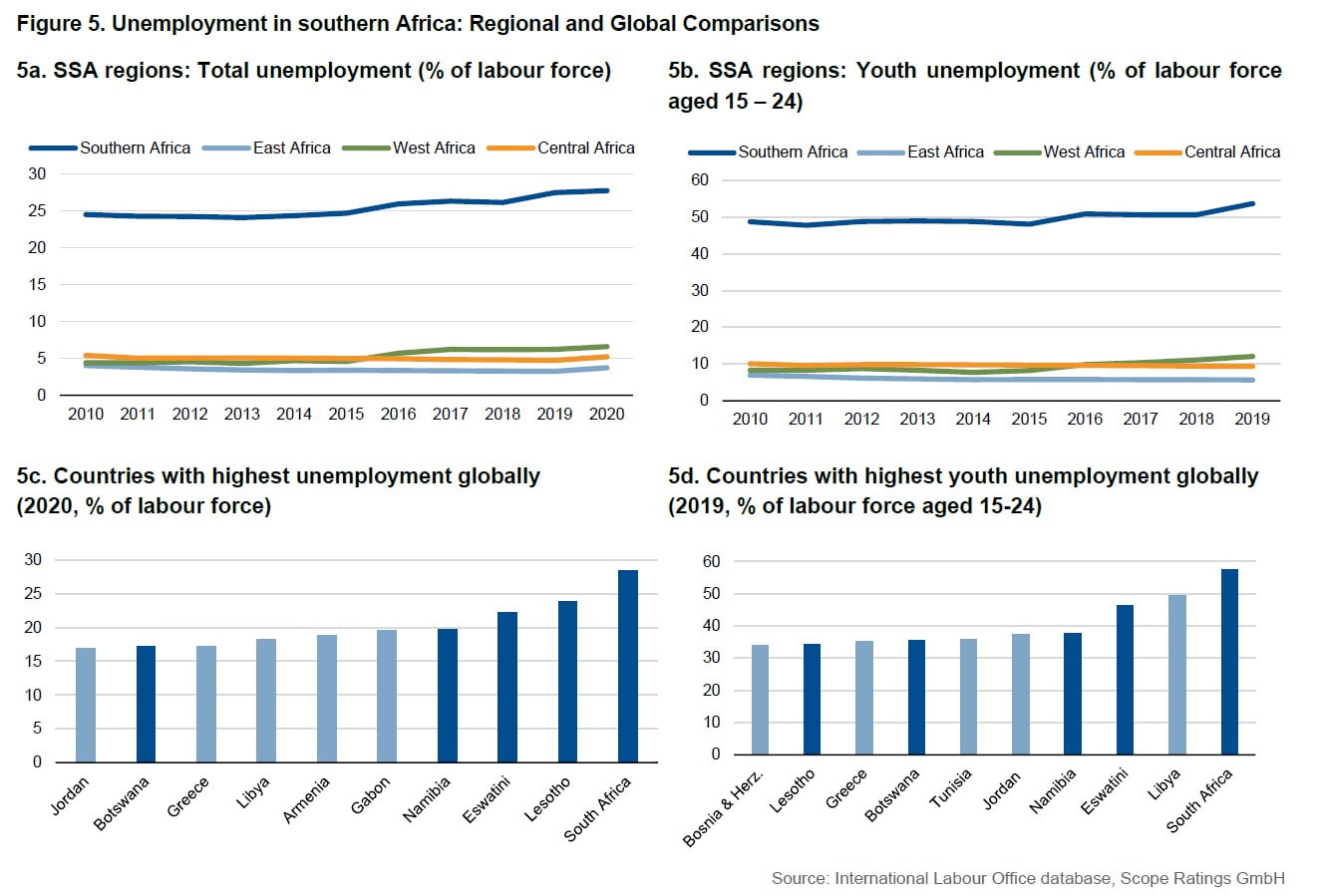 Scope Ratings GmbH is part of the Scope Group with headquarters in Berlin and offices in Frankfurt, London, Madrid, Milan, Oslo and Paris. As the leading European credit rating agency, the company specialises in the analysis and ratings of financial institutions, corporates, structured finance, project finance and public finance. Scope Ratings offers a credit risk analysis that is opinion-driven, forward-looking and non-mechanistic, an approach which adds to a greater diversity of opinions for institutional investors. Scope Ratings is a credit rating agency registered in accordance with the EU rating regulation and operating in the European Union with ECAI status.