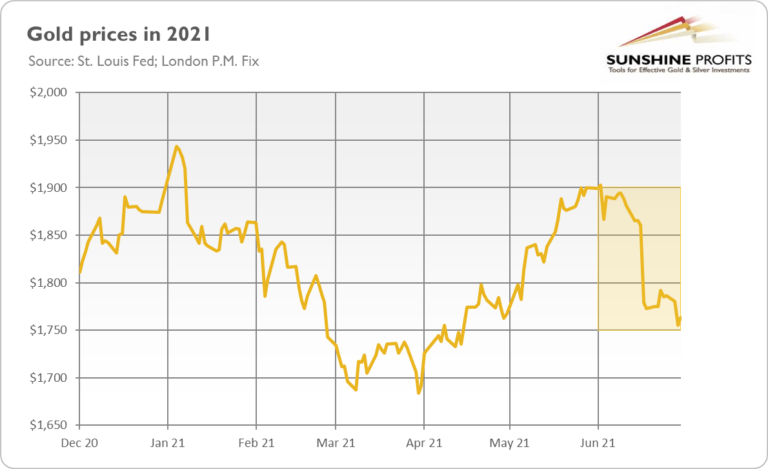 Although gold doesn’t have to suffer during the actual tightening cycle, the Fed’s hawkish turn is fundamentally negative for gold prices.

Oh no, my worst nightmare related to the precious metals has materialized. In the June edition of the Gold Market Overview, I wrote:

Of course, gold is not a perfect inflation hedge in the short term. If the interest rates increase or the Fed tightens the monetary conditions in response to inflation, gold may struggle. Actually, the start of normalization of the monetary policy could push gold downward, just as it happened in 2011.

And indeed, the Fed turned hawkish in June . The FOMC members started talking about tapering quantitative easing , and at the same time the recent dot-plot revealed great willingness among them to hike interest rates . And, in line with the prediction, gold prices plunged in response to the Fed’s hawkish signals about possible normalization of the monetary policy . As the chart below shows, the London (P.M. Fix) price of gold declined from $1,895 to $1,763 in June. 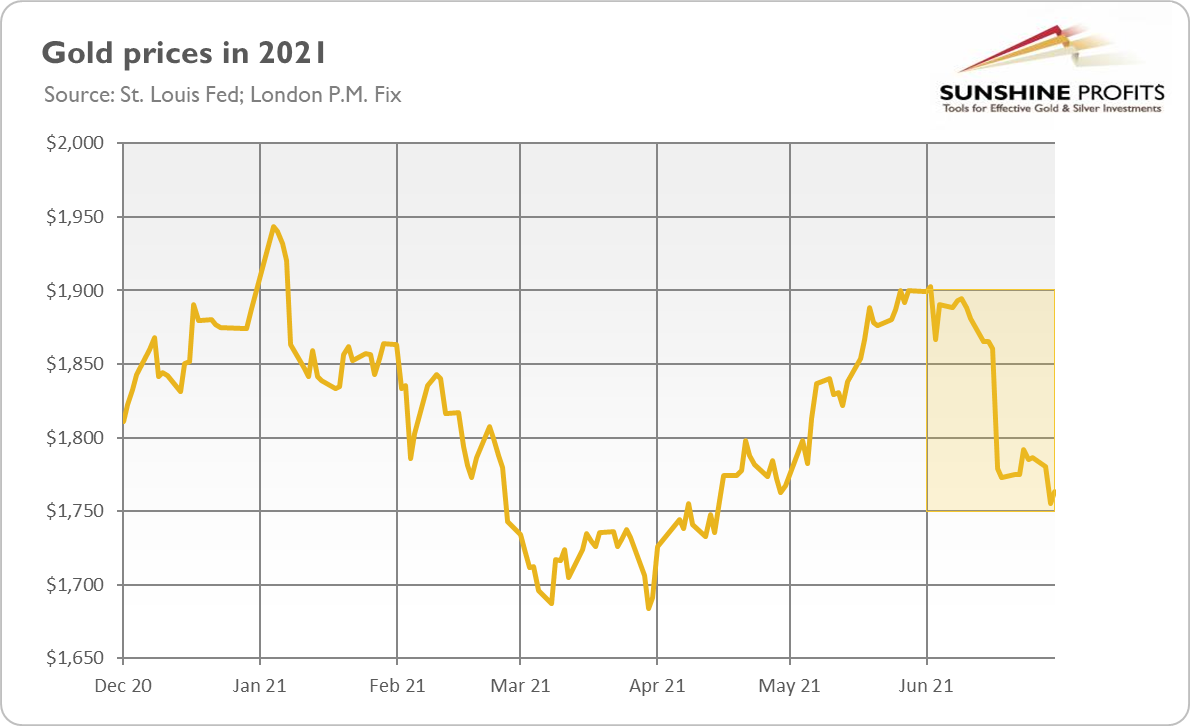 Now, the key question is: what’s next for gold? Was the June slide just a correction? An exaggerated reaction to the not-so-meaningful economic projections of the FOMC members? After all, “they do not represent a Committee decision” and they “are not a great forecaster of future rate moves”, as Powell reminded in the prepared remarks for his press conference in June.

But maybe it’s the other way around? Did the Fed’s about-face mark the end of the bull market in gold ? Are we witnessing a replay of 2013, where expectations of the Fed’s tightening cycle and higher interest rates (and later the taper tantrum ) sent gold lower, pushing it into bears’ embrace?

Gold’s Behavior In The Tightening Cycles

To find out, let’s check how gold behaved in the previous tightening cycles. As one can see in the chart below, the last tightening cycle of 2015-2019 wasn’t very detrimental for the yellow metal ; gold prices weren’t declining, they remained in the sideways trend. 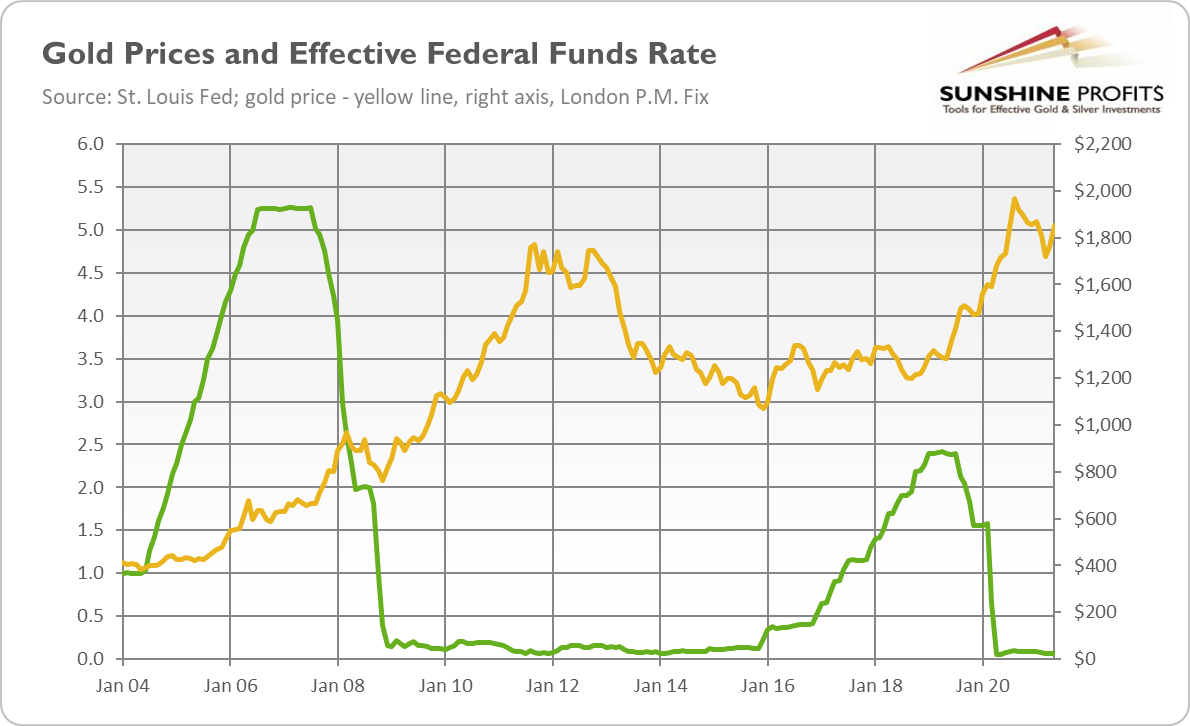 Of course, the tightening created downward pressure on gold. We can see that its price started to rally when the normalization ended, and it accelerated when the Fed turned dovish and started the cycle of interest rate cuts. However, gold didn’t enter a bear market ; it’s consoling news for all gold bulls.

Neither the tightening cycle of 2004-2006 was negative for gold prices . On the contrary, the price of gold appreciated in that period. Interestingly, it was a period of rising inflation , as the chart below shows. Similarly, the tightening cycle of the mid-1970s was accompanied by accelerating CPI annual rates , and it was also a positive period for gold. 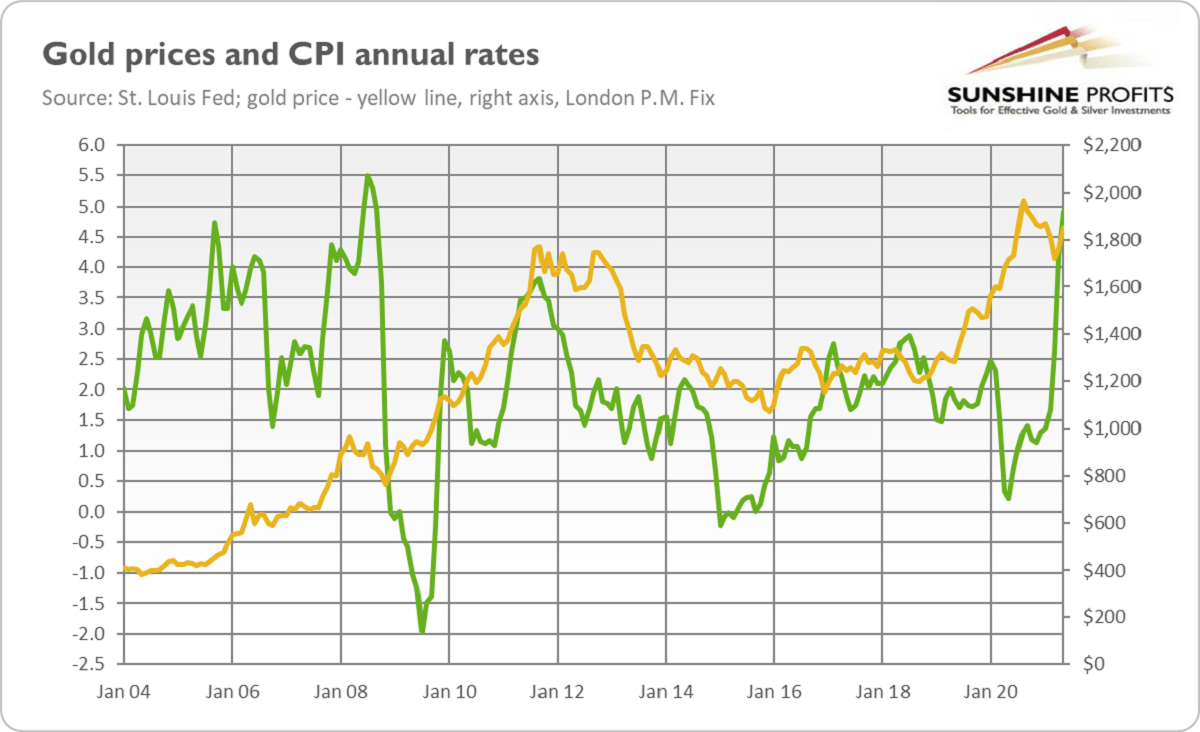 Hence, the upcoming tightening cycle doesn’t have to be bad for the yellow metal . If it is accompanied by rising inflation, gold may rise in tandem with the federal funds rate . So, it turns out that the key is not the actual changes in the Fed’s policy and interest rates, but the expectations of these changes, which translate into the real interest rates .

Indeed, the chart below reveals a strong positive correlation between gold prices and real interest rates. It shows that gold suffered not from the actual previous tightening cycle, but from the expectations of the tightening cycle . As one can see in the chart, the yellow metal definitely entered a bear market in late 2012, just when the real interest rates bottomed out. And then, gold prices plunged in 2013 amid the taper tantrum, when the surprising announcement of tapering of asset purchases by Ben Bernanke pushed the bond yields much higher. Importantly, the actual tapering began a few months later, while the first interest rate hike came only in December 2015. 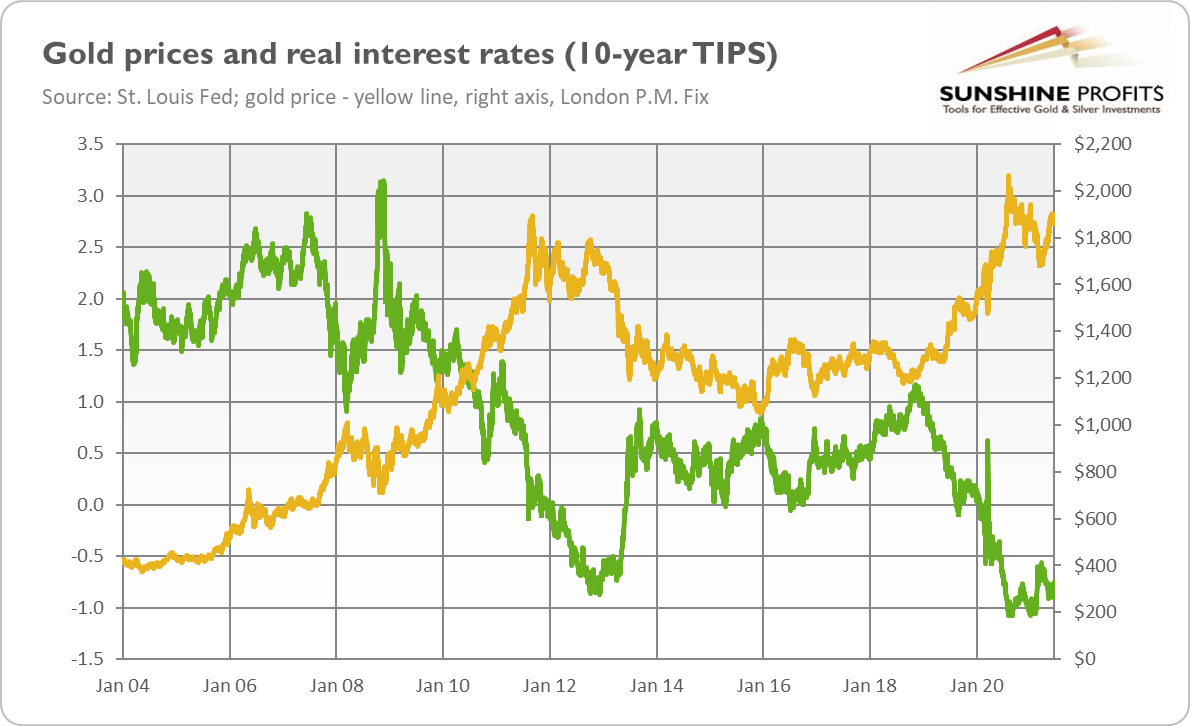 So, what does this short review of the previous tightening cycles imply for the gold market? Well, the good news is that gold doesn’t have to suffer from the tightening cycle , especially if higher inflation turns out to be more lasting than commonly believed. This is because the real interest rates will remain low. And, given the increase in the public debt , Wall Street’s addiction to easy money, and the Fed’s dovish bias, the upcoming tightening will probably be less tight than the previous ones.

However, I also have some bad news. First, it might be the case that inflation and inflation expectations have already peaked in May, while the real interest rates have reached the bottom. In this scenario, the outlook for gold is rather grim .

Second, although gold may be fine with the actual tightening cycle, we are in the expectations phase. And what do I mean by that? Investors are betting that the Fed will start tightening its monetary policy soon; for example, they expect the official announcement on tapering as early as September 2021. And the expectations are what matters. The Fed’s meeting in June could have been a mini taper-tantrum, as it surprised investors, the bond yields rose, and the price of gold plunged. So, if history is any guide, it seems that gold still has more room to slide .