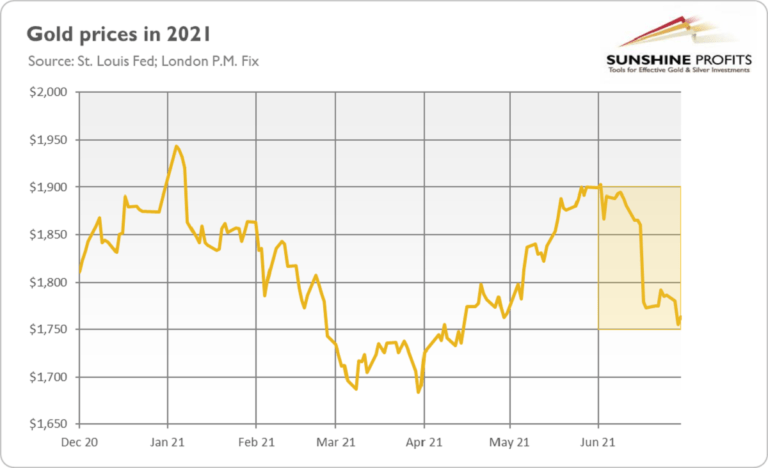 June was a terrible month for gold. Without a fresh crisis or a strong dovish signal from the Fed, gold may continue its disappointing performance.

June wasn’t too kind to gold. As the chart below shows, the yellow metal plunged more 7.2% in the last month , the biggest monthly decline since November 2016. In consequence of the June rout, the whole first half of this year was awful for gold, which lost 6.6% in that period, the worst performance since H1 2013. 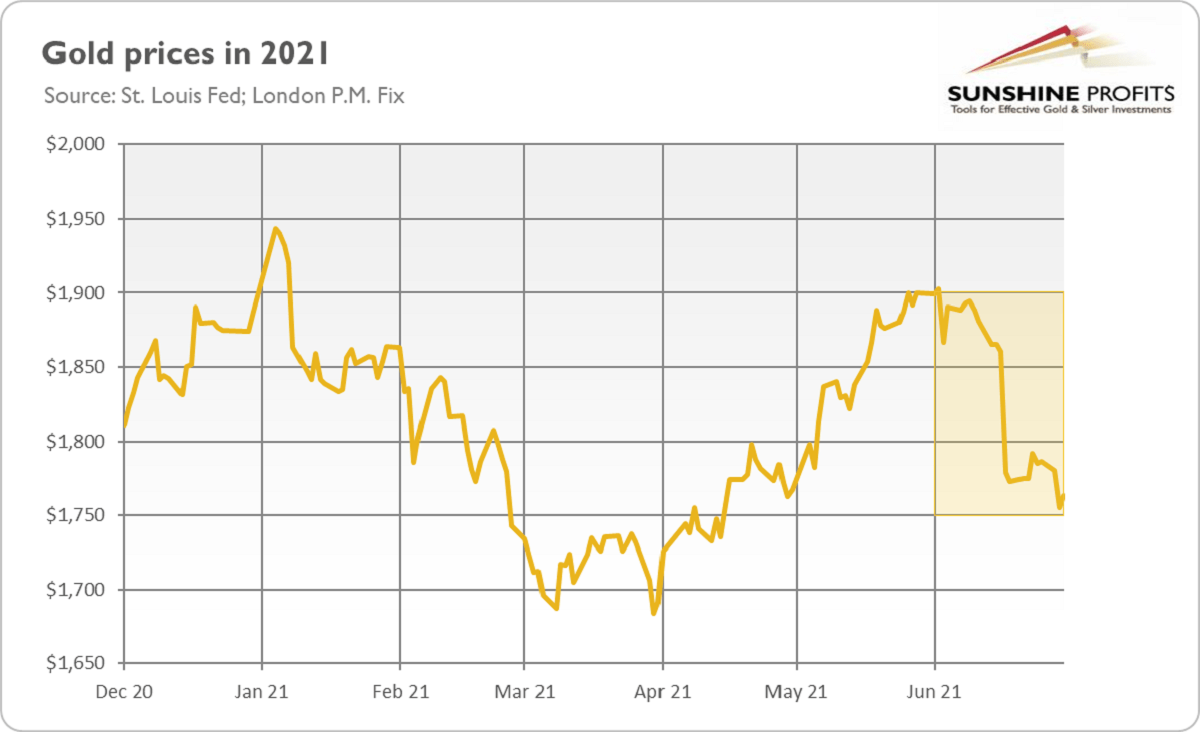 The dive was a result of the latest Fed’s dot-plot published in the aftermath of the June FOMC meeting which showed that the US central bankers could want to hike the federal funds rate earlier than previously thought . Although the dot-plot is not a reliable forecast of what the Fed will do, and a quarter-point hike in the interest rates in two years from now isn’t particularly hawkish , the change was sufficient to alter the crowd psychology. As a result, the market narrative has shifted from “the Fed will tolerate higher inflation, staying behind the curve” to “the Fed won’t allow inflation to run wild and will hike earlier because of the stronger inflationary pressure”.

The subsequent comments from the Fed officials helped to consolidate the new narrative . For example, only this week Thomas Barkin, Richmond Fed President, noted that the US central bank has made “substantial further progress” toward its inflation goal in order to begin tapering quantitative easing . Meanwhile, Fed Governor Christopher Waller stated that the Fed could begin tapering as soon as this year to have an option of hiking interest rates by late next year. Robert Kaplan, Dallas Fed President, went even further, saying that he “would prefer [a] sooner” start of reducing the pace of Fed’s asset purchases than the end of the year.

The hawkish U-turn among the Fed led to higher nominal bond yields , real interest rates , and a stronger US dollar , which also contributed to gold’s weakness. Meanwhile, inflation expectations reversed in June after a peak in May, which increased the real yields and also hit gold prices.

What do the changes in the Fed’s stance on the monetary policy and the market’s new narrative imply for gold? Well, the hawkish revolution is fundamentally negative for the yellow metal . Investors are now less worried about higher inflation , as they believe that the Fed will tighten its monetary policy sooner than previously thought. Such expectations boost the market interest rates, making the dollar more attractive compared to its major peers, while non-interest-bearing assets such as gold become less alluring.

However, this narrative, like all narratives, may quickly change. If we see more disappointing economic data coming, the Fed could return to its previous dovish stance . Also, if high inflation turns out to be more persistent or disruptive than expected, the demand for inflation hedges or safe-haven assets such as gold may increase again.

Furthermore, if inflation turns out to be merely transitory, as the Fed and the pundits believe, the US central bank will remain behind the curve, and gold may survive . Or, the Fed will have to lift the interest rates aggressively, increasing the risk of recession .

What is important here, the yield curve has already flattened. It is still high and far from the negative territory, but the peak is behind us. Thus, gold will suffer initially because of the hawkish Fed only to rebound later during the next economic crisis . But well, it seems that gold indeed needs a new catalyst to rally , and without any crises or dovish signals sent by the Fed, it will struggle .