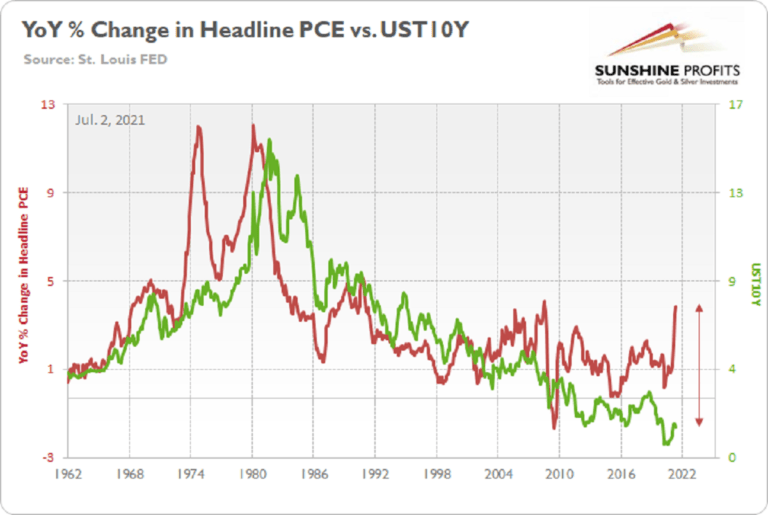 The inflationary cauldron continues to boil. However, the USDX and Treasuries are undervalued relative to U.S. GDP growth prospects. What’s going on?

The Rising Tide of Inflation

While investors are all-in on the U.S. Federal Reserve’s (FED) “transitory” narrative, the inflationary cauldron continues to boil. Case in point: the IHS Markit released its manufacturing PMI on Jul. 1 and the report read that “June PMI data from IHS Markit signaled the joint-fastest improvement in the health of the U.S. manufacturing sector on record.” 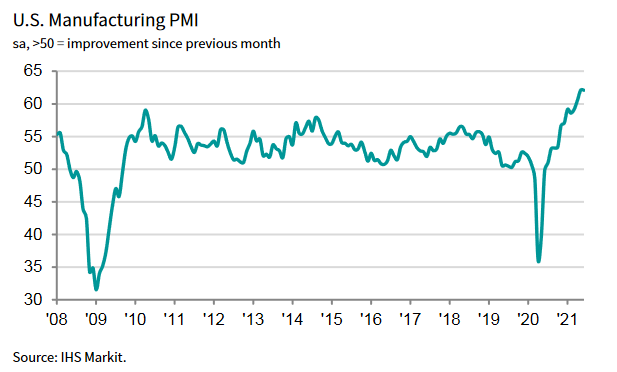 “New orders growth remained substantial in June, despite the rate of expansion easing from May's historic high. The pace of increase was the second-fastest on record, with firms continuing to note marked upturns in demand from both new and existing clients.”

“Suppliers' delivery times lengthened to the greatest extent on record in June, as component shortages and transportation issues exacerbated supply-chain woes. Subsequently, vendors hiked their charges. Input costs rose at the fastest pace since data collection for the series began in May 2007 , as greater global demand for inputs put pressure on material shortages. Manufacturers were able to partially pass on higher costs to clients, however, as the rate of charge inflation matched May's historic peak .”

On top of that, the J.P.Morgan Global Manufacturing PMI (also released on Ju1. 1) had a similar message:

Thus, while FED Chair Jerome Powell told Congress on Jun. 22 that the U.S. economy "is still a ways off” and that "we will not raise interest rates preemptively because we fear the possible onset of inflation., we will wait for evidence of actual inflation or other imbalances:”

The bottom line? Powell’s gambit is a classic case of ‘do as I say, not as I do.’

To that point, The International Monetary Fund (IMF) raised its 2021 U.S. GDP growth forecast from 4.6% to 7.0% on Jul. 1 (pending the passage of U.S. President Joe Biden’s recent infrastructure package).

“As the pandemic eases and demand for consumer services surges, real (inflation-adjusted) GDP is projected to increase by 7.4% and surpass its potential (maximum sustainable) level by the end of 2021.

In CBO’s projections, employment grows quickly in the second half of 2021 —reflecting increased demand for goods and services and the waning of factors dampening the supply of labor, including health concerns and enhanced unemployment insurance benefits.”

In addition, the group’s “PCE price index” forecast of a 2.8% YoY rise is still too low, and forthcoming prints will likely surprise to the upside.

Piecing it all together: with economic growth projected to reach the levels last seen in 1984, does the FED need to purchase a combined $120 billion worth of Treasuries and mortgage-backed securities per month? As a reminder, the FED’s daily reverse repurchase agreements averaged $642 billion in June and the transactions essentially negated 5.35 months’ worth of QE in the last month alone. However, the psychological effect isn’t the same as an actual taper announcement. 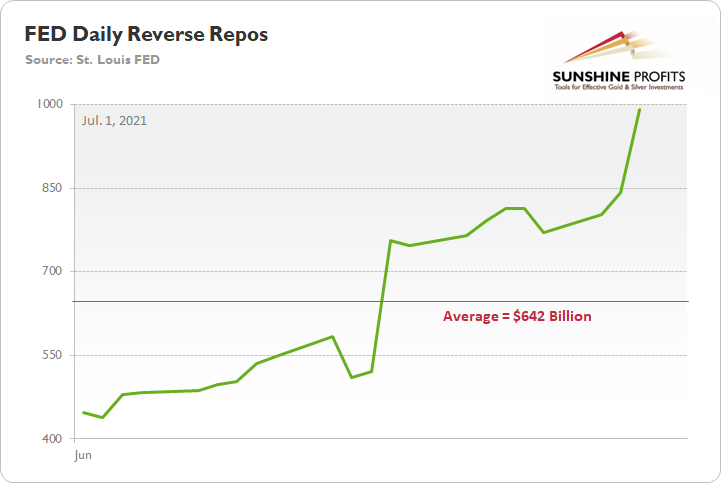 On top of that, the last time U.S. economic growth hit 7%, the USD Index and the U.S. 10-Year Treasury yield reached highs of 151 and 11% respectively.  And while similar strength is unlikely to emerge this time around, it’s still a reminder of how low the pair’s current readings are relative to the prospective GDP growth.

To that point, while the long-end of the U.S. yield curve remains in its own little world, Goldman Sachs expects the U.S. 10-Year Treasury yield to end 2021 at 1.90% (roughly 44 basis points higher than the Jul. 1 close). 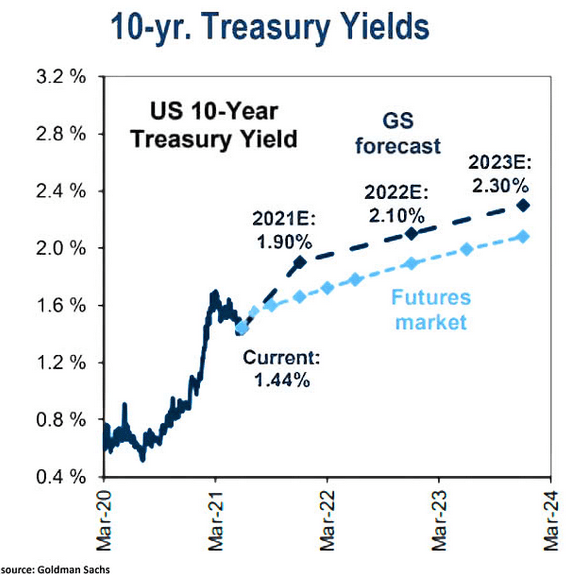 Likewise, Robin Brooks, chief economist at the Institute of International Finance (IIF), predicts that the U.S. cocktail of growth and inflation should result in higher long-term interest rates in the coming months.

As further evidence, following the spike in the headline PCE Index on Jun. 25, the U.S. 10-Year Treasury yield is now trading at its lowest level relative to realized inflation since the mid-1970s. 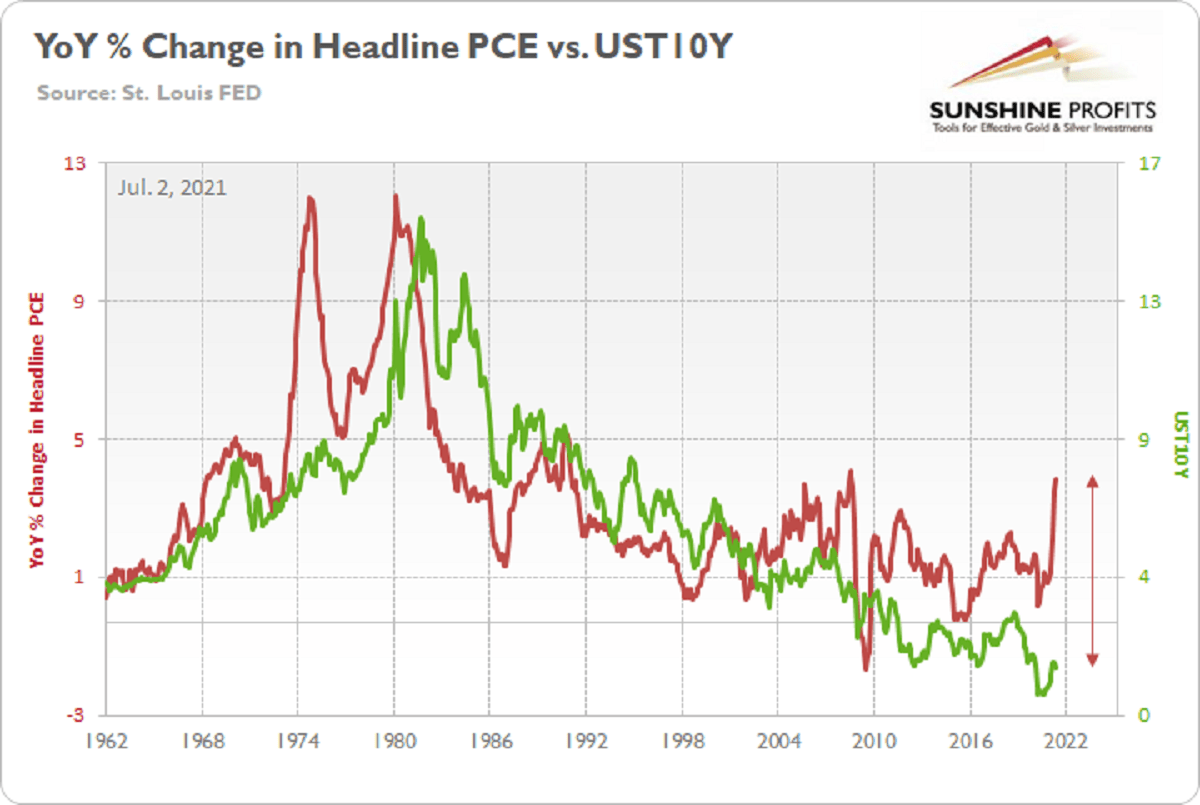 To explain, the green line above tracks the U.S. 10-Year Treasury yield, while the red line above tracks the YoY percentage change in the headline PCE Index. If you analyze the relationship, it’s been nearly 50 years since the U.S. 10-Year Treasury yield has underperformed to this degree. As a result, while the front-end of the U.S. yield curve (2s, 3s, 5s) is destined to move higher as the taper talk heats up, participation from the long-end (10s, 20s, 30s) will only add to the PMs’ ills.

The USD Up, the EUR Down

Furthermore, with the FED’s hawkish shift lighting a fire under the greenback, U.S.-Eurozone growth differentials should also propel the USD Index higher over the medium term. For context, the EUR/USD accounts for nearly 58% of the movement of the USD Index.

To that point, I warned on Apr. 8 that a shift in the central bank sentiment would uplift the U.S. dollar over the medium term.

And with a current reading of 59%, you may be thinking: the ‘death of the dollar’ is unfolding before our eyes. Keep in mind though: global central banks often behave like average investors. Meaning? They buy after an uptrend is already in place. Case in point: since 1995, 83% of major USD Index bottoms  were followed by an increase  in allocated FX reserves . For context, the largest increase occurred from 2014 to 2015 (2.67%), while the lone decrease occurred from 2018 to 2019 (– 1.21%). 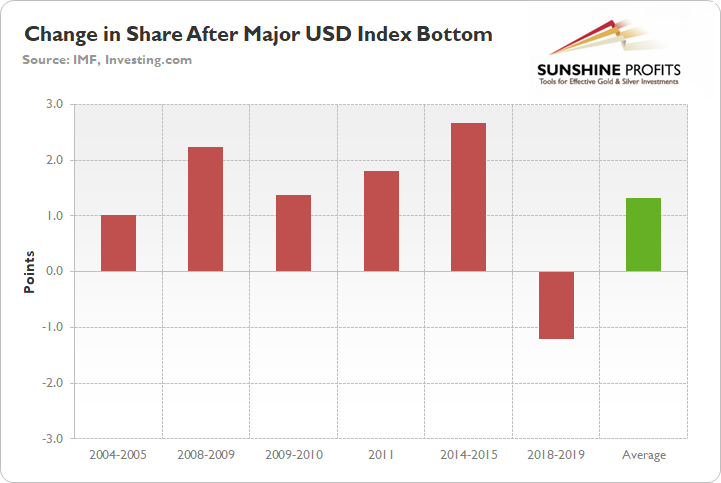 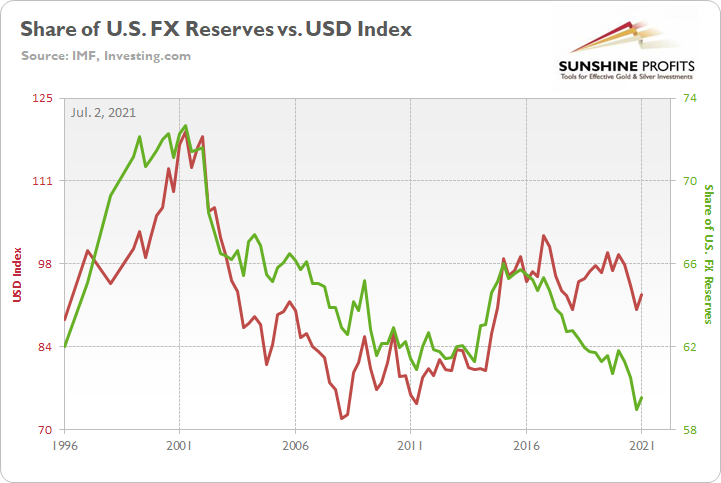 In addition, I warned that the euro would likely head in the opposite direction:

The euro is another critical component. Following the same script, global central banks often buy the euro after it rises and sell the euro after it falls. More importantly though, euro-share has a seven-year correlation of 0.92 with the EUR/USD . For context, euro-share is currently 0.30 SD above its seven-year average, which implies a ~62% chance of moving lower in the coming months. 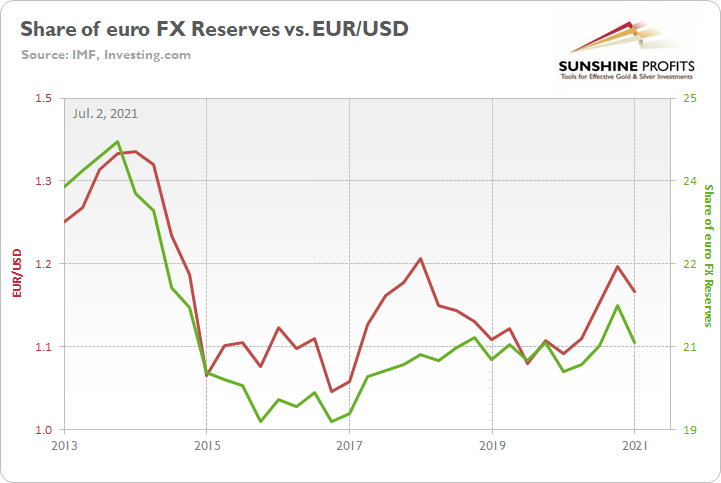 While central banks have warmed up to the U.S. dollar once again, its current share of allocated FX reserves is still 1.53 SD below its 25-year average (which implies a ~93.7% chance of moving higher). Thus, if the momentum continues, it could add to the PMs selling pressure in the coming months.

Finally, with U.S. nonfarm payrolls scheduled for release today, I noted that outperformance likely won’t materialize until August or September. However, with initial jobless claims (released on Jul. 1) coming in better than expected – at 364,000 vs. 390,000 expected – the U.S. Department of Labor (DOL) revealed that “this is the lowest level for initial claims since March 14, 2020, when it was 256,000.”

And while it’s more of a wild card at this point, U.S. nonfarm payrolls have been lagging behind the recent decline in initial claims. 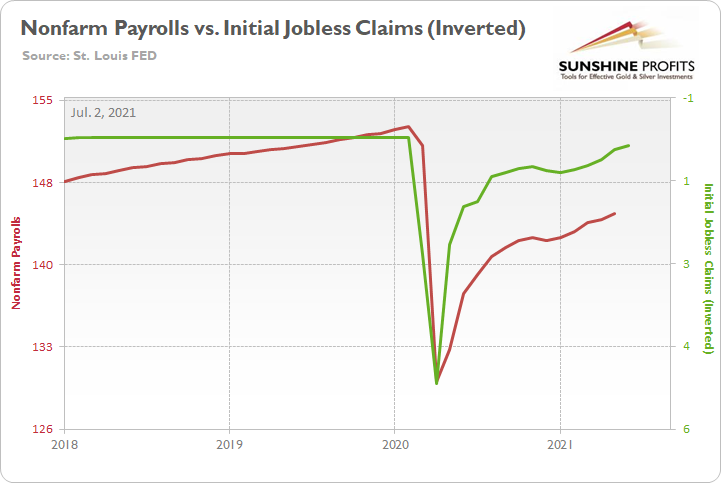 In conclusion, the PMs remain range-bound, as they debate whether the next catalyst will be bullish or bearish. However, with U.S. economic growth poised to outperform in the coming months, not only are the USD Index and Treasury yields (both long and short) undervalued relative to U.S. GDP growth prospects, but inflation is surging, and a forthcoming taper should only add to their upward momentum. As a result, the medium-term outlook remains bearish for the precious metals market, even though the long-term outlook is bullish.