Something incredible happened last year in the Philippines.

Earning From Playing A Video Game

Everyday people were making up to $3,500/month… from playing a video game.

That might not sound like a lot of money to you and me. But you should understand something.

The typical Filipino makes around $878 per month.

And these people making thousands of dollars a month aren’t professional gamers. They’re not part of an esports team. And they don’t receive money from sponsors.

Axie Infinity is one of today’s most revolutionary cryptocurrency projects. It pioneered the play-to-earn (P2E) model. Here’s how it works…

Players start by buying three creatures known as Axies, which cost around a minimum of $40 each right now (priced in Ethereum (ETH)). These creatures are unique non-fungible tokens (NFTs) that players use to cross-breed and complete quests.

A non-fungible token (NFT) is a certificate of ownership stored on a blockchain. Think of it as a virtual deed.

Each NFT is tied to a specific item, like artwork or a video clip. It acts as a unique serial number certifying the authenticity and ownership of that digital asset. In Axie Infinity, your Axies are NFTs and you get to play the game with them.

Over the summer, the barrier to entry was high for Axie Infinity. The average cost of a single Axie was well over $300. This made it hard for many gamers to enter the space.

But one of Axie Infinity’s revolutionary features opened the door for thousands of players. You see, if you can afford to buy many Axies, you can sponsor players by “renting” out your Axies for them to use. In exchange, you can get a percentage of what they earn by playing the game.

Play-to-earn (or P2E) is exactly what it sounds like. It’s when people get paid to play video games.

That may not be something you’re personally into. But plenty of people are turning P2E games into a second source of income.

The gaming industry is the world’s largest media category, valued at $336 billion and growing rapidly. Yet most of this revenue goes to a handful of companies like Microsoft (NASDAQ:MSFT), Sony (NYSE:SONY), Nintendo, and Electronic Arts (NASDAQ:EA).

Thanks to P2E games, everyday gamers can now cash in on their favorite hobby.

But here’s the thing.

You never had to play Axie Infinity to get rich off its incredible success. All you had to do was own its token.

The popularity of this model explains how the game managed to surpass $3 billion in all-time sales last year. At one point over the summer, Axie Infinity was generating more revenue than Ethereum, the second-largest cryptocurrency after bitcoin (BTC).

The explosive growth of the Axie Infinity platform ignited a historic rally in the price of AXS—Axie Infinity’s token. 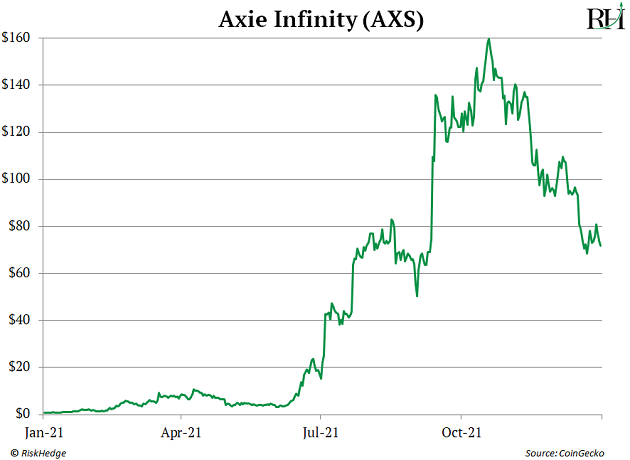 AXS was one of the top-performing cryptos of 2021. And its enormous success has sent shockwaves through the crypto world.

Virtually every new blockchain game is now adopting the P2E business model. Many of these new projects are delivering lifechanging returns to investors who recognize the incredible potential of P2E.

DeFi Kingdoms (JEWEL)—another P2E—reached highs of 13,789% since its token was launched in August. It’s easily one of the best-performing tokens in the entire cryptocurrency market. 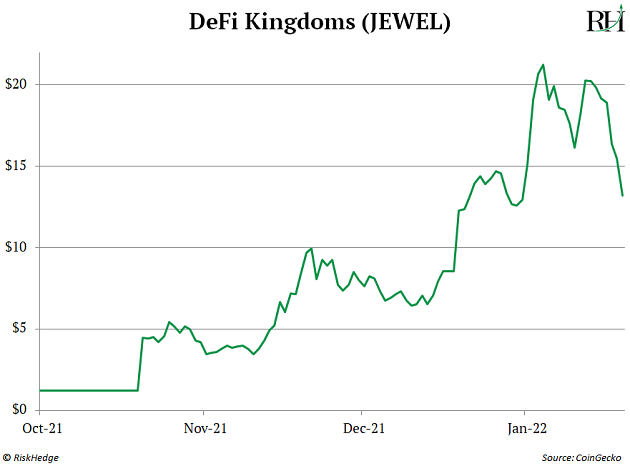 Vulcan Forged PYR (PYR)—a project that serves as a launchpad for P2E games—surged 11,751% between April and November 2021.

I expect many more multi-baggers to come out of the P2E sector. So, this is definitely a space I’ll be watching closely in 2022 and beyond.