Charts That Explain the Economic Recovery

1) I knew that the current economic recovery is much stronger than the tepid one following the global financial crisis – mostly the result of massively greater government fiscal and monetary stimulus – but I hadn't fully appreciated just how much stronger until I saw these charts in the New York Times: Seven Charts That Explain the Economic Recovery So Far. Excerpt:

Early Friday, the government reported that the economy added 850,000 jobs last month – a welcome pickup from the slower pace of jobs growth over the past three months and a sign that overall economic growth is tracking stronger than in the first quarter of the year.

We are still roughly 7 million jobs down from pre-pandemic levels of employment, unemployment among Black and Hispanic workers remains distressingly high, and millions have yet to return to the labor force. But if policymakers hold steady, we are also on the verge of creating a foundation for a more inclusive, resilient recovery – much more robust than what we experienced after the Great Recession, despite having suffered a much bigger jobs hit. 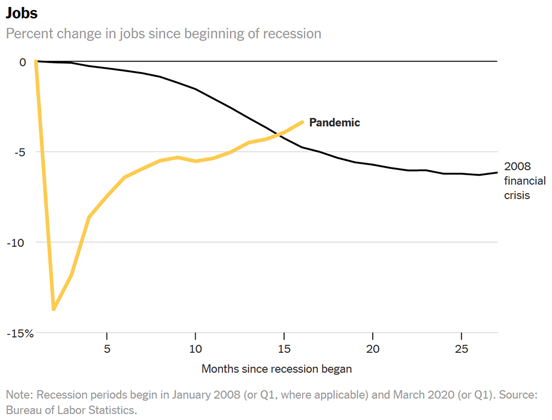 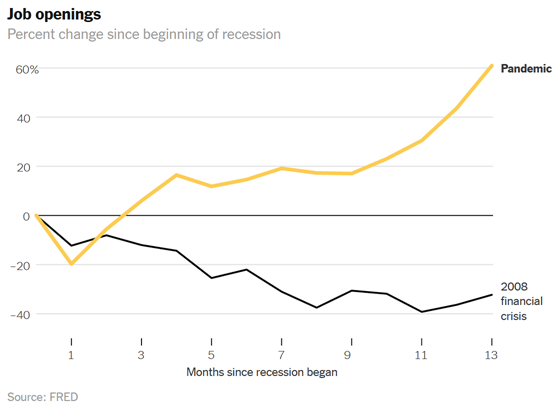 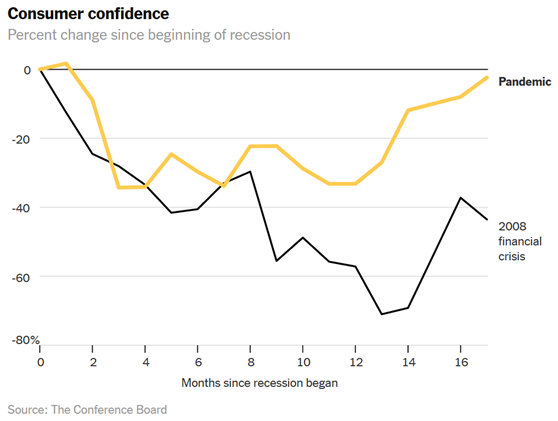 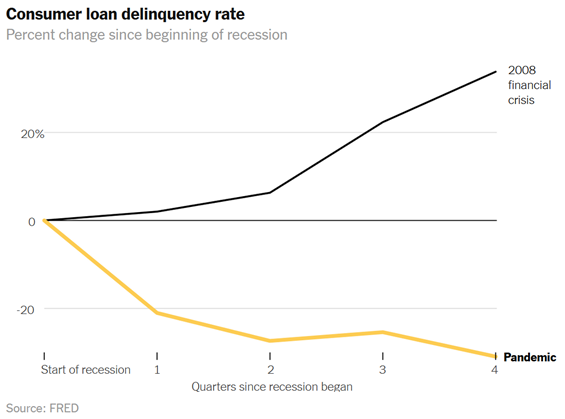 2) Only one chart in the Times article is troubling – this one, showing rising inflation: 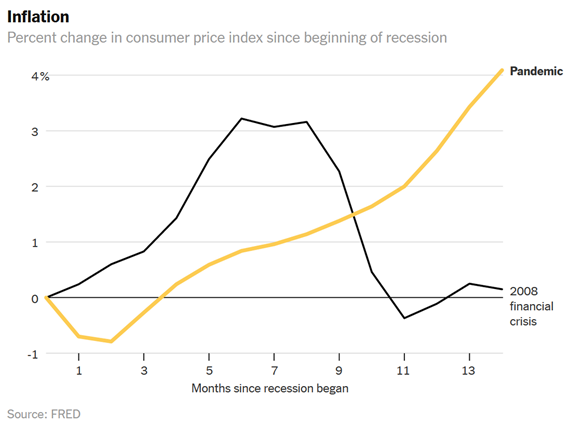 This Times article, however, also shows the folly of trying to predict inflation: Higher Inflation Ahead? Maybe. But Don't Even Try to Predict It. Excerpt:

Inflation has become one of those inescapable topics.

In certain circles, everyone seems compelled to talk or write about surging prices, and some economists and bond mavens even sound as though they know where inflation is heading.

But there are good reasons to question that aura of certainty.

In fact, thanks to some new research, one thing is clear: Bond traders and academic and corporate economists don't have any real ability to predict whether inflation will rise or fall in the months and years ahead. Neither do consumers.

3) Though I continue to believe that electric-vehicle ("EV") maker Tesla's stock (TSLA) is neither a good long nor a good short, I continue to closely follow the company because it is so interesting, educational, and entertaining.

Below are two articles I shared with my Tesla e-mail list on Tuesday (you can join it by sending a blank e-mail to: [email protected])...

a) This story was on the front page of the Times: Tesla Says Autopilot Makes Its Cars Safer. Crash Victims Say It Kills. Excerpt:

Benjamin Maldonado and his teenage son were driving back from a soccer tournament on a California freeway in August 2019 when a truck in front of them slowed. Mr. Maldonado flicked his turn signal and moved right. Within seconds, his Ford Explorer pickup was hit by a Tesla Model 3 that was traveling about 60 miles per hour on Autopilot.

A six-second video captured by the Tesla and data it recorded show that neither Autopilot – Tesla's much-vaunted system that can steer, brake, and accelerate a car on its own – nor the driver slowed the vehicle until a fraction of a second before the crash. Fifteen-year-old Jovani, who had been in the front passenger seat and not wearing his seatbelt, was thrown from the Ford and died, according to a police report.

The accident, which took place four miles from Tesla's main car factory, is now the subject of a lawsuit against the company. It is one of a growing number of crashes involving Autopilot that have fueled concerns about the technology's shortcomings, and could call into question the development of similar systems used by rival carmakers. And as cars take on more tasks previously done by humans, the development of these systems could have major ramifications – not just for the drivers of those cars but for other motorists, pedestrians and cyclists.

My take: There's no question that Musk and Tesla have wildly over-promoted Autopilot and FSD, which no doubt has contributed to drivers being more reckless than they otherwise might have been.

That said, by all accounts the systems work very well... So, net-net, they may reduce accidents and save lives.

But there's also evidence to the contrary: When my friend Chris Brown of Aristides Capital (aka Midwestern Hedgie) did an apples-to-apples comparison in 2018 (using the Models S and X... the Model 3 wasn't out yet), he found that Teslas were far more dangerous than comparable cars: Tesla's Driver Fatality Rate is more than Triple that of Luxury Cars (and likely even higher). (For more on this debate, see my March 31 e-mail.) This is an important discussion, but the Times story doesn't even touch on it...

The Perils of Betting on Beijing

b) With the shares of Chinese ride-hailing company DiDi Global (DIDI) crashing this week due to actions by China's regulators, Tesla investors should be paying close attention to this: Tesla's Fall From Grace in China Shows Perils of Betting on Beijing. Excerpt:

There's little-to-no concrete evidence there's anything wrong with the brakes in Tesla's China-built cars. What is clear, however, is that the remarkable honeymoon Elon Musk enjoyed in the world's most populous nation is over. After receiving red-carpet treatment from government officials, who granted Tesla the unprecedented concession of allowing it to wholly control its local subsidiary, the carmaker is now being forced to rethink its strategy, from customer service to public relations, in a market that's key to Musk's long-term ambitions.

The overhaul is a response to an unusual degree of attention from regulators, as well as a rash of negative press coverage and online criticism. Last month, the Chinese government ordered a recall of almost all the cars Tesla has sold in the nation – more than 285,000 in all – to address a software flaw. At the same time, the vehicles are being banned from some government facilities over concerns they could send data to the U.S., and local carmakers like Nio (NIO) and XPeng (XPEV) are mounting a vigorous challenge to Tesla's dominance, winning over consumers with increasingly stylish designs.

None of these problems, of course, are unfamiliar to most foreign businesses in China, where a crash in consumer perceptions is often just one social-media storm away. But to a certain extent, that's the point: Tesla's high-tech halo, and Musk's star power, may no longer be enough to protect it from the risks that others face there. The company appears to have misjudged the strength of its ties to the country's leadership, a mistake that could threaten Tesla's growth prospects in its second-largest market. It also provides compelling evidence of how fraught operating in China can be, even for those who appear to enjoy every possible advantage...