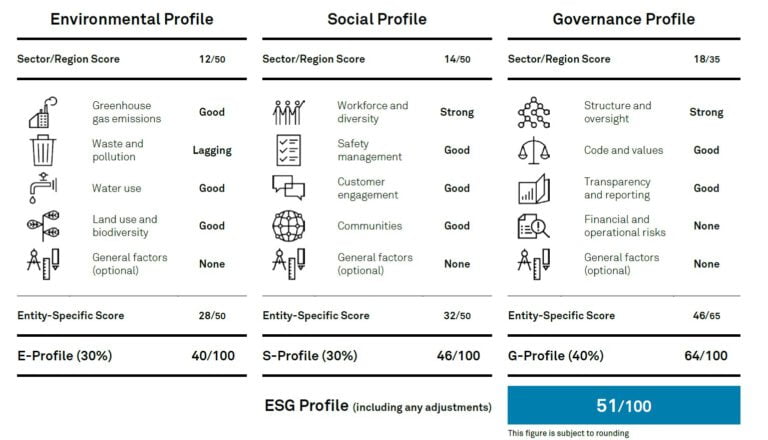 S&P Global Ratings said today that Siberian Coal Energy Co. (SUEK) scored 44 in its ESG Evaluation. On our scale of 0 to 100, a higher ESG Evaluation indicates a stronger sustainability assessment. The company’s ESG Evaluation of 44 is the result of an ESG profile of 51, combined with emerging preparedness.

Siberian Coal Energy Company (SUEK) operates in the coal energy business. The company recently expanded beyond coal mining (70% of assets), by purchasing coal power generation assets (20%), and is expanding its logistic assets (10%), which include railcars and ports. All its assets are in Russia, and the company is a major coal exporter, with revenue exposure to Asia, and Europe to a lesser extent. Its logistic assets are primarily used to export coal and other mining goods, although these assets are equipped to expand into other goods.

The ESG Evaluation score of 44 incorporates the company’s current position as a coal energy company as well as potential from its expanding logistics business. While the coal sector faces increasingly immediate environmental and social risks, SUEK’s mining segment outperforms peers on greenhouse gas (GHG) emissions. We believe this demonstrates that SUEK is more focused on improving energy use than decarbonization. At present, the company's power generation lags the rest of the sector on emissions, and lags overall on other pollution indicators. SUEK is generally in line with peers for its most material factors of safety and communities, but we note strong performance in workforce and diversity. Its governance structure compares positively to local standards and well with international standards.

We assess the company’s preparedness as emerging, since it does not have an action plan to transition from coal or rapidly decarbonize, yet we believe SUEK’s strategy does not pose near-term financial risk. We note the company has taken some steps to reduce exposure to coal prices and invested in logistics, but its near-term focus is still expanding coal production. The board and executive management are aware of the challenges of implementing an adaptive and sustainability-focused culture into its workforce, which we view currently as developing.

SUEK has emerging preparedness, since the new board, and an executive team that has made good past strategic decisions, have not yet come up with an action plan to respond to a more rapid energy transition scenario. SUEK is developing its culture to become more adaptive and focused on sustainability.

SUEK is in the process of developing a long-term strategy for its business to remain sustainable after demand and prices for coal drop. We note that the near-term strategy still heavily relies on coal, but unlike most of other coal miners, the company already started investing in businesses that could operate in a post-coal world. Our score reflects challenges faced by the company as it navigates the energy transition.

SUEK operates in coal mining (70% of assets), coal power generation (20%), and logistics (10%, primarily ports) with all its assets located in Russia. These sectors have considerable negative impact on the environment, with coal extraction and combustion resulting in GHG emissions and air pollution, and also potentially causing land destruction, water contamination, and threatening biodiversity. SUEK’s exposure and adaptation to physical climate risks are also an important issue, given the vulnerability of its logistic infrastructure to chronic and acute events.

SUEK’s GHG emissions result from a mix of lower emissions than peers' in the mining sector, and higher emissions than peers' in the power generation sector. SUEK’s relatively strong performance versus its mining peers comes from its focus on high calorific value (CV) coal, which is more efficient than conventional coal, thereby reducing GHG emissions during the combustion process. In addition, SUEK focuses on running energy-efficient mines, though we view this as relatively common in the sector. However, in the power generation business, SUEK has no immediate plans for a transition to alternative fuels, hence we do not foresee any substantial reduction in its GHG emissions unlike many of its peers. SUEK’s investments in the decarbonization of its power generation segment focus mainly on cogeneration or combined heat and power plants, which are more efficient than the conventional coal power plants and aged boiler. SUEK is well on track to reach its target of 100% of heat coming from cogeneration by 2023 (currently 96%). However, we view the impact of these efforts as relatively marginal in light of its power segment’s overall GHG emissions.

SUEK’s performance on waste is lagging, primarily due to significantly higher air pollutants metrics (CO, NOx, SO2) than peers'. This is despite investment in upgraded equipment, advanced coal burning technologies, and filters for coal power generation plants, because these upgrades are quite standard in the sector. In addition, SUEK performs poorly on water pollution. Water discharged from coal mining facilities has not been cleaned in line with regulatory requirements, which, though not uncommon amongst local peers, compares negatively to global industry peers and resulted in regulatory fines. We believe its performance in this area may improve, since SUEK is building and renovating wastewater treatment facilities.

SUEK’s sites are not located within protected areas, which limits its exposure to land use and biodiversity risks. Its approach to land use follows regulatory requirements, but is less sophisticated than that of its more-advanced mining peers. SUEK’s production method of open-pit coal mines (76%; which use large areas of land) exceeds underground mines (24%), which we view negatively. Finally, we view positively that SUEK uses standard reclamation projects on disturbed land and contributes to the restoration of aquatic biodiversity.

SUEK operates in water-sensitive regions, and its water consumption is in line with global peers' from the mining sector. It follows a common practice of using a closed water cycle and recycling water to improve its resilience.