ValueWalk
Home Stocks What Was Up When GameStop Tanked 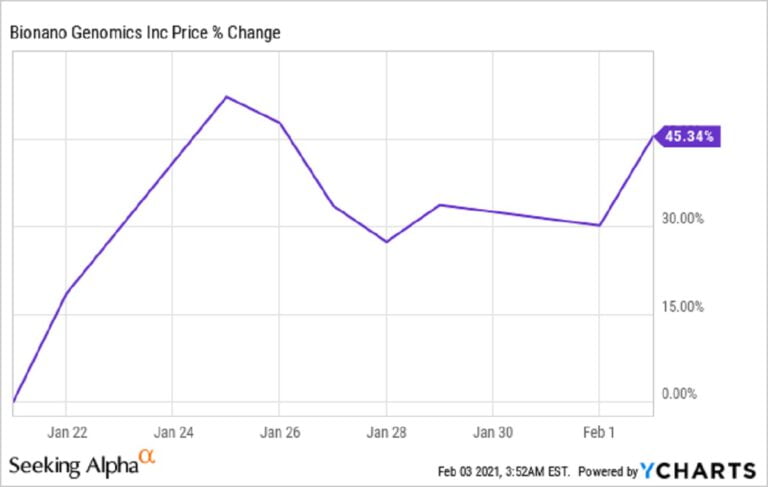 SLV And GameStop Had Something In Common

In our last post (Silver Isn’t The Next GameStop), we wrote that, unlike GameStop, the WallStreetBets crowd wasn’t buying silver, or silver ETFs such as SLV. In response, on Slope of Hope, our friend Tim Knight quipped,

It is, inasmuch as they are both down double-digit percentages today!

By the end of the day, SLV had trimmed its losses to single digits, down 8.3%, while GameStop had dropped a whopping 60%. Let's look at a few names that were up on Tuesday, and which might have more room to run.

Bionano Genomics (BNGO) was up 11.71% on Tuesday. We mentioned this one in a post last week (GameStopped). Since then, it's down 1.54%. It's up 45.34% since we presented it to Portfolio Armor subscribers on January 21st.

On January 21st, BNGO was our #1 name overall, based on our analysis of its past returns and options market sentiment on it. As of Tuesday, it was #56 on our ranking.

Plug Power (PLUG) was up fractionally on Tuesday. Since we wrote about it last month (Plug Power Explodes Higher), it's up about 19.5%. Since we first presented it to our subscribers last November 12th, it's up 174%.

PLUG was #7 in our daily ranking as of Tuesday.

NNDM was our #13 name as of Tuesday's close.

We have to confess that we don't know exactly what MicroStrategy (MSTR) does. We don't do fundamental analysis, and when this ticker first popped up among our top names, we assumed it referred to Monster Energy. But apparently MicroStrategy has something to do with Bitcoin.

I have never seen so many CEOs sign up to attend one of our events. Send yours, or come join our sessions & report back to your team. Every company can benefit from plugging into the #Bitcoin Monetary Network. https://t.co/17j3OZuswC

One of our Twitter correspondents, a Bitcoin bull, believes that MicroStrategy's CEO Michael Saylor will be one of the richest men in the world in the next several years.

MicroStrategy was up 8.41% on Tuesday. Since we mentioned it our Big Gains From Small Names post, it's up 104%. Since we first presented it to our subscribers on December 17th (alongside NNDM), it's up 131%.

As of Tuesday, MSTR was #10 in our daily ranking.

Wrapping Up: Room To Run

When you present your top names as a service, you've got a basic marketing challenge. On the one hand, if you share all your current top names in public articles, readers will have less incentive to subscribe. On the other hand, if you don't share any top names publicly, readers may doubt your stated performance. We've attempted to split the difference here by occasionally writing about our top names shortly after presenting them to subscribers. In the MSTR example, most of the gains came after we wrote about it publicly. We're not suggesting any causation there, just pointing out that our top names often have more room to run. As always, each of our top ten names can be cost-effectively hedged (that's part of our screening process), and we suggest readers who plan to buy them consider hedging them using our website or our iPhone app.