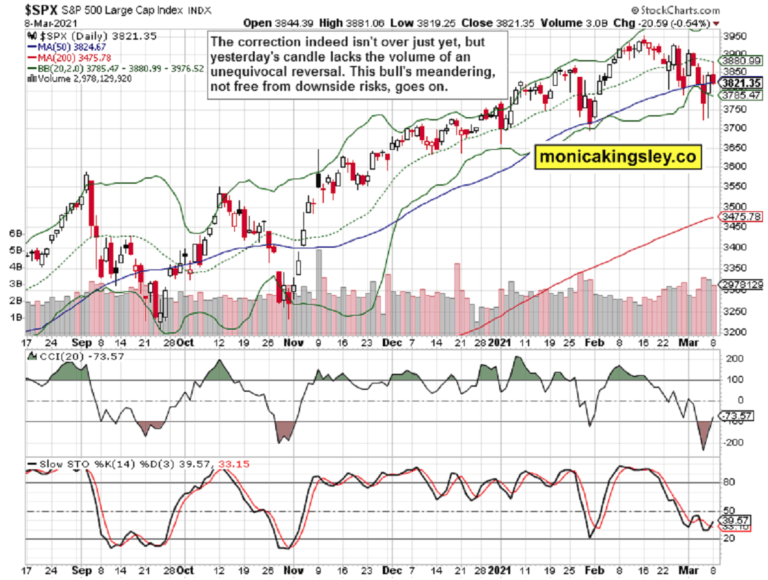 Stocks spiked higher, but not before going sideways to down prior on the day. And the close to the session hasn‘t been convincing either – does it count as a reversal? In my view, we haven‘t seen one yesterday really, regardless of this correction not being over just yet. There are still some cracks I tweeted yesterday about in need closing first, such as the worrying corporate bonds performance, manifest in the HYG:SHY ratio, or the technology stocks searching for the bottom (it‘s $NYFANG precisely).

The Reflation Of Economic Growth Is Working

Quoting from yesterday‘s extensive analysis spanning beyond stocks, metals and the Fed:

(…) Stocks have had a great run over the past 4 months, getting a bit ahead of themselves in some aspects such as valuations. Then, grappling with the rising long-term rates did strike.

So did inflation fears, especially when looking at commodities. Inflation expectations are rising, but not galloping yet. What to make of the rising rates then? They‘re up for all the good reasons – the economy is growing strongly after the Q4 corona restrictions (I actually expect not the conservative 5% Q1 GDP growth, but over 8% at least) while inflation expectations are lagging behind.

In other words, the reflation (of economic growth) is working and hasn‘t turned into inflation (rising or roughly stable inflation expectations while the economy‘s growth is slowing down). We‘re more than a few quarters from that – I fully expect really biting inflation (supported by overheating in the job market) to be an 2022-3 affair. As regards S&P 500 sectors, would you really expect financials and energy do as greatly as they do if the prospects were darkening?

Stocks are well positioned to keep absorbing the rising nominal rates. What has been the issue, was the extraordinarily steep pace of such move, leaving long-term Treasuries trading historically very extended compared to their 50-day moving averages. While they can snap back over the next 1-2 weeks, the 10y Treasury bond yield again breaking 1.50% is a testament to the Fed not willing to do anything at the moment. Little does the central bank care about commodities moves, when it didn‘t consider any market moves thus far as unruly.

Gold market offered proof of being finally ready for a rebound, and it‘s visible in the closing prices of the yellow metal and its miners. Being more than a one day occurence, supported by yesterday presented big picture signals,  the market confirmed my yesterday‘s suggestion of an upcoming gold. It appears we‘ll get more than a few days to assess the legs this rally is made of, facilitating nimble charting of the waters ahead my usual way:

(…) Just as I was calling out gold as overheated in Aug 2020 and prone to a real soft patch, some signs of internal strength in the precious metals sector were present this Feb already. And now as we have been testing for quite a few days the first support in my game plan, we‘re getting once again close to a bullish formation that I called precisely to a day, and had been banging the bearish gold drum for the following two days, anticipating the downside that followed.

Flexibility and broad horizons result in accentuated, numerous other portfolio calls – such as long Bitcoin at $32,275 or long oil at $58 practically since the great return with my very own site. We‘re now on the doorstep of visible, positive price outperformance in the gold miners (GDX ETF) as gold prices didn‘t break the higher bullish trend by declining through both the Mar 4 presented supports of my game plan.

As I wrote yesterday, if prices move higher from here, they have simply bounced off support, especially given the accompanying signs presented, not the least of which is the dollar getting back under pressure. Make no mistake, the greenback isn‘t in a bull market – it‘s merely consolidation before plunging to new 2021 lows. I have not been presenting any USDX declining resistance lines and breakout arguments, because prices can be both above such a line, and lower than at the moment of „breakout“ at the same time – ultimately, rising and declining supports and resistances are a play on the speed of the move, where pure inertia / deceleration / reprieve doesn‘t break the prior, higher trend. And as I called in summer 2020 the dollar to roll over and keep plunging, that‘s still what‘s unfolding.

How does it tie in to commodities and stocks? We‘re not at extreme moves in either, and I see copper, iron, oil, agrifoods as benefiting from the reflationary efforts greatly. Similarly and in spite of the $NYFANG travails, it would be ill-advised to search for stock market tops now (have you seen how well the Dow Industrials is doing?) – no, we‘re not approaching a top that I would need to call the way I did in the early Sep buying climax. This is still the time to be running with the herd, and not against it – you can ignore the noise to the contrary for both the S&P 500 and commodities have a good year ahead. As for precious metals, we might have seen the bottom already – and in any case by the current shape of things, I don‘t see it occuring quarters ahead and hundreds buck lower.

Bringing up the constant reevaluation of position‘s rationale, market reactions and narratives:

(…) It‘s the markets‘ discounting mechanism of the future that counts – just as gold cleared the deflationary corona crash in psring 2020, just as it disregarded the tough Fed tone of 2H 2018, just as it sprang vigorously higher in early 2016 stunning bears in all three cases with sharp losses over many months, or just as stocks stopped declining well before economic news got better in April 2020 or March 2009.

Make no mistake, the markets consider transitioning to a higher inflation environment already now (the Fed timidly says that reopening will spike it, well, temporarily they say), when inflation expectations are still relatively low, yet peeking higher based on the Fed‘s own data.

Gold is in a secular bull market that started in 2018 (if not in late 2015), and what we‘re seeing since the Aug 2020 top, is the soft patch I called. The name of the game now, is where the downside stops – and it‘s one of the scenarios that it has just happened, especially if gold convincingly closed back above $1,720 without undue delay. 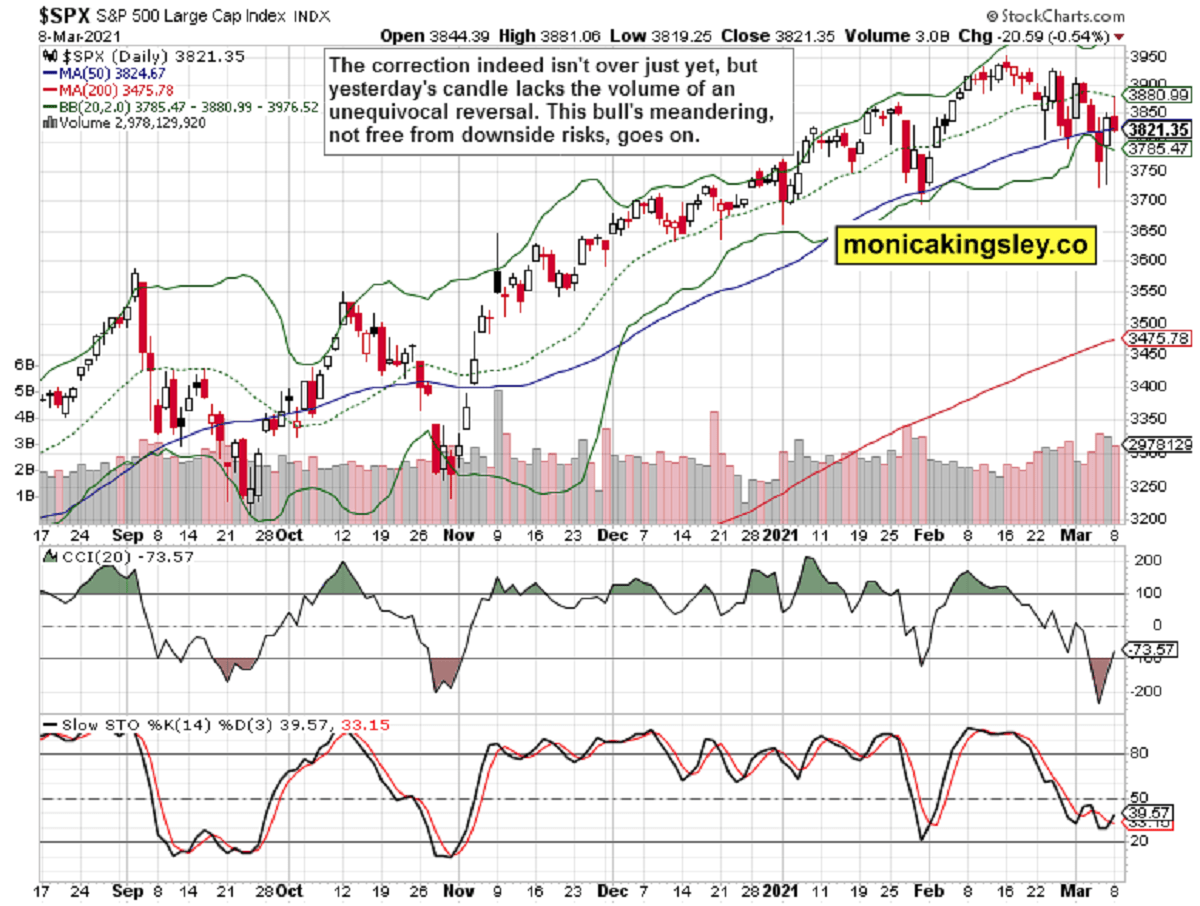 We have seen two intraday reversals to the downside yesterday, yet I think the effects would prove a temporary obstacle to the bulls only. Such candlestick patterns usually slow down the advance, but don‘t end it – and that‘s consistent with my yesterday‘s words of most of the downside being already in. Once the 3,900 zone is confidently passed, the bears would have missed the chance to reach below Thursday‘s lows. 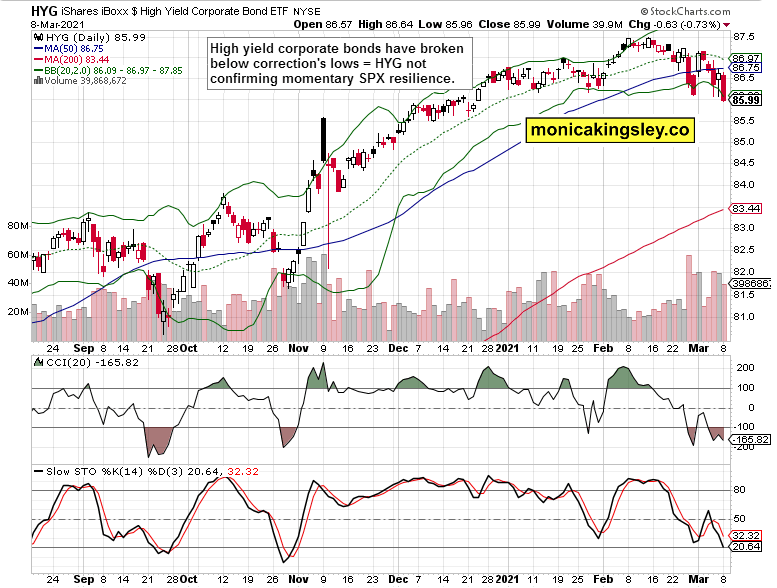 High yield corporate bonds (HYG ETF) still ilustrate ongoing fragility for they have plunged below their Feb lows. This correction doesn‘t appear to be as totally over just yet, also given the sectoral picture that I am showing you next. 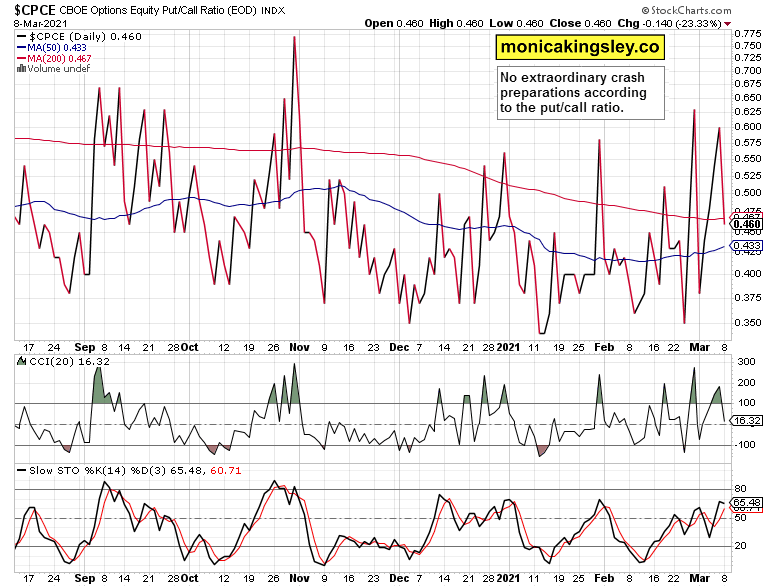 Option players clearly aren‘t concerned by yesterday‘s S&P 500 price action, and the VIX is painting a similarly neutral picture – just as the sentiment overall. Very good, we‘re primed to go higher next, from a starting position far away from the extreme greed levels. 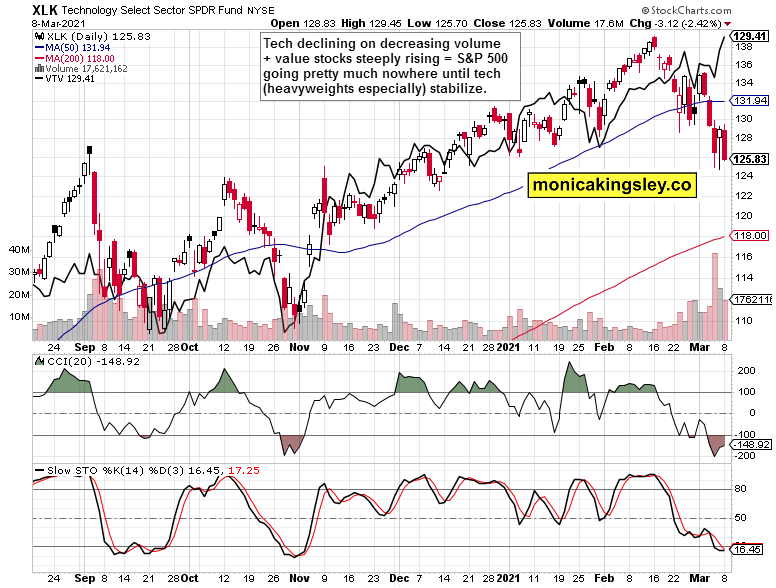 The sectoral divergence continues, and technology stocks are still the weakest link in the whole S&P 500 rebound. The big $NYFANG names, the Teslas of this world, are the biggest drag, and not until these carve out a sustainable bottom (this needn‘t happen at the 200-day moving average really), I can declare this correction as getting close to over. 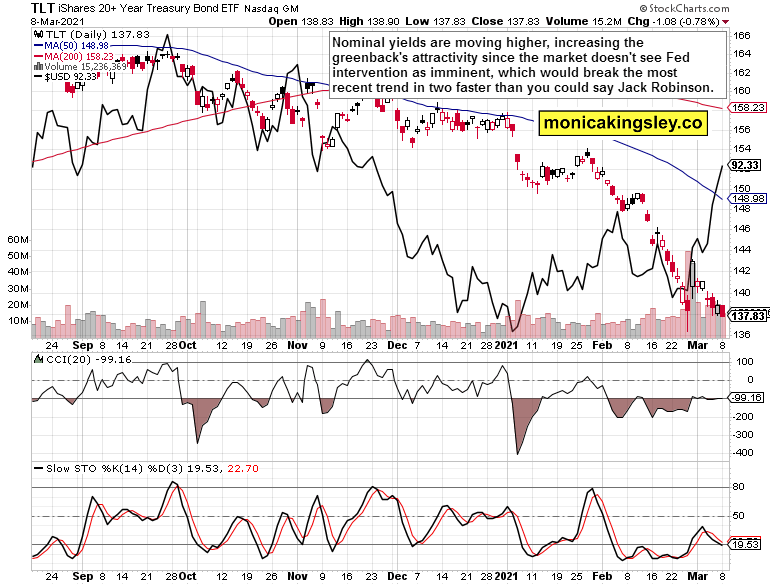 Nominal, long-term Treasury rates have at least slowed their quickening Feb pace, even in the face of no action plan on the table by the Fed – the dollar moved higher on the realization next, and it‘s my view that once new Fed intervention is raised, it would have tremendous implications for the dollar, and last but not least – the precious metals. 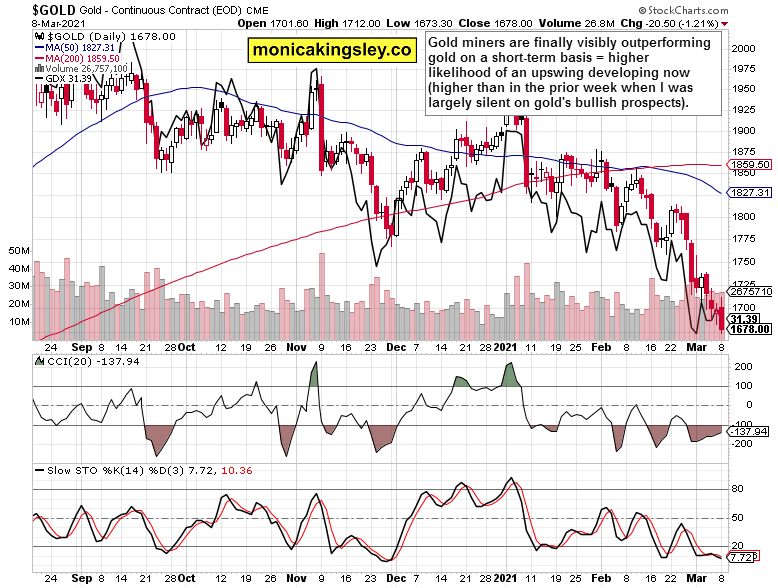 Finally, this is the much awaited sign, enabling me to sound some bullish tone in gold again – the miners are outperforming the yellow metal with more than a daily credibility, which I view as key given the lackluster gold price action before yesterday (absence of intraday rebounds coupled with more downside attempts). It would turn stronger once the gold juniors start outperforming the seniors, which is not the case yet.

Coupled with the 4-chart big picture view from yesterday, it‘s my view that the gold market is laying the groundwork for its turning:

(…) Real rates are negative, nominal rates rose fast, and inflation expectations have been trending higher painfully slowly, not reflecting the jump in commodities or the key inflation precursor (food price inflation) just yet – these are the factors pressuring gold as the Fed‘s brinkmanship on inflation goes on.

Once the Fed moves to bring long-term rates under control through intervention – hello yield curve control or at least twist – then real rates would would be pressured to drop, which would be a lifeline for gold – the real questions now are how far gold is willing to drop before that, and when that Fed move would happen. Needless to add as a side note regarding the still very good economic growth (the expansion is still young), stagflation is what gold would really love.

Silver is carving out a bottom while both copper and platinum are turning higher already – these are That‘s the essence of one of my many profitable plays presented thus far – long silver short gold spread – clearly spelled out as more promising than waiting for gold upswing to arrive while the yellow metals‘ bullish signs have been appearing through Feb only to disappear, reappear, and so on.

Stocks haven‘t seen a real reversal yesterday, but more backing and filling till the technology finds bottom, appears due. The medium-term factors favor the bulls, but this correction isn‘t over yet, definitely not in time.

Now, gold can show some strength – and silver naturally even more. The signs overall favoring a rebound, are appearing with increasing clarity for the short term, and the nearest weeks will show whether we have made a sustainable bottom already, or whether the $1,670 zone will get tested thoroughly. The bulls have the upper hand now.