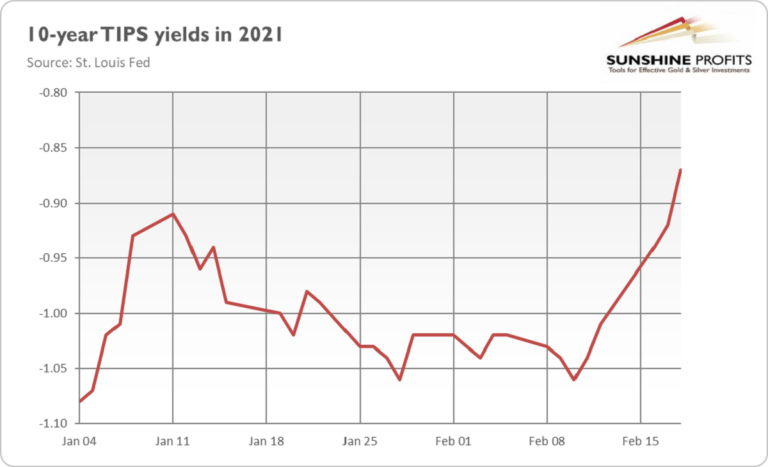 The recent FOMC minutes are hawkish and negative for the price of gold, but the Fed will remain generally dovish for some time.

The Recent FOMC Minutes Are Bad For Gold

Last week, the Federal Open Market Committee (FOMC) published minutes from its last meeting in January . They reveal that Fed officials became more optimistic about the economy than they were in December. The main reasons behind the more upbeat economic projection were the progress in vaccinations, the government’s stimulus provided by the Consolidated Appropriations Act 2021, and the expectations of an additional sizable tranche of fiscal support in the pipeline:

Most participants expected that the stimulus provided by the passage of the CAA in December, the likelihood of additional fiscal support, and anticipated continued progress in vaccinations would lead to a sizable boost in economic activity.

The Committee members were so convinced that the longer-run prospects for the economy had improved, that they decided to skip reference to the risks to the outlook in their official communications:

in light of the expected progress on vaccinations and the change in the outlook for fiscal policy, the medium-term prospects for the economy had improved enough that members decided that the reference in previous post-meeting statements to risks to the economic outlook over the medium term was no longer warranted.

Hence, the recent minutes are generally hawkish and bad for gold . They show that the FOMC participants turned out to be more optimistic about the U.S. economy over the medium-term, as they started to expect “strong growth in employment, driven by continued progress on vaccinations and an associated rebound of economic activity and of consumer and business confidence, as well as accommodative fiscal and monetary policy.”

And, although they acknowledged that inflation may rise somewhat in 2021, the Fed officials generally were not concerned about strong upward pressure, with “most” participants still believing that inflation risks were weighted to the downside rather to the upside. In other words, they expect more growth than inflation.

The Fed officials that have become more optimistic about the economy are proving negative for gold prices. Gold shines most when the Fed is pessimistic about GDP growth and the labor market, as these two factors are more prone to loosen the Fed’s monetary policy . In other words, gold prices need more inflation than economic growth in order to grow. Alternatively, gold needs the Fed to do something and expand its monetary accommodation. 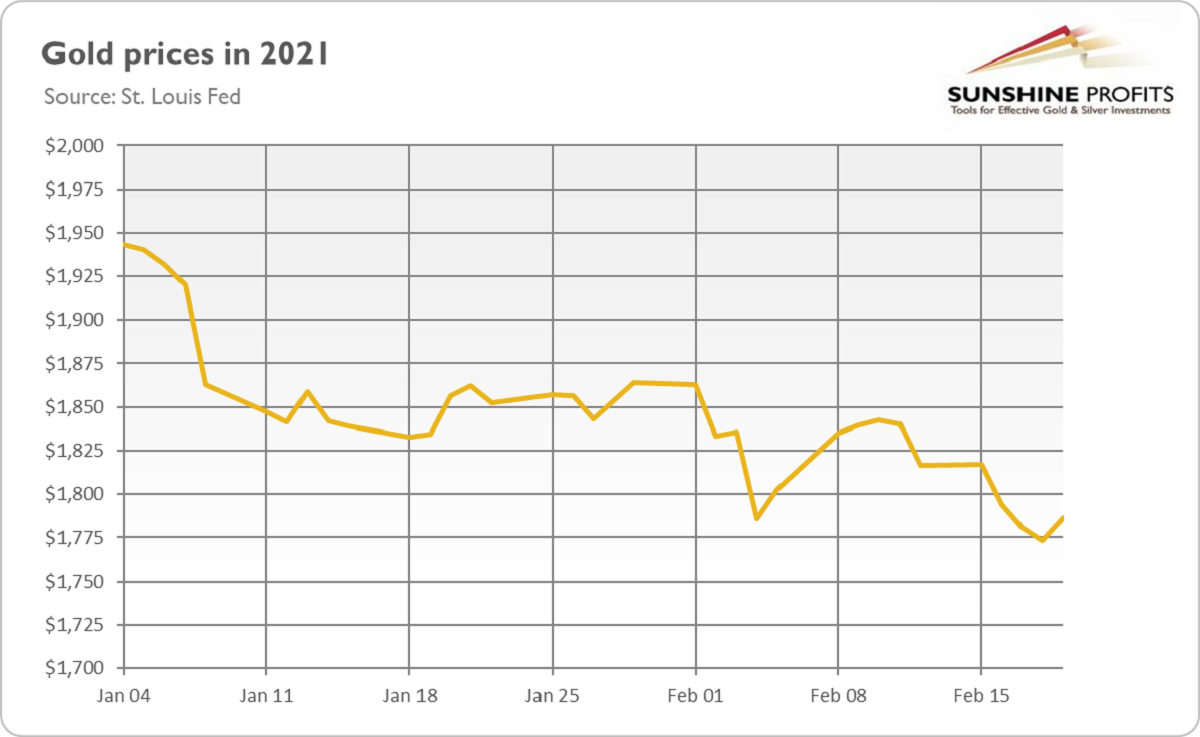 Of course, the decline in the gold prices was more related to the significant selloff in the U.S. bond market than to the FOMC minutes. The bond yields increased sharply. For instance, the 10-year TIPS yields rose from -1.06 on February 10 to -0.87 on February 18, 2021, as one can see in the chart below. 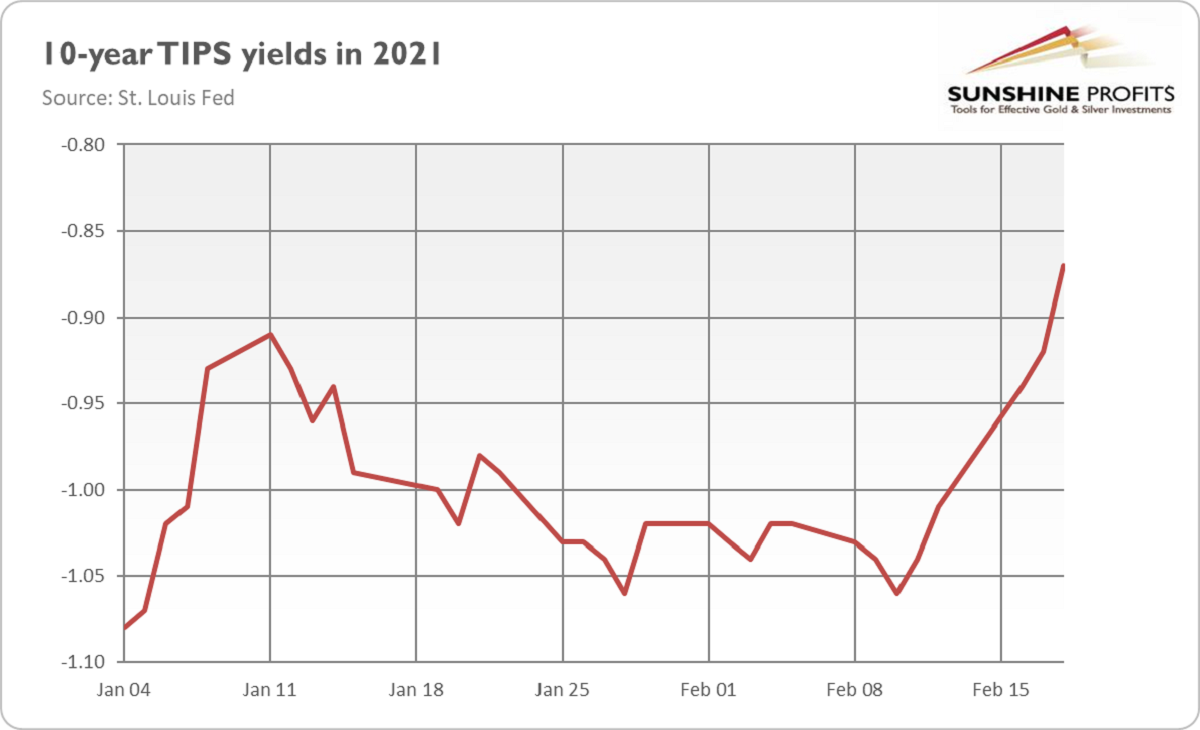 However, both events clearly show elevated expectations about the medium-term economic growth. Both investors and central bankers have become more optimistic about the future amid progress in vaccinations and greater prospects for additional fiscal stimulus. The strengthened risk appetite has supported equity prices, making some investors head for the exits in the gold market .

The Fundamentals Are Still Positive

Having said that, although gold prices still have some room to go lower – especially if real interest rates rally further – the fundamentals are still positive . I’m referring here to the fact that the U.S. economy has fallen into the debt trap . Both private and public debt is enormous. In such an environment, the interest rates cannot significantly increase, as they would pose a great risk to an overvalued equity market and Treasury. So, the Fed wouldn’t allow for really high interest rates and would intervene, either through expanding its quantitative easing program or through capping the yield curve .

Another issue is that the Fed is not going to change its dovish monetary policy anytime soon. Even in the recent, relatively upbeat minutes, Fed officials acknowledged that economic conditions were far from the central banks’ targets:

Participants observed that the economy was far from achieving the Committee’s broad-based and inclusive goal of maximum employment and that even with a brisk pace of improvement in the labor market, achieving this goal would take some time (…) Participants noted that economic conditions were currently far from the Committee’s longer-run goals and that the stance for policy would need to remain accommodative until those goals were achieved.

Moreover, the Fed’s staff assessed the financial vulnerabilities of the U.S. financial system as being notable . The asset valuation pressures are elevated, and vulnerabilities associated with business and household debt increased over the course of 2020, from levels that were already elevated before the outbreak of the pandemic . So, given all these fragilities, it is unlikely that we will see a really hawkish Fed or significantly higher interest rates. There is also a possibility of the next financial crisis, given the high debt levels. All these factors should support gold prices in the long-term, although more declines in the short-term are possible of course, due to the more positive sentiment among investors and rising bond yields.