This is a series of ongoing border disputes in Europe which tend to be lesser known by the general US public – the last article covered Hungary and Romania, this piece focuses Poland and Germany. The next article will feature Poland and Ukraine so stay tuned.

In September, Polish leaders demanded war reparations from Germany, leading some analysts (and meme creators) to suspect this move was in response to the EU’s growing pressure on Poland to meet EU migrant quotas, but the tension beneath the surface is far more profound.

Although the demands for up to $1 trillion in reparations have raised eyebrows, Jaroslaw Kaczynski, who heads the ruling, right-wing Law and Justice Party (PiS), does not find anything humorous about the request. During a speech in early November, Kaczynski pointed out that many other countries and groups of people received war reparations from Germany following the total war waged by Hitler. Kaczynski insists that the demands have less to do with finances and are more about status and honor.
Here Is What Electron Capital Told It’s Investors On A Recent Call [Exclusive]

German leaders, refusing to entertain the demands, point out that Poland gained territory from Germany following the war and rejected war reparations in 1953. European and Polish critics of PiS claim that the party is invoking latent anti-German sentiment to mobilize their base.

There is no question that Poland saw unbelievable loss and damage at the hands of Nazi Germany. Through the course of World War II, nearly 6 million Poles, including 3 million of Jewish heritage, lost their lives. That amounted to more than 15% of the population.

In 1944 nearly the entire city of Warsaw was destroyed in the suppression of a citizen uprising against the Nazis. While 200,000 civilians died at the hands of the Third Reich, the Soviets waited not far outside of the city. Long coveting control of Poland, the Soviets calculated that it was in their best interest to allow the rebellion to be quelled and the city destroyed before entering and eventually seizing control. Poles do not often forget this event that serves as a microcosm of hundreds of years of Polish history.

Although it is hard to see a full-scale WWII without Hitler coming to power, many speculate that even had he not a war with Poland would likely have been fought over territorial disputes. The conflict began over Danzig and the Corridor but the amount of land Germany "lost" to Poland after WWII was incomparably greater than that lost after WWI. Germany not only lost the Corridor and Danzig but all of Eastern Germany, everything up to the Oder-Neisse, containing over 6 million German inhabitants. Indeed, the borders of Poland changed so much over the past one hundred years it is even hard for experts to realize the extent of the changes, which were larger to the gain of the Soviet Union and the determinant of Germany after WWII. 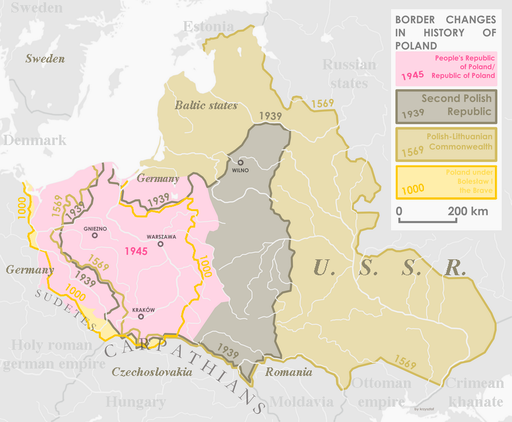 The atrocities against the Polish people cannot be summarized through statistics. Viewing the Poles as racially inferior, the Nazis embarked on a mission to exterminate Polish culture. Thousands of teachers and intellectuals were shot or died in concentration camps, while villages were burned and their occupants either killed or displaced.

Under the direction of Heinrich Himmler, western Poland was to be “depolonized” as quickly as possible. Governor Hans Frank saw to the execution of the carnage that ensued. Children were kidnapped in Germanization experiments and women were involuntarily sterilized. Catholic priests were likewise persecuted, deported, and often killed, enshrining the Catholic Church as a symbol of Polish identity and resistance. Anyone accused of Polish nationalism was also exterminated.

To replace the displaced and the dead, the German authorities imported thousands of ethnic Germans, as part of Hitler’s Generalplan Ost (Master Plan for the East). The plan called for ethnic cleansing and genocide on a grand scale of the populations of Central and Eastern Europe, to be replaced by ethnic Germans. Local communities, especially Slavs, were to be killed, enslaved, sterilized, and/or deported to Siberia.

The plan was inspired by Hitler’s romantic notions of a proud German peasant people occupying the fertile lands of Eastern Europe. These German peasants would also serve as an army defending Germany’s eastern border.

Of course, Hitler did not consider what would happen to these people if he lost the war (Nero order aside).

In the immediate aftermath of World War II, borders were redrawn, leaving many ethnic Germans behind in now hostile territory. In some cases, the Germans had recently been imported, among others, their families had lived in the region for generations. Many, whether willingly or otherwise, returned to Germany after the war, resulting in the displacement of an estimated 12 to 14 million Germans (20-25% of the German population at the time!), the vast majority coming from the (new and old Poland) Poland, followed by Czechoslovakia.

A leading expert in the field, R.M. Douglas, in his study of the post-Word War II refugee crisis, claims that 500,000 Germans perished in the forced exodus due to violence, starvation, cold, and disease. The forced relocation was often carried out using rape, violence, threats, and theft. Many Germans were even detained in the concentration camps formerly designed, maintained, and operated by fellow Germans.

Although Poland lost a great deal of territory in the east to the Soviet Union, they also gained land in the west from Germany. The Polish government took to calling these areas the “Recovered Territories,” claiming that they were a part of the old Polish nation, which included parts of Germany known as Silesia, Pomerania and the famous Prussia.

World War II and the subsequent border changes drastically changed the Polish population. During the war, the Nazis settled 1.3 million Germans in Polish territory. Following the ethnic cleansings, genocides, and forced relocations of World War II as well as the subsequent refugee crisis, today Poland is 97% ethnically Polish with only 0.2% of the population identifying as German, about one-tenth of the German people during the war. Before World War II, more than 3 million Jewish people were living in Poland. Today, with only a few thousand Poles identifying as Jewish, that number is unfortunately not even statistically relevant.

In Polish political life, the Catholic Church always has a voice.

With the post-World War II population changes, the majority of Poles today identify as Roman Catholic. Mostly because of the persecution of the Catholic Church by the Nazis and communists, as well as the resistance of Catholic figures against the communist regime, the Catholic Church has become an influential figure in Polish politics.

Although the Church generally enjoys a favorable relationship with the Law and Justice party, Polish bishops have spoken out against the demands for reparations, instead calling for forgiveness and cooperation, pointing to Germany’s charitable aid to the Polish people during the Martial Law period as well as the efforts of the first and only Polish pope, St. John Paul II, to restore peaceful relations between the two peoples.

While PiS and the Polish Catholic Church have frequently worked together, these recent comments by Church authorities could be symptomatic of growing tensions between the Church and the ruling party. Poland continues to reject "refugees," clearly at odds with Pope Francis’ "refugee" policy, drawing consistent criticism from Church leaders and serving to alienate many Poles from their Church.

A Place for History

As Poland struggles to move beyond its checkered history of oppression and partitions, one may be inclined to question what role historical narratives play in this process. While some may suggest that history forgotten is history repeated, others believe that seemingly age-old resentments belong in the past.

Poland and Germany only officially settled their borders in 1990 (or perhaps 1970),  a long time ago in the modern era, but a tiny moment in the long history of tension between the two groups.

At least as the starting demands....