ValueWalk
Home Business 2020 Was a Record Year For Dividends 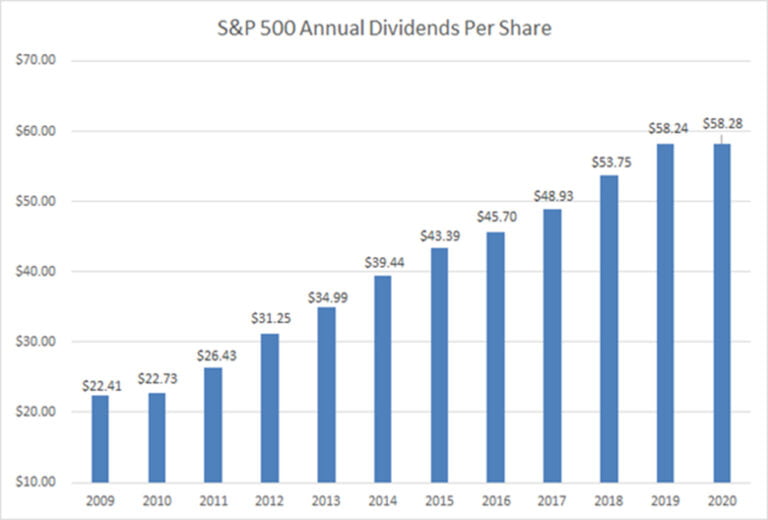 The year 2020 was definitely a turbulent one. It was marked by lockdowns worldwide due to the Covid-19 pandemic, high unemployment and economic turbulence. Yet, it also marks as another record year for US dividend payments, as measured by S&P 500. S&P 500 is a proxy for how US stocks do, since this index of 500 prominent US based companies accounts for 75% – 80% of total stock market capitalization. These are huge companies, with global operations, in 11 industries.

Dividend payments to investors in the S&P 500 rose to a new record in 2020, up 0.7% to $58.28 per share from the previous record set in 2019, according to research from S&P Global. This marked the eleventh consecutive annual dividend increase for annual dividends on the S&P 500 index. 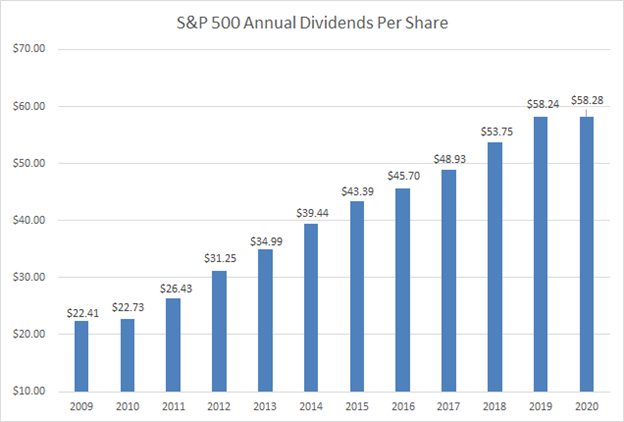 This is due to strong performance in US companies, which expect business to improve over time. The growth in dividends was due to strong first quarter and a strong fourth quarter. While the dividend cuts received a lot of publicity, at the end of the day we ended up with record dividend incomes.

This also means that the best dividend fund is probably still the S&P 500.

You can see the performance by sector broken out in the chart below:

It is fascinating to look at how the S&P Dividend Aristocrats did in 2020.

There were five companies that failed to increase dividends in 2020. If they don't raise dividends anytime by 2021, they would be kicked out of the index. The companies include:

You can view all the dividend actions year to date below: 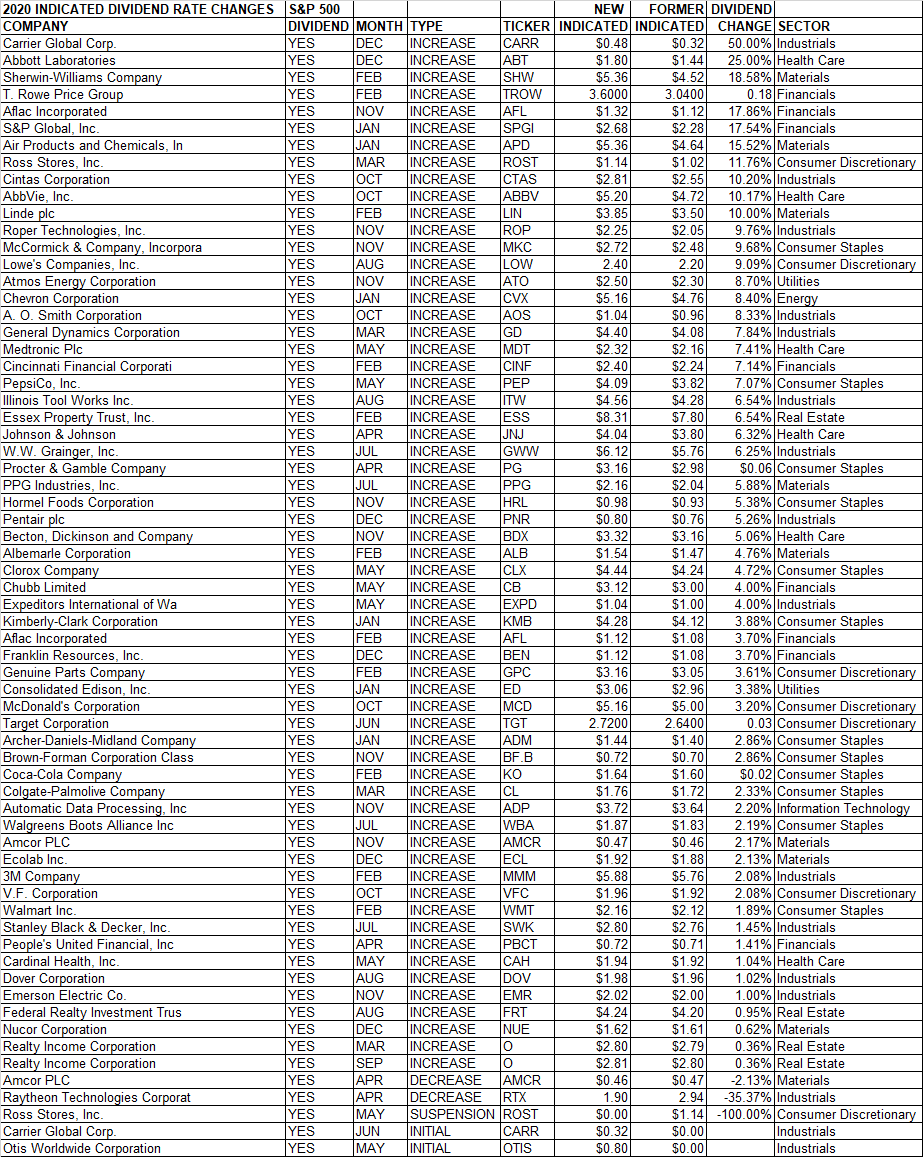 You can also view it by sector below:

As I discussed in a previous post, I disagree with the way they handled the transaction where United Technologies spun-off Carrier and Otis. That’s because, based on spin-off weights, it looks like Raytheon Technologies actually increased dividends. Based on pre-spin-offs weights, it looks like Carrier and Otis are not pulling in their weight. In other words, these two companies are paying less than what they would have paid if United Technologies had not done any breakups. Yet, the company that actually ended up raising dividends, and which actually created the long record of annual dividend increases ended up being booted off the S&P Dividend Aristocrats index. It makes no sense that the two spin-offs would be kept due to the record of the original company, but the original companies is booted off because the spin-off itself it is treated as a dividend cut. My head is spinning just thinking about it.

Overall, United Technologies shareholders received less dividends with all the spin-offs than before. Now if you want to treat the whole thing as a dividend cut, that would be logical. But do not treat the original company with the track record as a cut, but the spin-offs that just initiated dividends as dividend aristocrats.

Anyway, my issue is that the S&P committee is not treating spin-offs consistently. In 2007, Altria was kicked off the Dividend Aristocrats list after it spun-off Kraft foods. However, in 2013 they kept both Abbott and Abbvie after the original Abbott Labs split into two companies.

Addition Of Amcor To Dividend Aristocrats

I also disagree with the Dividend Aristocrats committee in adding Amcor (AMCR). It looks like Amcor acquired Bemis in 2019. Bemis had a 36 year track record of annual dividend increases. It is unclear why the acquirer would be treated as a dividend aristocrat and inherit the dividend track record of the acquired company. Looking at Amcor's dividend history, it looks like they cut dividends in 2019, as the quarterly payment went from 12 cents/share to 11.50 cents/share.

This is Amcor's dividend history since 2019:

Either way, it is fascinating to see that strong dividend payments continued in 2020, despite the global pandemic, economic turbulence and high unemployment. It makes me wonder how much higher we would have been if Covid-19 was contained.