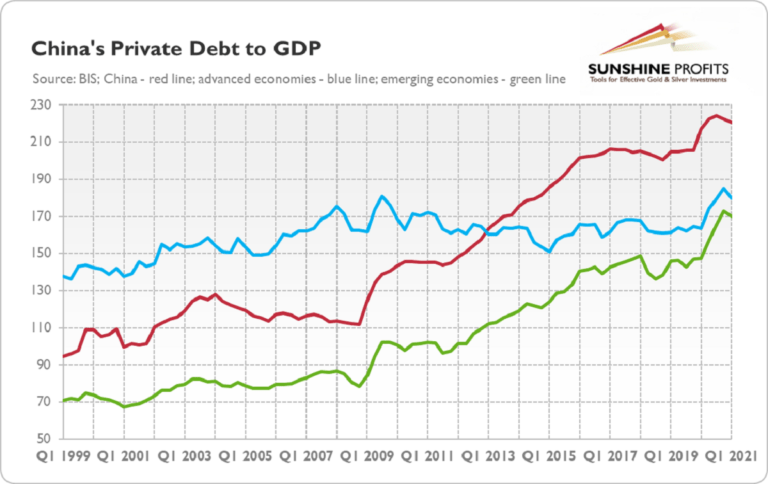 Evergrande’s debt issues are a symptom of China’s deep structural problems. If the crisis spills over wider, gold may benefit, but we are still far from such a scenario.

Evergrande Is Struggling To Meet The Interest Payments

Beijing, we have a problem! Evergrande, one of China’s largest real estate developers and biggest companies in the world, is struggling to meet the interest payments on its debts. As the company has more than $300 billion worth of liabilities, its recent liquidity problems have sparked fears in the financial markets. They also triggered a wave of questions: will Evergrande become a Chinese Lehman Brothers? Is the Chinese economy going to collapse or stagnate? Will Evergrande make gold grand?

The answer to the first question is: no, the possible default of Evergrande likely won’t cause a global contagion in the same way as Lehman Brothers did. Why? First of all, Lehman Brothers collapsed because of the run in the repo market and the following liquidity crisis. As the company was exposed to subprime assets, investors lost confidence and the bank lost its access to cheap credit. Lehman Brothers tried to sell its assets, which plunged the prices of a wide range of financial assets, putting other institutions into trouble.

Unlike Lehman Brothers, Evergrande is not an investment bank but a real estate developer. It doesn’t have so many financial assets, and it’s not a key player in the repo market. The exposure of important global financial institutions to Evergrande is much smaller. What’s more, we haven’t seen a credit freeze yet, nor an endless wave of selling across almost all asset classes, which took place during the global financial crisis of 2007-2009.

A Disappiontment For Gold Bulls

Given that the Lehman Brothers’ bankruptcy was ultimately positive for gold (although the price of the yellow metal declined initially during the phase of wide sell-offs), the fact that Evergrande probably doesn’t pose similar risks to the global economy could be disappointing for gold bulls.

However, gold bulls could warmly welcome my answer to the second question: the case of Evergrande reveals deep and structural problems of China’s economy, namely its heavy reliance on debt and the real estate sector. As the chart below shows, the debt of the private non-financial sector has increased from about 145% of GDP after the Great Recession to 220% in the first quarter of 2021. 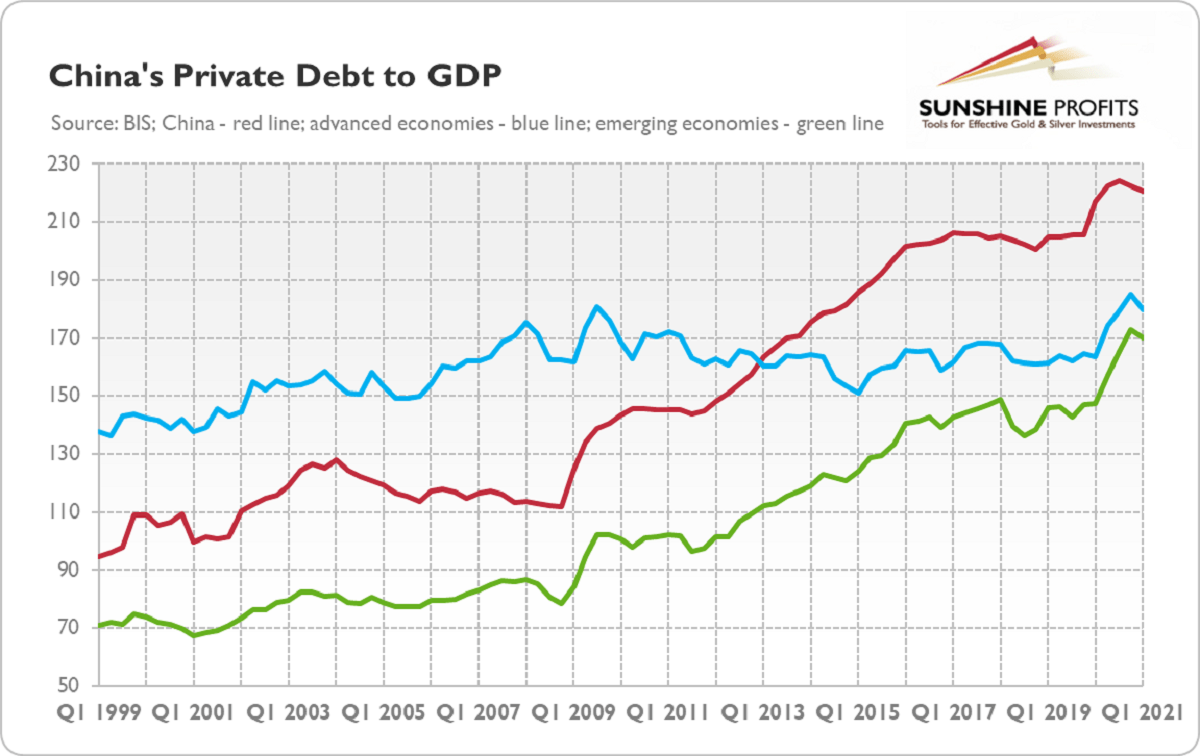 So, China has experienced a massive increase in debt since the global financial crisis, reaching levels much higher than in the case of other economies. The rise in indebtedness allowed China to continue its economic expansion, but questions arose about the quality and sustainability of that growth. As Daniel Lacalle points out,

The problem with Evergrande is that it is not an anecdote, but a symptom of a model based on leveraged growth and seeking to inflate GDP at any cost with ghost cities, unused infrastructure, and wild construction.

Indeed, the levels and rates of growth of China’s private debt are similar to the countries that have experienced spectacular financial crises, such as Japan, Thailand, or Spain. But the significance of China’s real estate sector is much higher. According to the paper by Rogoff and Yang, the real-estate sector accounts for nearly 30% of China’s GDP.

On the other hand, China has a relatively high savings rate, while debt is mostly of domestic nature. China’s financial ties to the world are not very strong, which limits the contagion risks. What is more, the Chinese government has acknowledged the problem of excessive debts in the private sector and started a few years ago making some efforts to curb it. The problems of Evergrande can be actually seen as the results of these deleveraging attempts.

Therefore, I’m not sure whether China’s economy will collapse anytime soon, but its pace of growth is likely to slow down further. The growth model based on debt and investments (mainly in real estate) has clearly reached its limit. In other words, the property boom must end.

Rogoff and Yang estimate that “a 20% fall in real estate activity could lead to a 5-10% fall in GDP”. Such growth slowdown and inevitable adjustments in China’s economy will have significant repercussions on the global economy, as – according to some research – China’s construction sector is now the most important sector for the global economy in terms of its impact on global GDP.

In particular, the prices of commodities used in the construction sector may decline and the countries that export to China may suffer. Given that China was the engine of global growth for years, it will also slow down, and, with lower production, it’s possible that inflation will be higher.

Finally, what do the problems of China’s real estate sector imply for the gold market? Well, in the short term, not so much. Gold is likely to remain under downward pressure resulting from the prospects of the Fed’s tightening cycle.

However, if Evergrande’s problems spill over, affecting China’s economy or (a bit later) even the global economy, the situation may change. Other Chinese developers (such as Fantasia or Sinic) also have problems with debt payments, as investors are not willing to finance new issues of bonds.

In such a scenario, the demand for gold as a safe-haven asset might increase, although investors have to remember that the initial rush could be into cash (the US dollar) rather than gold. Unless China’s problems pose a serious threat to the American economy, the appreciation of the greenback will likely counterweigh the gains from safe-haven inflows into gold. So far, financial markets have remained relatively undisturbed by the Evergrande case. Nevertheless, I will closely monitor any upcoming developments in China’s economy and their possible effects on the gold market.