While neobanks initially emerged in response to the barriers presented by traditional banks, they have become viable businesses in their own right by offering products, services, and a level of convenience that traditional banks have been slow to adopt.

To understand the benefits of neobanks and why they’re having their moment, we must first look at how traditional banks operate. Many of them are more than a century old -- a fact that is evidenced by their continued reliance on legacy technology and antiquated processes. These outdated methods of operation make for a complicated and oftentimes frustrating experience for the customer.

Though most traditional banks have worked to add new features and services, overall they have been slow to respond to evolving customer preferences. Take mobile apps for example. Most major banks today offer a mobile app that enables customers to conduct some of their banking via their phones. But these platforms often act and feel like digital extensions of their monolithic physical branches, clumsily ported onto your phone, and unable to harness the immense power that smartphones and internet-connectivity offers.

As frustrating as it is, this lack of innovation on the part of traditional banks makes sense if you consider their history. For decades, the biggest banks in the world functioned within the structure of an oligopoly and it wasn’t until fairly recently that they ever needed to worry about new kinds of competition.

While this lack of innovation has reduced the appeal of big banks among customers and has created space for the emergence of neobanks, it is not the only contributing factor to this shift in customer perspective. Unethical behavior by banks has come to the forefront in the past decade as many of the world’s biggest traditional banks have embroiled themselves in scandals and the details of those scandals have been broadcast to the public.

To name just a few, Deutsche Bank has been linked to money laundering, Wells Fargo paid a $185 million fine for creating millions of accounts on behalf of customers without their knowledge, and the financial crisis of 2007-2008 reads like a murderer’s row of the biggest names in the global banking industry. Additionally, repeated regulatory attempts by world governments to rein in unethical banking practices have merely resulted in newer, more creative ways for banks to break the rules in pursuit of profits.

It’s safe to say that this shady behavior has not sat well with customers. According to a survey by The World Economic Forum, “45.3 percent of respondents said they ‘disagree’ with the statement that they trust banks to be fair and honest.” This lack of trust in banks has paved the way for neobanks to enter the finance space, opening customers’ minds to consider alternative banking options.

Now consider some of the advantages that neobanks such as PayPal, Square, Alipay, Monzo, Wealthfront, Robinhood and Simple offer.

It starts with greater convenience. By offering a way for customers to bank from the palm of their hand, neobanks are able to avoid incurring the real estate and operational costs associated with maintaining and operating physical branches. These cost savings can then be passed along to customers in the form of lower interest rates on loans.

Beyond offering lower rates, neobanks also focus on making loans more accessible. They bring with them far less bureaucracy than traditional banks offer, enabling customers to get faster loan approval. This has also been the narrow focus for my company SALT, where digital asset-backed lending has enabled us to provide our customers with access to cash and offer competitive interest rates without having to take their credit scores into account.

Unlike traditional banks, neobanks have boomed in the time of smartphones, building their platforms with a mobile-first approach. This completely digital environment produces a user-friendly interface, driven by cutting-edge APIs.

Neobanks’ systems tend to be both highly automated and scalable. They offer open infrastructures with the idea that other creative applications can be built on top of their basic banking platform to improve their offerings. This also means they can adapt quite rapidly to a fast-changing industry. It’s far more likely to see one of these newcomers start to offer cryptoasset services before any traditional institution.

While big banks seek to own as many pieces of a customer’s financial existence as possible, neobanks understand that choice is the future of finance. By offering customers the opportunity to choose from an array of creative banking solutions, neobanks are completely disrupting the banking  industry. While some companies are offering microlending, others are offering commission-free stock trading, undercutting the costs of even the lowest-price discount brokers.

Combine these offerings with FDIC-insured savings accounts, checking accounts with debit cards, ATM access, credit cards, and mobile-first features such as mobile check deposits, and customers have nearly every banking service they need in one place. 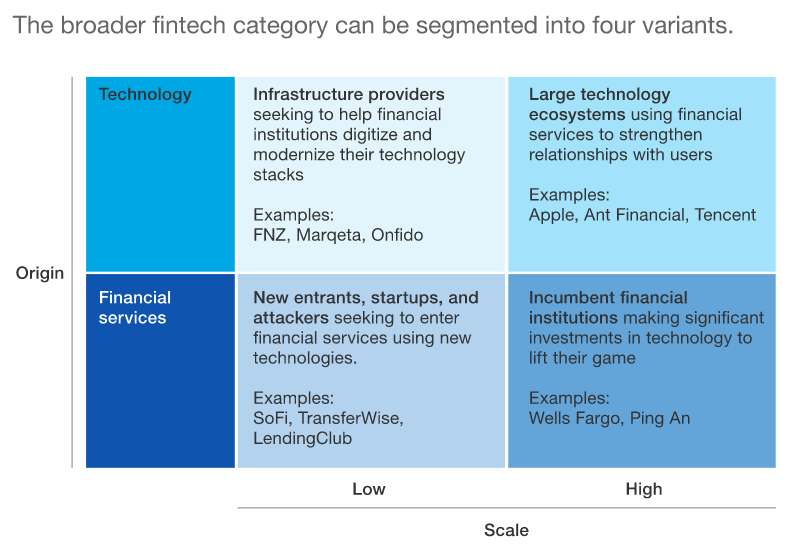 Even with all of these advances, neobanks still constitute a small percentage of the overall banking and financial services space, leaving plenty of room for significant growth. How that growth manifests itself remains an open question.

That question is this: Will fintech companies overtake traditional banks, or just add competition?

The answer will likely depend largely on how quickly and extensively traditional banks evolve. Historically, they’ve been slow to change, and haven’t paid the price for that intransigence. That’s because over the years, most banking customers have been fairly inert, accepting higher interest rates on loans, recursively punitive overdraft fees, and monthly account maintenance fees because they haven’t found better alternatives that they can trust.

The current COVID-19 pandemic could force change, both among banking service consumers and the industry itself. Visits to physical bank branches were already an inconvenience to customers before the outbreak of COVID-19. Now that banks are inevitably having to focus on their digital service offerings, even traditional banking customers will get to experience fully digital banking. How well their bank performs in this aspect will determine whether a customer remains loyal to their bank following the crisis, or chooses to make the switch to a neobank that can better meet their needs.

As more customers seek better banking alternatives, the younger generation will be able to teach traditional banking customers about the benefits of neobanks. From there, it won’t take much due diligence before more people realize that neobanks offer smoother platforms, better interest rates, and more flexibility than traditional banks.

If that happens and traditional banks’ market share starts to erode at a faster pace, traditional banks will be faced with the classic build-or-buy dilemma. Will they hire the best, more forward-thinking engineers to catch up to neobanks’ superior technology and user interfaces? Will they seek to acquire leading fintech companies as a way to protect themselves? Or will they remain complacent, and let fintech upstarts pass them by?

Stock-trading app Robinhood suffered multiple shutdowns as financial markets crashed in early March. Chime, a leading branchless U.S. bank, has experienced multiple outages over the past year, with the company’s five million users unable to see their balances and intermittently unable to use their debit cards. Above all other banking features, customers want to know that they can access their money when necessary, so these kinds of setbacks must subside if fintech contenders want to make serious headway.

Meanwhile, regulatory complexity within countries and across regions is contributing to “winner take most” outcomes for fintech disruptors. Neobanks need to invest more in regional compliance to gain traction, rather than trying to launch globally on day one.

The landscape is changing rapidly for neobanks, and it will keep changing. Venture capital-backed startups will try to grab a big piece of the consumer banking world, but they’ll face plenty of competition. We might also see fintech firms partner and bundle services in an effort to compete head-on with the big banks.

Ultimately, the future of banking could simply come down to consumer awareness. Take my brother-in-law for example. After recently receiving  a check from his grandfather, he sent it home to his parents so they could deposit it into his bank account. Although he’s highly educated and technologically savvy, he had no idea that he could deposit the check in a matter of seconds with a mobile banking app. Instances like this demonstrate that there’s still ways to go in terms of shifting consumers’ mindsets to challenge traditional banking.

It’s something that people don’t really think about, unless they work in the industry, or need to get a mortgage or some other major service from their bank.

Just as disruption has changed consumer habits in so many other industries, it will eventually do so in banking.  Neobanks are better positioned to integrate with top data transfer network providers like Plaid, as they think about service through a lens that is different from that of traditional banks. As consumers become more aware of alternative banking options, they will catch on to the advantages of neobanks and inevitably make the switch, choosing to abandon their traditional bank in the process.

For the banking industry, change is already here. And more change is coming.

Rob Odell is Co-President & Chief Product Officer at SALT where he is responsible for developing the strategic direction of the company and managing the product and marketing teams. Rob has been a Bitcoin believer since 2013 after being introduced to it by a Bali-based coffee roaster selling his beans for Bitcoin. SALT allows borrowers to use their cryptoassets as collateral to secure cash or stablecoin loans.