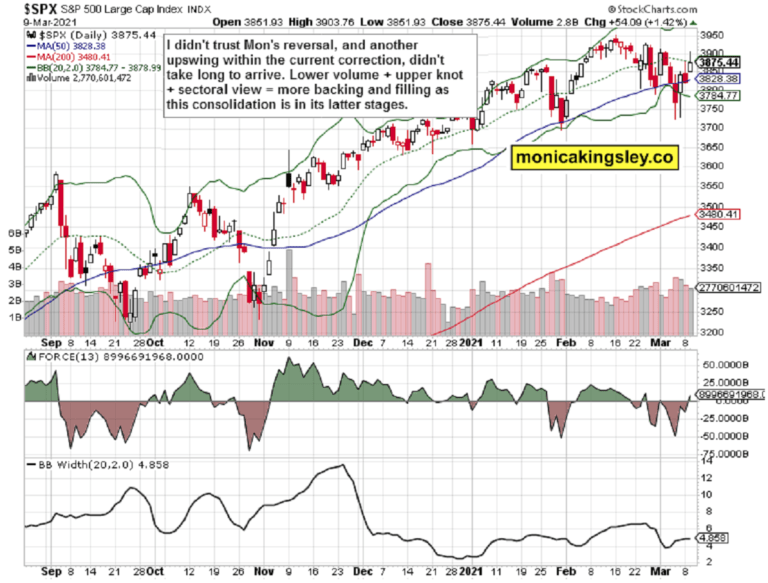 Monday‘s reversal I didn‘t trust, gave way to another upswing – still within this getting long in the tooth correction. It‘s not over, and corporate bonds aren‘t yet confirming – it has lately become a reasonable expectation that when the higher quality debt instruments (think LQD, TLT) have a good day, junk corporate bonds get under pressure, but seeing their (HYG) performance more aligned with the S&P 500 is what I am looking for in a rally on solid footing.

Tech Performance Vs The Rest Of The Market

st compare the tech performance to the rest of the market, especially when viewed from the decling new highs new lows (yes, these closed higher on Monday). It‘s apparent that yesterday‘s S&P 500 upswing was the result of reallocation to tech to the detriment (mild, but still) of much of the rest, in light of the key development of the day – falling Treasury yields.

The stock market simply keeps dealing with the rising nominal rates, which would be easier when these move less fast and steeply than till now. Consolidation of their recent move appears underway, in fits and starts, as long-term Treasuries are:

(…) trading historically very extended compared to their 50-day moving averages. While they can snap back over the next 1-2 weeks, the 10y Treasury bond yield again breaking 1.50% is a testament to the Fed not willing to do anything at the moment.

The Move In Gold Not Showing In CPI

On one hand, the central bank is fine with commodities on the move, which aren‘t yet really showing in CPI, (today‘s 0.4% reading is a baby step in this direction) and which the Fed claims would be only transitory. On the other hand, the bond market is buying into this assertion to a degree, because otherwise the long-term bonds decline would continue rather unabated. As we are in the reflationary stage when economic growth is rising faster than both inflation and inflation expectations, this laissez faire approach to inflation isn‘t likely to bite the Fed now as much as to truly wake up the bond vigilantes.

It‘s that the „high rates“ we‘re experiencing currently, do not compare to the early 1980s, which underscores the fragility of the current monetary order. The Fed knows that, and it has been evident in the long preparatory period and baby steps in the prior rate raising and balance sheet shrinking cycle.

The market will see through this, and the central bank would be forced to move to bring long-term rates down through yield curve control or a twist program, which would break the dollar, drive emerging markets, and not exactly control inflation – real rates would drop like a stone in such a scenario, turning around gold profoundly.

But we‘re not yet there, as inflation is still too low and economic growth too high to force this scenario to play out. Market players are though already hedging against the rising (commodity prices thus far chiefly) inflation – and gold is still mostly on the defensive even as TIPS are starting to turn. What we‘re seeing in the miners to gold ratio, are green shoots in obvious need of follow through to turn the yellow metal sustainably around.

Bottom line, if I had to pick only two markets to watch right now, it would be long-term Treasuries and the dollar. 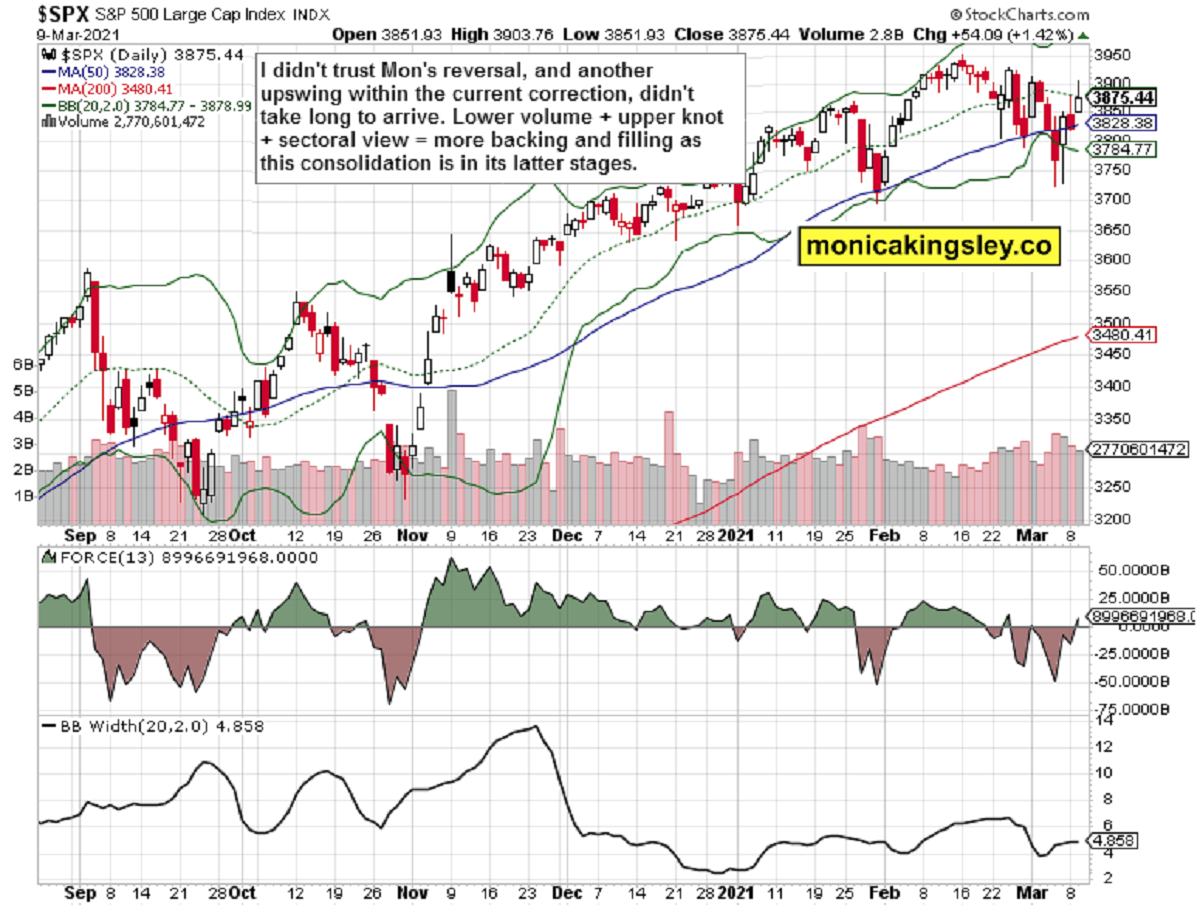 Daily rebound with a long upper knot, indicating consolidation ahead just as much as the low credibility Monday reversal. Force index is turning positive, but I am not looking at it to absolutely spike just yet. Overall though, the balance of forces is slowly but surely shifting towards the buyers, which would become more evident once we clear the key 3,900+ zone – perhaps even later today. 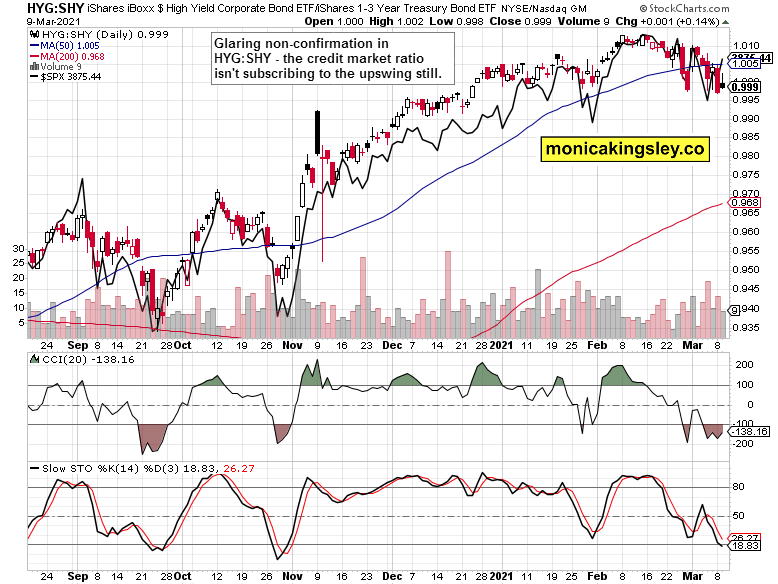 High yield corporate bonds to short-dated Treasuries (HYG:SHY) ratio is the key non-confirmation, which can be partially explained by the bond market strains and reallocations into the long end of the curve instruments. Stocks are as a result relatively extended, yet without accompanying warning signs in the put/call ratio or the VIX. So far so good.

What a difference a day (of higher TLT prices makes)! Technology, which has been trading almost like utilities (lower black line) lately (yeah, reopening), rebounded ($NYFANG likewise strongly), and the value stocks endured a modest daily setback. Part and parcel of the microrotations as the stock market is getting used to higher nominal rates within the stock bull run as evidenced by the rebounding bullish percent index. Yes, this S&P 500 correction is in its latter innings. 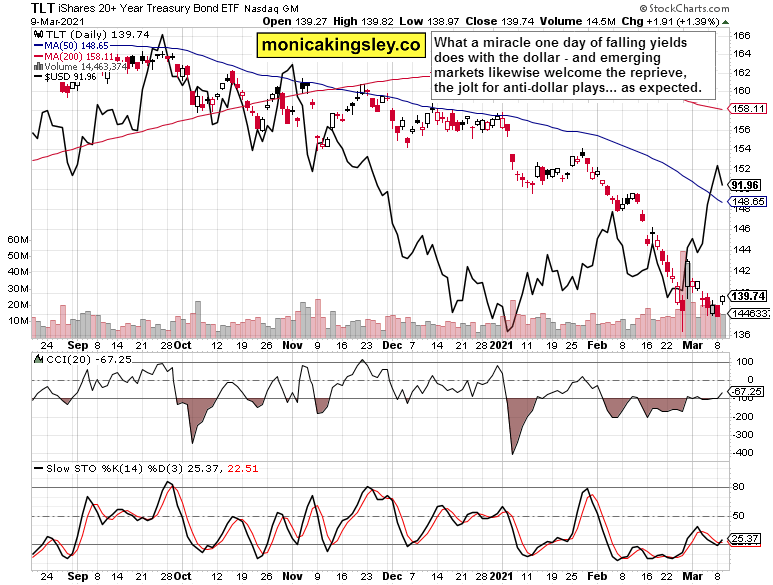 Nominal, long-term Treasury rates retreated on the day, and so did the dollar. Emerging markets liked that more than their bonds, which means that the current reprieve in yields is more likely temporary than not.

Gold in the Spotlight 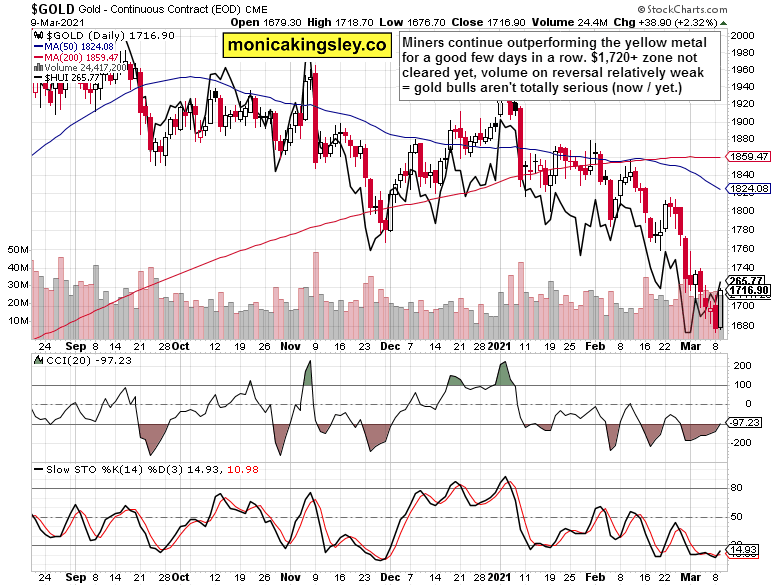 Miners‘ outperformance of the yellow metal goes on, today illustrated with the stronger $HUI. Given the CPI readings just in, the gold bulls have a good reason to run with the assumption that even Fed‘s own real inflation underestimating models, are starting to reveal its slow appearance in the basket of consumer prices. 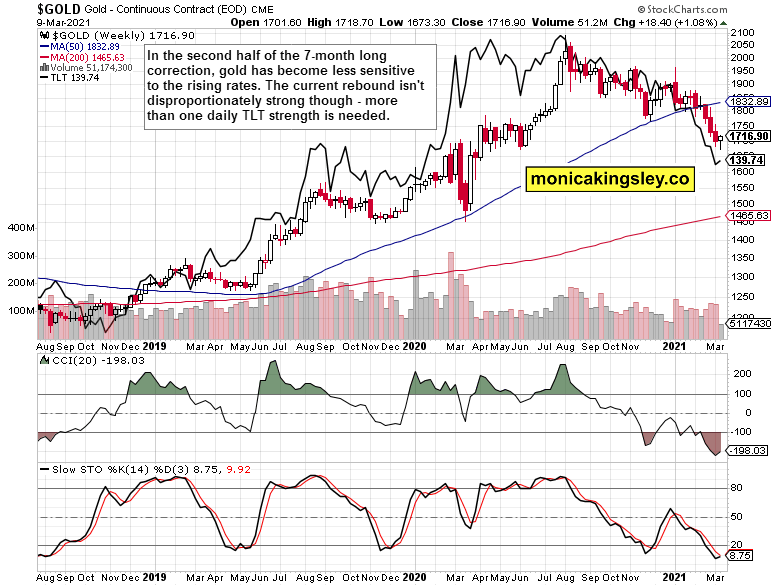 It was on Monday when I showed you this chart first, and we‘re within a gold rebound highlighting some relative strength in the yellow metal vis-a-vis the rising rates – in the latter half of the 7-month long correction. The key narrative shift would be one of focus on inflation, inflation expectations, which would be also manifest in the Treasury inflation-protected securities (TIPS) chart. Thus far, the presented big picture view is a reason for modest, guarded optimism (in need of constant monitoring).

Silver and Its Miners

Silver has turned higher yesterday, and so did platinum – it‘s however the silver miners (SIL ETF), which is making the upswing a little suspect, as in need to prove itself stronger.

Stocks are likely to take yesterday‘s setback in their stride, and this long, drawn out correction increasingly appears to be approaching its inevitable end. The medium-term factors favor the bulls, and new highs are a question of broad based advance across the sectors, adjusted for the reopening trades favoring high beta stocks.

The belated and thus far rather meek gold rebound can proceed, and should the mining stocks keep their outperformance (ideally accompanied by silver miners doing the same with respect to the white metal), that would be a hallmark of the unfolding rebound carrying on. For now, guarded optimism is still the name of the game in the precious metals arena.