There are some fantastic national monuments around the world, as a symbol of national pride, comradery and in many cases, they bring in vast numbers of tourists who come in gaze in awe at them. Well, it seems as though the folks at 1st Move international recently went ahead and did just that, but, being in the shipping industry the first thing that came to their mind was: “I wonder just how much it would cost to move this across to another country?”.

They seemingly went home and crunched the numbers to find out exactly just how much this might be, to top it off they put together some interesting visuals on how these behemoths might look in their new environments.

So, perhaps if any Government officials are reading this, and decide that a giant pyramid is just what they need to liven up their city, then now you know how much it would cost to make it happen, (turns out it’s a fair amount).

The Great Wall of China

There’s been a lot of discussion on President Trumps proposed wall on the Mexican border, with various designs, costs and concerns, but what if he could just use one that was already pre-built and has stood the test of time for hundreds of years.

Stretching for over 13 thousand miles, consisting of over 3 billion individual bricks and weighing almost 58 million tonnes, it would take a whopping $600 billion to disassemble, another $100 billion and lastly $1.8 trillion to rebuild. The total would be around $2.5 trillion, perhaps a bit over the initial budget but that’s the price you pay for quality. 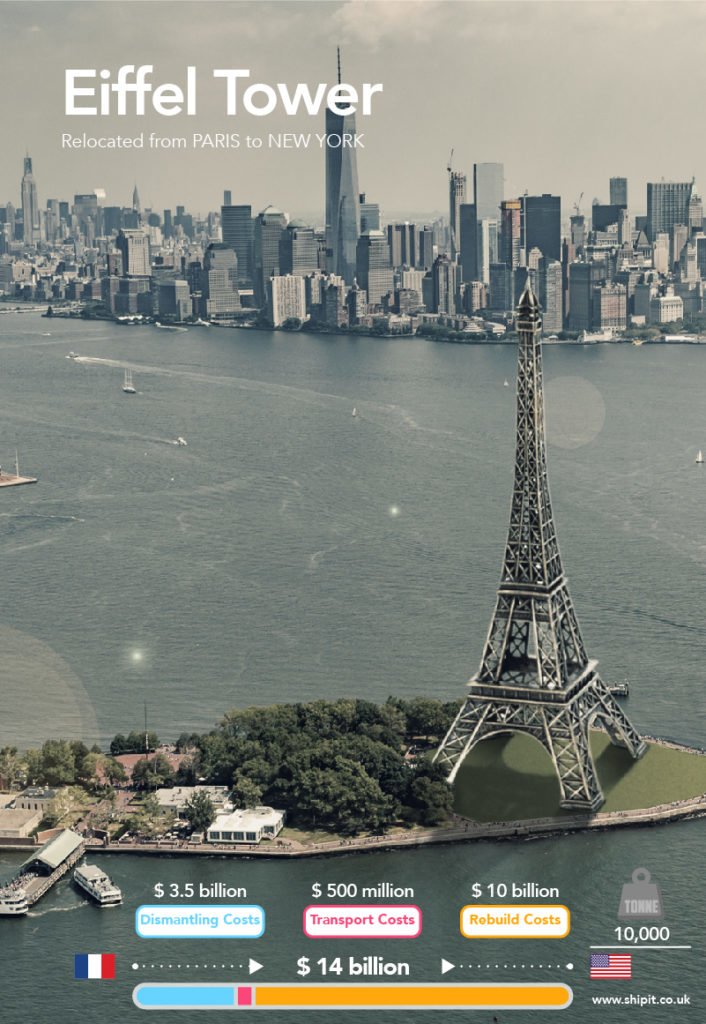 Built back in 1889, Gustave Eiffel’s perfectly crafted monument has been the shining jewel in the already impressive cityscape of Paris. In fact, so much so that the U.S.A has already made a smaller replica of in Las Vegas, but what if New York wanted to have the original piece sitting alongside the slightly taller empire state building.

With approximately 7 million visitors a year and weighing almost 10,000 Tonnes, it would cost $4.5 billion to disassemble, $500 million to transport and another $10 billion to rebuild. All in all the total price would come to $14 billion dollars. 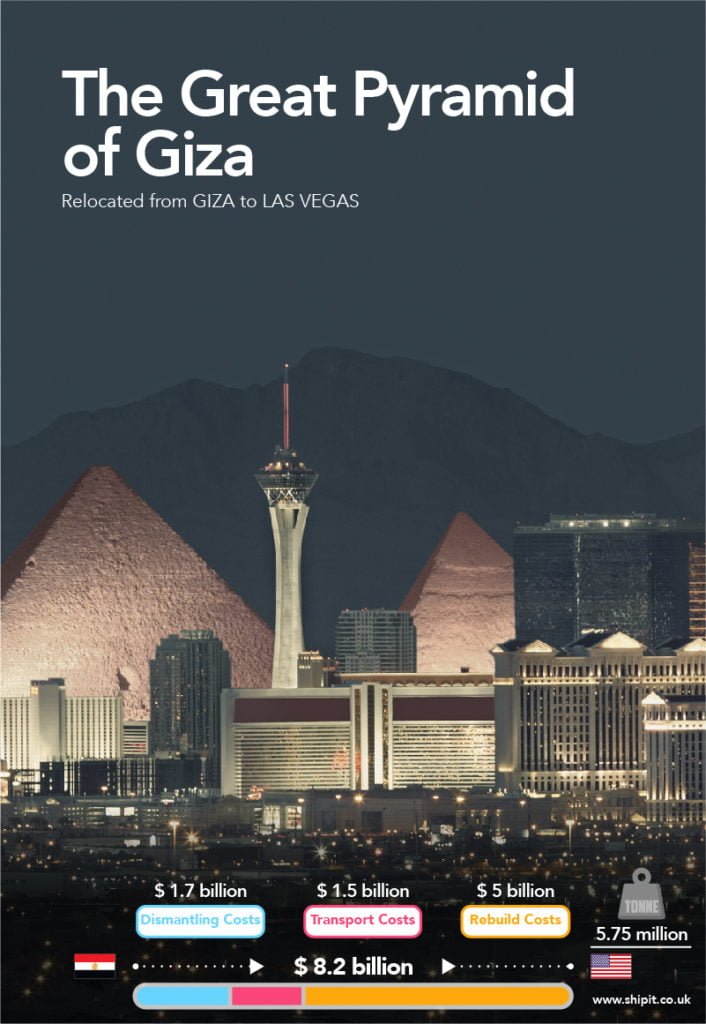 The Great Pyramid of Giza

Scientists today are still unsure of exactly how the Egyptians built the pyramids with the technology they had available, be it slave labour, waterways or maybe just aliens. What we do know, is that it might make for n impressive spot for some gambling and where better than the casino capital of Las Vegas.

Save Up to 50% on Hotels and Get Special Insider #TravelHacks

In order to move the 5.75 million tonnes of brick over to the States, it would take $1.7 billion for the disassembly, $1.5 billion to transport and a further $5 billion to reassemble, Totalling in at $8.2 billion, (or you could just put that all on red.) 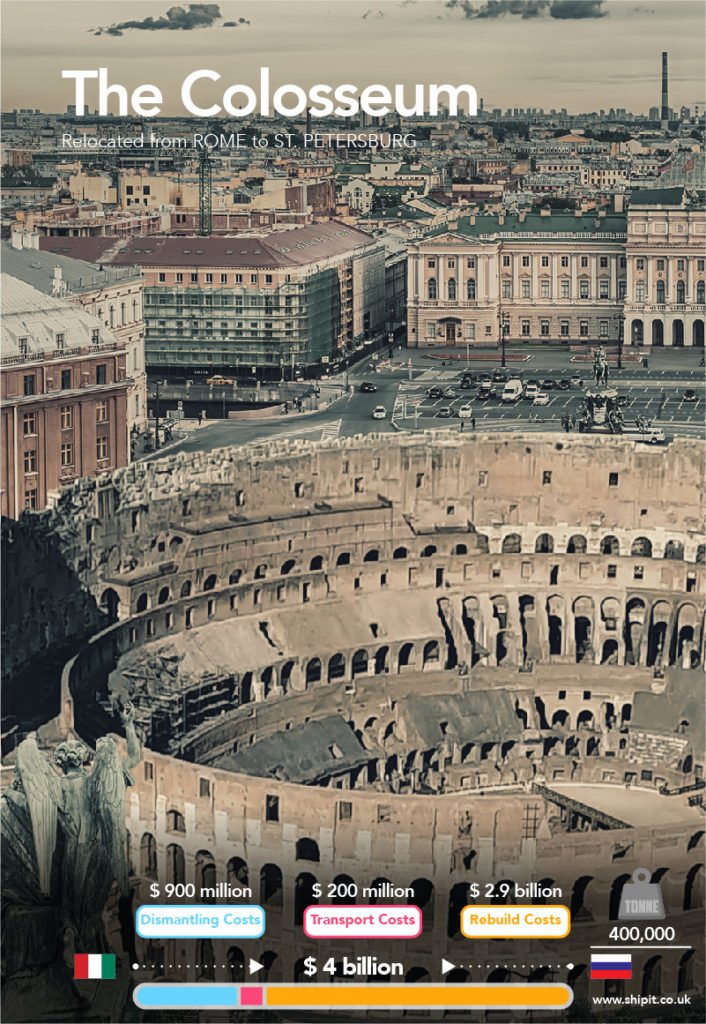 Having seen its fair share of fights over the course of its lifetime, what better way for Russia to prepare for the FIFA world cup than having its very own Coliseum, should fan’s decide they need a post-game scrap with one another.

Attracting 4 million tourists a year and weighing 400,000 tonnes, it would cost the Russian government $900 million to disassemble, $200 million to transport and a further $2.9 billion to rebuild, totalling at $4 billion, but, at least you would definitely be entertained. 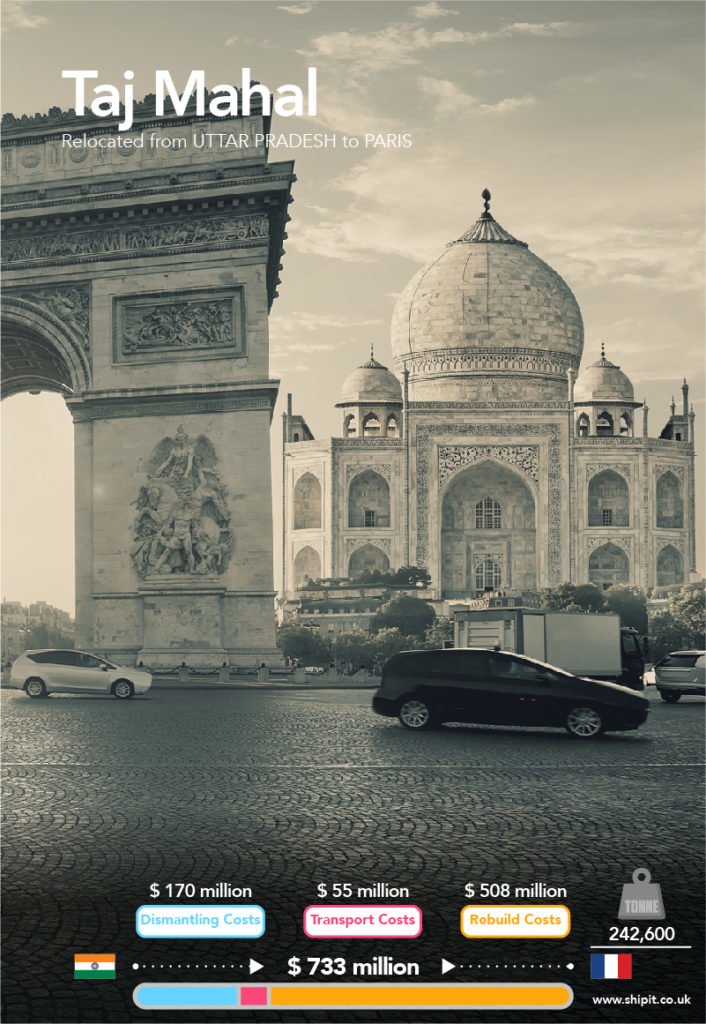 Translating to the ‘Crown of the Palace’ this monument was built as a romantic gesture by Shah Jahan as a tomb for his favourite wife. Paris has always been known as one of the most romantic cities in the world, so what better way for them to celebrate this with history’s most expensive valentines gift.

The 243,000-tonne marble structure would only cost a total of $733 million to ship over, with $170 million spent on disassembly, $55 million on transport and $509 million to rebuild it right next to the already impressive Arc de Triumph. 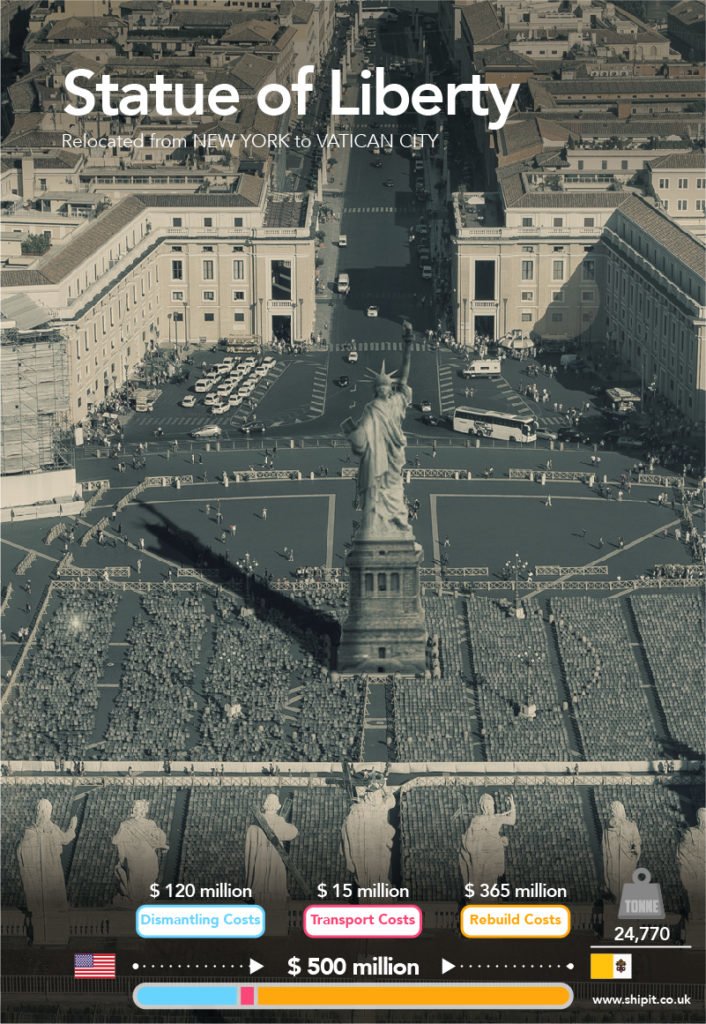 Italy has some of the most beautiful statues and stonework in the world, with the likes of David in Florence, the leaning tower in Pizza and the famously decorative Trevi Fountain in Rome, well what if they wanted to add Lady Liberty to their already impressive collection?

It took almost 9 years to build her before, but with the advancement in technology hopefully, it might be a bit quicker, unfortunately, the price wouldn’t be much different. $120 million would be spent removing her from her plinth, $15 million on shipping and $365 million to rebuild in the centre of Saint Peters square. 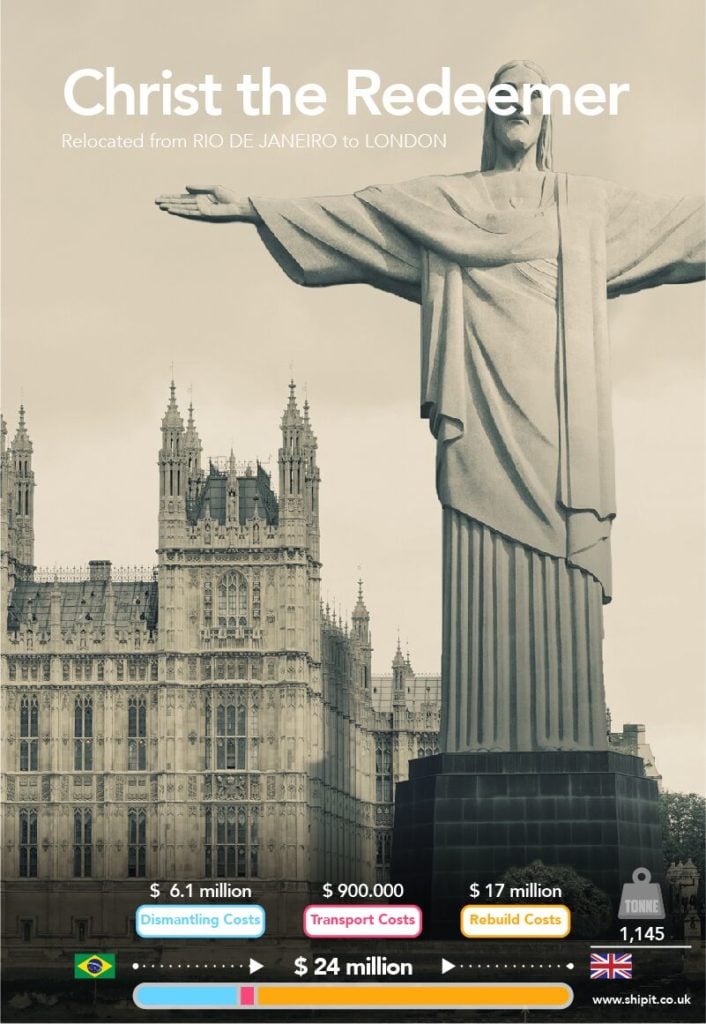 Save Up to 50% on Hotels and Get Special Insider #TravelHacks

Having looked over the vast city of Rio for the past 87 years, it might be time for a change of scenery for one of the worlds most impressive statues. Unfortunately, London doesn’t quite have a mountain like that of Corcovado for him to stand upon, but sitting next to the Thames river would have to do.

The effort to liven up the city’s skyline would cost $6.1 million in dismantling costs, $900,000 in transport costs and $17 million to rebuild, only $24 million in total!

All visuals by 1st Move international, a UK based Shipping company.