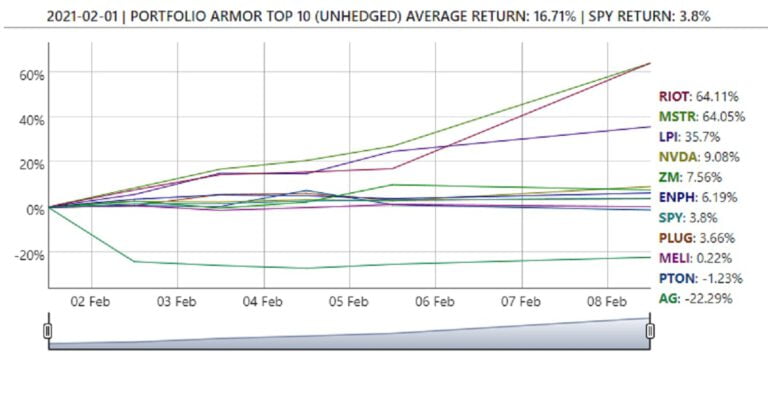 Moving On From Precious Metals

In our last post (Precious Metals: Time To Move On), we explained why our system had moved on from precious metals names. In a nutshell, their recent returns had been too weak, causing them to fail one of our preliminary screens. We illustrated this with the iShares Silver Trust (SLV), along with a couple of other precious metals ETFs.

In the case of SLV, the average 6-month return over the last 10 years has been negative, so the screen's not very forgiving.

Freeing Up Space For New Winners

Another point we made in that post was that cutting losers loose frees up space to pick more potential winners.

This screen doesn't weed out all losers, of course. After all, it didn't weed out the losers among our August 6th top names.

But it does keep you from picking names in a downtrend. And, in doing that, it frees up space to find new winners, as our system did with Nano Dimension (NNDM) a couple of months ago.

And with MicroStrategy (MSTR) a week later.

MicroStrategy was up another 29% Monday, underlining that point (Nano Dimension was up a more modest 7.65%).

Both MSTR and RIOT are involved with Bitcoin. How, exactly, we leave to fundamental analysts. If you quizzed us on what either company does, we'd fail (a quick glance at MicroStrategy's busy website offers no help). In any case, both were boosted by the spike in Bitcoin on Monday. And Bitcoin of course spiked on the news that Tesla had added it to its balance sheet.

That spike has continued as I type this early Tuesday morning, suggesting more gains for MSTR and RIOT are on tap. As of Monday's close, though, MSTR was up more than 249% since it first appeared on our top ten names on December 17th.

As a reminder, we update our top ten names each trading day, based on our system's analysis of total returns and options market sentiment for every underlying security with options traded on it in the U.S.

MSTR, RIOT, And AG: The Family Circus Of Stock Picks

There's a seen in the 1999 movie Go where one character explains why he hates the comic strip The Family Circus.

It's funnier hearing Timothy Olyphant tell it, but if you don't have time to watch the clip above, he hates it because it's the last thing he reads on the comics page, sitting on the bottom right "just waiting to suck".

That's how we felt looking at the returns so far from our top names from February 1st.

It could have been worse though. Imagine if we had had another silver name instead of RIOT? Only having one silver name freed up space for another winner.