9/11 triggered the US takeover of the global financial system

The Patriot Act strengthened the following take over tools:

Read a full transcript of the hearings.

Josh Hawley: (02:52:25): …Mr. Zuckerberg, tell me about Sentra. What is the Facebook internal tool called Sentra?

Josh Hawley: (02:52:55): Well, let me see if this refreshes your memory…Sentra is a tool that Facebook uses to track its users not just on Facebook, but across the entire internet.

…Sentra tracks different profiles that a user visits, their message recipients, their linked accounts, the pages they visit around the web…

…Mr. Zuckerberg, how many accounts in the United States have been subject to review and shut down through Sentra?

It emboldened the US government to gather information on those not under criminal investigation. The US gov’t can indefinitely detain a person suspected of being an “enemy combatant” without a chance to present proof to the contrary.

The US Department of Justice (DOJ) revealed in 2015 that in 14 years, the mass surveillance capabilities authorized by Section 215 of the Patriot Act hadn’t helped solve any major terrorism cases. Even after the FBI used Patriot Act authority from 2003 to 2006, to issue 192,499 national security letters. These allowed them to collect targets’ phone and computer records, credit and banking history, all without obtaining a warrant from a judge.

Nearly 200,000 security letters produced one terrorism conviction (the letter wasn’t even required). One letter can allow the government to acquire hundreds of Americans’ data. Which could be shared with other law enforcement agencies. Once collected, it will also never be deleted.

How the National Security Agency (NSA) uses the Patriot Act

How the Central Intelligence Agency (CIA) uses the Patriot Act 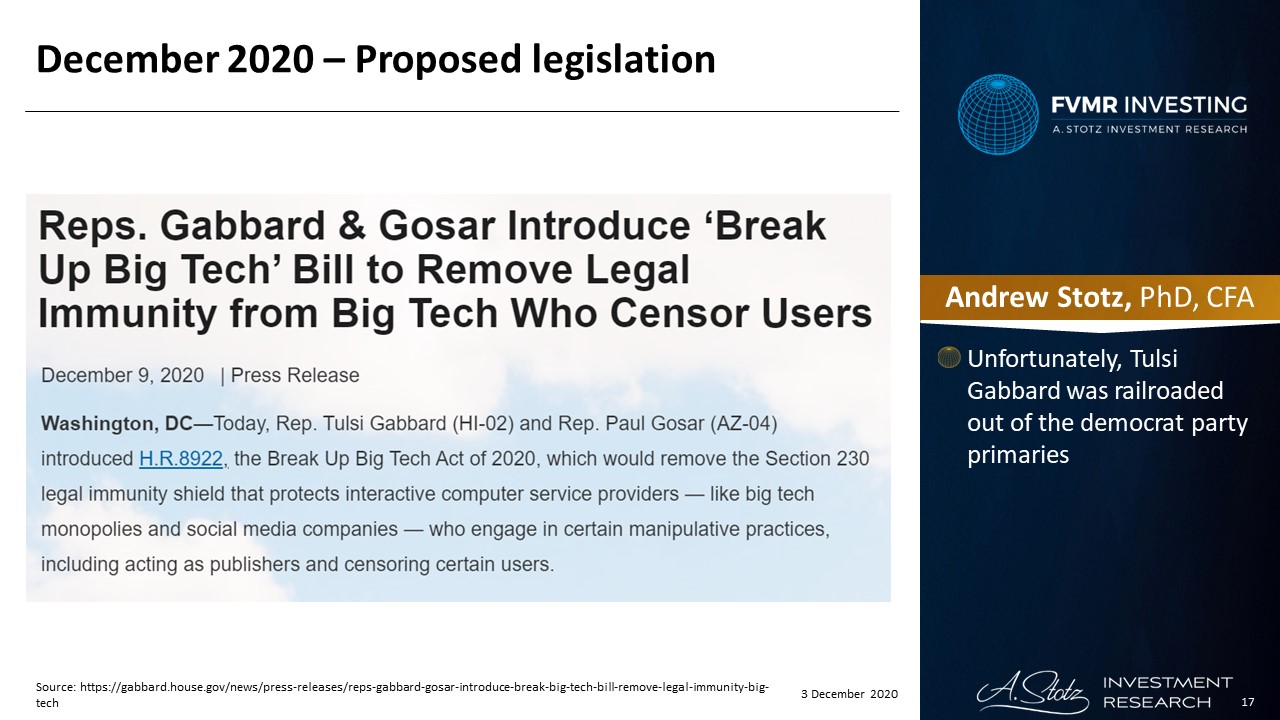 Unfortunately, Tulsi Gabbard was railroaded out of the democrat party primaries. 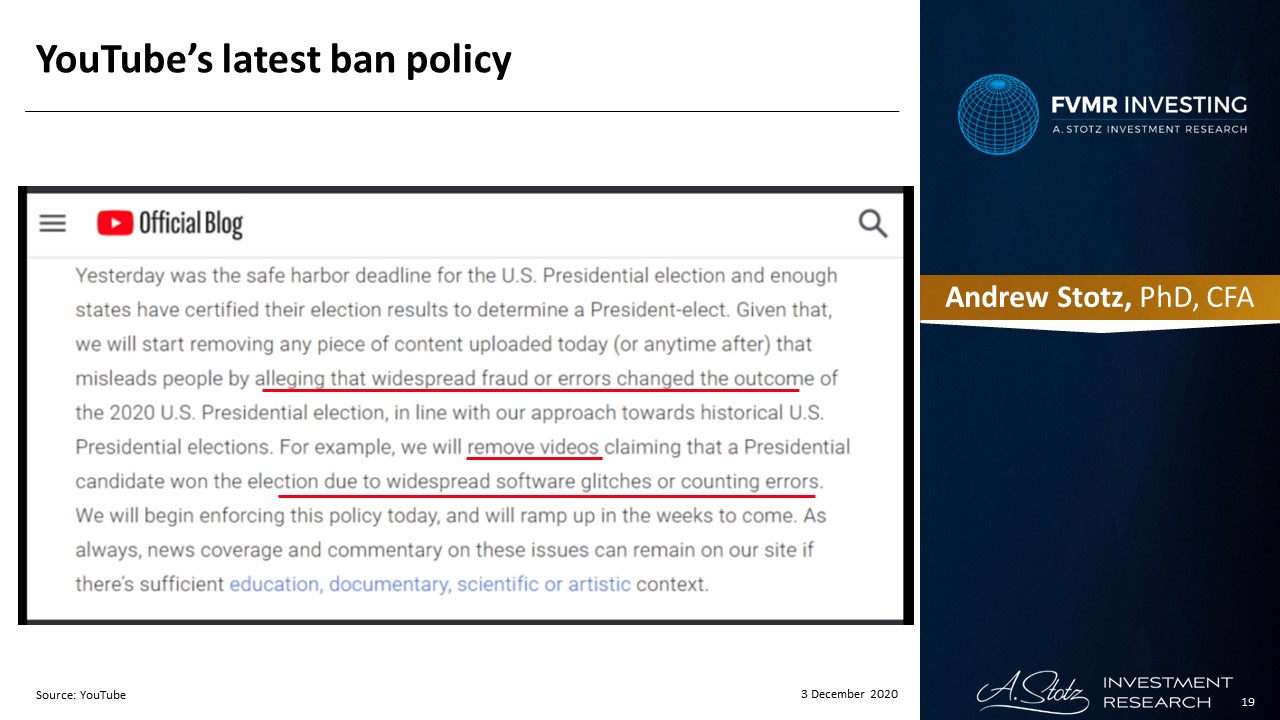 “15 million votes could be shifted without people’s knowledge and without leaving a paper trail” – Dr. Robert Epstein

The threats to Big Tech just loosened up

Trump has sent US regulators after the Tech sector claiming they are biased against conservative voices. Big Tech companies are earning massive (monopoly?) profits. There was pressure from Republicans and Trump to split up Big Tech, that pressure will subside under Biden.

US takeover of the global financial system

FATCA makes US citizenship a burden for expats

The U.S. dollar accounts for:

The U.S. gov’t wants to keep the world using dollars to maintain its power. Financial sanctions would lose effectiveness without this.

Since almost all global trade is made in US dollars, the power of the US gov’t to cut off any person or company from transacting in dollars is very powerful.

1,500+ pages of people being sanctioned

Type in “Thailand” and you get 1,126 references. Probably referring to about 300 people.

China slowly reducing reliance on US$

The world wants an alternative

The world wants an alternative and the US will resist that, with force if necessary. Eventually, this leads to a fall in the value of the US dollar. This will reduce the power of the US on the global stage so they will naturally resist.

The dollar is supported by its high demand for trade and for debt repayment. Also, in times of uncertainty, there tends to be a shift into US dollars. A stronger dollar makes US imports cheaper and US exports more expensive for global customers; this hits US manufacturing hard.

“Straight from the horse’s mouth”

The horse’s mouth = The Pentagon 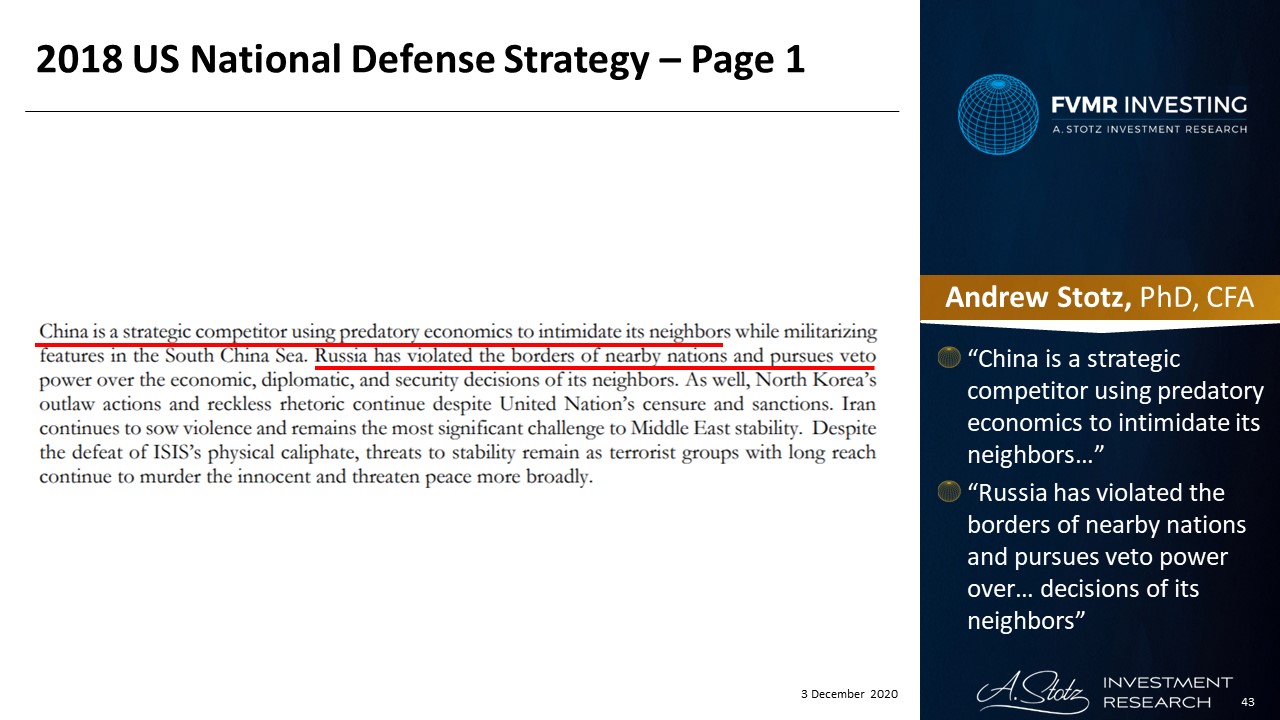 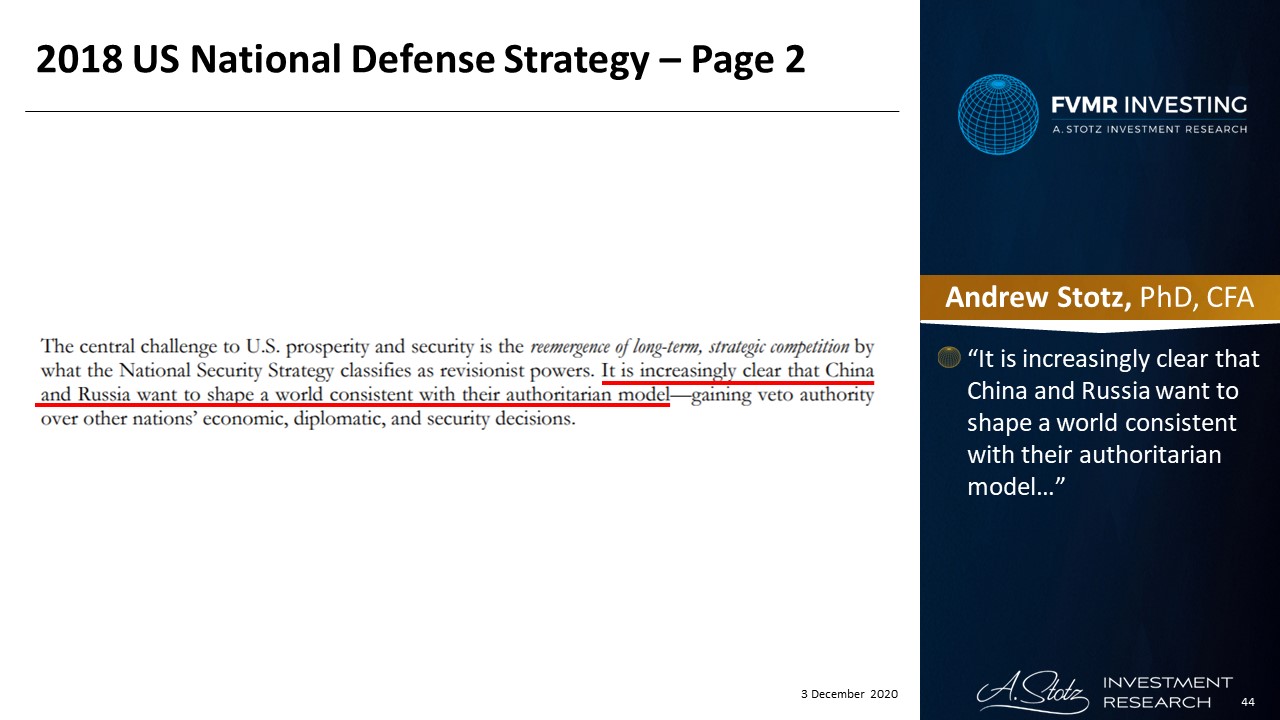 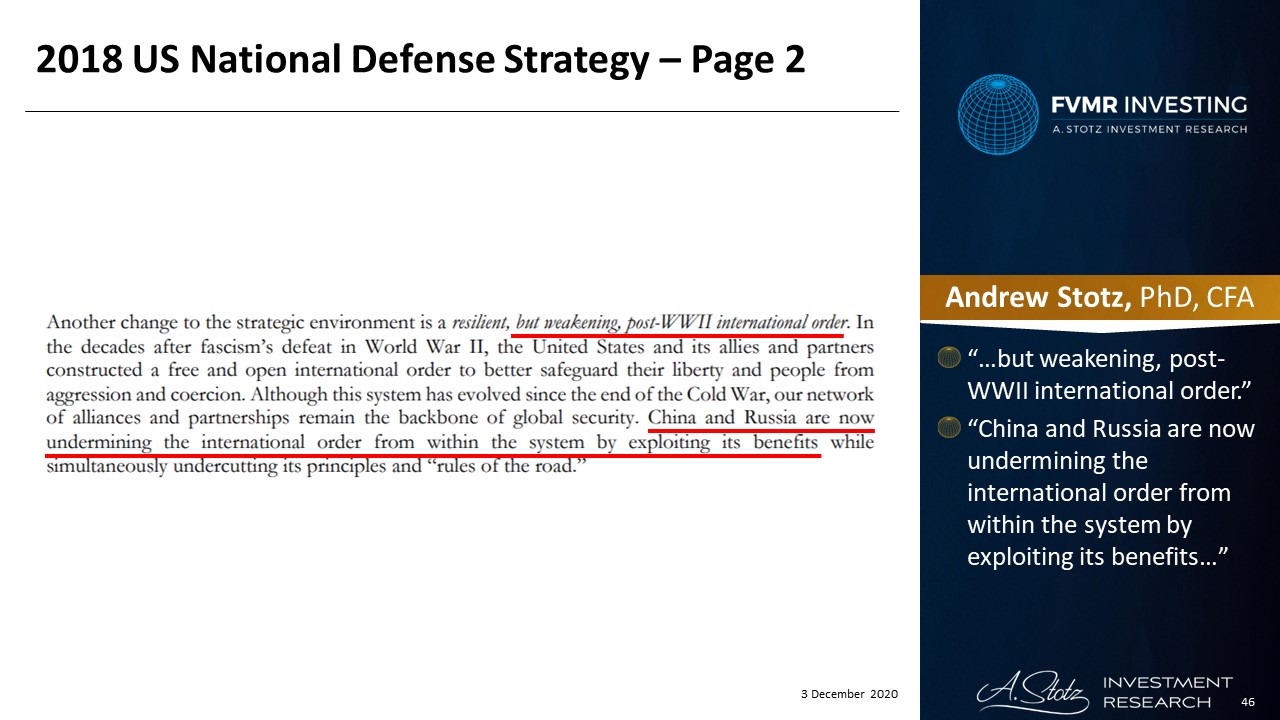 “and displacement of the United States to achieve global preeminence.” 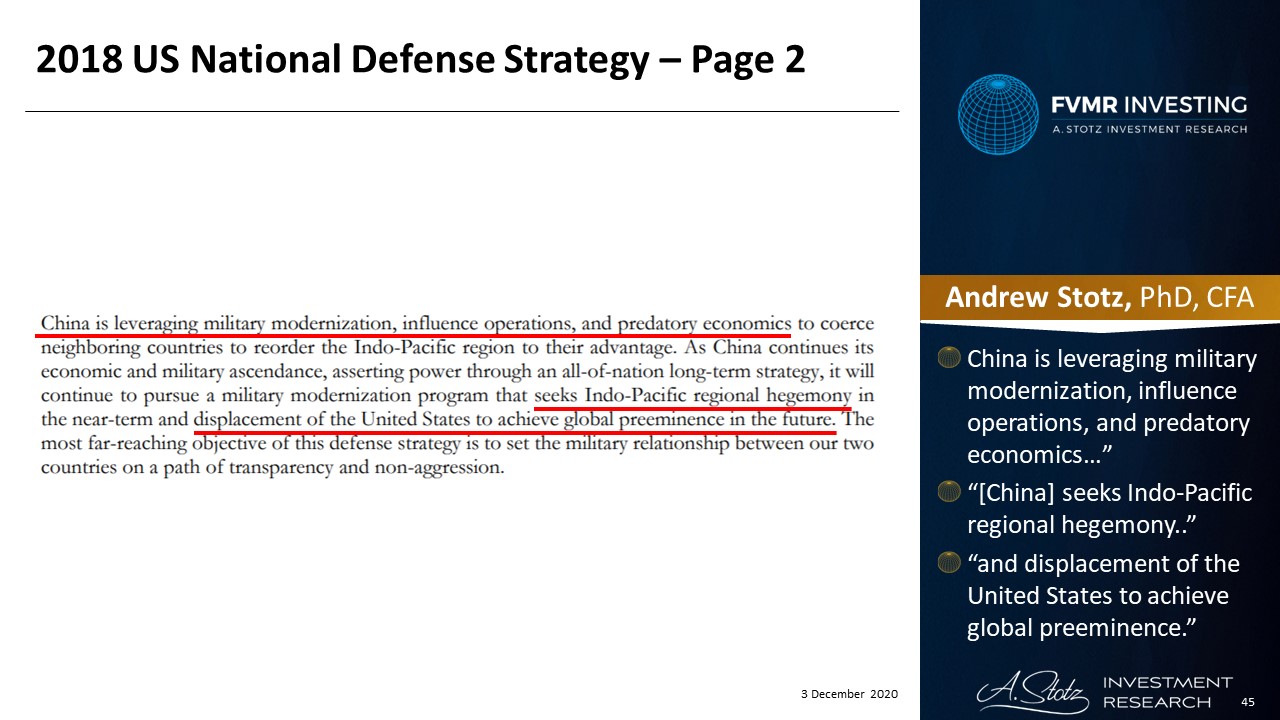 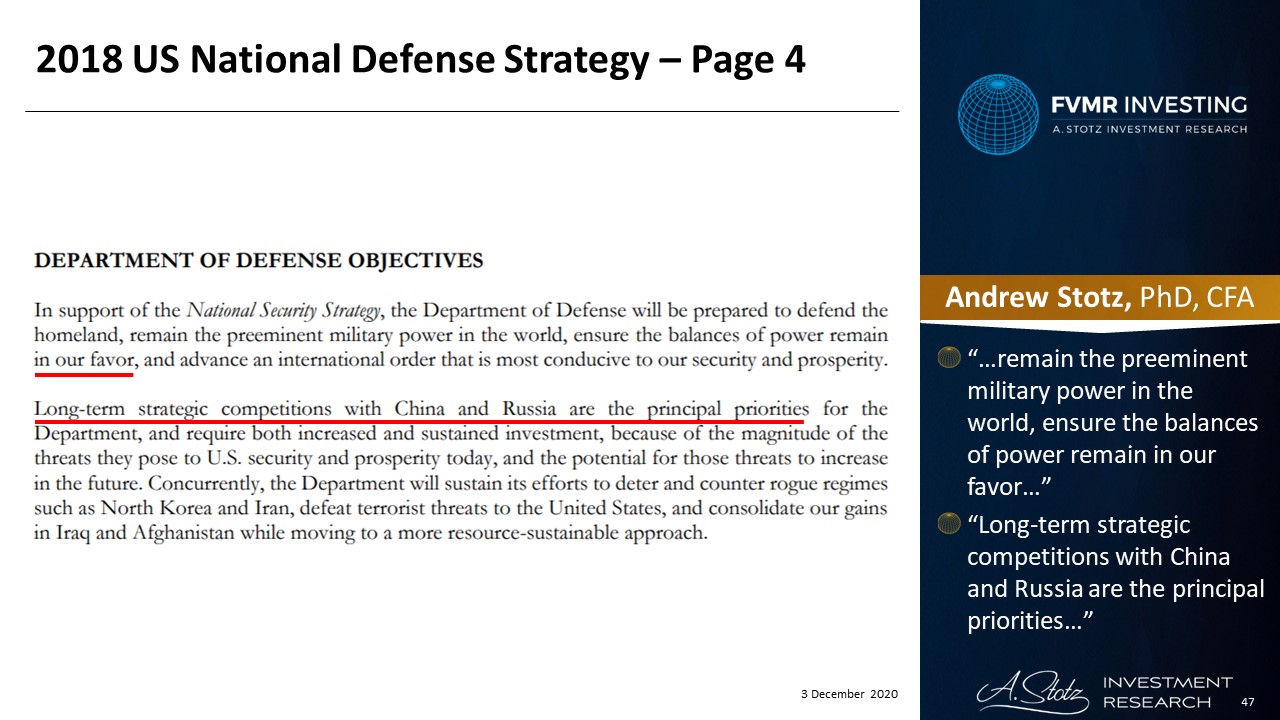 “…remain the preeminent military power in the world, ensure the balances of power remain in our favor…”

US$ beginning to decline after its bullish rally