1) My friend and former student Gabriel Grego of Quintessential Capital Management just released a short report on Cassava Sciences (SAVA). The biotech company has a $2.3 billion market cap despite no revenue based on bullish expectations for its sole drug, Simufilam, which it claims will help treat Alzheimer's disease.

Gabriel's report, which you can read here, documents the shady backgrounds of many people associated with the company and concludes that there's no chance that Simufilam will ever be approved by the Food and Drug Administration ("FDA"). Here's an excerpt:

Simufilam, Cassava's only prospective drug, appears based on allegedly forged scientific research. Phase II trials have been conducted with numerous and serious irregularities, which appear to have allowed management to deceive investors about the effectiveness of the drug.

In our opinion, Simufilam is a worthless compound, and any touted benefit is likely the result of a combination of forgery, "cherry picking" of patients, and statistical manipulation of data, of which we have plenty of disturbing evidence.

This alleged exercise in deception has taken place with the involvement of an astounding number of questionable characters: Cassava's former Senior Clinical Research Associate is a convicted felon with a record in fraud and theft. Cassava's prominent clinical research site (whose CEO is coauthor of critical research on Simufilam), IMIC Inc., is co-owned by a former escort, stripper, and crack addict with a criminal record for consumption and possession of cocaine. IMIC's Principal Investigator has been hit with a rare and ominous FDA warning letter during recent trials. Cassava's CEO and CMO have been caught making allegedly fraudulent statements about Simufilam's predecessor Remoxy, which duly failed, devastating shareholders. Cassava's recent board addition, Richard Barry, has been involved with multiple frauds.

I'm not a biotech expert (to say the least) and haven't independently verified Gabriel's work, but knowing him and his track record, I have no doubt that his report is correct – which is bad news for this high-flying stock and its huge market cap...

2) Following up on yesterday's e-mail about the white-hot economy, check out this extraordinary chart in this Wall Street Journal article: Retail Sales Rise, Showing Strong Consumer Demand, Higher Inflation. Spending on U.S. retail and food service hasn't just recovered but is nearly 15% above the trend line: 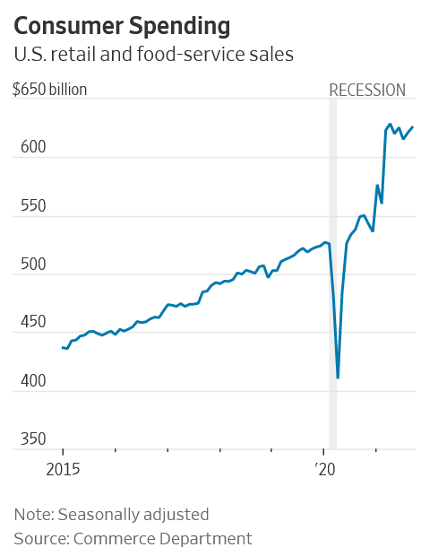 3) I'm not a China expert by any stretch of the imagination – and never will be – but I've read a bit about the country's history and try to follow current events there for two reasons: First, China fascinates me. It has a rich history and, in particular, its economic rise in recent decades, in which it's pulled over a billion people out of poverty, is simply unprecedented.

Second, as I wrote in my October 11 e-mail, two possible triggers for a stock market crash are us getting into a shooting war with China (likely over Taiwan) and a crash of China's economy.

I occasionally send articles related to China to my China e-mail list (if you wish to join it, simply send a blank e-mail to: [email protected]). Here are two recent ones...

China's economy has been taking it from all sides: power outages, the property debt fiasco, snarled shipping lanes, and, a bit further back, a brief but damaging Delta variant outbreak. Sharply weaker growth last quarter at 4.9% from a year earlier was expected. And given how modest countercyclical support has been so far, next quarter will almost certainly be worse.

What happens in 2022 remains uncertain but appears to depend primarily on three things: how fast Beijing dials back its squeeze on the property sector, whether consumers finally perk up again, and whether exporters can hang on to recent market-share gains. Power outages remain a drag, but efforts to restart shuttered coal mines and raise power prices will help significantly.

And another from the New York Times: In China, Home Buyers Who Went All In Say They Want Out. Excerpt:

The real estate boom that once attracted young professionals like Mr. He is experiencing a dramatic overhaul. At one point, buying was so frenzied that properties would sell out within minutes of being offered. Speculation sent prices soaring. Real estate grew to provide more than a quarter of the country's economic growth by some estimates, with homes becoming the main savings vehicle for Chinese families.

Nearly three-quarters of household wealth in China is now tied to property. The loss of confidence in the market could spill over to lower sales of cars and appliances, further hurting the economy. Already, weak retail sales in China have signaled that consumers are feeling increasingly insecure. As more buyers shy away from home sales, experts say Beijing's decision to intervene in the market and curb debt may risk overall growth.

Even as prominent investors question whether the collapse of Chinese property developer Evergrande could lead to China's so-called Lehman moment, referring to the investment bank that triggered the 2008 global financial crisis, Beijing has been largely silent, having vowed to no longer rescue companies once considered too big to fail. Many local officials have been left on their own to respond to the growing frustration.

When massive real estate bubbles burst, the fallout can be devastating and long-lasting – witness the U.S. in 2008 and several years afterward and Japan since 1990 (for more on the latter, see: The Lost Decade: Lessons From Japan's Real Estate Crisis).

That said, I think there's only, say, a 20% chance that China will experience a similar meltdown that could roil world markets.

I especially recommend listening to "Land of the Giants: This Changes Everything," about Apple's (AAPL) remarkable history, and the latest episode, in which they:

b) Praised Bobby Kotick, the CEO of video game maker Activision Blizzard (ATVI), which was sued by California's civil rights agency for fostering a "frat boy" culture, for his recent letter to his employees in which he asked the company's board of directors to reduce his salary to $62,500 and not award him any compensation or bonuses on top of his basic salary "until the Board has determined that we have achieved the transformational gender-related goals and other commitments."

Zoom Call On The Art Of Playing Defense

5) I was delighted to send more than 30 of my readers a free PDF of my recent book, The Art of Playing Defense, after they sent me copies of their recent COVID-19 vaccination or booster shots. I'll keep this offer open for at least another week, so please keep e-mailing me at [email protected]!

Speaking of my book, I did an 82-minutes Zoom (ZM) call with an Israeli friend and his colleagues about it recently, which he posted on YouTube here if you'd like to watch it.