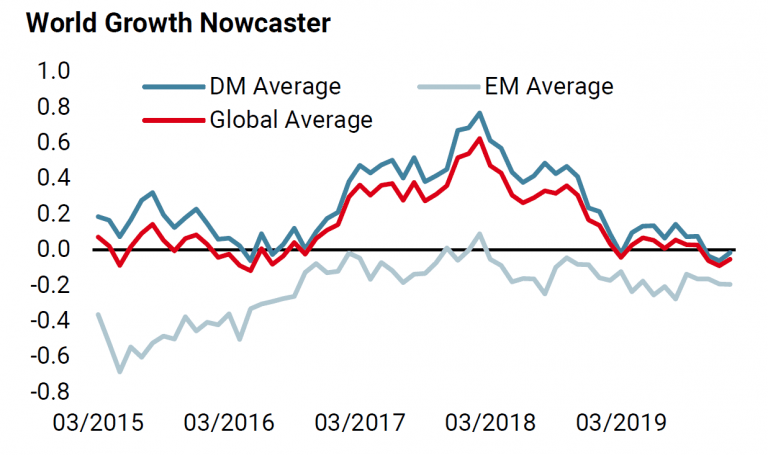 The macroeconomic situation remains positive, investor sentiment is extremely bullish and, on the back of four months of rising markets, global equity valuations are high. With the decline of the trade war and clarity on Brexit, much of the uncertainty of recent quarters has evaporated, benefiting the world economy. Central banks especially the Federal Reserve via its balance sheet have an important responsibility with regards to markets and the economy. If global investment picks up again, they may well see a way out from quantitative easing. We know the pattern, bubbles form and then correct themselves: it will therefore be key to keep an eye on central banks in the coming quarters when making investment decisions.

Twentieth-century economics students were taught that the two main roles of a central bank were to safeguard the financial system and to control inflation. The 2008 crisis and its repercussions on markets have made these lessons obsolete and, for more than a decade, the Fed and the ECB have not been keen on defending either of these objectives. In some ways, a new objective has taken precedence – limiting volatility in financial markets. This is what has traditionally been called "the Fed put", whereby the Fed implies to investors that it will have their backs if markets go down, reassuring by its tone and its actions.

This attitude has clearly intensified, with central banks gradually becoming market administrators, stimulating them at each sign of weakness. The figures do not lie: the MSCI World index rose by 221% from December 2008 to December 2019, representing an annualised price return of 11.86%. This compares to 6.63% between 1969 to 2008. 2008 to 2019 therefore saw a central bank premium of over 5%. Trees do not grow to the sky, but sometimes they appear to. Central banks have clearly become great gardeners over the years and markets are now hooked on their precious fertiliser.

Without making a value judgment, perceiving this paradigm shift is essential when you are in charge of managing portfolios: a large part of the equity returns from the past two years can be explained by the actions of central bankers. Two key observations allow us to embrace the full extent of the phenomenon. Between 2006 and 2019, the correlation between the growth rate of the Fed’s purchases of US Treasury bonds and the yield on the S&P 500 index was 6%. Between 2018 and 2019, it was 31% and, between 2008 and 2009, at the height of the most severe recession in modern capitalism, it reached 40%. From an economic perspective, there are no similarities between 2008/9 and 2018/19 and yet central banks have “made” the market relatively identical during these two periods.

In 2018, the Fed notably put an end to its bond buyback programme, reducing its active holding of government bonds from USD 2.5 trillion to USD 2 trillion between December 2017 and July 2019. Globally, this represents around 50% of bond purchases made during the first wave of direct purchases from September 2010 to August 2011, equivalent to 2.5% of US GDP. Not surprisingly, equity markets lost ground and, a few months later, the Fed not only lowered its key rates, but started buying bonds again.

These purchases were also made at a fairly sustained pace – for the past four months, the Federal Reserve's balance sheet has grown at an annualised rate of 25%. For comparison, between 2013 and 2014, this same rate was 20% whereas between 2010 and 2011 it reached 50%.

Not surprisingly, this injection of liquidity into the system in the second half of last year had two main consequences. First of all, without having really made the headlines, the USD gradually lost almost 3% in a year when it seemed to inexorably be on the rise: the bond buyback led to an increase in money supply which reduced its value.

The second outcome will be more memorable for investors. Without any significant economic improvement, equity markets had a fantastic end to the year. Indeed, economic surprise indices remained unanimously negative or close to zero globally. Despite this sluggish economic cycle, global equities still generated an additional 11% return in four months.

But how did this central bank magic work? After all, neither the Fed nor the ECB bought stocks directly, yet the correlation between bond purchases and equity returns suggests otherwise. When a central bank buys bonds, like the Fed has done, it lowers interest rates, which in turn activates various transmission channels: the ‘loose’ and ‘strict’ interest rates channels as well the ‘risk aversion’ channel. In the simplest of the equity valuation models, the Gordon and Shapiro model, the fall in interest rates has a positive effect on stock prices through the discount factor, reflecting several of these channels.

To get an idea of the magnitude, lowering rates by 100 bps can have the equivalent effect of increasing the dividend growth rate by about 2%. This variation may seem small, but when you understand that it is permanent, it is equivalent to an increase in returns of about 20% over a year. In 2019, the dividend growth rate did not progress and yet equities delivered a performance of more than 20%: the numbers do not lie. It was central banks that orchestrated this performance. Another way of assessing it is to calculate the average performance of equity markets since 2005 when the Fed's balance sheet had grown at a comparable rate. Here again, the answer is an unequivocal 20% per year.

Once more: macro, sentiment and valuation

To anticipate the role of central banks in the coming year, it is necessary to assess the factors that pushed them to contract and expand the Federal Reserve balance sheet. Their aim is to limit the volatility of financial markets and, unsurprisingly, they are a reflection of the factors that drive asset returns: macro, sentiment and valuation. In terms of macro, the soft growth phase we are currently experiencing has been in place since April 2019 according to our proprietary Growth Nowcasters. At this stage, while a further softening remains a possibility, it is not our base scenario. The low inflation phase we are currently experiencing should remain in place and see central banks maintain their accommodative stance.

Nonetheless, two factors could change the situation. Firstly, the fall in interest rates last year will have affected not only markets but also the economy. Historically, a drop in rates from 50 to 75 bps generates additional growth of around 50 bps over one year, with a potential residual effect. Economic growth could therefore still have some momentum left.

Secondly, with the resolution of Brexit and the end of the trade war, two essential factors of uncertainty seem to have disappeared. The current cycle is holding up thanks to consumption, but this reduction in uncertainty could play a decisive role in the recovery of investment. In our US Growth Nowcaster, monetary and financial conditions are the strongest components. If companies regain their appetite, corporate investment could give the US economy a new lease of life.

If this were to happen, we believe that a change of course in monetary policy would be necessary. The resulting (long) rate hike would shake bonds and stocks at the same time. Within equities, the potential steepening of yield curves would benefit financials and value stocks more generally.

This could be one of the potential sources of increased volatility that we expect in the coming quarters. The combination of the marked improvement in market sentiment, as illustrated by equity positioning data, with excessive valuations has given the sentiment factor a dangerously disproportionate role and it could act as a catalyst. Now visibly positive, sentiment could turn quickly, and with financial markets continuing to climb and implied and realised volatility falling, central banks would not hesitate to normalise monetary policy.

How should one protect themselves? We believe that an underweight in credit would help limit the damage. Historically, average yields over the coming year when credit spreads have contracted to this point are consistently negative, regardless of the issuer. We are already underweight investment grade bonds for these reasons. This is an inexpensive insurance policy for a potential risk this year. Our forex value strategy is another hedge we are employing.

These are the risks to our outlook of average growth without inflation leading to a volatile performance of growth assets in 2020. Although their probability remains limited, the consequences would be devastating for markets as no one likes correlation shocks.