ValueWalk
Home Business Evidence For The Mother Of All Economic Booms

Whitney Tilson’s email to investors discussing what is an investor to do when it seems like everyone else is a speculator?; a good chance of a ‘melt up’; evidence for the mother of all economic booms (‘MOAB’) (part 1).

What Is An Investor To Do When It Seems Like Everyone Else Is A Speculator?

In yesterday's e-mail, I started to address the question: "What is an investor to do when it seems like everyone else is a speculator?"

The easiest answer is to ignore the areas of speculation and invest elsewhere. This is what I recommend... and it's what I'm doing in my personal portfolio.

But I recognize that a lot of folks prefer the much riskier alternative that I outlined yesterday: recognize a bubble and know it's going to end badly – but make a ton of money on it before it bursts.

While I don't recommend going this route, for those of you determined to do so, here's my advice...

To pull this off successfully, you need to get in early while the wave is still building, and then – as I explained yesterday, using the case study of Virgin Galactic (SPCE) – "have the judgment and discipline to not get swept up in the mania and instead get out somewhere near the top."

A Good Chance Of A 'Melt Up'

In light of the market's strong rally since stocks bottomed nearly a year ago, is it too late to get in and catch a wave? I don't know for sure... but I have a feeling that my colleague Enrique Abeyta is right when he says there's a good chance of a "melt up," which will be led by tech stocks.

The best historical example of this is what happened to the tech-heavy Nasdaq Composite Index from 1998 into March 2000. Check out this chart (source: Yardeni Research): 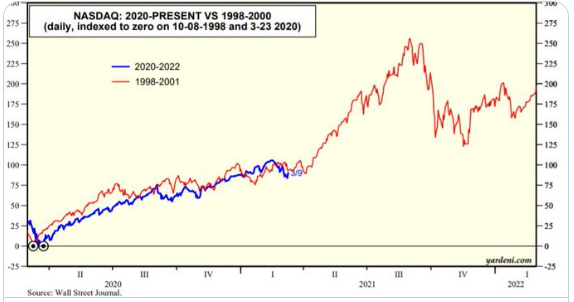 Around that time, however, you had to get out... as the Nasdaq subsequently collapsed by a sickening 80% over the next two-and-a-half years.

As you can see in the chart above, today's setup looks a lot like November 1999...

The Mother of All Economic Booms

Three conditions exist today that could drive a melt-up: a) a high level of animal spirits in the markets (the latest: an exchange-traded fund with the ticker FOMO – "fear of missing out" – will soon hit the market)... b) unprecedented fiscal and monetary stimulus... and c) the "Mother of All Economic Booms" ("MOAB"). 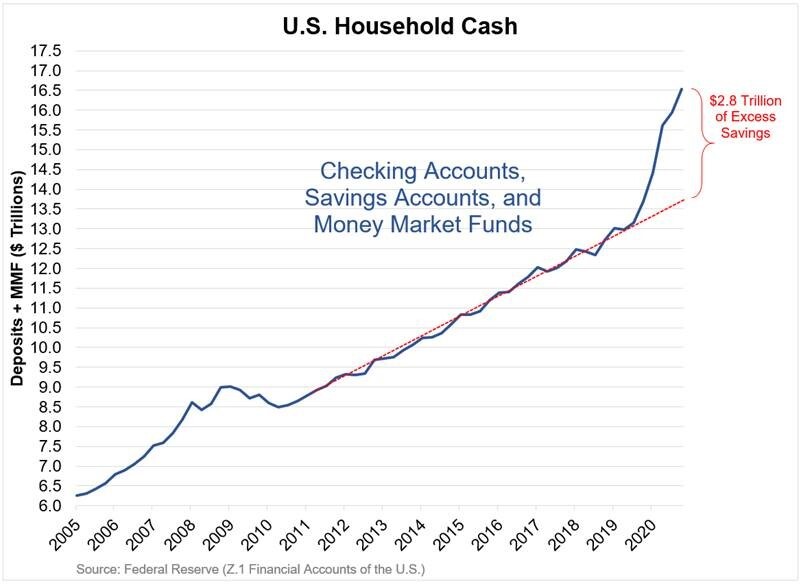 Note the huge difference between the Great Recession and today. Back then, household cash declined by 16% from the third quarter of 2007 to the first quarter of 2009. In contrast, in the fourth quarter of 2020, household cash was already 10% higher than pre-pandemic levels – and this is surely going even higher due to the stimulus payments and child credits in the just-passed American Rescue Plan.

This graphic shows how the pandemic fiscal stimulus dwarfs that of the Great Recession: 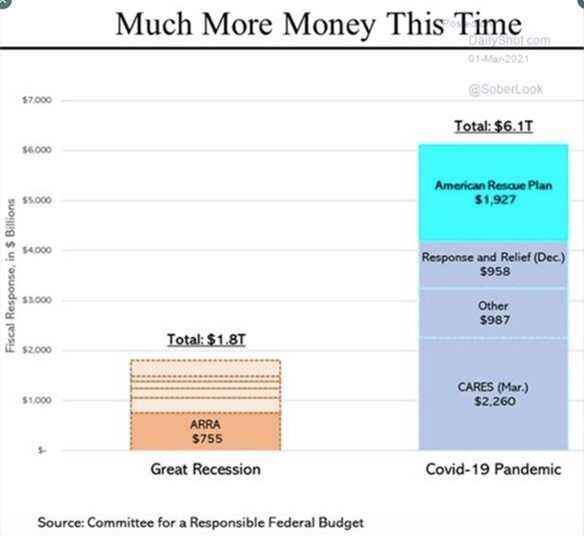 Not surprisingly, all this stimulus, combined with widespread vaccinations leading to a sharp reduction in COVID-19 cases, hospitalizations, and deaths (down 79%, 71%, and 58%, respectively, from their highs only two months ago), is resulting in a huge economic surge. The evidence is everywhere...

Economists' forecasts for first-quarter GDP growth have been rising, with the Federal Reserve Bank of Atlanta predicting 8.4% growth – well above consensus forecasts, as you can see in this chart:

Here's a good overview of the bull case in the New York Times: 17 Reasons to Let the Economic Optimism Begin. Most of the reasons are long-term, but the 17th and final one is immediate:

The post-pandemic era could start with a bang

The last year has been terrible on nearly every level. But it's easy to see the potential for the economy to burst out of the starting gate like an Olympic sprinter.

That could have consequences beyond 2021. A rapid start to the post-pandemic economy could create a virtuous cycle in which consumers spend; companies hire and invest to fulfill that demand; and workers wind up having more money in their pockets to consume even more.