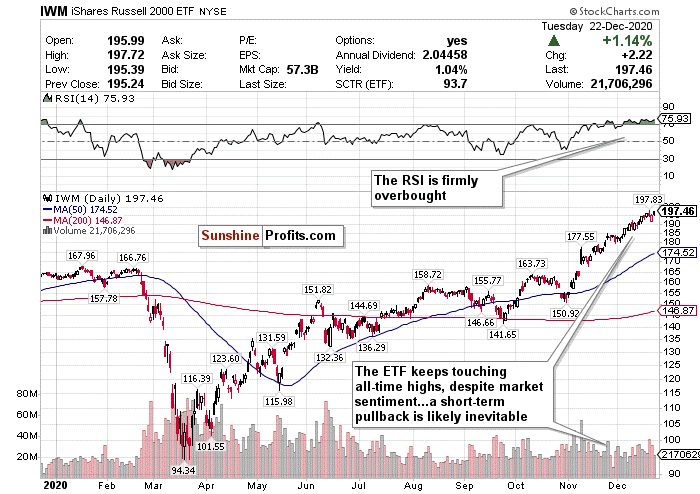 The S&P 500 closed down for the third consecutive day (Dec. 22), despite Congress’s long-overdue approval of an economic stimulus package.

The Economic Stimulus Package Was Too Little Too Late

Markets have officially stumbled before Christmas and experienced a predictable tug-of-war between good news and bad news. While the general focus of both investors and analysts has appeared to be the long-term potential of 2021, there are some very concerning short-term headwinds.

Although there was some anticipation that a stimulus deal could send stocks higher in the near-term, investors may be simply taking profits before the year’s end and rebalancing for 2021. On the other hand, it is very possible that the economic stimulus package was “too little too late,” and is being overshadowed by a more contagious strain of COVID-19 discovered over the past weekend in the U.K.

While nobody predicted a renegade mutant virus weighing on market sentiment, short-term battles between optimism and pessimism were quite predictable.

According to a note released on Monday (Dec. 21) from Vital Knowledge’s Adam Crisafulli

“The market has been in a tug-of-war between the very grim near-term COVID backdrop and the increasingly hopeful medium/long-term outlook (driven by vaccines) – the latter set of forces are more powerful in aggregate, but on occasion, the market decides to focus on the former, and stocks suffer as a result.”

Strategists Are Bullish On Equities For 2021

Meanwhile, the overwhelming majority of market strategists, including myself, are bullish on equities for 2021. It might just be a bit of a bumpy road getting there. I believe that a correction and some consolidation could be very likely in the short-term, on the way towards another strong rally in the second half of 2021. While it is hard to say with conviction WHEN we could see a correction, I believe that the market’s behavior as of late could be a potential preview of what’s to come between now and the end of Q1 2020. There is optimistic potential, but I believe a potential 5% pullback before the year’s end is possible, as well as a minimum 10% correction before the end of Q1 2020.

According to Jonathan Golub , Credit Suisse’s chief U.S. equity strategist, choppiness in the economy and markets in the coming months could be expected before a surge in consumer spending by mid-2021. Golub said, “I don’t think that there’s a smooth, easy straight-line story on this...I think for the next three or four months, the reopening process is going to be sloppy.”

I believe that the S&P’s three-day losing streak could be an ominous sign of what’s to come in the near-term. I do believe though that this is healthy and could be a good thing.

Before Monday’s (Dec. 21) session, I had warned that the market was flashing signs of over-optimism and euphoria. In its most recent survey, for example, the American Association of Individual Investors (AAII) found that 48.1% of investors identified as being bullish - well above the historical average of 38%.

A correction could be just what this market needs. Corrections also happen way more often than people realize. Only twice in the last 38 years have we had years WITHOUT a correction (1995 and 2017). I believe we are overdue for one because there has not been a correction since the lows of March. This is healthy market behavior and could be a very good buying opportunity for what I believe will be a great second half of the year.

The mid-term and long-term optimism are very real, despite the near-term risks. The passage of the economic stimulus package only solidifies the robust vaccine-induced tailwinds entering 2021, specifically for small-cap value stocks.

In the short-term, there will be some optimistic and pessimistic days. On some days, such as Tuesday (Dec. 22), the “pandemic” market trend will happen - cyclical and COVID-19 recovery stocks lagging, and tech and “stay-at-home” stocks leading. On other days, a broad sell-off based on virus fears may occur as well. Additionally, there will also be days where there will be a broad market rally due to optimism and 2021 related euphoria. And finally, there will be days (and in my opinion, this will be most trading days), that will see markets trading largely mixed, sideways, and reflecting uncertainty.

While there is long-term optimism, there are short-term concerns. A short-term correction between now and Q1 2021 is very possible. But I do not believe, with conviction, that a correction above ~20% leading to a bear market will happen.

The premium analysis this morning will showcase a “Drivers and Divers” section that will break down some sectors that are in and out of favor. As a token of my appreciation for your patronage, I decided to give you a free sample of a “driver” and “diver” sector. Please do me a favor and let me know what you think of this segment! I’m always happy to hear from you.

The Russell 2000 small-cap index once again beat the larger-cap indices and gained 1.01% on Tuesday (Dec. 22). Despite the profit-taking and negative sentiment during Tuesday’s (Dec. 22) session, small-caps didn’t get the memo.

I do love small-cap stocks in the long-term and this small-cap rally is more encouraging than the “stay-at-home” stock rallies from April/May. This is a bullish sign for long-term economic recovery and shows that investors are optimistic that a vaccine will return life to relative normalcy by mid-2021.

I do have some concerns about overheating in the short-term though. As I mentioned before, I believe that the S&P’s losing streak is only a preview of what could come in the next 1-3 months.

According to the chart above for the Russell 2000 ETF (IWM) , it becomes pretty evident that small-cap stocks have overheated in the short-term. Stocks won’t always go up, but the IWM’s trajectory since November has been essentially vertical. The ETF keeps hitting record highs while the RSI keeps overinflating way past overbought levels as the volume shows instability.

Although the Russell index is composed mostly of small-cap cyclical stocks dependent on the recovery of the broader economy and may be more adversely affected on “sell-the-news” kind of days, its hot streak since November has seemingly not cooled off as much as other indices and sectors.

But I believe this will eventually happen in the short-term, and I hope it does for a long-term buying opportunity.

In the short-term, small-cap stocks may have overheated and could experience the greatest volatility. SELL and take short-term profits if you can, but do not fully exit positions .

If there is a pullback, BUY for the long-term recovery. 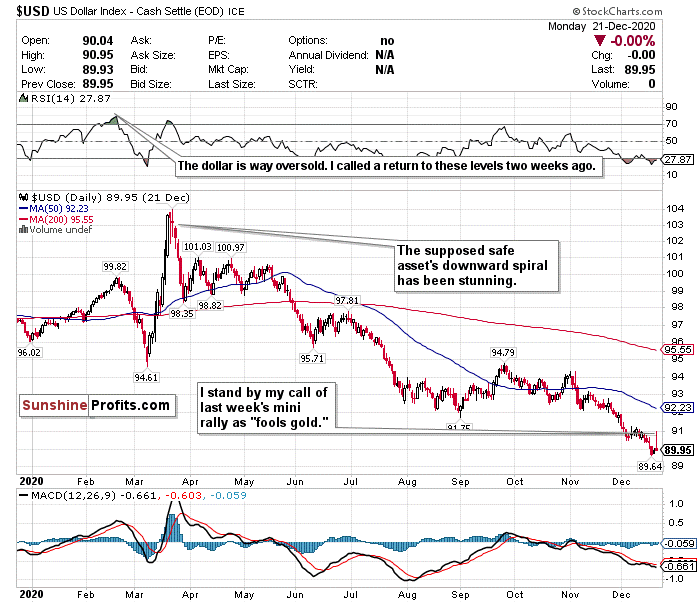 If the dollar rallies at all again soon, do not be fooled.

Ever since I called the dollar’s rally past the 91 level two Wednesdays ago (Dec. 9) a mirage, the dollar has declined by 1.25%.

I believed it to be “fool's gold” then and I believe any subsequent rally that could come will be “fool’s gold” too.

I still am calling out the dollar’s weakness after several weeks, despite its low levels. I expect the decline to continue as well thanks to a dovish Fed.

The world’s reserve currency is still trading below 90 and has not traded this low since April 2018.

Joe Manimbo , a senior analyst at Western Union Business Solutions, seemingly agrees with me as well and said that “the latest blow to the dollar came from the Fed, which vowed not to touch policy even if the outlook for the U.S. economy brightens as it now expects.”

Since hitting a nearly 3-year high on March 20th, the dollar has plunged nearly 13% while emerging markets and other currencies continue to strengthen.

On days when COVID-19 fears outweigh any other positive sentiments, dollar exposure might be good to have since it is a safe haven. But in my view, you can do a whole lot better than the US dollar for safety.

I have too many doubts on the effect of interest rates this low for this long, government stimulus, strengthening of emerging markets, and inflation to be remotely bullish on the dollar’s prospects over the next 1-3 years. Meanwhile, the US has $27 trillion of debt, and it’s not going down anytime soon.

Additionally, according to The Sevens Report , if the dollar falls below 89.13, this could potentially raise the prospect of a further 10.5% decline to the next support level of 79.78 reached in April 2014

After briefly rising above an oversold RSI of 30 last week, the dollar’s RSI is now at an alarmingly low 27.87. The dollar is also significantly trading below both its 50-day and 200-day moving averages.

While the dollar may have more room to fall, this MAY be a good opportunity to buy the world’s reserve currency at a discount as the RSI is oversold. But I just feel you can do a whole lot better than the USD right now.

I’m not a crypto guy either myself, but Bitcoin’s run compared to the dollar’s disastrous 2020 has to really make you think sometimes…. 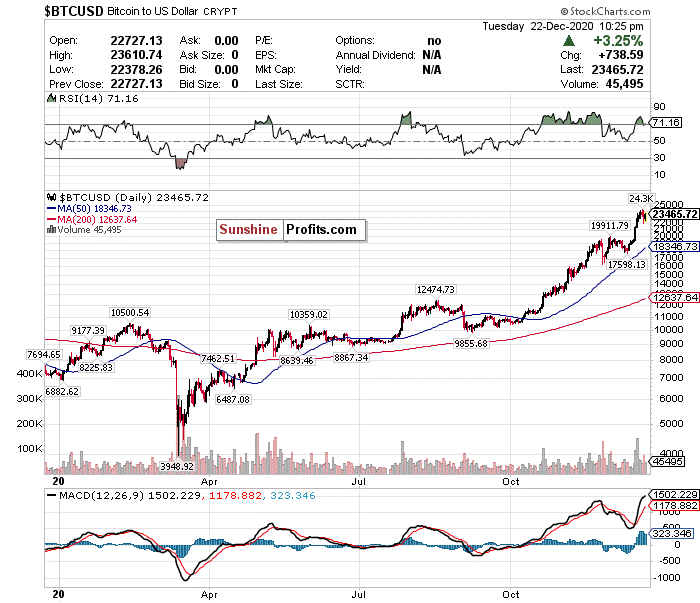 For now, where possible, HEDGE OR SELL USD exposure.