ValueWalk
Home Business Dow Up, Nasdaq Down; Will Cathie Wood Need Her Ark? 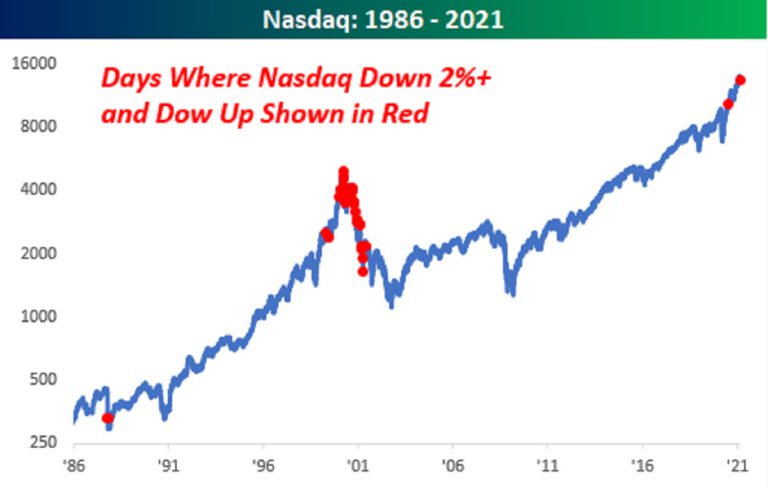 Dow Up, Nasdaq Down

1) Yesterday was an unusual day – it's very rare that the Dow Jones Industrial Average is up, while the tech-heavy Nasdaq Composite Index finishes down more than 2%.

A friend shared this chart showing the only times this has happened in the past 35 years:

Note that nearly every occurrence was during the bursting of the Internet bubble from 2000 to 2001, when the Nasdaq crashed by nearly 80%.

2) Could something similar happen today? My friend Doug Kass of Seabreeze Partners thinks so:

Is it About to Rain for Forty Days and Forty Nights? Will Cathie Wood Need Her Ark?

"For seven days from now I will send rain on the earth for forty days and forty nights, and I will wipe from the face of the earth every living thing I have made." – Genesis 7:4

Over the last two weeks I have cautioned about the risks that ARK's virtuous cycle – perpetuated by massive inflows – runs the risk of being a vicious cycle should outflows commence as Cathie Wood runs her portfolio at 200 miles per hour.

ARK's superior investment performance is, in a relative sense, newly minted, and the byproduct of only two exceptional years, in 2017 and 2020, not by decades of strong relative and absolute result.

To be sure, no one is paying ARK/Wood to be in cash – she is following an aggressive strategy of taking massive inflows and buying into momentum-driven story stocks. This is what she will keep doing until higher interest rates (or other adverse factors) shatter the valuation bubbles of her universe and redemptions come pouring in.

Of course my short of ARKK is anathema to the momentum types, who question the sanity of shorting ARK's momentum in a reflexive and Pavlovian backdrop.

But the drool (and explosion of assets under management at ARK) are self-evident.

To me, history is my teacher – and I have seen the ARK phenomenon before.

Years from now we may be asking the question... "Remember ARK?" just as we do the same today with Gerry Tsai's Manhattan Fund, Tom Marsico's Janus, Ryan Jacob's Internet Fund, and Kevin Landis' The Firsthand Funds.

The names just change and it always ends badly.

3) Shares of software supplier Ebix (EBIX) plunged 40% yesterday (and were down another 14% this morning) after the company's auditor, RSM US, resigned.

According to Ebix's press release:

RSM stated in its letter that its resignation was the "result of being unable, despite repeated inquiries, to obtain sufficient appropriate audit evidence that would allow it to evaluate the business purpose of significant unusual transactions that occurred in the fourth quarter of 2020."

RSM informed the Company that the unusual transactions related to the Company's gift card business in India. RSM also stated in its letter that it had identified a material weakness because "management did not design or implement the necessary procedures and controls over the gift or prepaid card revenue transaction cycle sufficient to prevent or detect a material misstatement."

The company attempted – but failed – to assuage investors in a follow-up press release yesterday morning, Ebix Reaffirms Business Outlook for 2021 and Beyond.

I've known to avoid this stock ever since two short sellers pitched it as their favorite idea at my Kase Learning Shorting Conference on December 3, 2018: Fraser Perring of Viceroy Research (a PDF of his presentation is here) and Mads Thamsborg of Bodenholm Capital (slides here).

They've been proven correct... though EBIX shares have certainly had their ups and downs, as you can see in this chart:

19 Stories Of Strangers Who Found Love While Traveling

4) I loved these: 19 stories of strangers who found love while traveling. Excerpt:

In the spirit of Valentine's Day, By The Way readers share their tales of missed flights, alluring accents and the magic of hostels.

P.S. My youngest 18-year-old daughter is on a 10-week gap year program in Mexico, Guatemala, and Costa Rica. I sent her this article with the warning, "Don't be getting any ideas!" LOL!