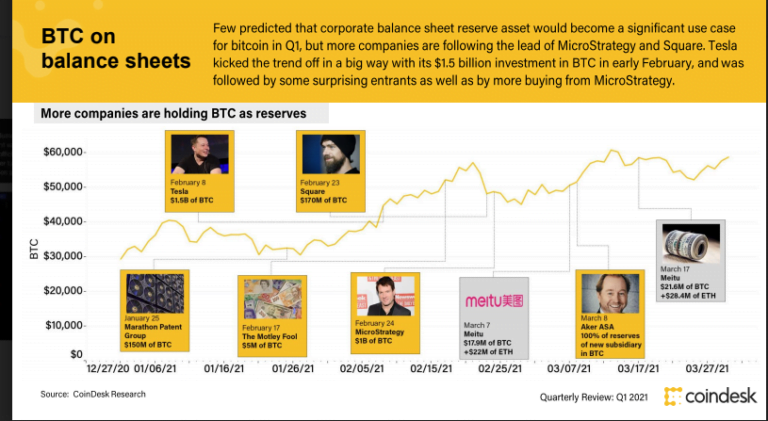 Institutional investors have been driving the surge in demand for bitcoin and fueling the price increase for months. However, it’s starting to look like retail investors are taking back over, according to research from CoinDesk.

That could mean the stability in the rising bitcoin price could be coming to an end, although it shows no signs of slowing down.

More funds and financial institutions started investing their time, money, and reputation into crypto assets during the fourth quarter. For example, Goldman Sachs Group Inc (NYSE:GS) is relaunching its crypto trading desk and will start offering exposure to cryptocurrencies to its private wealth clients.

Despite all that institutional interest, CoinDesk said in a recent report that there are signs that retail investors started to take over the momentum in the cryptocurrency space during the first quarter. The report examined some market and on-chain fundamentals for the largest cryptocurrency by market cap and timelines of critical developments.

According to CoinDesk, not many predicted that significant corporations would start holding bitcoin on their balance sheets, but that trend has been picking up. MicroStrategy Incorporated (NASDAQ:MSTR) and Square Inc (NYSE:SQ) were the first to do it, although more corporations have hopped on the bitcoin bandwagon this year.

CoinDesk notes that three bitcoin exchange-traded funds launched successfully on the Toronto Stock Exchange during the first quarter. Additionally, the over-the-counter price for the Grayscale Bitcoin Trust (OTCMKTS:GBTC) started trading at a discount to its net asset value; both of these factors are ratcheting up the pressure on the U.S. Securities and Exchange Commission to approve a bitcoin ETF in the U.S. The question now is whether Gary Gensler, who’s been nominated to lead the agency, will rule favorably on the cryptocurrency if he is confirmed. He already has ties to the industry, so that bodes well for it.

Bitcoin’s market capitalization surpassed $1 trillion during the first quarter, hitting $1.1 trillion at the end; this marks a significant milestone because, for many institutional investors, an asset is only worth considering when it reaches a minimum size. At a $1 trillion market cap, bitcoin could attract even more attention from large institutions, further increasing its appeal to smaller investors.

Bitcoin’s price performance has been weak for some weeks this year. However, the cryptocurrency broke that trend of weak performance in March with a 30% return, bringing its return to 100% for the first quarter. Bitcoin’s returns in January and February were also above average for those months. For the first time since 2013, has the cryptocurrency had a first-quarter with three positive months.

Bitcoin started the year at a 12-month high, but its market dominance as measured by a percentage of total market cap continued to fall, diving below 60%; This makes a difference because it indicates that the crypto industry is becoming more diversified. It’s also a healthy sign as more use cases and technologies are explored and as more investment opportunities appear.

However, when considering bitcoin’s dominance among the top 20 crypto assets by trading volume, it becomes clear that its dominance has remained stable at 73% over the last 12 months. Meanwhile, Ethereum’s influence on the crypto market is increasing.

Bitcoin spot trading volumes surged at top transparent exchanges starting in the third quarter, but that leveled off in the first quarter after hitting a record daily high of over $7 billion in January. Coinbase led the spot trading volume, followed by LMAX Digital and Kraken.

The surge in bitcoin future volumes during the fourth quarter slowed during the first quarter, although it still ended that quarter at nearly tripled the levels seen one year ago. Open interest in bitcoin futures also decelerated even though volatility increased. At the end of the first quarter, open interest in futures was nearly 350% higher than it was last year at this time.

The increased growth in open interest versus trading volume indicates an increase in leverage, which is noteworthy. The most robust growth came from offshore high-leverage exchanges Deribit, Bybit and FTX.

The CME also started the year off well, growing to become the biggest bitcoin futures exchange based on open interest, which signals the increased institutional activity. The CME has continued to grow, but more retail-focused exchanges like Binance and Bybit have overtaken it. The report predicts that the CME could see rising competition for the U.S.-based institutional market as Cboe is thinking about offering a bitcoin derivative. Meanwhile, it is widening its product set and addressable market by launching bitcoin micro futures in May.