When making decisions regarding the gold mining stocks sector, some will choose to follow price actions while others will use indicator tools. The Gold Miners Bullish Percent Index (BPGDM) is one such tool, essentially being a gauge of overbought and oversold conditions for the gold mining sector with readings plotted on a range between 0 and 100. Anything below 30 suggests oversold conditions while readings above 70 indicate an overbought situation, with a buy or sell signal being triggered when the index reaches an extreme level and then reverses. Because gold stocks move in tune with gold or silver, the index can be useful in determining the direction of the entire precious metals sector as well as acting like a crystal ball when comparing historical patterns.

BPGDM Reveals That The Outlook For The Precious Metals Is Bearish

Most recently, the BPGDM showed the highest possible overbought reading, which gives us an indication that the outlook for the precious metals is bearish. 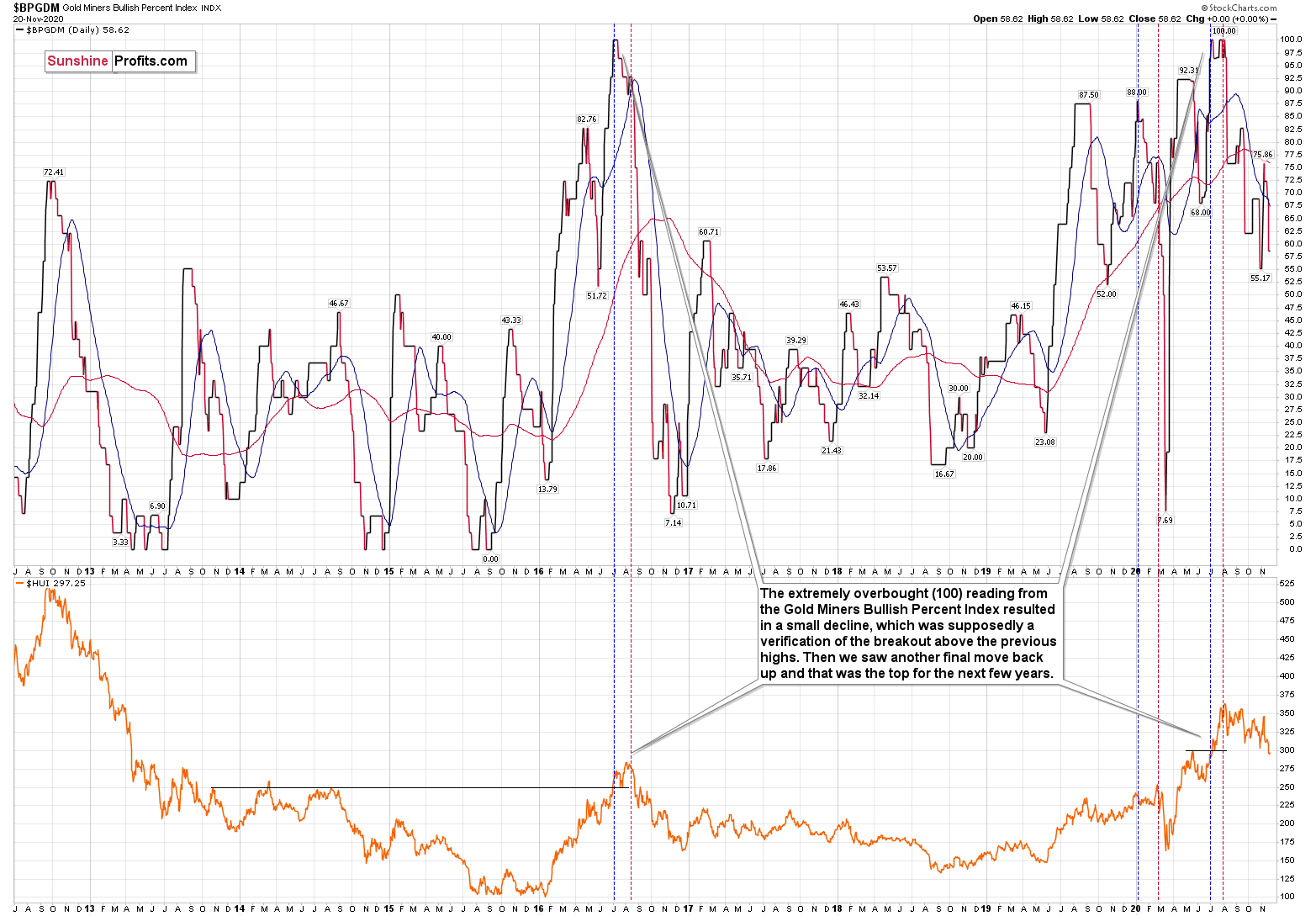 The excessive bullishness was present at the 2016 top as well and it didn’t cause the situation to be any less bearish in reality. All markets periodically get ahead of themselves regardless of how bullish the long-term outlook really is. Then, they correct. If the upswing was significant, the correction is also quite often significant.

Please note that back in 2016, there was an additional quick upswing before the slide and this additional upswing had caused the Gold Miners Bullish Percent Index to move up once again for a few days. It then declined once again. We saw something similar also this time. In this case, the move up took the index once again to the 100 level, while in 2016 this wasn’t the case. But still, the similarity remains present.

Back in 2016, when we saw this phenomenon, it was already after the top, and right before the big decline. Given the situation in the USD Index, it seems that we’re seeing the same thing also this time.

Please note that back in 2016, after the top, the buying opportunity didn’t present itself until the Gold Miners Bullish Percent Index was below 10. Currently, it’s above 50, so it seems that miners have a long way to go before they bottom (perhaps a few months – in analogy to how gold declined in 2016). 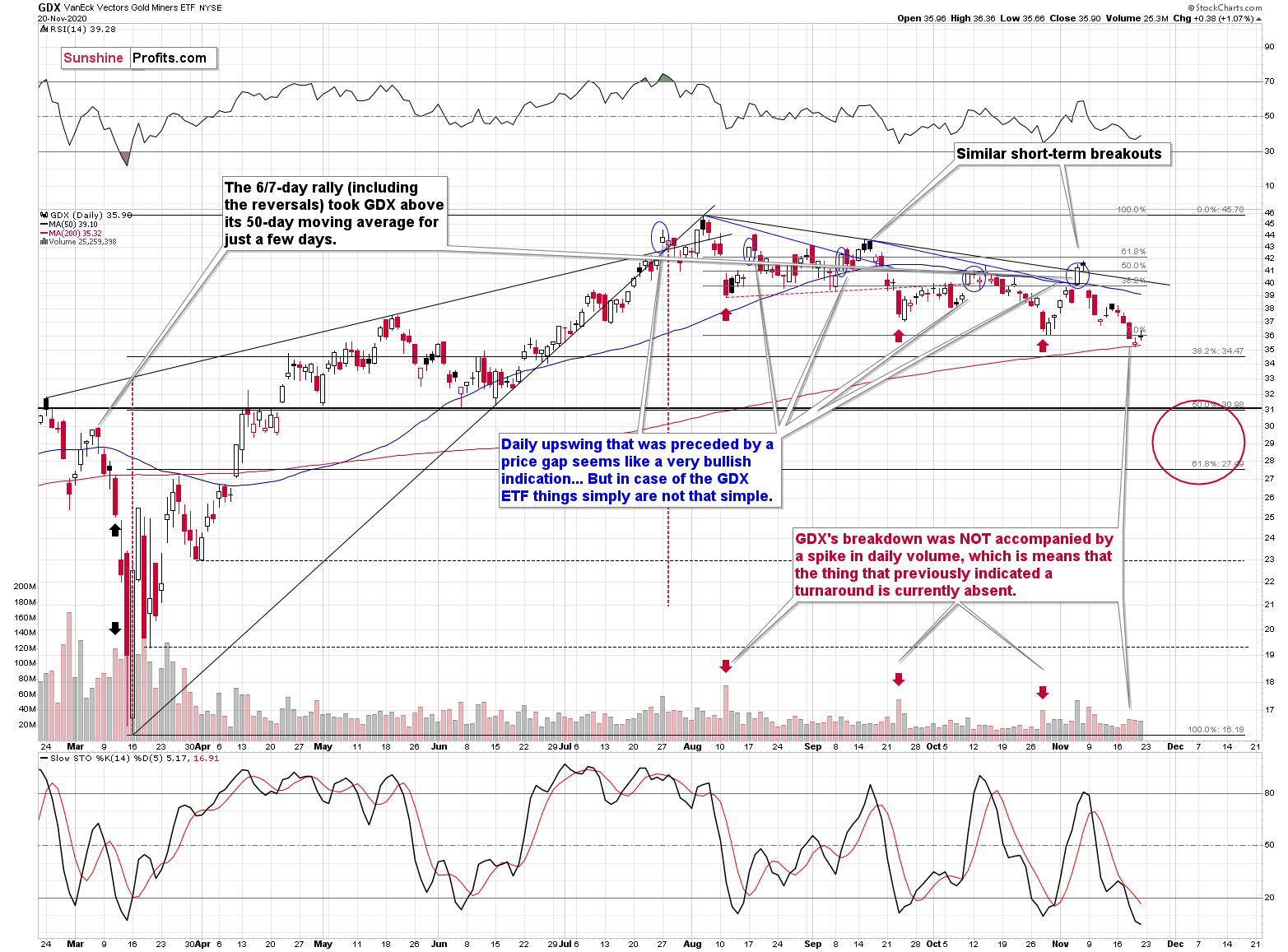 Last week , when I was preparing the analysis of the above GDX ETF chart, I commented on the late-week decline in the following way:

On Thursday (Nov 12 th ) and Friday (Nov 13 th ) of last week, miners moved and closed higher, but it’s important to note that their upswing was tiny and not accompanied by strong volume. In other words, it has all the characteristics of the breather that’s going to be followed by another move in the direction in which the market had been moving previously.

The previous move was down, so the implications are bearish.

The intraday nature of Friday’s and Thursday’s moves is also quite informative. In both cases miners moved higher – just as gold did – but then they declined, erasing a large part of the preceding gains before the end of the session. That’s yet another clue confirming the counter-trend nature of the recent upswing in the miners.

Something similar took place last week, and thus today’s comments will be similar. Gold miners declined early during the initial part of the week, and then they bounced right before the weekend. The volume was decent, but nothing to call home about. What does it mean? It means that we have just likely seen a regular breather that is likely to be followed by further declines.

As indicated earlier, the biggest part of the decline might start shortly after Thanksgiving .

Also, let’s not forget that the GDX ETF has recently invalidated the breakout above the 61.8% Fibonacci retracement based on the 2011 – 2016 decline. 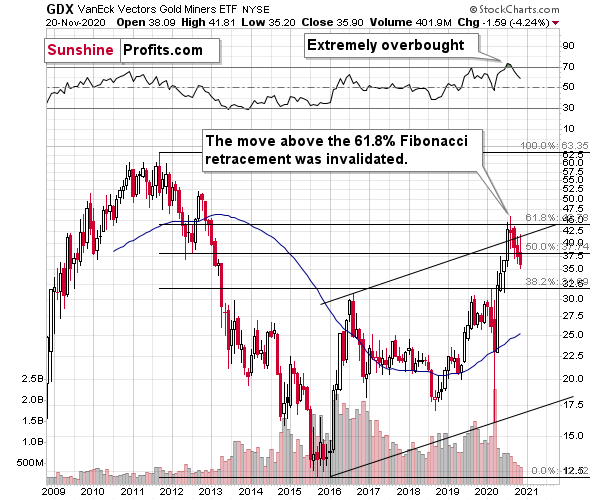 Invalidation Of The Fibonacci Retracement

When GDX approached its 38.2% Fibonacci retracement, it declined sharply – it was right after the 2016 top. Are we seeing the 2020 top right now? This is quite possible – PMs are likely to decline after the sharp upswing, and since there is just more than one month left before the year ends, it might be the case that they move north of the recent highs only in 2021.

Either way, miners’ inability to move above the 61.8% Fibonacci retracement level and their invalidation of the tiny breakout is a bearish sign.

The same goes for miners’ inability to stay above the rising support line – the line that’s parallel to the line based on the 2016 and 2020 lows.

Let’s proceed to metals themselves.

Just as miners , gold seems to be taking a breather. The breather was quite likely to occur after such a big daily (Nov 9 th ) decline, and there’s not much more that we can say about it per se.

Please note that gold is more or less in the midway between the bottom and the 38.2% Fibonacci retracement based on the August – November decline.

Silver, on the other hand, was much higher in relative terms.

What does it mean? It means that silver was outperforming gold on a very short-term basis. This might not be exciting to those who are new to the precious metals market, but it should be very exciting for those who have been following my analyses for some time. Silver tends to outperform gold on a short-term basis right before declines. Consequently, the above serves as a bearish confirmation.

Silver broke below the rising short-term support line since that time, which suggests that the days of the counter-trend rally are numbered. Based on the analogy to other U.S. election years, it seems that we won’t have to wait for long.