Just when you thought cryptocurrencies had bottomed out, the market was hit by yet another crash last week. Bitcoin’s value plummeted 14% in under 24 hours last week, dropping to below $5k, a new low for the cryptocurrency in over a year.

In fact, this has been one of the biggest bear market crashes in the history of Bitcoin. In a period of about 300 days, Bitcoin has slumped over 80% from $19.6k to about $3.7k. Back in 2011, the cryptocurrency nosedived almost 97% to $2.2, shedding nearly all its value.

Marius Kramer, touted as a cryptocurrency expert, highlighted that the correction could be triggered by investors who entered the market at below $5k, liquidating their investments in the cryptocurrency to avoid losing their initial investment - eventually driving its price down further.

Why is Bitcoin plummeting?

Despite critics, Kramer claims that the recent pullback was engineered by crypto whales who manipulate prices regularly. They have driven the crypto market lower, where the Bitcoin reached a 14-month low of $3.5k.

The speculative movements in the cryptocurrency market may result in significant losses for investors and could cause the market to tank. Most often, crypto whales use this move to re-enter the market at a much cheaper price.

Despite the catastrophic crypto developments of late, Kramer claims the downturn is simply the calm before the storm.

Bitcoin has risen by an average of 17x in every bull run. With the cryptocurrency trading at $4k per coin, a 17X return — the price might touch $68k. However, with the next bull run at least six months away, the market might well be choppy heading into the end of 2018. 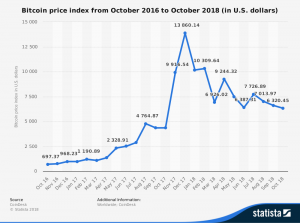 Crypto experts believe that the next rally will begin around Jan. 24, 2019, which is the estimated launch date of BAKKT - a trading platform for digital assets that is set to be launched by NYSE owner, Intercontinental Exchange (ICE).

Kramer expects Bitcoin’s price to rise to $10k around this time. He has also predicted a pullback to around $6k shortly after its rise.

Here’s a timeline of Kramer’s forecast for the cryptocurrency.