ValueWalk
Home Business Will Biden Overheat The Economy And Gold? 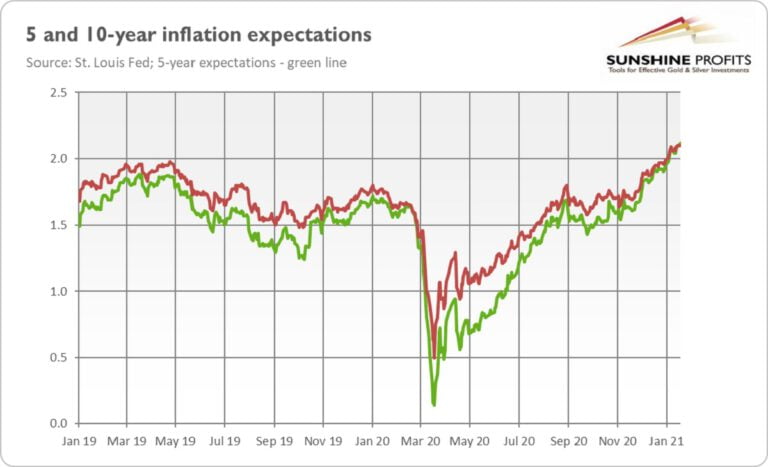 Under the Biden administration the economy could overheat, thereby increasing inflation and the price of gold.

Biden's Sttimulus Package Would Overheat The Economy And Gold

In January, Biden unveiled his plan for stimulating the economy, which is struggling as the epidemic in the U.S. continues to unfold. Pundits welcomed the bold proposal of spending almost $2 trillion. Some expenditures, especially on vaccines and healthcare, sound pretty reasonable. However, $1.9 trillion is a lot of money! And a lot of federal debt , as the stimulus would be debt-funded!

So, there is a risk that Biden’s package would overheat the economy and increase inflation. Surprisingly, even some mainstream economists who support the deficit spending, notice this possibility. For instance, former Treasury Secretary Larry Summers, said that Biden’s stimulus could lead the economy to overheat, and that the conventional wisdom is underestimating the risks of hitting capacity. Although he doesn’t oppose the idea of another stimulus, Summers noted that “if we get Covid behind us, we will have an economy that is on fire”.

Indeed, this is a real possibility for good reasons. First, the proposed package would not only be large in absolute terms (the nominal amount), but also relative to the GDP . According to The Economist , Biden’s proposal is worth about nine percent of pre-crisis GDP, nearly twice the size of Obama’s aid package in the aftermath of the Great Recession .

And the stimulus is also large relative to the likely shortfall in the aggregate demand. I’m referring here to the fact that the winter wave of the coronavirus would be less harmful for the economy – and that there have already been big economic stimuli added last year, including a $900 billion package passed no earlier than in December.

The Hoarding Of Stimulus And Injecting It Back In The Markets

Oh yes, politicians were really spendthrift in 2020, and – without counting the aid passed in December – they injected into the economy almost $3 trillion, or about 14 percent of pre-crisis GDP, much more than the decline in the aggregate demand. In other words, the policymakers added to the economy more money that was destroyed by the pandemic .

But the tricky part is that Americans simply piled up most of this cash in bank accounts, or they used it for trading, for instance. Given the social-distancing measures and limited possibilities to spend money, this outcome shouldn’t actually be surprising. However, the hoarding of stimulus shows that it has not yet started to affect the economy – but that can change when the economy fully reopens and people unleash the hoarded money. If all this cash finally reaches the markets, prices should go up.

You see, the current economic downturn is unusual. It doesn’t result from the fact that Americans don’t have enough income and cannot finance their expenditures. The problem is rather that people cannot spend it even if they wanted to. Indeed, economic disruption and subdued consumer spending are concentrated in certain sectors that are most sensitive to social distancing – such as the leisure, transport and hospitality industries – rather than spread widely throughout the whole economy. So, when people will finally be able to spend, they will probably do so, possibly accelerating inflation .

As well, normally the Fed would tighten its monetary policy to prevent the rise in prices. But now the U.S. central bank wants to overshoot its inflation target, so it would not hike interest rates only because inflation raises to two percent or even moderately above it.

Another potential inflationary driver is dollar depreciation, which seems likely, given the zero-interest rates policy and the expansion in the U.S. twin deficit .

Hence, without the central bank neutralizing the fiscal exuberance, it’s possible that Biden’s plan would overheat the economy, at least temporarily. Of course, that’s not certain and given the small Democrats’ majority in Congress, the final stimulus could be lower than the proposed $1.9 trillion. But it would remain large and on top of previous aid packages and pent-up demand, which makes the overheating scenario quite likely.

Actually, investors have already started to expect higher inflation in the future – as the chart below shows, the inflationary expectations have already surpassed pre-pandemic levels. 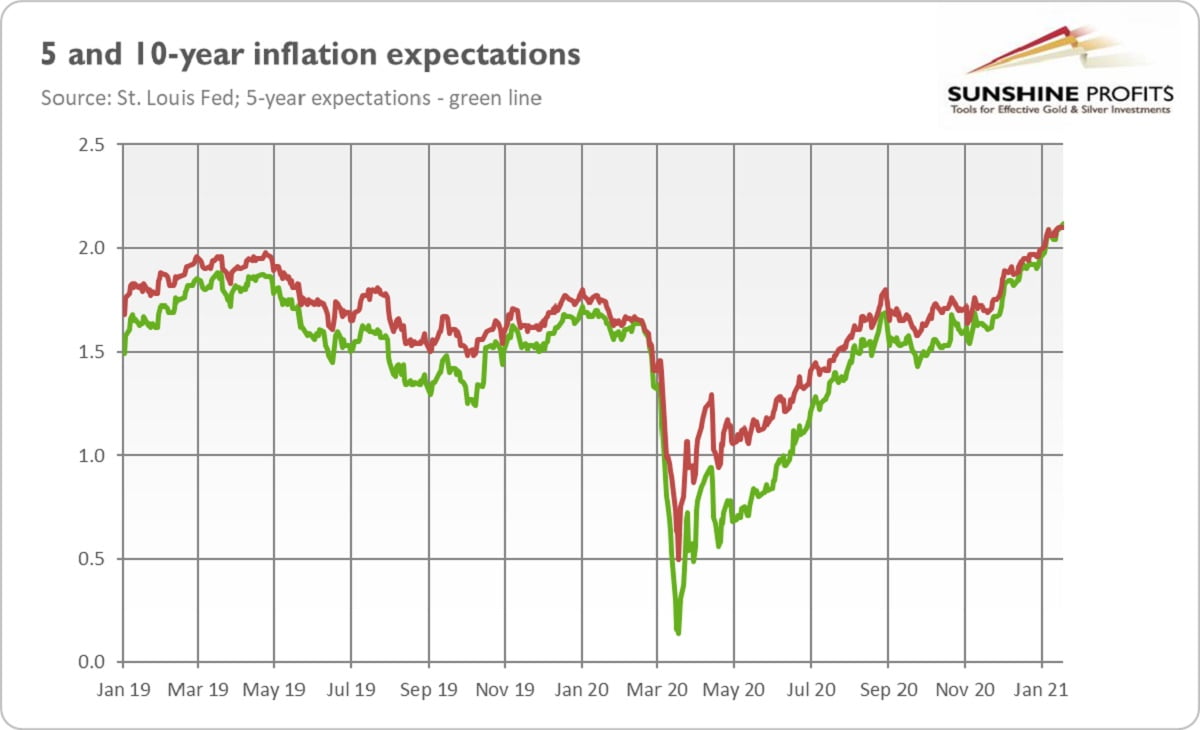 Gold As An Inflation Hedge

From the fundamental perspective, this is good news for the gold market. After all, gold is bought by some investors as an inflation hedge . Moreover, the acceleration of inflation would lower real interest rates , keeping them deeply in negative territory, which would also be positive for the yellow metal.

So, although the expectations of higher fiscal stimulus plunged gold prices in January, more government spending – and expansion in budget deficits and public debt – could ultimately turn out to be supportive factors for gold. Especially if easy fiscal policy will be accompanied by the accommodative monetary policy – in particular quantitative easing and a rising Fed’s balance sheet – and inflation.