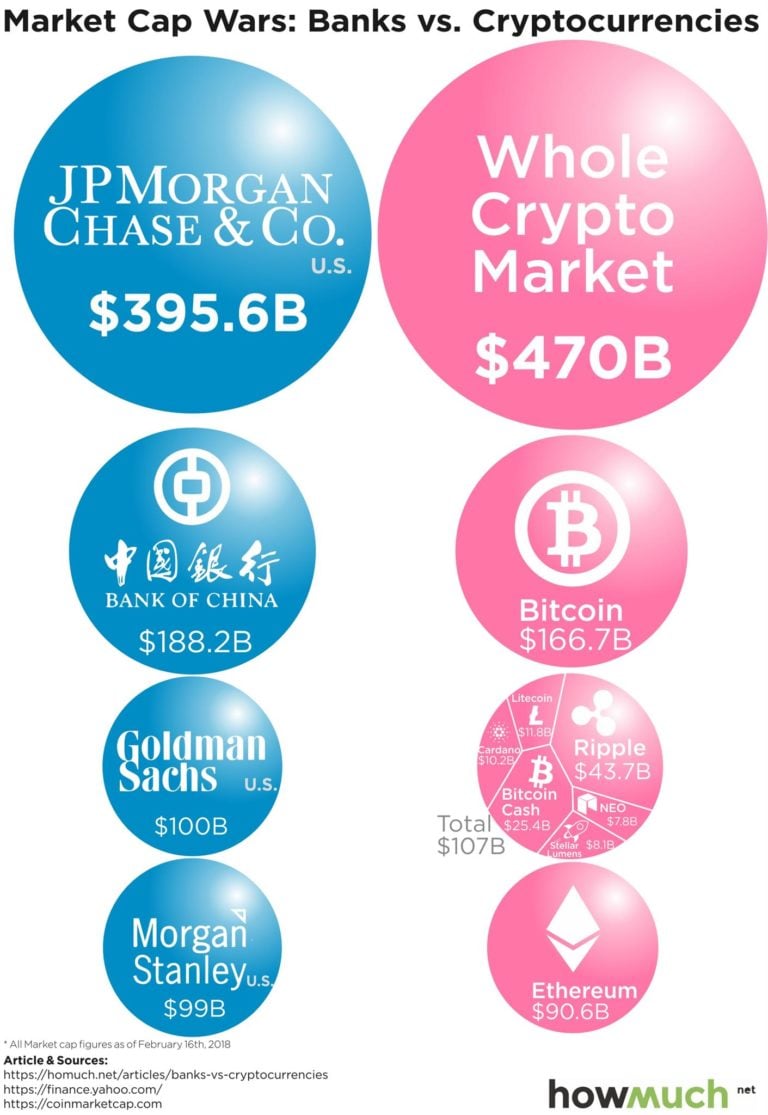 Banks have largely been against cryptos, often citing the volatility and the ability to be used for money laundering. This is a bit of an ironic criticism coming from banks that are seemingly paying massive sums of money on a regular basis to settle allegations of money laundering or other financial crimes. The real answer to why the banks’ dislike cryptocurrencies is most likely that they feel threatened. The rise of cryptocurrencies has exceeded all expectations and, while the concept is still very young, it does have potential to shake up the aging fiat system. In order to understand the race between the banks and cryptocurrencies, we developed a visual to see just how “David” is comparing to “Goliath.”

After an extremely volatile start to 2018, cryptocurrencies are once again on the rally track. As of February 16, 2018, the total crypto market had a market cap of $470 billion (as of February 16th, 2018), which exceeds the size of the United States’ largest bank, JPMorgan Chase.

Bitcoin’s market cap alone is comparable to Bank of China’s. The second largest cryptocurrency by market cap, Ethereum, is comparable in size to Morgan Stanley. It is stats like these that have the global banking sector worried that cryptocurrencies are on track to make a serious impact on their operations.

One of the most recent efforts to help slow the pace of crypto growth were announcements from several banks saying that customers could no longer purchase digital currency with their credit cards. Charlie Munger, the 94-year-old Berkshire Hathaway Vice President has called Bitcoin “totally asinine” and says “it’s disgusting” that people buy cryptocurrency.

Overall, cryptocurrencies are seeing their size and value top even some of the largest financial institutions in the world. This has caused banks to fight back and attempt to slow their growth. However, even banks clearly don’t know what they really want. After JPMorgan CEO Jamie Dimon famously called Bitcoin a “fraud” in late 2017, it is interesting to now see a report published by the investment bank that calls Bitcoin-based ETFs the “holy grail for owners and investors.” Clearly, we have a bit of a Jackal-Hyde situation going with the banks, which can’t decide if cryptocurrencies are friend or foe.

So what do you think: Are Banks Afraid of Cryptocurrencies?