Americans are typically known for their ability to work long hours. Or at least that’s the perception for many people across the globe, but it is actually true? Are Americans actually getting as much work done as they claim to be during the workweek?

Both business owners and employees struggle with the never ending amount of distractions in a given workday. Between assigned work and issues at work combined with the ever rising amount of digital distractions coming from phone, email, texts, social media, it is harder than ever to actually get a full day’s work each day.

Solitaired recently surveyed over 1,200 American workers who work in a traditional office role, to learn more about employee productivity and the most common workplace distractions that American workers deal with.

American Workers Take On Average 43 Minutes Of Breaks Per Day

The first part of the survey asked American workers exactly how much time they think that they spend on breaks during a given workday. The survey found that the average American worker believes that they take on average 43 minutes of breaks per day. After all this probably seems accurate for most American workers.

However, the survey went deeper and presented surveyed respondents with a full list of common tasks and distractions in the workplace. The list was comprehensive and asked American workers to write down how much time they spend on each task each day. The list covered things like bathroom breaks, time spent walking, time spent on social media and listening to music, thinking about loved ones and friends, caring for children and pets, communicating with colleagues, friends, family members and partners and well and running chores and errands among other things.

After that we found the actual number of time spent on breaks each day and the number is going to surprise you. The survey from Solitaired found that the average American worker actually takes around 2.7 hours of break time each day. This shows that Americans were off their original estimates about over 2 hours each day. 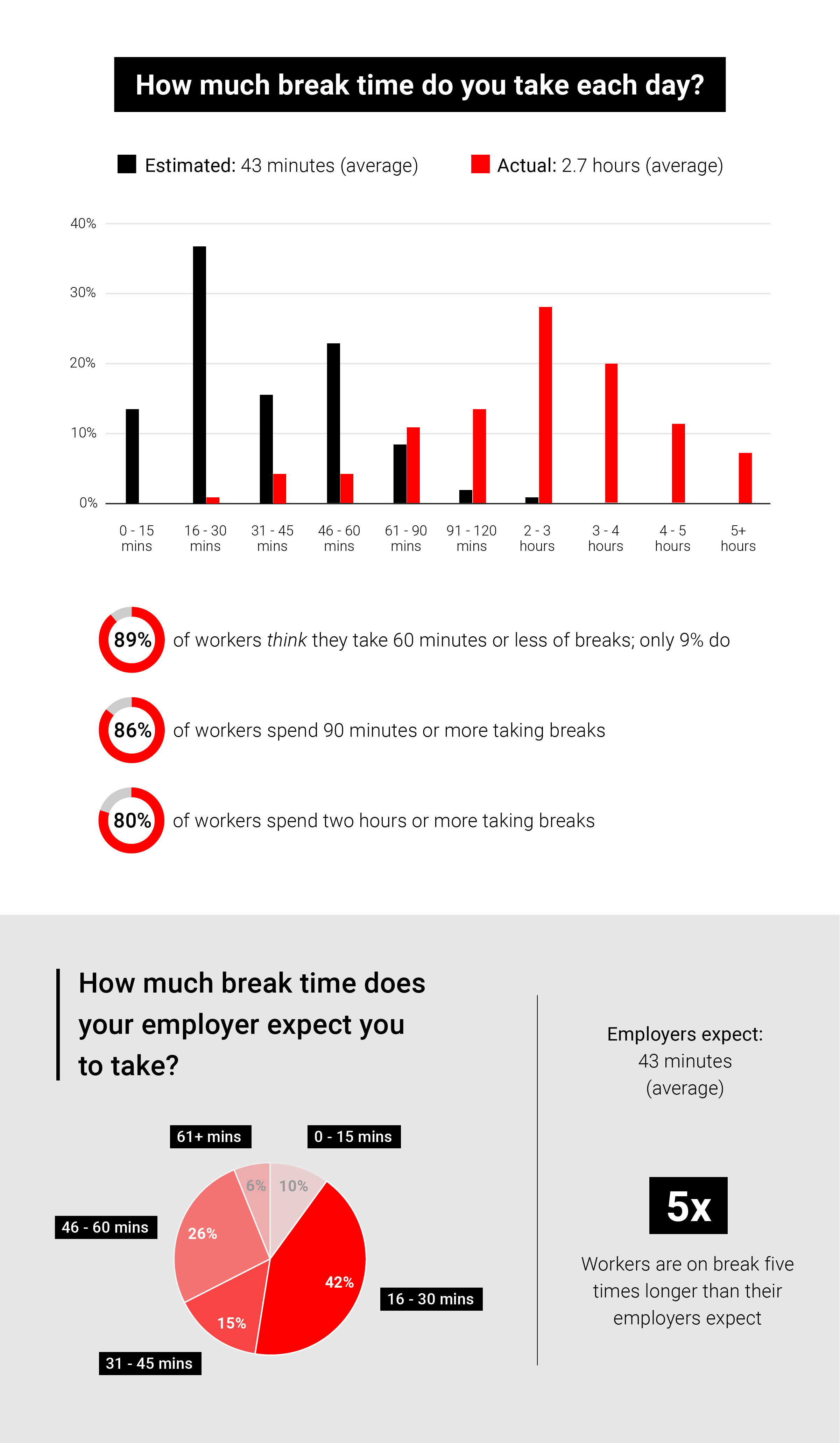 Some of the other findings from the report:

The Most Common Apps Used During Work Hours

The next part of the survey asked American workers about the most common apps that they use during work hours. After all our cell phones are one of the most common types of digital distractions in the workplace. The top apps used by American workers include texting, checking personal email, banking and personal finance apps, social media apps like Instagram, YouTube, and Facebook as well as the popular shopping app Amazon.

The final part of the survey asked about multitasking at work. As it turns out, remote workers are better suited for multitasking than their in-office counterparts with 78% of remote workers saying they multitask better at home than they did while working in the office.