Contrary to the expectations of market bears, US high yield bond issuances are coming in fast this year – with recent figures from Moody’s estimating January 2018’s month-long high-yield bond issuance to have grown 15% compared against January 2017’s $36 billion. What are the factors in play?

Legislative Change - Business Interest Expenses
The US Tax Cuts and Jobs Act included a number of far reaching changes to corporates – the major change of business interest expenses no longer being accepted as fully deductible was, at first glance, expected to impact high yield bonds negatively. But issuers have not been put off.

Taking a closer look at the expenses element of the new tax legislation, the changes as announced by US President Trump on December 22nd, 2017, prescribe that business interest expenses are fully deductible until reaching the 30% to EBITDA (earnings before interest, taxes, depreciation, and amortization) level. While at first sight, we might expect this change to stifle dollar-denominated high-yield bond issuance that has been far from the reality, so far.

The change will indeed impact the worst-rated bonds – the debt segments originating from the most financially stressed companies. However, a significant number of high-yield issuers ranked above Moody’s B3 ranking, can often fall short of the 30% threshold and as such will not experience the potential reform led setback.

Issuers Undeterred
However, recent research from Moody’s indicates that even issuers of the very lowest rated bonds have not been put off by the corporate tax reform - with the issuance tally up to January 25th, 2018 amounting to $3.9 billion of new bonds rated at B3 and $1.9 billion graded at the lower, Caa. Further to this, $5.5 billion of offerings rated B3 or lower represent a significant 15% (approx) of the total $35.7 billion amount of dollar-denominated high-yield bonds issued over the same time frame.
On top of this dollar-denominated high- yield bond issuance is forecast to produce 3% annual growth this year – reaching a total of $468 billion. 1

What’s Driving Issuers?
Not necessarily reassuring as to the stability of markets, it appears that the primary driver of high yield bond issuance is the very ability to refinance. Corporates are refinancing outstanding bonds and loans and demand for the higher coupons on offer in this debt segment is sustaining the trend. With an average high-yield coupon of 6.38% available from high yield debt, demand, and subsequently supply, is forecast to continue along this growth path for the remainder of the year. These debt assets offer investors an attractive 77 basis points above the average speculative-grade investment of 5.61%, according to data from Barclays Capital. 1

There are additional factors driving the higher levels of issuance – including elements from the very same tax reform legislation. The tax reforms also implement lower US corporate tax rates to 21% from 35% and allow companies to fully write off capital expenditures in the year spent for at least the next five years. These factors will leave companies with extra capacity for investment and are expected to fuel increased M&A activity this year, albeit only to a moderate degree. We can expect to see increased high yield bond issuance in parallel to support these M&A aspirations.

From a risk perspective, the increased issuance is not necessarily reckless. Moody’s estimates the US' trailing 12-month high-yield default rate will average 2.4% during Q4 2018 – a respectable improvement against December 2017’s 3.3%.1 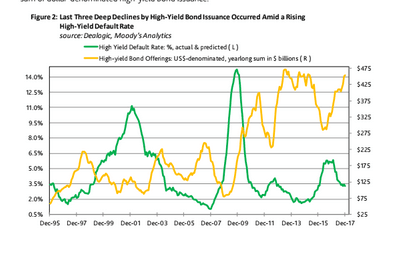