I made the purchase almost immediately after reading this write-up on Value Investors Club – because it was that compelling. (It was posted anonymously; I only learned last week that the author was an old friend of mine, Harris Kupperman, president of the hedge fund Praetorian Capital Management.)

Today, I'd like to highlight what was so compelling about this investment opportunity...

The first thing I could see by the stock chart, which looked like this on April 27, 2020, the day I first learned about this stock (and purchased it): 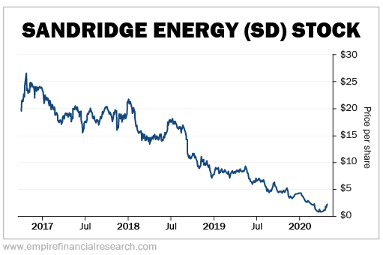 Over the previous three years, the stock had fallen by a staggering 97% before more than doubling over the past month to the $1.95 price – which was when I bought it.

When you see stock charts like this, you're rarely looking at a typical stock but rather one with the characteristics of an option – meaning that the range of outcomes is very wide and likely bimodal. In other words, there's a good chance that stocks like this will go to zero – but if the company survives, there can be many extreme upside scenarios: a double, a five-bagger, a 10-bagger, etc.

Unlike a stable blue-chip company such as Berkshire Hathaway Inc. (NYSE:BRK.B), in which the 80% range of outcomes is, I'd estimate, that the stock compounds at somewhere between 3% and 13% annually over the next five years. You need to do an expected-value analysis of a stock like SandRidge.

Even though I assumed that there was a 30% chance that I'd lose all of my money plus another 20% chance of losing half, my expected value was nevertheless an 80% return in 18 months. That's pretty darn attractive, isn't it?

However, this type of analysis is very sensitive to all of the estimates, and it's easy to fall into the GIGO trap: garbage in, garbage out.

The key variables when investing in any option are price relative to upside potential and duration. Kupperman made a compelling case for both with SandRidge.

Regarding the former, Kupperman argued:

Investing in SandRidge gives you the ability to purchase a Class B office building in Oklahoma City for roughly the current enterprise value. You also get access to 7.7-8.6 MMBOE [million barrels of oil equivalent] of 2020 production (45% liquids) almost for free...

SandRidge is very leveraged to natural gas, [and] there are a bunch of assets that may have no bid today but likely more than cover the EV [enterprise value] under many scenarios, giving you a free look at a natural gas recovery...

The duration of the option is just as important as the upside. A rebound in natural gas prices in, say, six months wouldn't help SandRidge shareholders if the company filed for bankruptcy a month later. Kupperman addressed this as well:

I am bullish [on] natural gas and think oil eventually recovers. I want to play that recovery, but most options out there involve a lot of financial leverage with a severe risk of permanent impairment if I get it wrong on timing. If my timing is wrong and gas kicks along at $2.25 and oil at $15, SandRidge muddles forward as a perpetual call option for a few years (due to the balance sheet strength), meanwhile everyone else melts away, and eventually, energy prices recover as there are no producers left. You cannot say that many other companies can survive a long downturn in energy prices, except the large integrated majors, but those guys don't have the same sort of upside that SandRidge does...

I want to underscore what Kupperman wrote: "I am bullish [on] natural gas and think oil eventually recovers. I want to play that recovery..."

In other words, an investment in SandRidge in late April last year wasn't primarily a bet on the company, its CEO, or the value of its headquarters building. That's why I was able to move so quickly: I didn't need to do any research on these things. No, this was a bet that the price of natural gas and, to a lesser extent, oil would recover.

Was that a reasonable bet? I think so. Here's what the price charts looked like at the time: 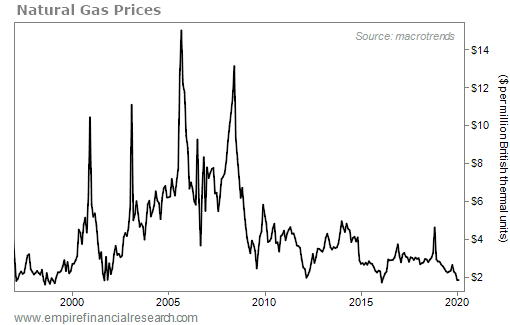 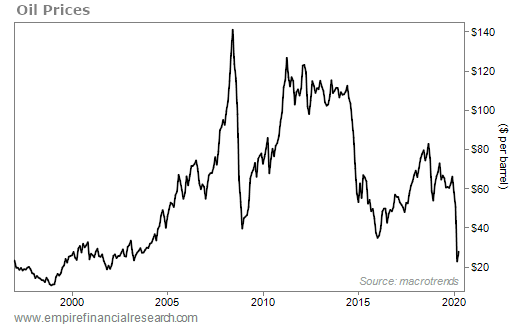 You can see from these charts that natural gas prices were at a level only seen a few times in the previous two decades, and oil was experiencing an even more infrequent sell-off.

Importantly, you can see from these charts that whenever the prices of both commodities had reached such low levels in the past, they had always rebounded quickly.

Reversion to the mean is a powerful phenomenon, especially when talking about commodities. Capacity can be rapidly removed if prices are too low, thereby correcting the supply-demand imbalance.

The demand for natural gas and oil was depressed due to the pandemic that shut down much of the world. But as my readers will recall, I became very optimistic starting in March 2020 that we would get a handle on the pandemic. This made me very bullish on stocks in general – and SandRidge was a leveraged way to play this.

In summary, for all of these reasons, I was quickly able to determine that SandRidge was one of the most mispriced options I'd ever seen – and I acted accordingly, buying 25,000 shares at $1.95.

I'll continue my analysis of SandRidge tomorrow, discussing the portfolio management aspects of this investment...