1) Alphabet (GOOGL), one of the original core holdings in both of our flagship newsletters, Empire Stock Investor and Empire Investment Report, reported blowout earnings after the close yesterday.

The only reason the stock isn't up big today is that it was already up 58% for the year, far surpassing the 18% average gain of the other tech giants, Apple (AAPL), Amazon (AMZN), Microsoft (MSFT), and Facebook (FB).

We continue to believe that this company has a long growth runway ahead of it and that the stock will follow.

2) An increasingly important driver of the stock going forward is likely to be share repurchases. Last quarter, Alphabet also bought back $12.6 billion of its stock, continuing the recent surge in this area over the past five years, as you can see in this chart: 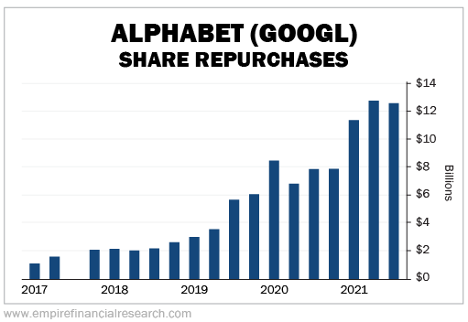 Keep an eye on this. While Alphabet's share count only declined by 1.4% year over year, I think this will increase substantially over time as the company continues to gush free cash flow.

3) To see what an enormous impact this can make over time, just look at Apple. Under its founder Steve Jobs, the company rarely repurchased any shares. But then Jobs died in 2011, and activist investor Carl Icahn started pushing for repurchases in late 2013. The company began to do so in increasing size, continuing through today, as you can see in this chart: 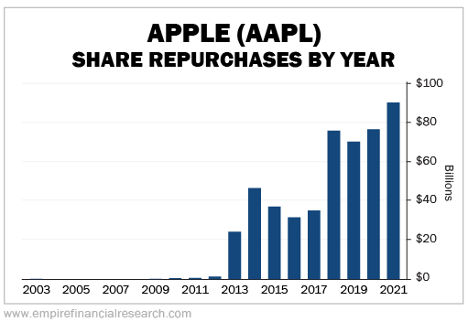 As a result, Apple's diluted shares outstanding have declined by a stunning 35% (which translates into a 54% boost in earnings per share), as you can see in this chart: 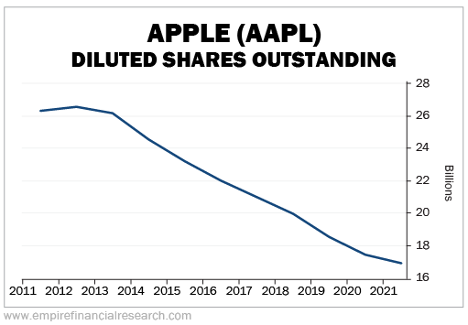 The performance of the business is most important, but the share repurchases have also been an important contributor... 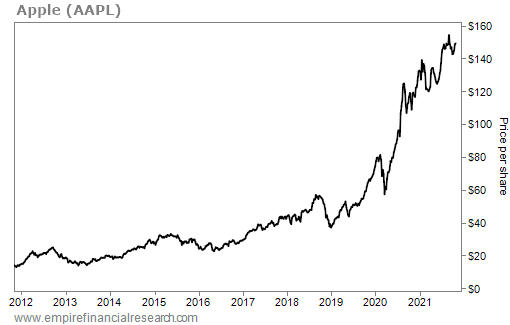 Going forward, however, I don't think Apple's share repurchases will provide nearly the same tailwind because its share price has risen so high that even the increase in share repurchases from $70 billion per year in 2019 to $90 billion in the past 12 months isn't moving the needle as much.

As you can see in this chart of the year-over-year decline in diluted shares outstanding by quarter, the decline has been shrinking for nearly three years: 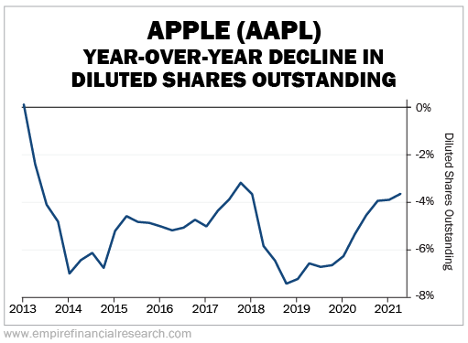 With this year's run-up in its stock price, the math is similar for Alphabet, but just not quite to the same degree, as its market cap is less than $1.9 trillion versus nearly $2.5 trillion for Apple.

Why Whitney Likes Alphabet More Than Apple - And Buffett Doesn't

4) As I compare these two companies, it's worth looking back to the article I published in July 2018: Why I like Alphabet more than Apple – and Buffett doesn't.

As you can see in this chart, I was right that Alphabet would outperform – it's up 120%, double the rise in the S&P 500 Index – but dead wrong that it would do better than Apple's stock, which is up more than 200%: 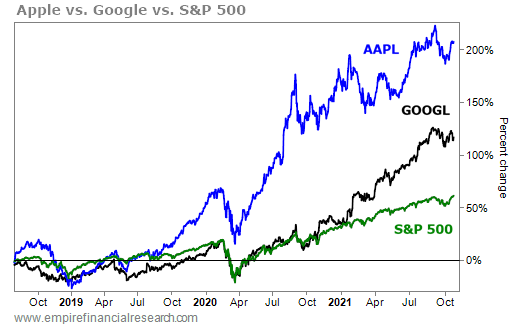 I'd like to think that, rather than being wrong, I was simply early. As you can see in this chart, over the past 14 months, Alphabet has far outperformed both the S&P 500 and Apple, which I think is likely to continue in the coming years: 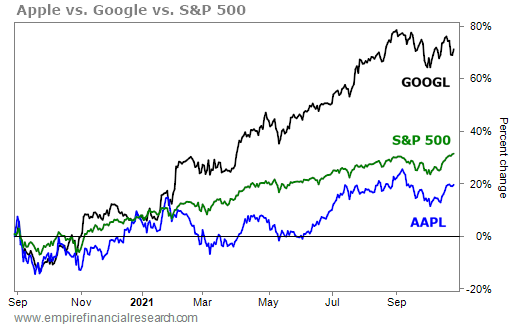