ValueWalk
Home Business Where Did Amdocs’ Profits And Auditors Go? 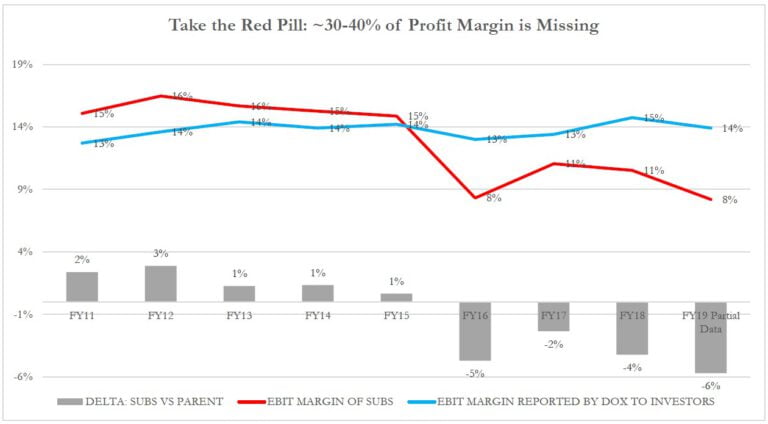 Today, we reveal the results of a months-long investigation into what we believe is a massive financial deception taking place at Amdocs (DOX). The information we are revealing has never before been seen by investors.

We have gathered extensive evidence from the national corporate registry filings of dozens of subsidiaries from around the globe, which we then compared to DOX’s public filings. We found wildly overstated profit margins, a balance sheet that is far from the cash-rich fortress it appears to be, and a revolving door of company auditors resigning from their posts in multiple countries. These enormous discrepancies between DOX’s true business health and the mirage that is its reported finances simply do not reconcile.

We have alerted DOX’s auditors, the press, and others who will be interested in these discoveries. We are available at info@jehoshaphatresearch.com for questions.

In our view, this stock is uninvestable.

Executive Summary: Amdocs' Profits Overstated by ~40-50% as Subsidiaries Have Irreconcilable Differences With Parent: 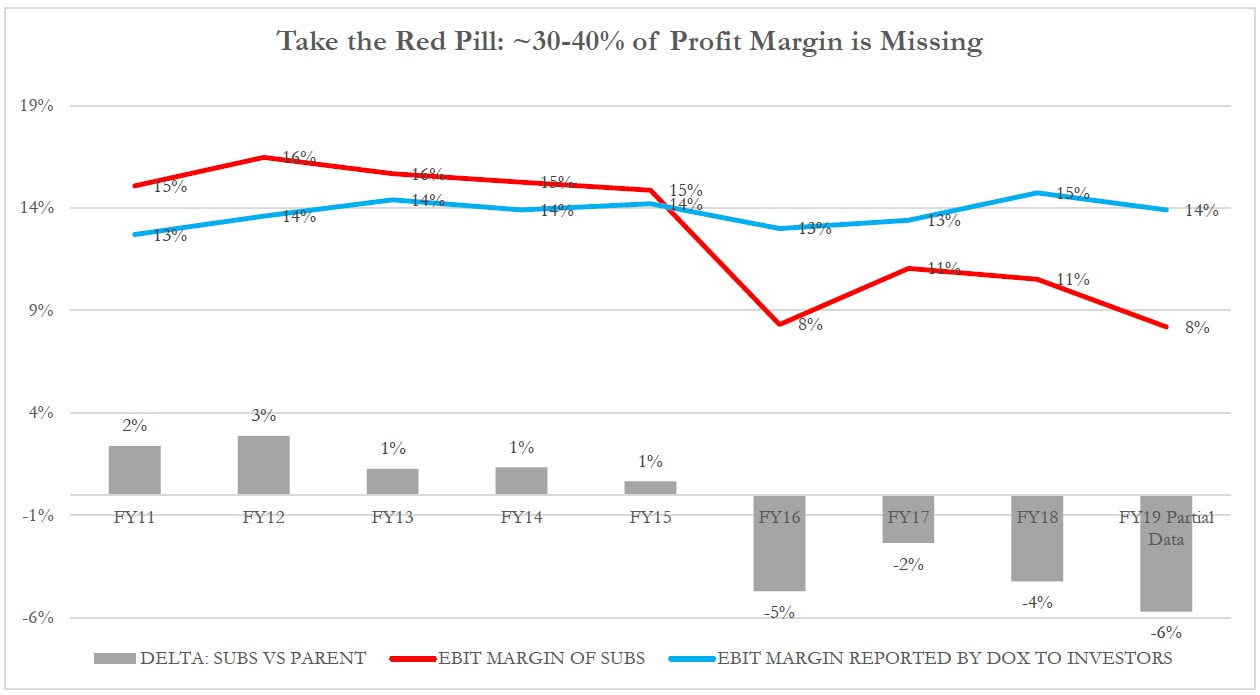 Former Employee Interviews Confirm Our Findings of Decline and Misrepresentation:

Amdocs is, ironically, perceived as a defensive name. It is also bizarrely expensive on an FCF basis compared to far-superior IT services companies such as Accenture or Genpact.2

Amdocs has been vastly overstating the profitability of its business in its SEC filings and presentations to investors, and it has been doing so for years.

Over a period of months, we’ve dug up dozens of Amdocs’ subsidiaries from countries around the globe and counted up their revenues, profits, cash balances, etc. We found that while there was once a relationship between these subsidiaries’ operating profit margins and the profit margins the parent company reports in its SEC filings, this relationship no longer holds. The parent margins have held steady, but the subs’ margins have been deteriorating for a decade. We believe this difference is irreconcilable and is due to accounting aggression.

The underlying reality of Amdocs’ profits is a far-lower-profit business than what’s represented to investors. This reality happens to coexist neatly alongside the truth of Amdocs’ business: It is an India-based, BPO/offshoring business that competes with other single-digit-operating-margin, BPO businesses. What we have found about Amdocs’ true profitability shouldn’t be shocking to anybody who understands what this company actually does. Of course Amdocs is not a mid-teens operating margin business and hasn’t been for a very long time; what separates Amdocs from the pack isn’t a better business model, but creative accounting to manufacture the appearance of much more profitability than its true peers. We estimate this “magically created profit” totals as much as $200m annually for DOX. 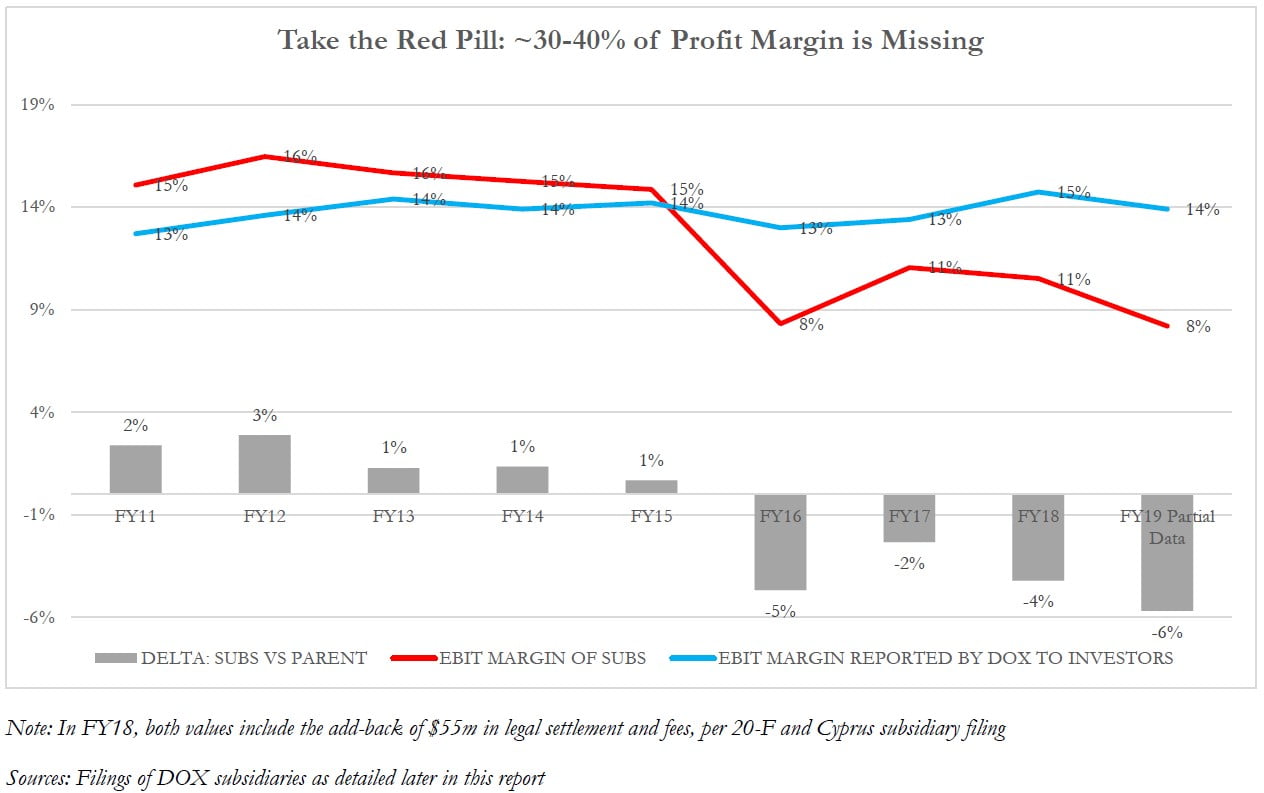 The red line in the chart above shows the truth about the business’ profitability – the “Desert of the Real” for Matrix fans. The blue line is the result of Amdocs keeping investors in Wonderland with accounting magic tricks.

The source for this chart above is as follows: 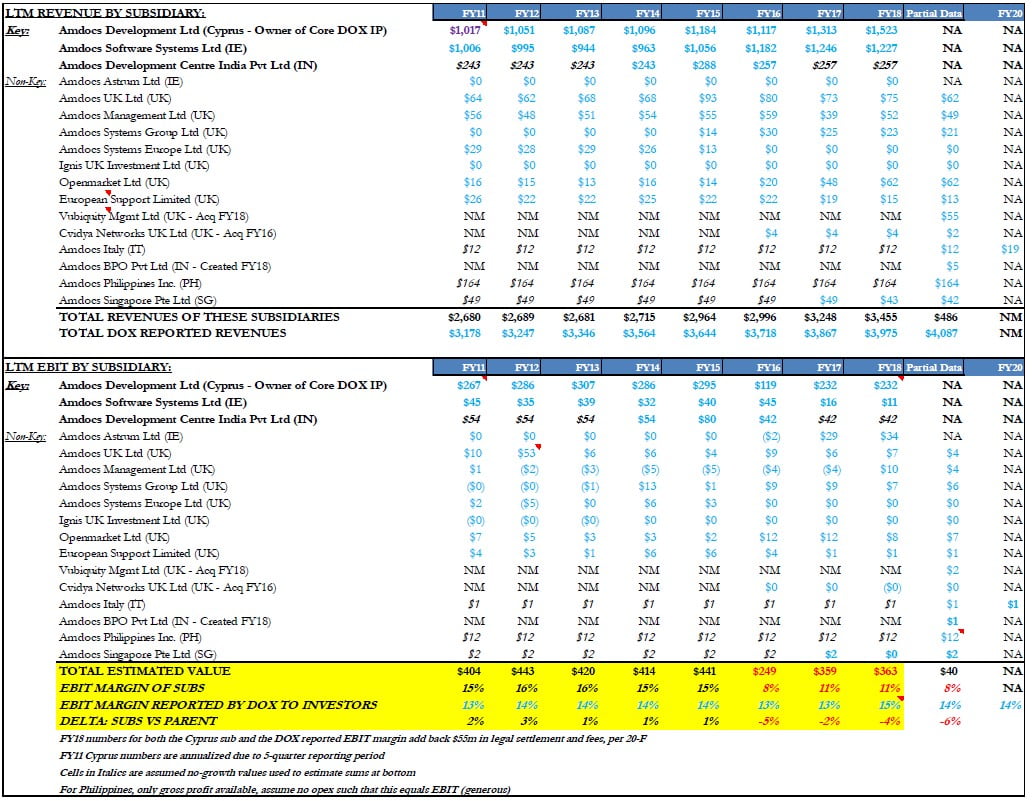 If we gross up the missing profit margin from the subs above, it implies ~$200m of EBIT overstatement by the parent company, or ~50%:

Let’s now walk through the appearance of Amdocs’ profitability, followed by the reality of its (far lower) profitability, and then look at some of the ways Amdocs has been able to create this mirage.

A. What we’re told: Amdocs has a “mid-teens operating margin,” magically outperforming its competitors

The “official story” is simply that which we see in the SEC filings: Amdocs is a stable, sleepy company with consistent, unremarkable margins for an “IT services” company:

Aside from FY18, when the company was hit with a one-time legal settlement charge and lost a couple points of margin, DOX has had remarkably consistent EBIT margins in the 13-14% range. In fact, holding aside the modest anomaly in FY18, DOX’s GAAP EBIT margin has been in this same 13-14% range in every year since 2006. Obviously, investors value this apparent consistency and predictability in DOX’s profit margins. And of course, we think that’s why DOX management has manipulated the numbers so aggressively to keep them looking nice and stable.