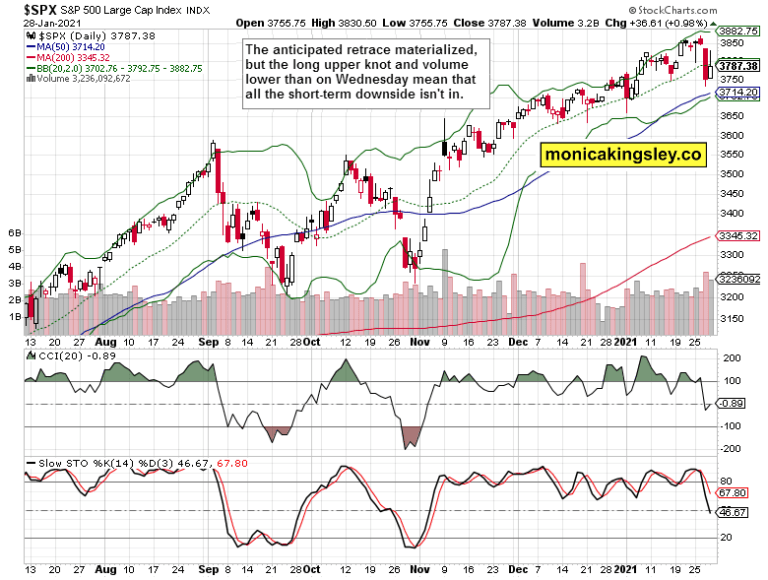 The reflexive rebound slowly but surely lost steam, rolling over into the close. The decline continued in the overnight session before a 3720-ish floor was established, indicating that the stock bulls are not yet out of the woods. It was indeed a good idea to take open long profits off the table yesterday for a quick 22-point gain in the S&P 500.

Earlier, I called for a reflexive bounce post the Wednesday selloff, followed by some sideways trading. Let‘s look at the charts, and update the unfolding game plan – would the charts still support stabilization as the most probable outcome over the next few sessions?

In short, the probability of more downside rather than selling having stopped, has increased (charts courtesy of www.stockcharts.com). 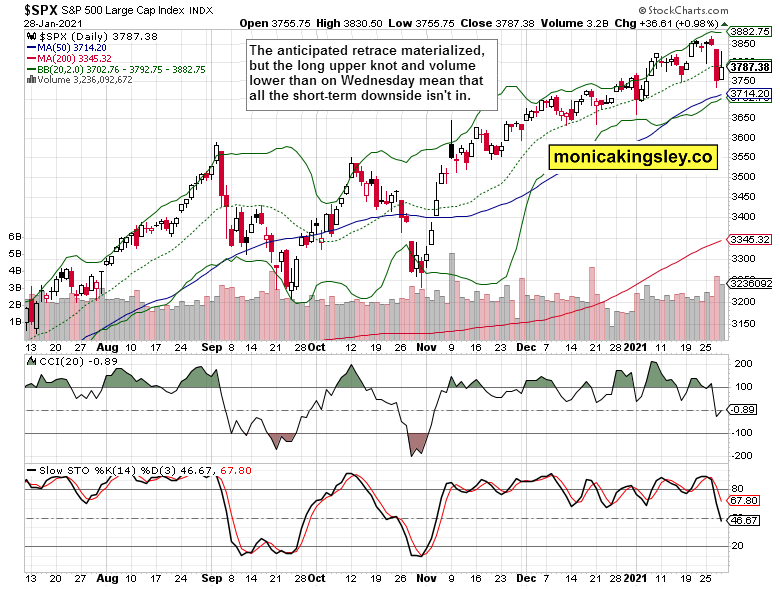 The sellers stepped in as the session approached the closing bell, and the daily volume was still lower than Wednesday‘s one. Not too shabby, but lower. My takeaway is that the selling hasn‘t ended yet as it‘s the bears‘ turn now. 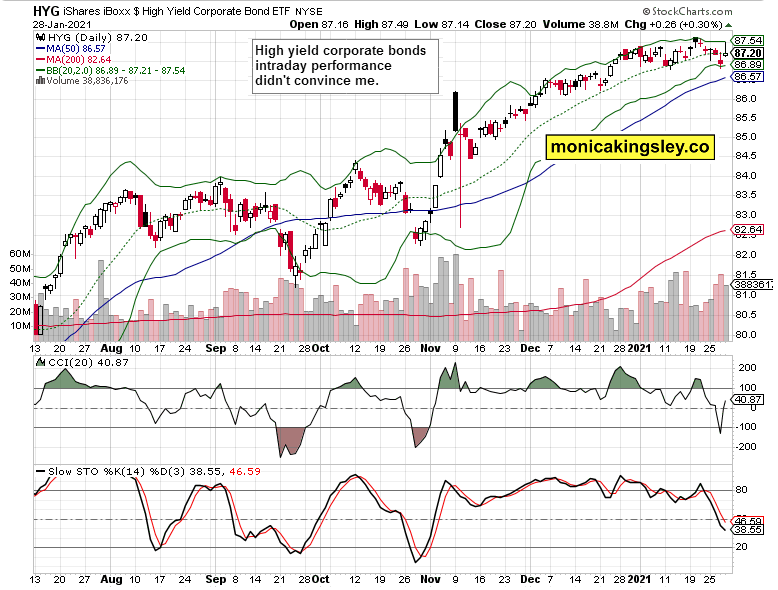 High yield corporate bonds (HYG ETF) retreated even more on a daily basis, almost revisiting the opening gap. That makes it impossible for me to present a short-term bullish case to you. Especially given that investment grade corporate bonds (LQD ETF) weakened – that would be expected if long-term Treasuries weakened as well (they did), but its the interplay of the three that warrants caution to me. 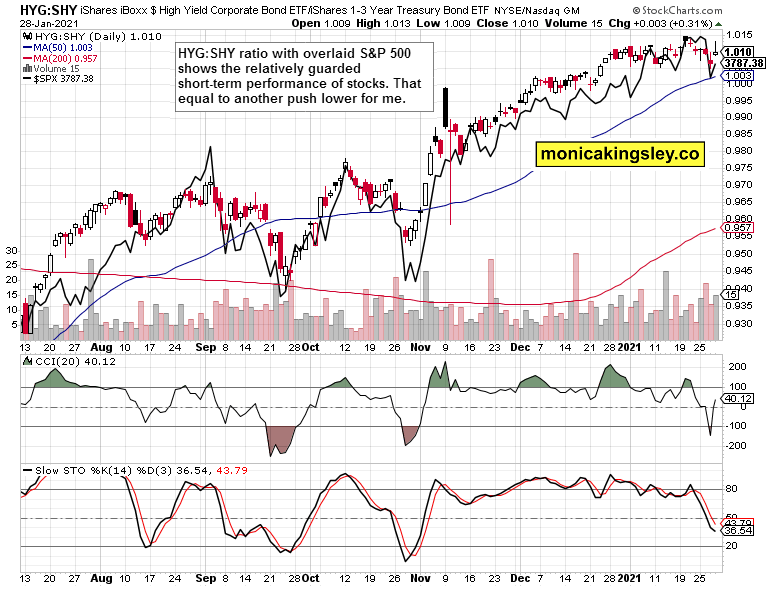 High yield corporate bonds to short-term Treasuries (HYG:SHY) are still faring much better than stocks, highlighting that we‘re in a risk-off environment right now, where even utilities (XLU ETF) or consumer staples (XLP ETF) have a hard time keeping up their daily gains. 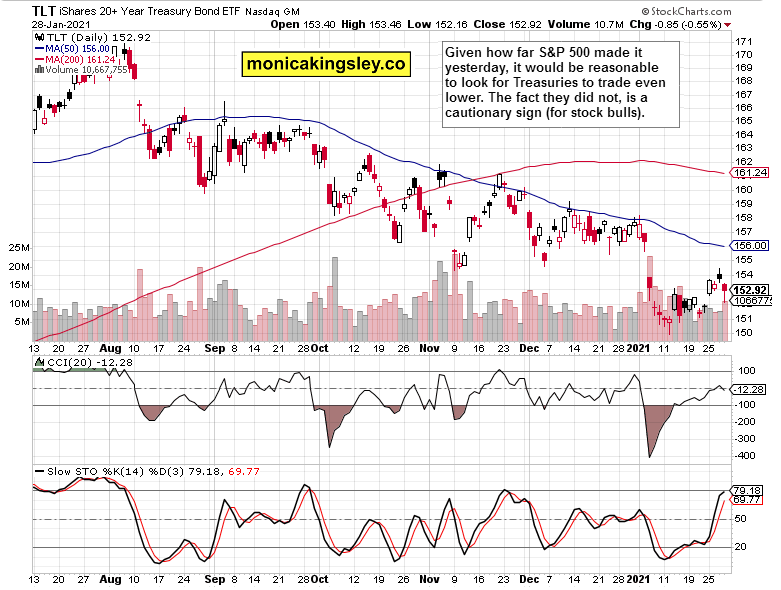 Here they are, long-dated Treasuries (TLT ETF). They have declined, right – but this move lower is a bit too moderate for my taste, and instead favors them to trade sideways to higher over the next few sessions. Such a move would be supported by the daily indicators as well, and stocks would have it tougher to score gains simultaneously. 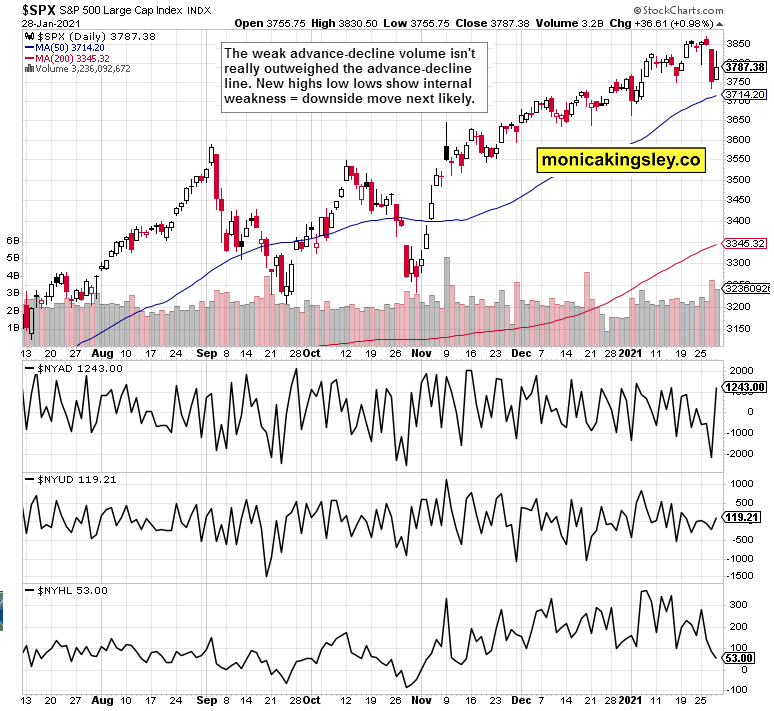 I am not dazzled by the advance-decline line, and rather pay attention to the tame advance-decline volume, and the warning inability of new highs new lows to recover at all. A bit more time and substance is needed for the price recovery to play out.

Volatility retreated but such a prior spike means that we aren‘t going to 25-26 range just right away. While the gyrations both ways aren‘t over yet, they are calming down. 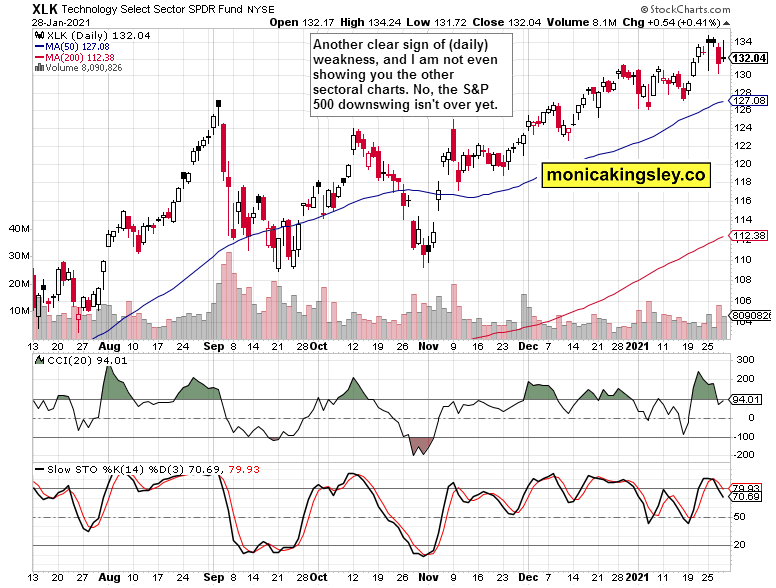 Technology (XLK ETF) retreated to where it opened, and wasn‘t among the best performing sectors. Financials (XLF ETF) and healthcare (XLV ETF) did better, and the same goes to a large degree for the emerging bull market trio of materials (XLB ETF), industrials (XLI ETF) and energy (XLE).

Gold in the Spotlight 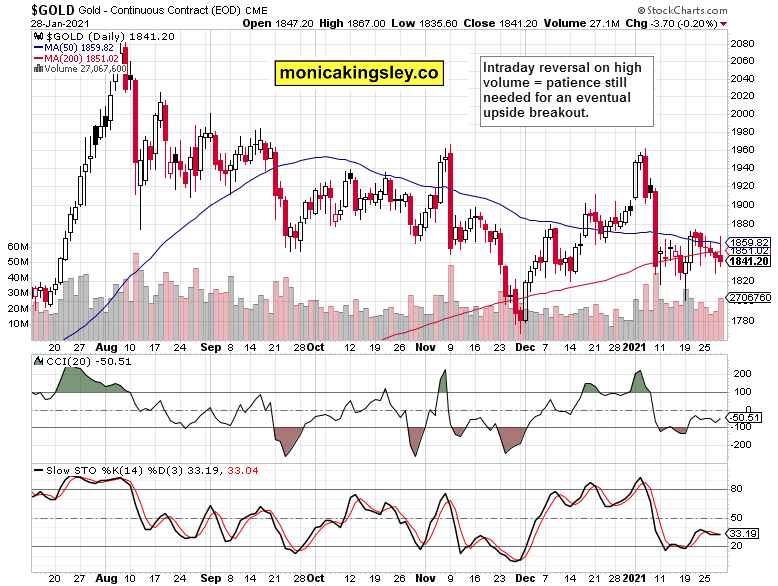 Daily reversal on rising volume that has a coiled spring feel to it. The daily indicators are relatively undecided though, and don‘t rule out another push to the downside. Still, the overwhelming character of this market is sideways for now, and should a bear raid come, it would have to prove its staying power first. The medium-term picture naturally remains bullish just as I laid the case for it both on Monday and Wednesday.

Having approached Wednesday's gap, the S&P 500 rally fizzled out yesterday. Pointing lower in the premarket, today‘s session is shaping up to be one of bottom searching and attempts to gain the upper hand by both the buyers and the sellers. It‘s that the market internals aren‘t at their strongest exactly, while volatility hasn‘t died down sufficiently, and Treasuries appear ready for a short-term upside surprise too. Make no mistake though, the stock bull market isn‘t over and this is not the start of a significant correction. Just remember my Monday‘s article, and brace yourself for a weak February.

Thank you for having read today‘s free analysis, which is available in full here at my homesite. There, you can subscribe to the free Monica‘s Insider Club, which features real-time trade calls and intraday updates for both Stock Trading Signals and the upcoming Gold Trading Signals.