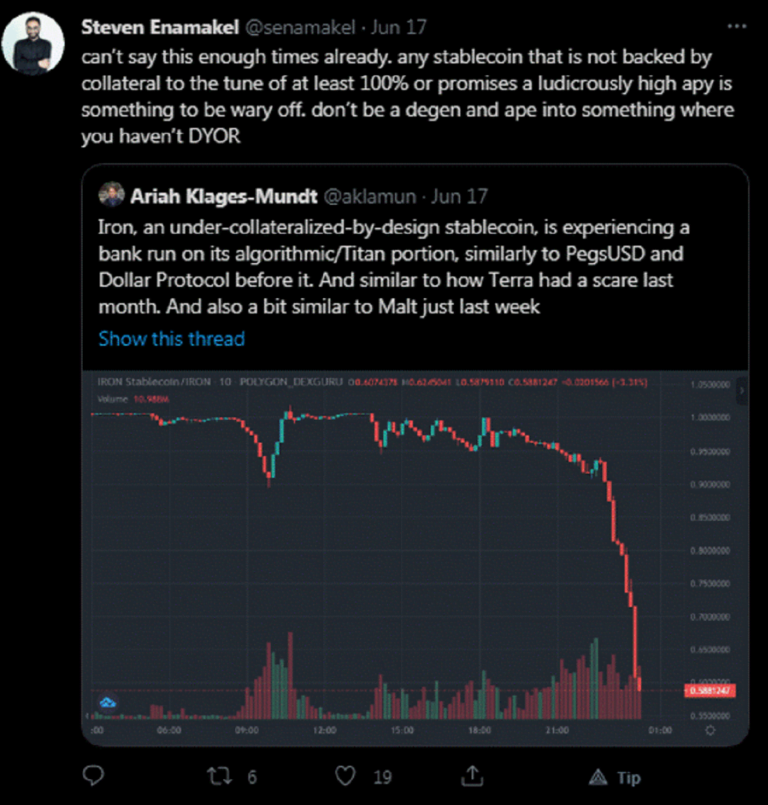 Like a racecar in reverse, $TITAN, the stablecoin of Titan Finance, crashed from $60 to $0 on Thursday. $2bn TVL was wiped out, including the investment of Mark Cuban. However, this was not a rug. The term “rugged by the people” has been floating round crypto Twitter: an irredeemable loss of confidence in the coin that drove the price to near zero. The people simply panicked and ran. One Defi founder – Steven Enamakel – thinks he knows why, and how to stop it.

The Problem With $TITAN

The problem was under-collateralisation. 70% of the stablecoin’s value was backed by stable collateral, the other 30% was volatile $TITAN. With a few big sells, the coin lost its peg. When under peg, the coin could be bought cheaply, redeemed for the underlying collateral and the $TITAN minted by this was continually dumped on the market. It was a whale’s game, driving down the price and making a return to peg impossible. A DeFi bank run occurred – the people had “rugged” and investors couldn’t exit quickly enough. 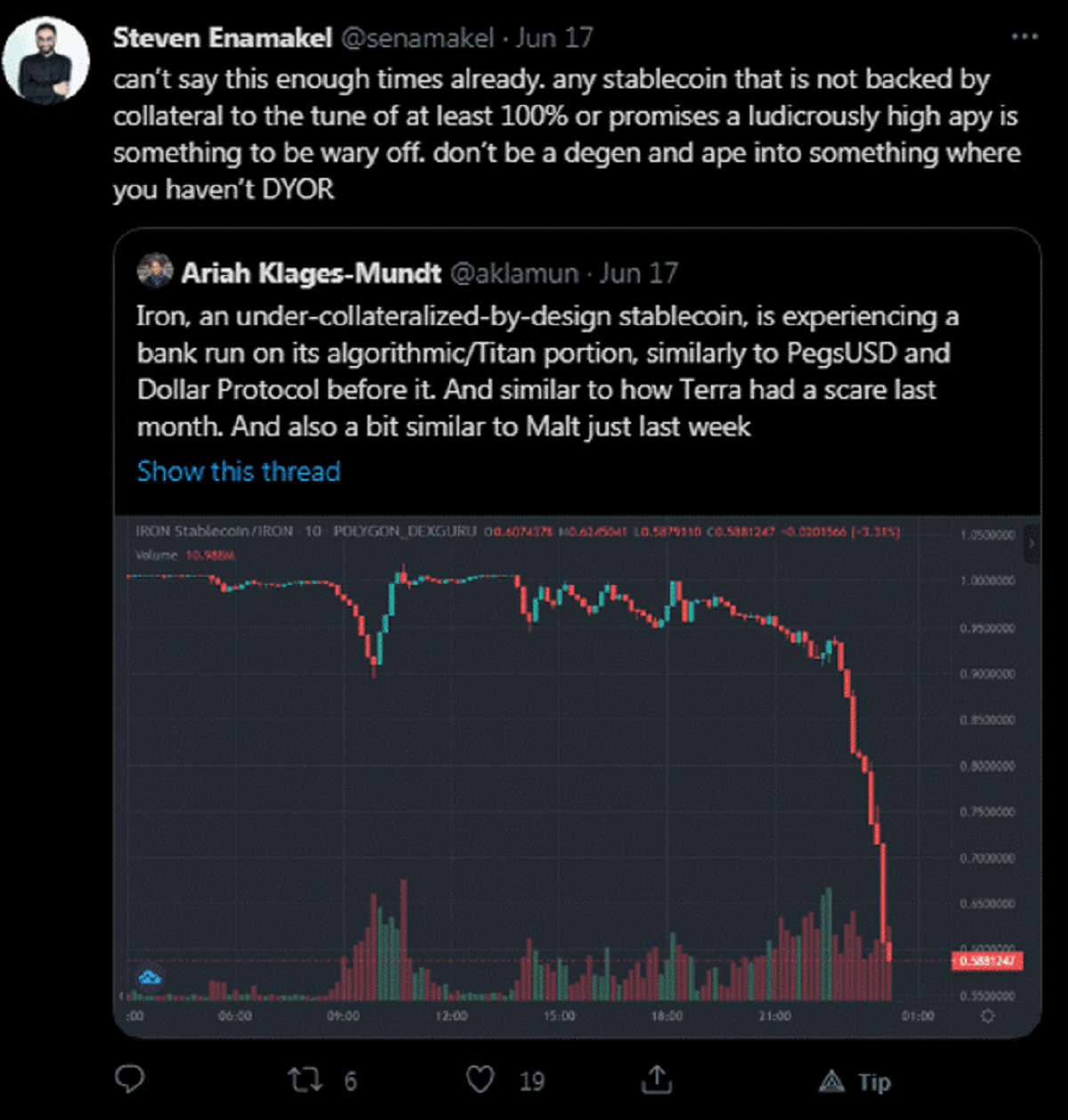 How could this have been avoided? The whole episode had been predicted by Steven, who thinks his team at MahaDAO have found the answer to stability. Mr Enamakel has been shouting from the rooftops for some time that the under-collateralisation model holds big risks in a bear market, and has urged other coins, such as $FRAX, to consider over-collateralisation. The coin would only be stable if the value of the volatile asset – in this case $TITAN – was maintained. Maha’s coin $ARTH, seeks to retain its algorithmic peg through an overcollateralised model, using organic APY’s and enticing users instead through rewards in a bonding curve sale for the genesis event on June 22nd. 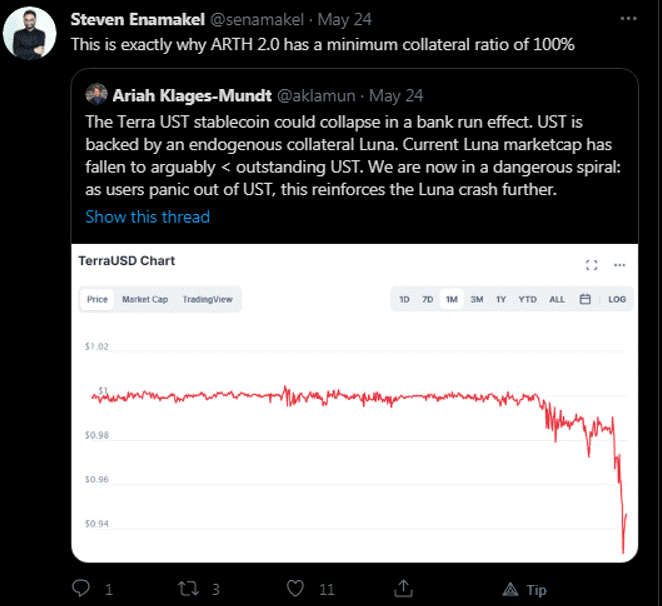 The worrying point for would-be investors is that other stablecoins seem not to have taken Steven’s warning to heart. “FRAX is a great protocol and it is quite innovative but it still suffers risks of a bank run or a Soros attack like any other undercollaterlized stablecoin”, Steven said today. “It could crash the protocol if the platform token (FXS) goes to 0. ARTH evolves from this idea of fractional reserve by being over-collateralized and allowiing the platform token (ARTHX) to help keep the protocol efficient.” With $1.10 available for redemption, the security backstop with $ARTH is set high. 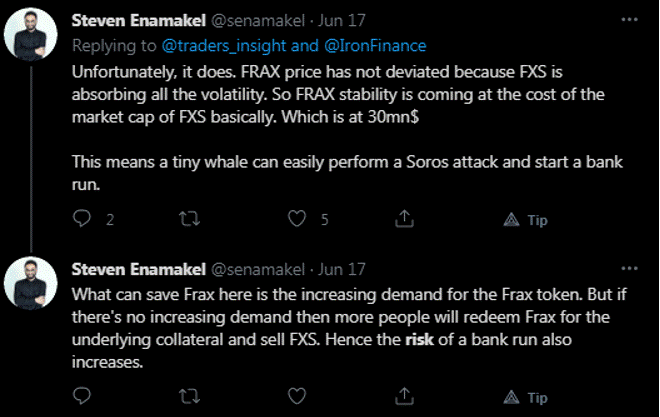 Why do we need another stablecoin? The answer is we don’t require another US dollar stablecoin: In fact, $ARTH a valuecoin. It is stable not to the dollar, but to the purchasing power of one dollar at launch. In a year’s time, your $ARTH “dollar” will be worth what one US dollar is today. For investors looking to hedge the dollar, such as Mark Cuban, that is likely to be a big deal. 40% of all dollars in existence have been printed since Bitcoin genesis, and with an expansion of the money base of $4 trillion dollars this year, the same cannot be said of the real US dollar, nor any stablecoin tied to it.