The latest smartphone from OnePlus has been surfacing on the internet over the past few weeks, and a recently posted photo has given us a sense of what we can expect from the OnePlus 6 price.

The new leaked photo, reported on by Technocodex and initially spotted by CNMO, gave us some key specifications alongside the OnePlus 6 price that has many excited about the release of the upcoming phone.

The image compares the OnePlus 6 to other flagships such as the Apple iPhone X, Samsung Galaxy S9 Plus, and the Huawei P20 Pro. Comparing it to flagships from more established companies like the iPhone X and the Galaxy S9 gives it some big shoes to fill, but it appears as if it may have similar specifications to its competitors. And perhaps with a lower OnePlus 6 price, it will be able to keep up with models like the iPhone X that are several hundred dollars more.

According to the photo, the OnePlus 6 price will be around $749, putting it right in the middle of high-end flagship prices. This is around the same price as the Galaxy S9, which may make it difficult for the phone to compete and capture the attention of a market that is currently enamored with the likes of Samsung and Apple. It appears as if the OnePlus 6 will have some impressive specifications, however, with a Snapdragon 845 process and an incredibly high 8GB of RAM. With 256GB of internal storage, you’ll also have more than enough space to store all your photos, videos, and apps. 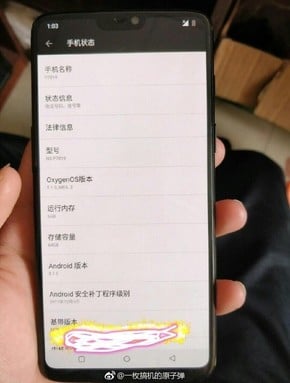 Speaking of photos, the OnePlus 6 price seems even more justified by the dual rear camera setup – featuring a 12MP and 20MP sensor. The front camera configuration isn’t mentioned in this most recent leak, but we expect that it will be competitive with offerings from the likes of Apple and Samsung. It’s important to keep in mind, however, that the most recent release from Samsung literally revolves around the camera. With a catchphrase like “The Camera, reimagined.” it’s going to be hard for the Galaxy S9 to be beaten by this relative newcomer.

We also get a sense of design from this leak, with a confirmation that the OnePlus 6 will feature an edge-to-edge display with a notch similar to the iPhone X on the top. The phone will ship with an on-screen fingerprint scanner and 3D facial recognition – a combination that we haven’t seen from the smartphone industry so far. Whether or not the facial recognition can compete with the innovative FaceID technology from Apple remains to be seen, but the addition of the on-screen fingerprint scanner may actually give it a bit of an edge over the iPhone X in the eyes of some consumers.

All in all, the OnePlus 6 price seems more than justified. The company has their work cut out for them if they’re to expect to see any sort of significant Western sales, but the price seems quite reasonable for all of the features being packed into this smartphone. Considering the Galaxy S9 accomplishes less for the same price, it will be interesting to see whether the OnePlus 6 price and features are enough to climb over the lack of name recognition and brand confidence that OnePlus has in comparison to Samsung.

The OnePlus 6 is expected to launch in June of this year.