The company is based in Switzerland, and reports earnings and pays dividends in Swiss Franks (CHF). I use the Swiss Frank as reporting currency for this analysis. But when converting for US dollars, be aware that there will be some fluctuations due to changes in currency rates. There is also a 15% withholding tax on dividends for US Taxpayers, which is taken at the source. Hence, it may be best to own these shares in a taxable account.

Nestle is an international dividend aristocrat, which has managed to increase dividends annually since 1995. While reviewing Nestle's dividend history, it looks like Nestle has not cut or suspended dividends at least since 1959, which is impressive. 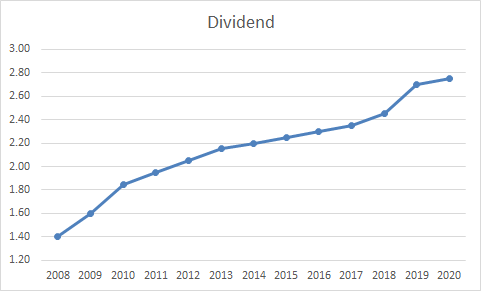 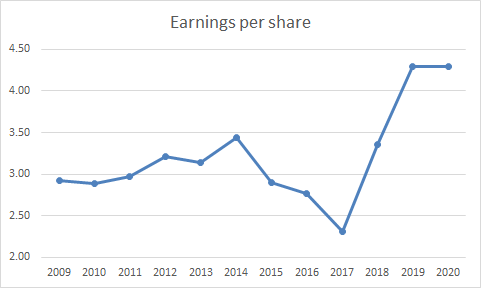 The thing that appeals to me with Nestle is the predictability of the food and beverage industry, in which Nestle is a leader. Demand for food and beverages is expected to grow in emerging markets, while remaining stable and relatively immune from the ups and downs of the economy. Nestle is well positioned to ride the increasing affluence of emerging markets with its strong presence throughout the emerging markets. In fact, 40 % of the company’s sales came from emerging economies. Understanding local markets and strategic acquisitions will be the key to future success.

The company is growing its ecommerce segment, taking advantage of a trend of consumers shopping online versus in store. This is a testament to the strong brands that Nestle has, which result in small repeatable transactions by consumers. The company’s business has been resilient and adaptable during the pandemic as well. This is the type of recession proof stock that could continue rewarding shareholders with raises for years to come.

The company has been able to generate strong organic growth in key areas such as North America, Europe and Asia through several factors. Some of them include product innovation, leveraging the company’s global scale, investing in building and maintaining the company’s strong brand positions worldwide. The company has 29 billionaire brands, which have delivered strong organic growth over the past few years as well. Nestle’s long term goal is to generate organic sales growth, achieve sustainable improvement in EBIT and improving the trend in return-on-investment capital. It has solid competitive advantages of scale, and reach of its distribution channel around the world. It has a portfolio of solid brands, which command premium pricing and which consumers are willing to pay for their quality. The company continuously invests in its brands, tries to innovate and satisfy emerging consumer trends, and adapts to the conditions in different market environments it operates in.  The company takes an active approach to its portfolio of brands, as it tries to enter attractive segments and exit those in which it lacks competitive advantages.

I like investing in boring companies, which are companies that have been around for over a century, and managed to survive and thrive amidst a variety of cataclysms. These companies are predictable, offer a product or service that customers crave, and quite often they are in a niche with a low chance of technological obsolescence. Technology changes may actually reduce costs, make production/marketing/distribution more efficient, and result in higher profits. These companies sell small, everyday repeat items to consumers, and become more valuable over time as they grow the business.

Nestle owns 23% of French cosmetics company L’Oreal. Check this article: If you had to own one company for a generation..

Nestle has also done a great job in buying back shares. Between 2009 and 2020, the number of shares outstanding declined from 3.572 billion to 2.849 billion. 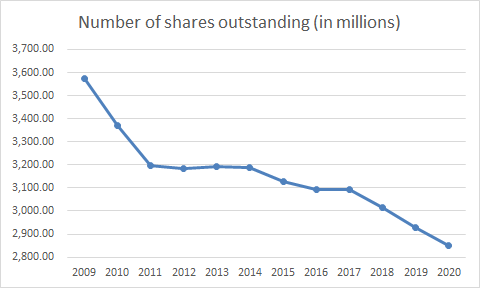 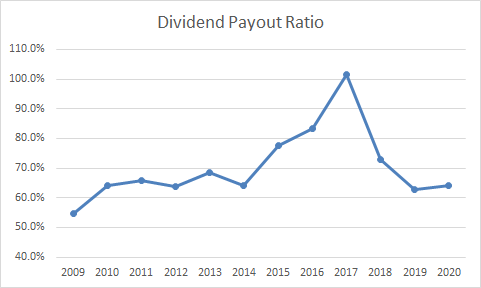 Nestle stock is not cheap at 23.70 times forward earnings, but it is a quality company that would likely be around for a while. If you asked me to put 100% of my money in one company, Nestle would be one at the top of my list. It has geographic diversification, a portfolio of strong brands, a long history of growing brands, a portfolio of products that are relatively immune from the short-term economic cycle and leading position in its various niches it operates in. The stock yields 2.65%.