ValueWalk
Home Economics Where is all the Managed Futures Money Going? The Top 5%

If you were to ask for the growth of Managed Futures assets in 2015, you might get different answers depending on who you ask. Barclayhedge will tell you $8.5 Billion, we think that number is more about $10.5 Billion, and a third party recently made the claim of as high as $30 Billion at a recent conference. Being the Managed Futures nerds that we are, this certainly caught our interest.

We’ll take the speaker at his word and assume those numbers were based on some hedge fund inflows report or another – but it got us to thinking of how much of the total assets (not just inflows) are controlled by the largest firms. Back in 2013, we discovered the 35 largest CTAs controlled 65% of the AUM, and it turns out it’s only gotten worse.

To find the answer this time round, we took all of the managers in the Barclayhedge managed futures database that have reported returns in 2016, then removed distinctly non managed futures hedge funds ,aka Bridegwater, to arrive at a universe 263 managers controlling 733 programs. We then summed up the assets to see just how top heavy the space is. 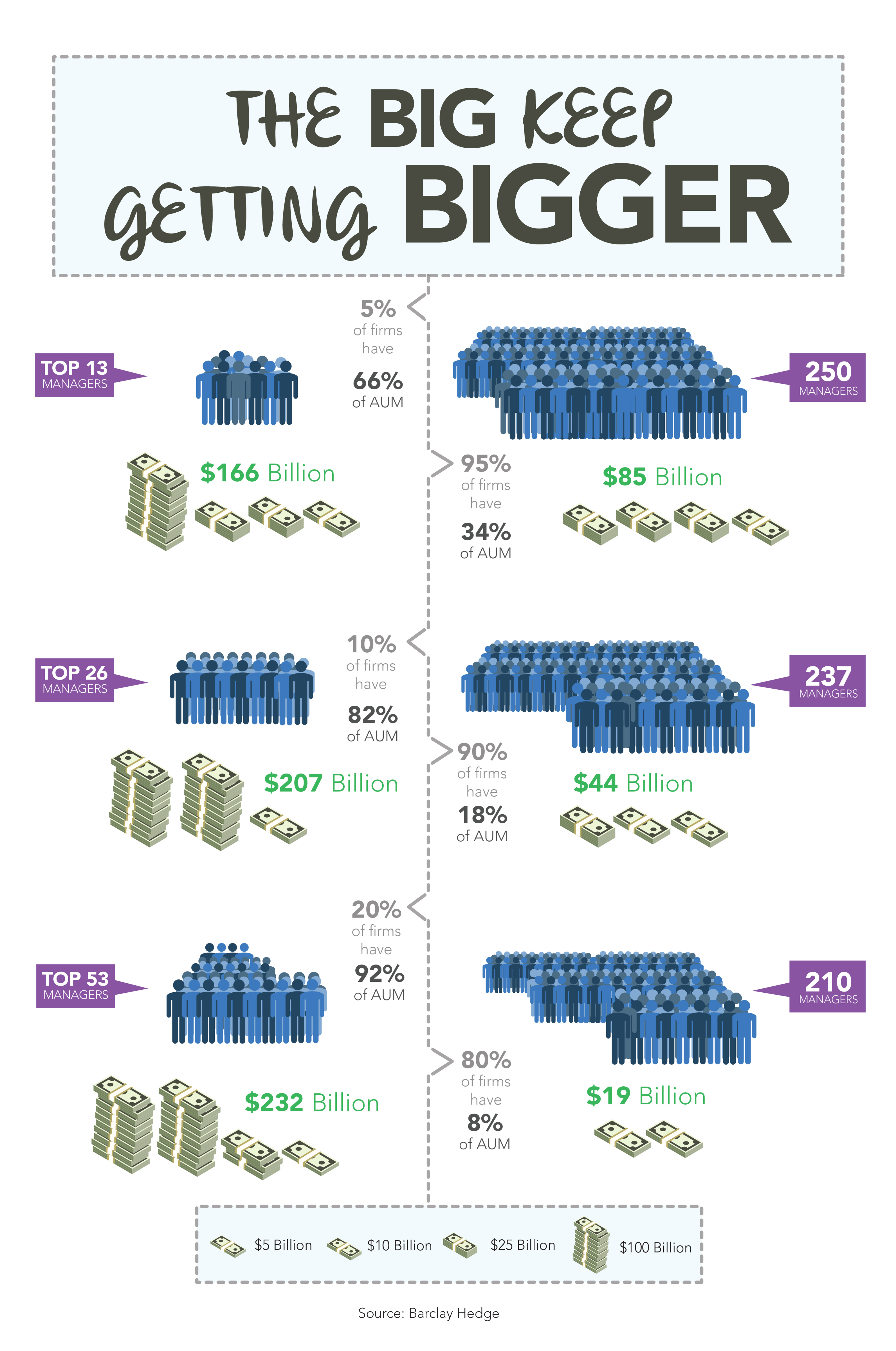 This isn’t a new problem… but it does seem to be getting worse, with the largest managers checking the right boxes to get the largest allocations in a self-fulfilling circle, leading all the way to the bank. Investors, meanwhile, may be doing themselves a disservice in boxing themselves into a smaller and smaller universe of managers who can meet asset thresholds and stringent operational due diligence tests, forgetting perhaps – that bigger is not better in the managed futures space – with bigger leading to problems in terms of market impact, position limits, and tradeable markets (larger managers portfolios tend to be more heavily skewed towards financial instruments away from commodities).

At the same time, we’re hearing from more and more investors that they desire emerging managers and the often higher returns they can offer (even if it comes with a wider dispersion of returns – more on that in an upcoming whitepaper).  But that’s not what’s happening according to the stats. According to the stats, that seems to be just lip service and a ‘wish’ of large investors instead of an actual allocation plan.

For now, we seem destined to watch the largest managers continue to get larger until…. something like – closures, performance flattening, underperformance due to financials exposure, etc – happens to shift investors wallets, not just their mindsets.