ValueWalk
Home Stocks Look Ahead To FTSE 350 Companies Reporting From 29 March To 2...

“Unlike rivals such as Fevertree or Coca-Cola, IRN BRU maker AG Barr’s products are not especially popular in bars and restaurants. Instead, most sales come from retail stores. This has meant bar and restaurant closures during lockdowns have had a more muted impact on the group than on some competitors, though cocktail brand Funkin has seen sales hit hard.  However, as fewer of us have been out and about, on-the-go impulse purchases have fallen and those usually account for about 40% of sales. AG Barr will need these sales to return as society normalises, so commentary on recent trading and brand strength will be of particular interest. AG Barr said in a trading statement that revenue is expected to be around £227m, compared with £255.7m last year. Operating margins are expected to be roughly equal to last year, meaning operating profit will be better than markets had expected. Given margins of 14.9% last year, this means operating profit should be around £34m. However, there are sure to be several underlying items in the books, such as write downs and a one-off, as-yet unknown, compensation payment for the termination of AG Barr’s agreement to distribute Rockstar in the UK.”

‘’Royal Mail not only had a bumper Christmas but demand for its services has continued to snowball. Revenues have been even better than expected since its February 11th trading update with management expecting underlying operating profits at around £700m, compared to previous guidance for over £500m. The launch of its Sunday delivery services is clearly an attempt to capitalise on the momentum provided by the e-commerce boom and the renaissance in letter writing has been an added bonus after declines last year. The huge upsurge in demand left the system creaking in December despite the influx of 33 thousand temporary workers. However investment in parcels infrastructure is rising - with construction of a new, fully automated parcels hub in the Midlands capable of sorting over a million packages a day. Agreements with its unions have also helped soothe long running industrial tensions. The easing of lockdowns might slow the surge in volumes but given e-commerce is clearly here to stay, Royal Mail is wisely preparing its posties for a parcel led future.’’

“Pennon Group’s trading statement is unlikely to set the pulse racing, if it sticks to group trading. Pennon’s water business is highly predictable and rarely delivers much by way of surprises. However, having sold their Viridor recycling division for over £4bn last year, Pennon is looking for deals in the water industry. Pennon’s name has been linked to a few, most strongly to Southern Water, but so far nothing has come to fruition. If the group are now ready to announce how those Viridor proceeds are to be deployed, then a likely rather dull trading update could quickly become very interesting indeed.”

“Next week’s trading update will be the first major update from Imperial Brands since full year results last November. Demand for tobacco was unsurprisingly yet depressingly resilient in a year when a respiratory disease brought the world to a near standstill. Imperial Brand’s tobacco volumes fell just 2.1%, which is a smaller fall than the year before (-4.4%). Thanks to continued price increases revenue rose year-on-year. We expect this slow volume decline to continue, and Imperial is guiding for an increase in full year operating profit thanks to sustained strong pricing. A departure from this trend in the core tobacco business would be surprising. Perhaps more interesting is the performance of Next Generation Products, like vapour or heat-not-burn. These could be a growth engine in an industry with an otherwise uninspiring long run prognosis, but Imperial’s early performance has been disappointing. There are some signs results may pick up, but expectations have been recalibrated and we’re keen to see what early 2021 has brought.”

“Can Next keep the momentum going in their Online division? So far, Next’s strength in Online has served them well during the pandemic and the group ought to be benefiting from competitor closures. Investors will be looking for guidance on how the group sees the High Street faring once non-essential retailers are allowed to open their doors once more.  Will lower rents be sufficient to keep strong retailers stores viable, or is the online shift set to continue shuttering High Street names even as they prepare to reopen their doors? Last year PHP released a trading statement at their AGM on 1 Apr. This year the AGM is not until the 18th and the group’s financial calendar does not clarify, nor did they make a statement in late March or early April in 2019. So I’m happy to comment on them, but I don’t think it is coming up for two or three weeks.” 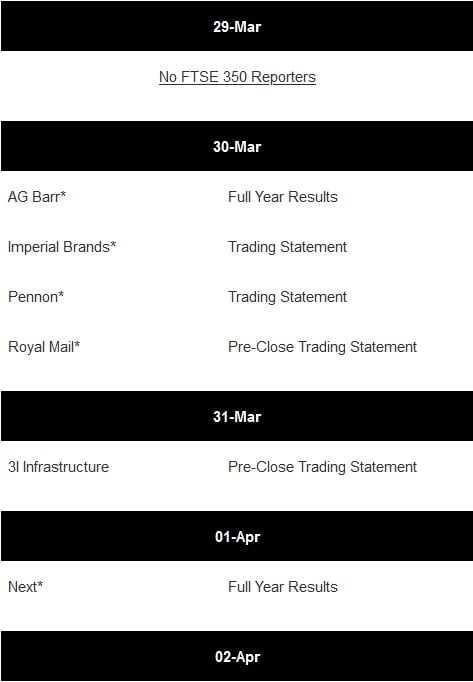 *Companies on which we will be writing research

Our purpose is to empower people to save and invest with confidence. We want to provide a lifelong, secure home for people’s savings and investments that offers great value and an incredible service, and makes their financial life easy.

Clients rate our service highly, 90% say we are good, very good or excellent.

Our expert research has been helping investors for almost 40 years through thick and thin – we’ve seen many market downturns.

We make things easy – it takes just five minutes to open or top up an ISA. More clients log into their accounts via our mobile app than through a desktop PC.

In 2018 we also launched Active Savings, an online savings marketplace that lets savers move money easily between banks, to help their money work harder without the hassle.

Our helpdesk is based in our HQ in Bristol. We have a tech hub in Warsaw Poland and around 100 financial advisers based across the UK. We are a financially secure, FTSE 100 company.